10 Takes on Ebola from around the Globe: Cautionary Tales and Views from HCPs

With the ongoing Ebola crisis continuing to rise to even bigger global proportions (in terms of collective dialogue at least) due to a growing death toll, the cycle of interest from the media has now entered a phase of re-examining attitudes towards the outbreak and measuring them against the actual scientific risk of an individual contracting the disease. The cycle of hourly instant news about the virus and how to protect ourselves from it still continues to run in the background of course. There is now however an added layer of inquisitive demeanour: the number of media-savvy members of the public is bigger than ever, so how can we help one another look at the issue in a critical way? While preventative measures and hard numeric data are being published and re-updated on a regular basis by different organisations and media outlets, we are still asking ourselves whether and what we can learn from the conversations healthcare professionals are having on open social media networks.

As we analyse tens of thousands of tweets from physicians, nurses, and infectious disease experts from around the globe, we realise that we as members of the public may not be privy to subtle bits of information that these healthcare professionals take into account when expressing an opinion on public social media. When there are so many parties involved, it is difficult for members of the public to get deeper insights into the complex context of how the outbreak happened and what is going to come next. There are local, logistical, economic and political factors at play that have only made themselves known to medical professionals who may be thoroughly involved in either hands-on prevention and treatment, or else various awareness campaigns taking place in regions still unaffected by the haemmorhagic virus.

Here are, then, 10 takes on the situation from healthcare professionals in 10 different countries (taken from conversations happening during the last 2 weeks), expressing informed views with regards to where the crisis is heading, and how the interplay between causes and solutions manifests itself in different situations.

Below, Ireland-based nurse Nuria Macia tweets a link to a blogpost calling against quarantining every health worker who has travelled to West Africa. 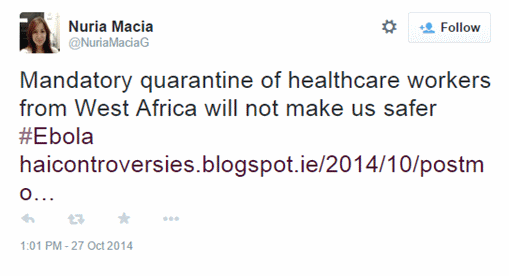 The link is to a blog post on a blog about the prevention of hospital infections, specifically controversial issues affecting the matter. The blog entry raises the question of whether quarantining healthcare workers for no substantial reasons may be a politically motivated decision. 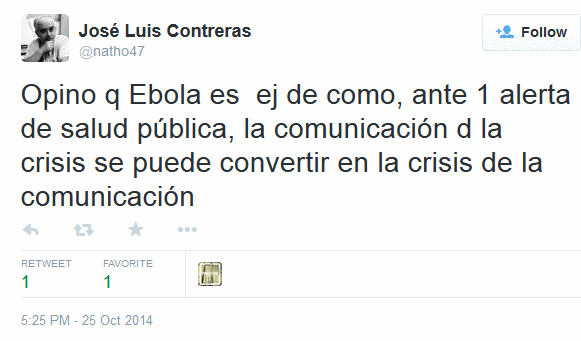 Sindi Van Zyl, a South Africa-based HCP, tweets about the current phase of the outbreak and how the epidemic will reach bigger proportions before it dies down. 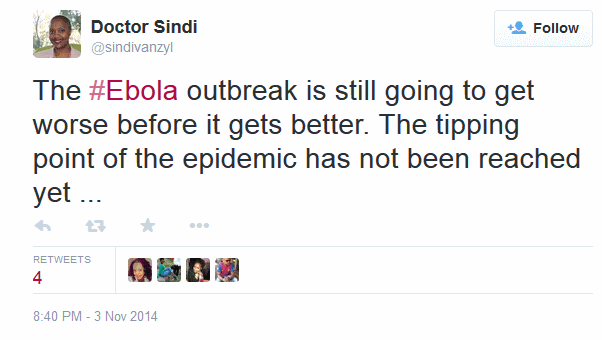 In Nigeria, pharmacist and journalist Dr. Kemi Omololu-Olunloyo responds to another Twitter user calling for ‘religious contacts’, emphasising the importance of fighting back using medical methods. 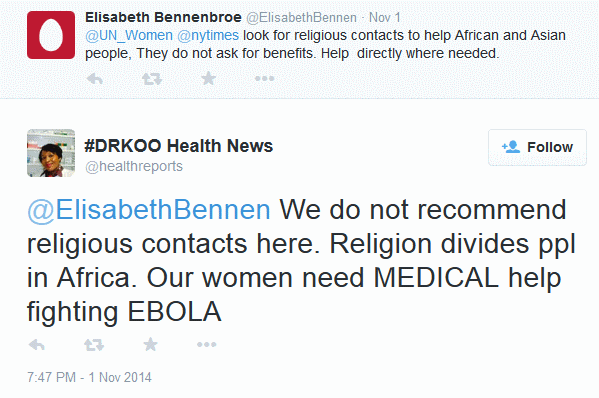 NZ-based Sudhvir Singh, a Medical Registrar in the country, tweets about the dangers of Ebola becoming endemic to Africa. The second part of the tweet suggests that he is critical of the panic with which some travellers are treated, even if asymptomatic. 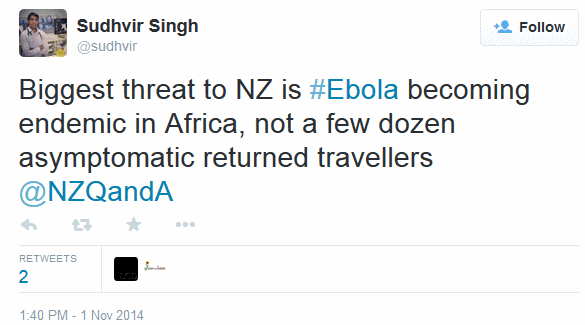 In Malaysia, Dr. Dhesi, a HCP affiliated with the Ministry of Health, and founder of the Malaysian Medical Gazette, calls attention to a neglected topic: dengue fever, encouraging global media to carry on reporting about it in spite of media interest around it being much lower. 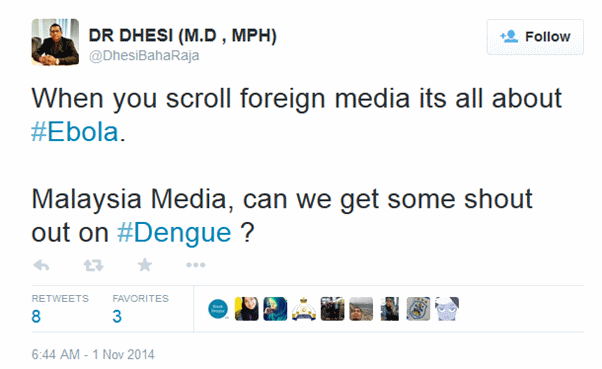 In Canada, HCP Jason Anthony Tetro, who has written a book about germs called ‘The Germ Code’, asks his network about the case fatality rate of ebola (CFR) being questioned, as well as predicting that next week, asymptomatic patients will be a big topic in the collective public debate. 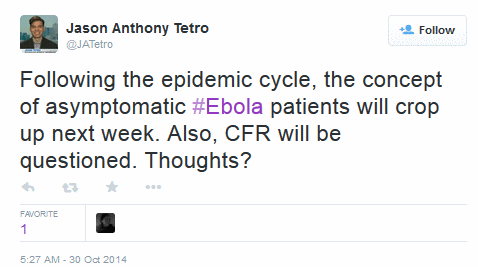 In Brazil, Carlos H Casartelli, a paediatrician from Porto Allegre, tweets about a suspected patient in Brazil, confirming that they have been discharge following a malaria diagnosis. 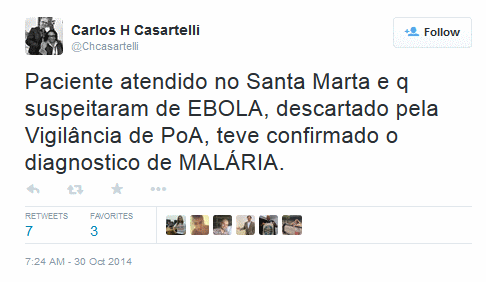 The recent Ebola outbreak may be one of the biggest epidemics in recent history, but it is also the first time we have got a wealth of digital resources at our disposal to help us learn about how to protect ourselves from it. Although in many places we have long surpassed the prevention stage, discussions amongst healthcare professionals on open social media networks can help highlight issues such as other epidemics/outbreaks being neglected, the dangers of mass panic and misinformation, and the way in which healthcare workers are treated when and if suspected of having Ebola. Watch this space for more updates on doctors’ conversations around Ebola in the next coming weeks.