Throughout October, we have been monitoring global HCP conversations related to the ongoing Ebola virus outbreak in order to uncover the issues doctors care about. Two weeks ago, we found that conversations around the not yet available preventive vaccine were somewhat divisive. Prior to that, the biggest issue on doctors’ minds was the risks healthcare workers were exposed to whilst caring for infected patients, with HCPs discussing problems to do with in-hospital workflow, and failure to communicate vital information to colleagues.

The internet is awash in conspiracy theories arising from misinformation about the outbreak, comments condemning individual doctors, health authorities, and even US president Barack Obama. On Twitter, various companies and organisations have even attempted to sell a miraculous cure to the virus to panicked members of the public, with the FDA responding to this practice by issuing warnings to the users in question. There is no officially approved cure for the virus yet, but the attempt to capitalise on the public’s fear of the virus has happened with previous public health emergencies such as swine flu.

The crisis is currently making major waves in every major media outlet, having reached full headline status, and even being ranked almost as dangerous to Americans as ISIS in terms of threats.

Since our last report on the outbreak, there have been 74 000 mentions of Ebola related keywords in global conversations between HCPs on Twitter, which is the channel HCPs have used most in an interactive, conversational manner during the public health crisis. The tweets taken into account begin on the 10th of October, meaning that the conversations below cover a period of two weeks, with an average of just over 5200 tweets a day coming from healthcare professionals around the globe.

When a news topic turns as viral and as explosive as the story in question, some might argue that taking to a resource such as Twitter might hinder clear communication, especially at a time when members of the public might be confused and perhaps unknowingly passing on misinformation. It is however perhaps more important than ever to be able to isolate the voice of those whose profession is to provide health care to communities, and see what their messages to the public, and to each other are.

First let’s look at the day-to-day volume graph below and see whether peaks and troughs can be correlated to developments related to the outbreak.

Day-to-day volume of conversation between HCPs on the topic of Ebola. Source: Creation Pinpoint.

On October the 15th, the news of a second US nurse potentially being infected with Ebola broke, giving rise to questions about why the CDC had allowed the nurse to fly the day before, overlooking the fact that she was suffering from a low-grade fever. 10% of all mentions on the 15th of October talk about the CDC, either sharing news or statements from the organisation or being critical of the decision that had been taken a day before. Overall, the tone of the conversation around CDC is a generally critical one, with HCPs such as Melissa Clouthier, a Texas-based HCP, questioning the reasoning behind CDC measures. 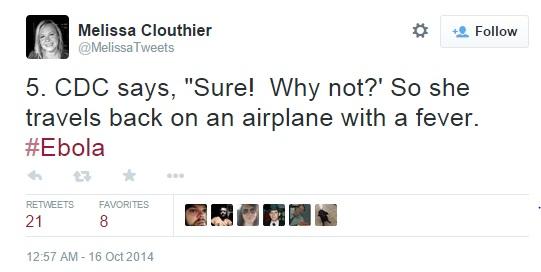 Similarly, below, US-based nurse Andrew Lopez tweets a link to a popular CNN video, asking HCPs in his network whether they are comfortable following CDC procedures, knowing that the protective equipment provided is not 100% safe, as shown in the video by Sr. Sanjay Gupta. Nurse Lopez uses the hashtag #nursesfightebola, which has been used by both members of the public and nurses/HCPs to post about Ebola-related safety measures and changes in hospital policy.

Looking into the biggest stories on the 16th of October, which was another peak in terms of HCP conversation volume, we have found that a significant part of the conversation was driven by US-based HCPs who were discussing the lack of a travel ban on Obama’s part, and the possible repercussions this might have on the development of the outbreak. Below are a few examples of tweets related to the travel ban from HCPs, as well as a topic cloud of the most frequently mentioned keywords on the day. 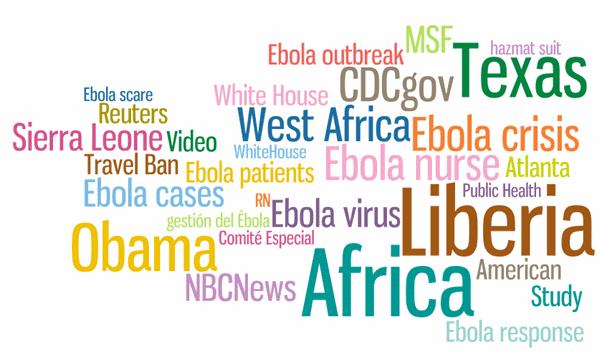 Looking at the topic cloud above, we can start to see topics such as ‘travel ban’ appear. The topic cloud also contains a few Spanish words, which is due to Spanish being the second most used language amongst HCPs.

It looks like some of the debate happening between HCPs on this day was somewhat politically driven as well.

Below, two HCPs’ tweets – one sharing a link to an Atlantic piece arguing against the travel ban, and another sharing news about Congressional Democrats opposing the ban. 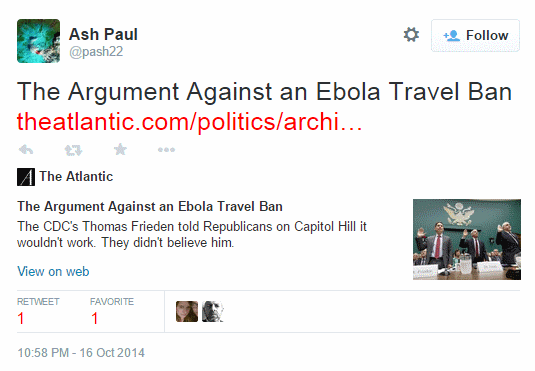 Among all the clinical discussions and debates, as well as sharing of news on the microblogging network, a couple of links stood out as being the most re-tweeted.

One was a link to the White House page which explained what steps the US government is taking to limit the spread of the infection, as well as what practical infrastructure and facilities have been put in place to diagnose the virus and manage potential patients. 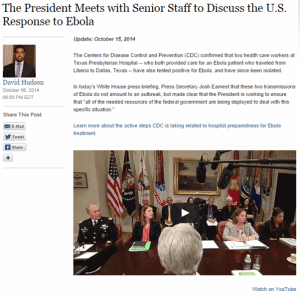 The original tweet from the White House includes a comment about how Ebola is NOT spread through casual contact, food, or air, which may have triggered the high number of re-tweets as HCPs try to inform their peer network (which may include patients and members of the public) of facts to do with the virus. 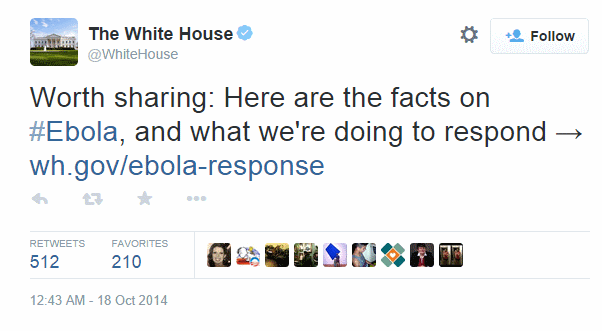 The tweet was also accompanied by a short Vine video, also detailing misconceptions about how the virus is NOT spread (ie. through air). 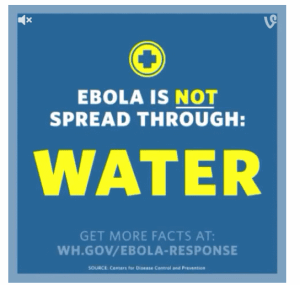 The other most re-tweeted story was a link to a WHO press release that discussed the difference between the way the outbreak is being managed in different countries. This follows an announcement made by WHO, who officially declared the end of the outbreak in Nigeria and Senegal, . By contrast, in Liberia, Guinea and Sierra Leone, the virus is still not under control. As the press release itself states, WHO is hoping to provide encouraging news in a landscape of panic and confusion by announcing that the virus can be fought back in a proactive manner. 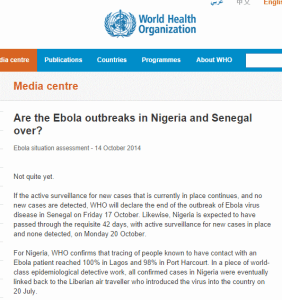 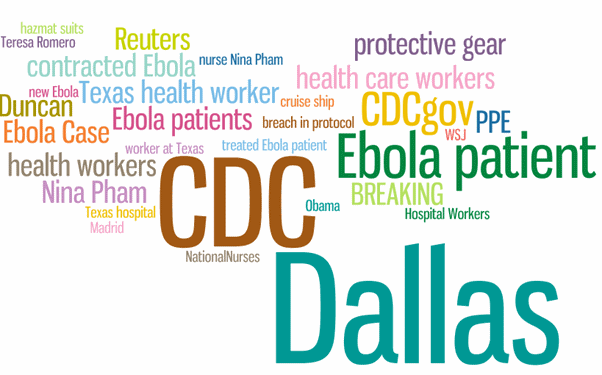 As doctors carry on discussing what is the biggest and perhaps most unpredictable outbreak in recent history, we have been paying attention quite closely to what HCPs based in Africa had to say, and how they were using social media to communicate with their colleagues across the continent, and ultimately, across the globe.

Amassing a total of almost 1500 mentions throughout the study period, Africa-based HCPs have been tweeting about a variety of Ebola-related subjects, from vaccine trials to Kenya’s Ebola status.

Below, a member of the public tweets the Kenyan president, urging him to take preventative measures against the outbreak. In response, a Kenya-based HCP informs Julie (@JuliGichuru) that Kenya has actually been sending medics and epidemiologists to Liberia (one of the worst affected countries in West Africa) to collaborate on stopping further infections. 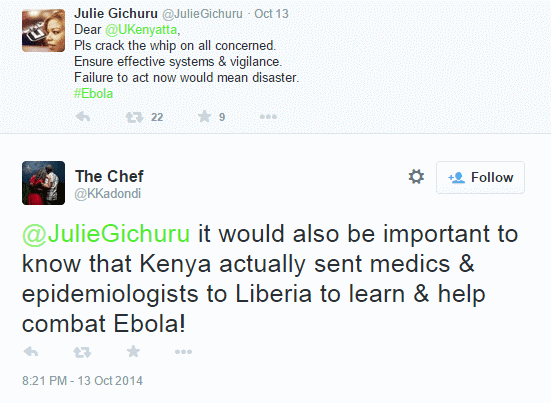 The top 5 African countries we saw tweets coming from were:

Nigeria produced the most mentions during the study period, as the country has been highly proactive in combating the spread of misinformation and keeping the public informed with regards to how to protect themselves and how the virus spreads.

It is encouraging to see how social media initiatives can make a positive change in terms of correcting public behaviour for the better – watch this space for an article from my colleague Stefan on the way Twitter is being used in Nigeria to make a difference through timely alerts.