With the American Diabetes Association congress happening last week, there has been lots of discussion online among healthcare professionals about diabetes, including debates around diet improvements and their potential to lower risk, cardiovascular risk factors and links to conditions such as depression. Participants in the congress included patients and healthcare professionals, and discussion around the event spread worldwide via Twitter using the hashtags #2014ADA and #ADA2014.

The topic of social media in diabetes care was included in the online conversation, with the UK’s Dr Partha Kar sharing resources and research online including our own study, Digital Opinion Leaders in Diabetes, which you can read here. Dr Kar, who runs a blog about his work as a doctor working in diabetes, also tweets a link to a study that talks about online resources as a way of empowering diabetes sufferers: 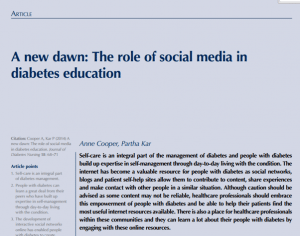 Independent UK diabetes training company @SuccessDiabetes then replies to the tweets in agreement, acknowledging that, at times, clinicians can be negative about the use of social media.

New York-based psychologist Dr. Eliot Brenner was another prominent HCP to tweet from the event, sharing the results of a T1 diabetes Exchange Scientific Session taking place at the event, as well as tweeting about Lexicon Pharmaceuticals, who had just presented data on a new diabetes drug, LX4211, at the event. LX4211 is a dual inhibitor of SGLT1 and SGLT2 that is going to be first in its class.

Dr. Brenner also shared some of the findings from the scientific session with @KellyRawlins, the editor of ‘Diabetes Forecast’, an American diabetes magazine. 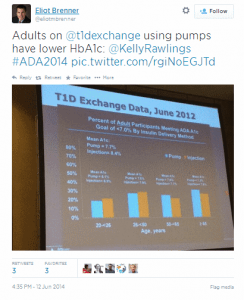 Spain-based endocrinologist Manuel Botana was also tweeting about the developments happening at the congress. Dr. Manuel tweeted that he was attending the event’s ‘Evidence Supporting New Diabetes Nutrition Therapy Guidelines’ session but expressed his scepticism about the claims’ independence: 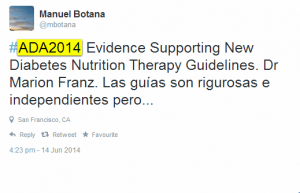 “The guidelines are rigorous and independent, but…”, reads the tweet.

Vascular and endovascular surgery expert Joseph Mills wonders if the statistics presented at the congress are an indication of the American healthcare system to prevent diabetic foot complications and provide adequate outpatient care for them. The statistics presented claim that 81% of patients who present foot ulcer symptoms at the emergency department are admitted. 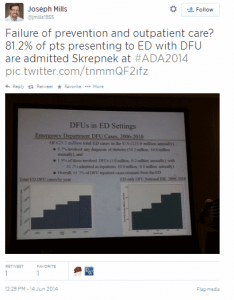 The statistics are part of a study presented at the congress on the topic of the clinical and economic burden of diabetic foot disease. The study is a collaborative effort between Dr. Joseph Mills and his colleague Grant Skrepnek, as well as a 3rd doctor named David Armstrong, who RT’d one of Dr. Mills’ tweets about pigeons becoming diabetic. 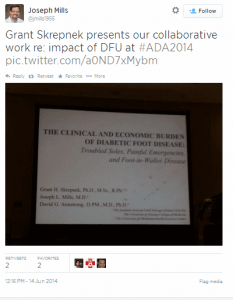 Canada-based Jeff Johnson tweets about watching a presentation that talks about a randomised controlled trial of vitamin D3 – Jeff is a diabetes health outcomes and health services researcher at the School of Public Health in Edmonton, Canada and is not convinced of the evidence of benefits in the case of this vitamin, as seen below. His ‘no evidence of benefit’ tweet is then RT-ed 5 times, including by users in public health and nutrition students. 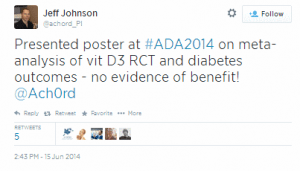 When congress events such as ADA take place, HCPs’ tweets are a great indicator of medical opinions we may not be aware of and can be used to raise conversations with doctors that might otherwise not have happened. For example, the fact that the above mentioned tweet was re-tweeted a number of five times could be used by the presenter or anyone with an interest in the topic of D3 Vitamins to initiate a meaningful discussion on the topic and use the learnings to feed into their next presentation, or at least take an interest in what weaknesses the vitamin shows in the eyes of the medical community.