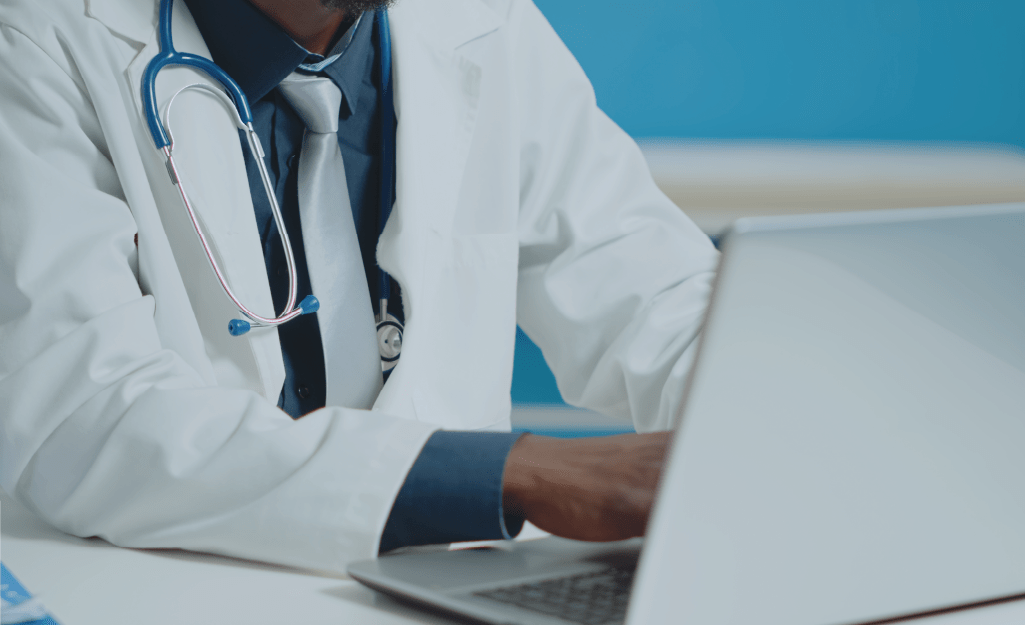 A lifelong condition that is one of the world’s fastest-growing chronic diseases and is estimated to be seen in 700 million adults worldwide by 2045 – diabetes is an area of concern for healthcare professionals (HCPs) worldwide. In 1980, 108 million people across the globe had diabetes, by 2014, that number had risen to 422 million.

It is for reasons like these, that HCPs gather at events such as The European Association for the Study of Diabetes (EASD) annual meeting, to discuss potential solutions. Each year more than 15,000 delegates from over 130 countries attend EASD, with more than 1,200 talks and presentations on the latest results in diabetes research by leading experts in the field. Via CREATION Pinpoint® I have isolated and analysed the online HCP conversation that has arisen from the 2021 EASD annual meeting (September 27 – October 01) and have compiled a list of the five key learnings. 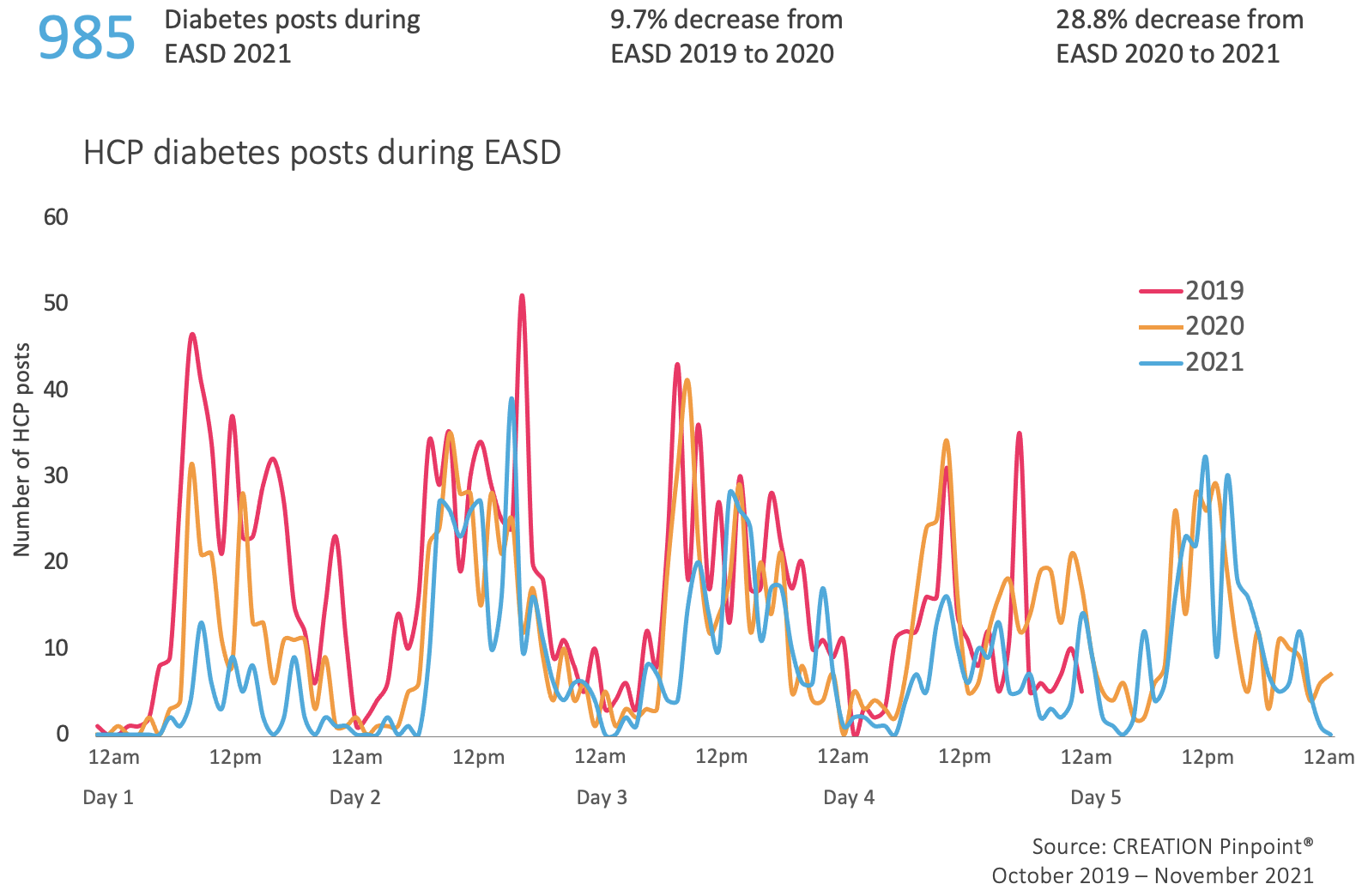 This year’s annual meeting followed the trend of 2020 virtual meetings and was discussed less by HCPs online than previous years. Over the course of the 5 day meeting there were 985 posts from 220 HCPs discussing diabetes in relation to the congress, this is a stark contrast to the 1,588 posts from HCPs during the 2019 meeting – which only lasted 4 days, and was 399 posts less than the, also virtual, 2020 annual meeting. A reason for this could be that HCPs are now tired of virtual meetings and miss the in-person contact from the annual meetings and congresses of old.

This observation was initially reported in a previous CREATION.co study in 2020, #WhatHCPsThink About Virtual Congress, when it was found that HCPs were disappointed at being unable to interact with peers and network at congress. Fortunately for some HCPs, not all of EASD 2021 had to be virtual and a congress coffee break with peers could be enjoyed again.

2. Trial data generated the most discussion amongst HCPs 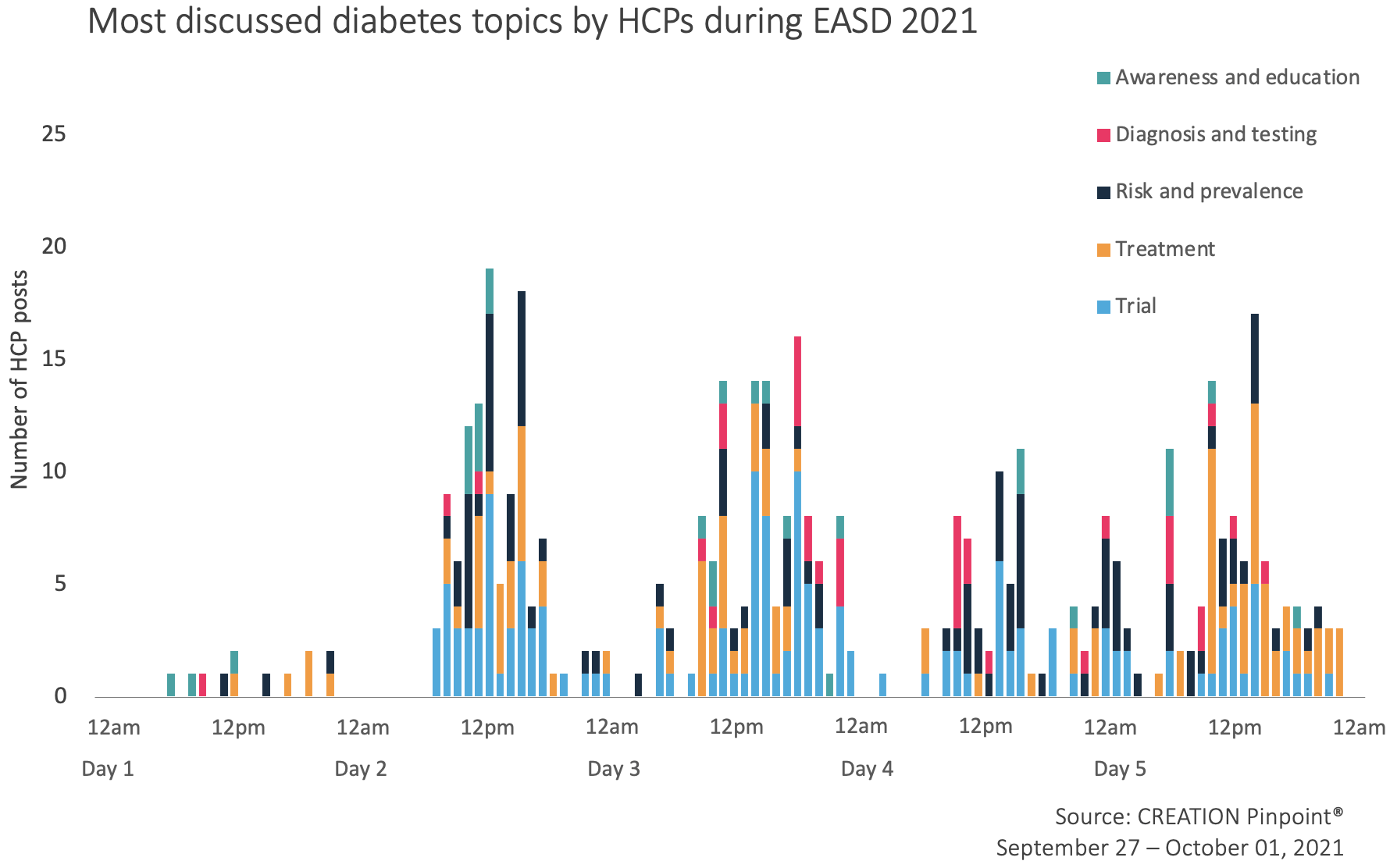 Like many congresses across a broad range of therapy areas, HCPs used their social media platforms to discuss trial data presented at the congress with one another and share information with those not in virtual attendance. From the beginning of EASD’s second day until the closing of the fifth, trial data was a prominent topic in HCPs online discussions surrounding EASD as new findings of trials were brought to HCPs attention for the first time. Interestingly, whilst there were over 150 posts from HCPs discussing trial data at EASD, there were only 3 unique HCP authors with original posts in the topic area.

In this respect EASD followed the pattern of previous congresses in which HCPs share the posts of fellow HCPs, but this digital behaviour was even more evident throughout EASD as over 92% of posts discussing trial data were HCPs resharing information. The drivers behind the higher volume of trial data lead us onto our next key takeaway.

3. HCPs were impressed by Farxiga 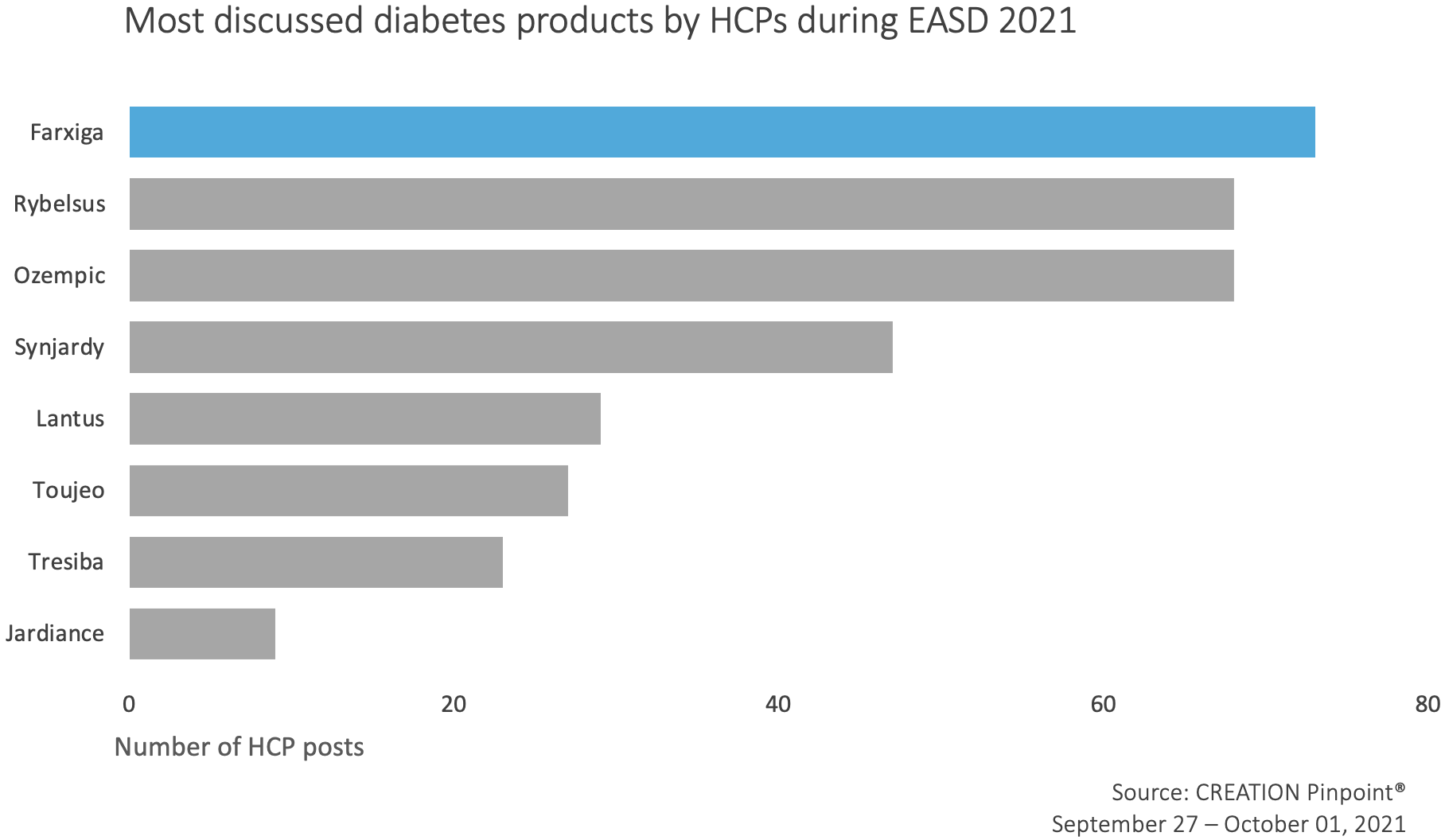 Farxiga (Dapagliflozin©) was the most discussed product at EASD 2021 with 73 posts considering the benefits of the treatment during the week. HCPs celebrated the data that was presented, as Farxiga was found to consistently lower the relative risk of adverse cardio-renal outcomes in diabetic patients. Additionally, Farxiga was found to decrease the chance of new-onset diabetes, for diabetic patients with heart failure and/or chronic kidney disease. HCPs saw this as a big win as they recognised the impact of comorbidities on diabetic patients’ lives.

Despite this praise, other HCPs were less eager to share their excitement for the Farxiga trial data, Kamlesh Khunti, who is a professor of primary care in diabetes and vascular medicine as well as nephrologist Abdelhamid Hamdy, both seemed somewhat underwhelmed with the results of the trial data. Khunti suggested that HCPs should not be surprised with the results and labelled them predictable, whilst Hamdy wanted to know if these trial results had any bearing on diabetic nephropathy prevention.

EASD 2021 was very much a HCP centric meeting, with all 10 of the top posting authors being HCPs. In addition to this the general audience of these posts were fellow HCPs with the content of the posts being aimed at their peers, focusing on education. However, as previously alluded to, the majority of the content at EASD 2021 was shared posts not original posts, this meant that only 6 of the top 10 retweeted accounts were HCPs with the other 4 being a combination of PAGs and medical journals.

With regards to the type of content that was being posted at EASD 2021, images were by far the most common, HCPs regularly included screenshots of the presentation they had been in/presented themselves with the key findings, which were well received by their fellow HCPs with a high volume of retweets. 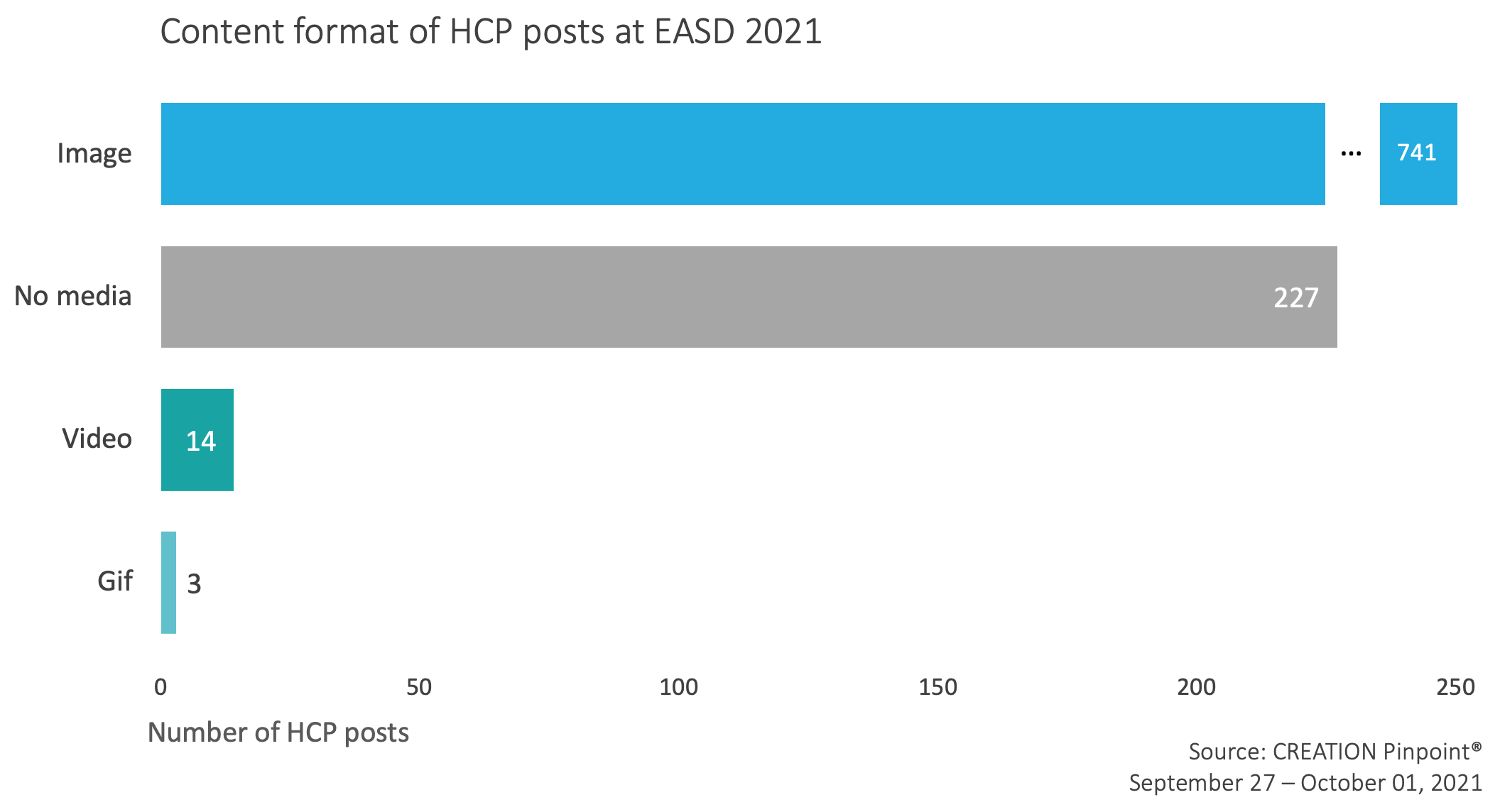 After segmenting the HCP conversation in relation to the different types of the disease, as well as obesity which was commonly mentioned at the meeting, we found that type 2 diabetes (385 posts) received twice as many mentions from HCPs at EASD than type 1 diabetes (169 posts). 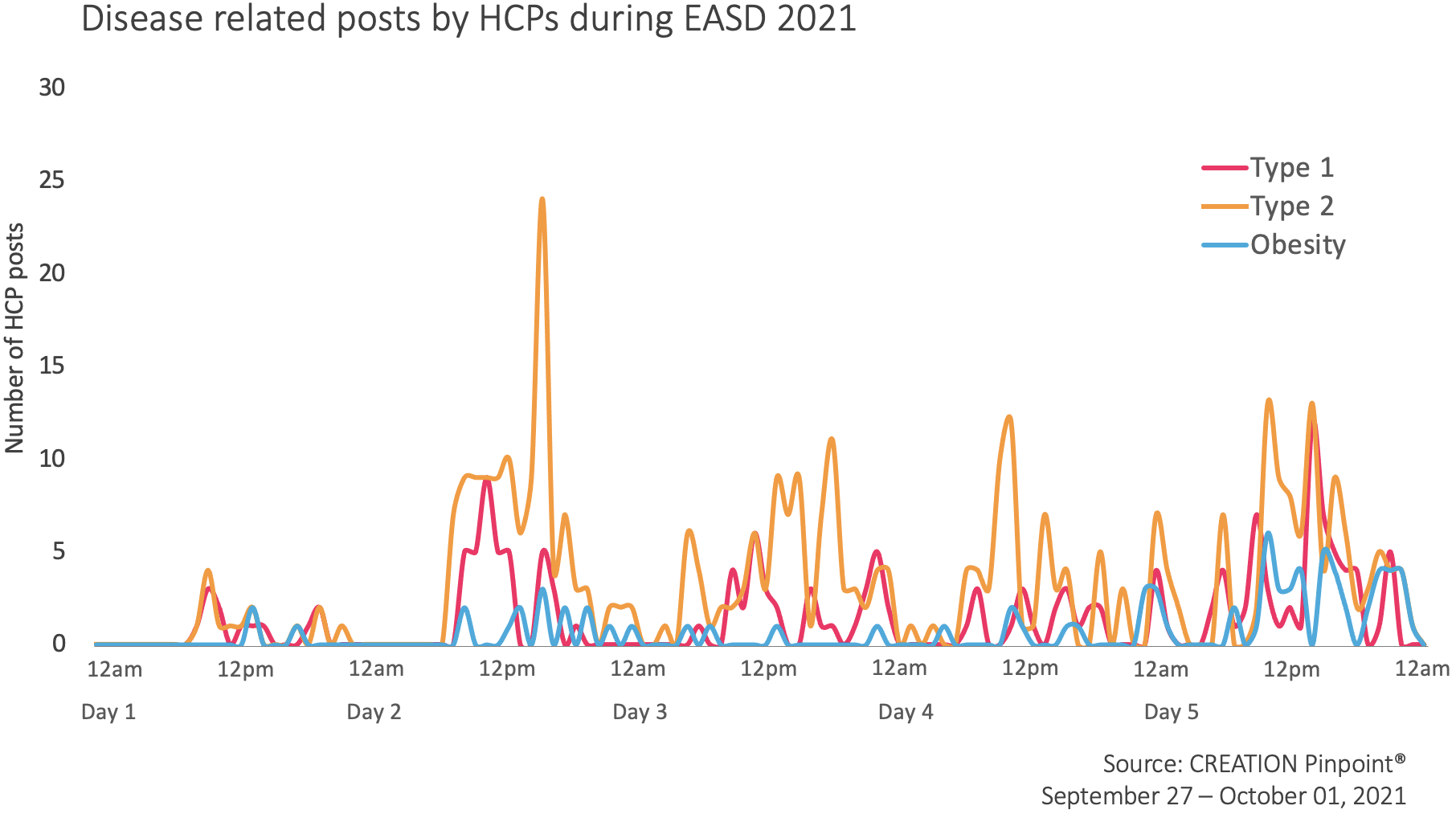 Within the type 2 diabetes discussion many HCPs focused on the current treatment options available to patients as well as the potential future treatments. Amanda Epps who is the founder of the Diabetes Specialist Nurse Forum UK, reiterated findings shared at EASD in her post that products in the sodium/glucose cotransporter-2 inhibitors class will likely be a mainstay of treatment for type 2 diabetes for the next 100 years.

When discussing type 2 diabetes HCPs used hashtags to ensure their posts were seen by the widest possible audience, the most popular of these hashtags was #type2diabetes which was used 178 times, this was closely followed by #t2d which was used in 121 posts.

In addition to these, obesity was mentioned 79 times by HCPs at the meeting, with over 50% of obesity mentions also referencing type 2 diabetes. These posts focused on the impact of weight loss on type 2 diabetes in a holistic approach for patients, as seen in GP’s Rizwan Hussain’s post as well as the challenge of implementing a new weight-centric primary treatment goal in people with type 2 diabetes.

For more information on tracking the conversation of HCPs at congress and to create your perfect congress strategy, please get in touch, we’d love to help. 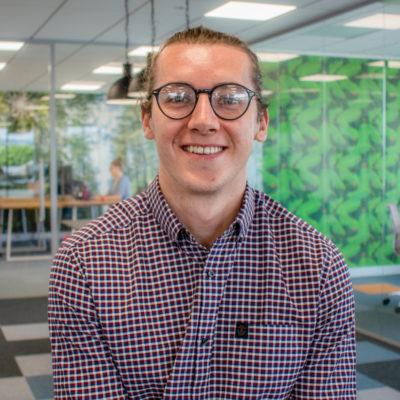 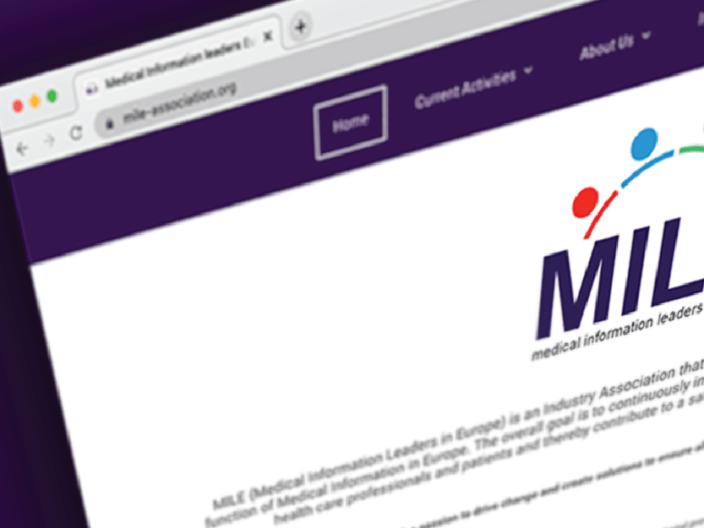 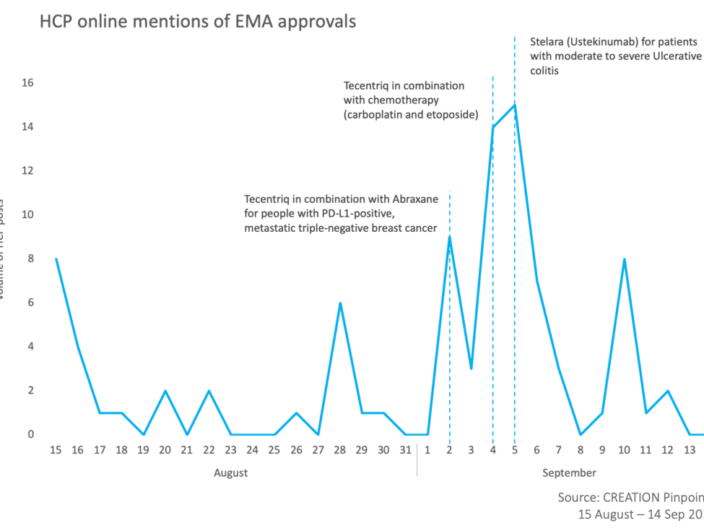