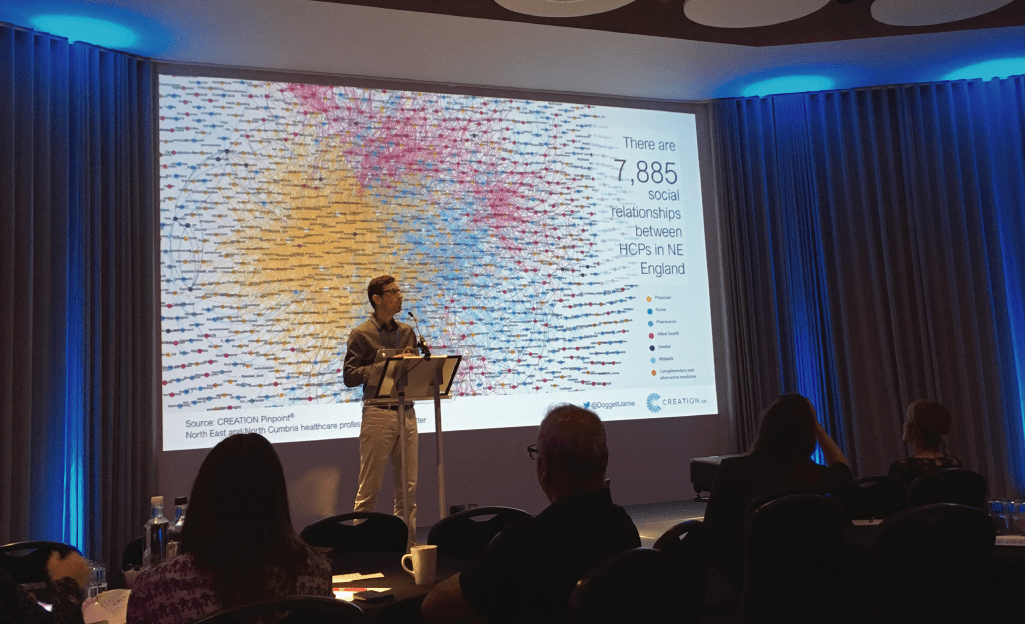 CREATION has recently studied the digital behaviours of healthcare professionals (HCPs) in the North East and North Cumbria (NENC), England in order to present findings at Digital Catalyst 2019 hosted in Newcastle. Using our proprietary technology, CREATION Pinpoint®, 1,942 HCPs were identified in NENC who between them posted more than 2.8 million social media posts since 2007. Seeing the conversation and connections on such a local level demonstrates how social media has permeated all regions in the UK.

Between those nearly 2,000 HCPs, there are 7,885 social relationships; a social relationship is defined as one HCP following another. We noted while small clusters of connected peers in the same role type appear, such as a pocket of physicians and pharmacists, the connections are prominently interdisciplinary. Particularly evident of this are the nurses who have many connections with physicians and allied health professionals, as well as other nurses.

Beyond North East England and North Cumbria, social media allows HCPs to connect globally with other professionals, increasing their influence beyond what may be expected offline. The identified HCPs in this study are followed by nearly 45,000 HCPs worldwide and a total of nearly 570,000 Twitter accounts globally. This global network extends the reach and widens the benefits of online activity, that is the dissemination of information, sharing of opinions and advice as well as more general relationship building and advocacy.

Offline, physicians have the most influence: educating others, speaking at congress and conducting trials and research for the advancement of medicine. When it comes to social media, other HCP roles are able to influence the growing global audiences. In NENC there are more nurses online than physicians. A palliative care nurse, Joy Wharton from Cumbria, has a following of over 3,336 individuals, 39% of whom are HCPs- a higher percentage than is usually seen in HCP networks.

Looking more closely at ratios of HCP to non-HCP following (peer vs public reach), it was found (when this research was conducted) that HCPs in this study have on average one HCP follower for every 10 non-HCP followers. The majority of authors in the study (56%) have less than 20 HCP followers and ten times that overall. This presents an opportunity for many HCPs in NENC, England to build their networks with HCP peers.

Understanding the digital behaviours of HCPs in NENC extends beyond connections to how they individually access social media and share their interests. When analysing the devices used by HCPs to tweet a transition can be seen early on from using computers to mobile devices. In 2010 and 2011 the most used platform to tweet was the web client. In 2012 as the number of tweets being composed was rising rapidly the paradigm began to shift as more HCPs used their iPhones to tweet than computers. From 2013 use of iPhone or Android has been rising steadily while use of web client has declined.

The opportunity here to make sure content being posted is suitable for fast, mobile consumption as individuals are not as likely to read large amounts of text when on mobile.

When using social media to engage with one another, consideration for the interests of others is likely to lead to greater levels of engagement. For example, the Guardian was the most shared source in health conversation by NENC HCPs since 2010. For some who prefer to interact over medical sources and clinical journals, mainstream news or content from other social channels may not be their driver of natural conversation. However engaging with followers’ posts by giving a thought or opinion helps build the strength of the social relationship and network.

Another common behaviour seen in the conversations of HCPs online was the use of hashtags. In the present conversation since 2010, hashtags were used in 27% of tweets. Whilst this may seem a small percentage, HCPs may post one tweet with a hashtag which receives multiple responses from peers without including the hashtag, or it may be part of a thread, a technique used on Twitter to get beyond the restraints of the 280 character limit by threading together multiple tweets. The hashtags used by HCPs give insights to the biggest areas of conversation, implying their interests. Here those issues span from the NHS, junior doctors and junior contracts to Brexit, mental health and #MedEd; a frequently used hashtag to share medical education on Twitter.

Taking a broader look at conversations over time, an interesting pattern appears. Overall NENC HCP conversation started being seen in significant numbers on Twitter in 2012. Monthly conversations about non-health topics averaged of 25,000. However as we have followed these conversations, it can be seen that roughly 25,000 non-health posts per month has remained the average all the way into 2019. The posts relating to health topics (segregated from general conversation using natural language processing) were only small in volume when the overall conversation was emerging in 2012. But there has been a steady rise and the health conversation continues to rise now.

It is encouraging to see the data showing HCPs in the North East of England and North Cumbria are increasingly using public social media to discuss health topics such as treatment options, trial results, the NHS and best practice, across therapy areas.

CREATION Pinpoint® isolates the voice of HCPs online, not only regionally but by conversation in a specific therapy area or between single role types. Recent research has looked at psychiatrists in the online mental health conversation and the pancreatic cancer conversation at a large oncology congress.

There is an opportunity for online networks expand as more HCPs join Twitter, follow each other and contribute to the conversation. This will allow for more growth and connectivity, not only in the North East of England and North Cumbria but across the world. 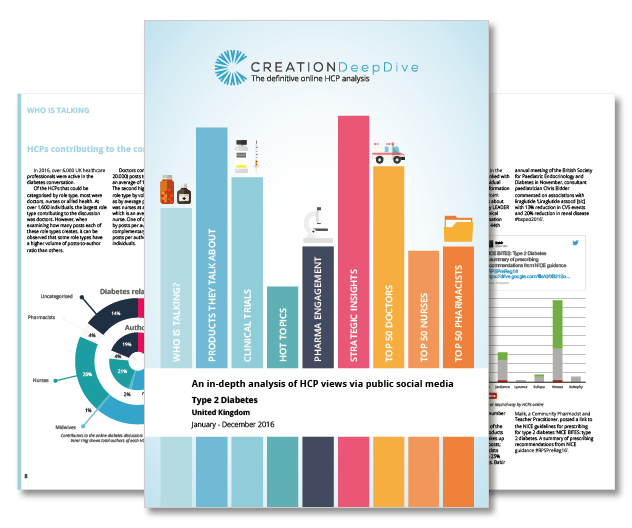 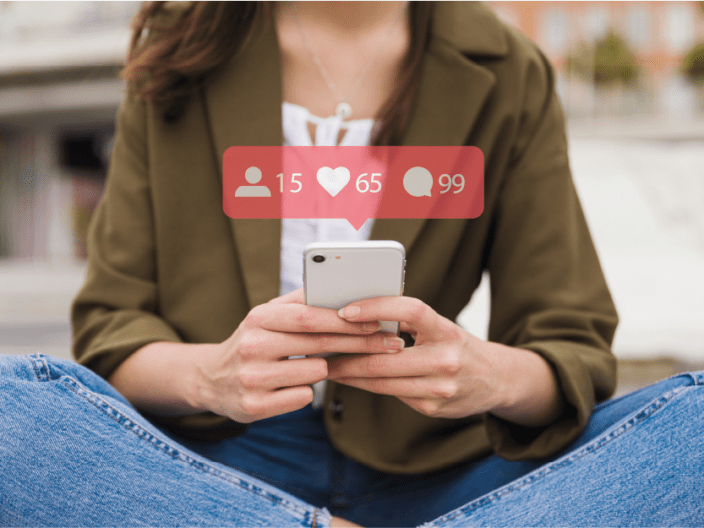