A snapshot of UK HCP conversation: What’s been happening so far this year?

It’s been an eventful start to 2014 in the world of healthcare in the UK, so we used Creation Pinpoint to delve into some of the stories and conversations that have been unfolding recently. What resources and stories have doctors and nurses been sharing with each other on open social networks so far this year? We’ll be tracking stories as they develop and reporting back regularly: this was one story that made headlines at the very end of 2013:

The recent government announcement that migrants who wish to use NHS services would be charged for said services has been widely shared and discussed by healthcare professionals, especially on Twitter. The announcement was met with a wave of disapproval by many UK-based doctors on Twitter, with some HCPs being quite vocal about their disagreement, citing an increase in bureaucracy and deeming the government plans unfair.

A flowchart tweeted by @NHAParty detailed how recent government measures actually increase the level of bureaucracy within the NHS. The original tweet has been re-tweeted 58 times since it was originally shared early last year, and it is still being shared in conversation among HCPs in 2014.

Tweets on this topic ranged from HCPs simply sharing links, to informative articles and conversations on the subject, with most doctors agreeing that the policy plans are neither justified nor feasible. 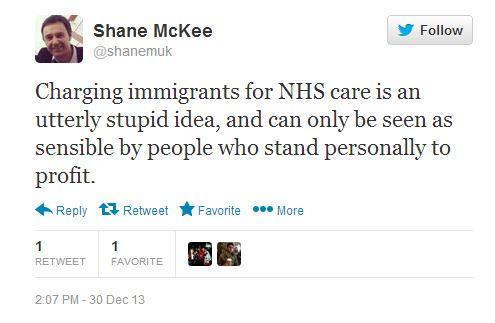 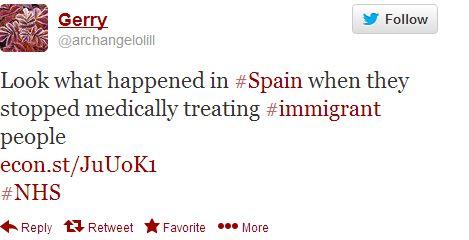 Perhaps the best example of how Twitter is used by HCPs to reach out to one another on important issues and initiate a dynamic conversation to exchange ideas on a variety of topics can be seen below. Hackney-based GP Jonathon Tomlinson posts a tweet addressing the online community as ‘Twitter’, asking for useful ‘takedowns’ of the migrant charge policy. This sparks a conversation and several re-tweets, with other HCPs such as @docsuzy linking to what they think are the most interesting responses on the topic. 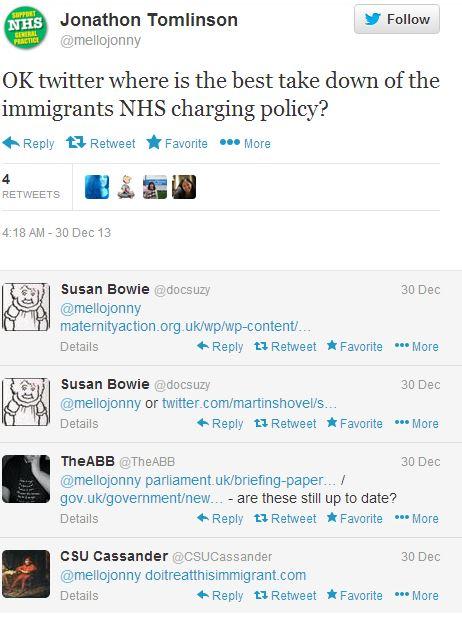