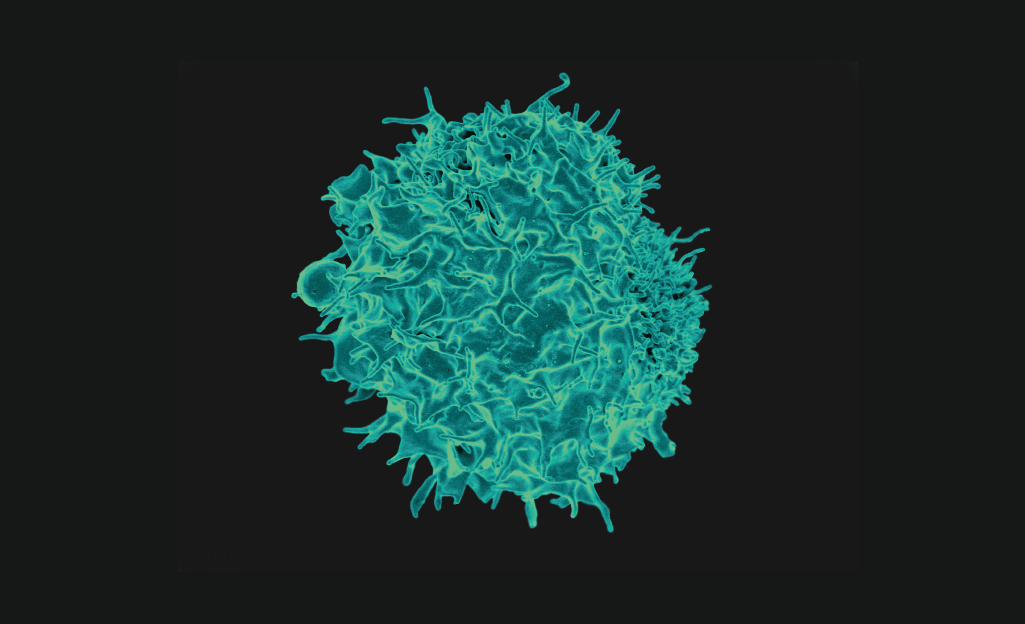 Discover what we learned from the collective intelligence hidden in 20,000 HCP conversations about CAR-T cell therapies

In summary, what you need to know:

Named by the American Society of Clinical Oncology (ASCO) as the 2018 Advance of the Year, chimeric antigen receptor (CAR) T Cell Immunotherapy (or CAR-T Cell Therapy) is an emerging cancer treatment in which the immune system is removed from the patient (or a donor), reprogrammed to fight cancer cells, then put back in the patient. This type of immunotherapy is called “adoptive cell immunotherapy”.

There are two kinds of CAR-T cell therapy: autologous, developed by Novartis and Gilead’s company Kite, in which a sample of the patient’s own blood is removed, the white blood cells isolated, T cells reprogrammed into CAR-T cells and inserted back into the patient; and allogeneic, the type being developed by Pfizer (with Cellectis and Servier) in which CAR-T cells are engineered using T cells from a single donor that are utilized in multiple patients.

In August 2017, Novartis received the first ever FDA approval for a CAR-T cell therapy, Kymriah (tisagenlecleucel), for children and young adults with B-cell acute lymphoblastic leukemia (ALL) that is refractory or has relapsed at least twice.

The following May, Novartis gained a second FDA approval for Kymriah for the treatment of adult patients with relapsed or refractory large B-cell lymphoma after two or more lines of systemic therapy including diffuse large B-cell lymphoma (DLBCL), high grade B-cell lymphoma and DLBCL arising from follicular lymphoma. At the time of writing this article, Kymriah is the only CAR-T cell therapy FDA-approved for two distinct indications – in non-Hodgkin lymphoma (NHL) and B-cell ALL.

Using CREATION Pinpoint, the global insights platform tracking the online conversations of healthcare professionals (HCPs), we set out to learn from the collective intelligence hidden in thousands of conversations taking place among the world’s leading oncology practitioners.

How healthcare professionals are talking about CAR-T cell therapies

While the majority of HCP posts about CAR-T cell therapies discuss the treatment in general terms, more than 10% of the 20,000 posts we studied mentioned a specific product. This is unusual – in most other therapy area conversations we see a number closer to 2% of posts mentioning a named treatment. Of those mentioned, Novartis’ Kymriah and Gilead’s Yescarta were the most-discussed, with Kymriah mentioned twice as often as Yescarta.

With Gilead and Novartis leading the charge against cancer in this breakthrough therapy area, a vast range of other new CAR-T cell therapies are also being developed. According to Alexey Bersenev, Director of Cell Therapy Processing and Advanced Cell Therapy Laboratories at Yale-New Haven Hospital, more than 120 companies worldwide are developing CAR cell therapies.

HCP conversations indicate that they have hopes for CAR-T cell therapies treating a diverse range of cancer types, with lymphomas and multiple myeloma and leukemia being the most widely-discussed cancer types. 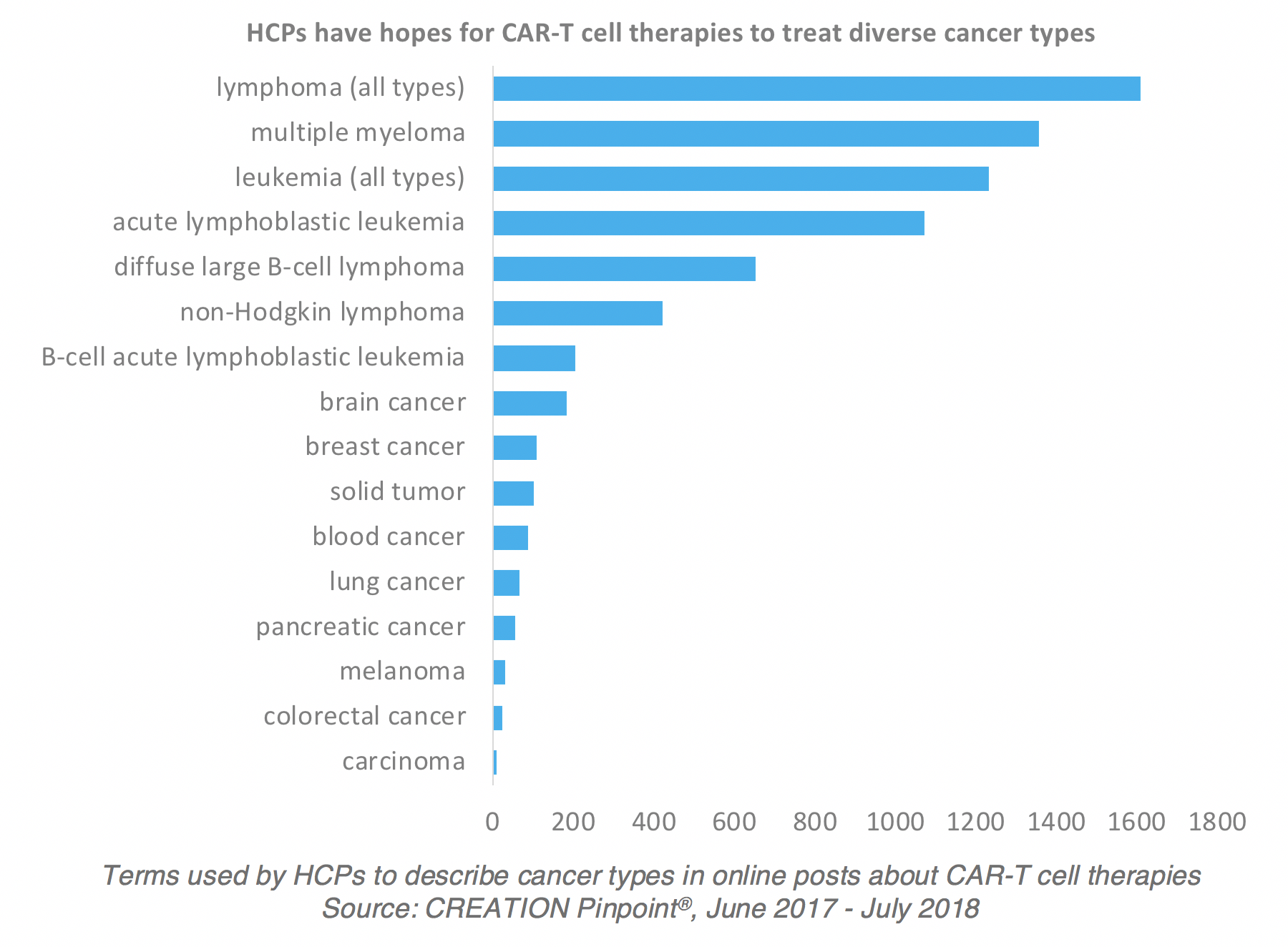 you have lymphoma and you want to program YOUR own T-cells to kill it.
CAR T is amazing!! pic.twitter.com/yOXNSeLTA8

When Stephan Grupp, MD, a bone marrow transplant expert and Director of Translational Research for the Center for Childhood Cancer Research at Children’s Hospital of Philadelphia (CHOP), presented on the opportunities and challenges for CAR-T cell therapy in Europe at the European Society for Blood and Marrow Transplantation meeting, his research sparked significant interest among peers around the world. In the online discussion that followed, Dr Grupp commented on the “amazing job” that bone marrow transplant doctors on the Novartis Kymriah trial did at ensuring safe implementation of the new therapy.

Transplanters need to own #CARTCells and ensure safe implementation and roll out of these new therapies. The BMT docs on the global registration trial for #Kymriah did an amazing job on this. @NovartisCancer

Despite the excitement among HCPs following the launch of the first CAR-T cell therapies, their enthusiasm is countered by concerns about the cost of treatment.

“Might cost a bomb but a gateway to a new era?” tweeted Matthew Choo, Postdoc at the Glyco-analytics lab of the Bioprocessing Technology Institute in Singapore.

FDA approves own patient CAR T cell therapy with Novartis! Might cost a bomb but a gateway to a new era? #leukemia https://t.co/p0eKmTuMPB

More recently, Reshma Ramachandran, a family medicine physician based in Los Angeles, shared a Reuters article and stated that the co-pays for CAR-T therapies are “not cheap”. The Reuters article was corrected after it was first published, to show that co-payment is capped, but Dr. Ramachandran’s Tweet illustrates the concern about the cost of the therapies and the challenges that patients, as well as Medicare, may face in accessing treatment.

.By the way, Medicare put out the co-pays for CAR-T therapies (spoiler alert: not cheap) – minimum patient co-payment for Yescarta is $79,076, for Kymriah the co-payment is $100,168 @VinayPrasadMD #lown2018 @uaem @pcmedsaccess @NPAlive https://t.co/SwtHNIegKF

Graham Collins, lymphoma specialist at Oxford Cancer and Haematology centre, expressed his frustration that despite there being six CAR cell therapeutic companies based in the UK, there is “basically no access” to CAR-T cells in the market.

And yet basically no access to CAR T-cells in UK. Interesting. https://t.co/sCrNDQjK9Q

Concerns about access were also reflected in the conversation sparked by medical oncology and hematology specialist John P. Leonard, MD, a professor at Weill Cornell Medical College in New York, when he tweeted that he expects doctors to spend more time explaining to lymphoma patients why they are not CAR-T candidates than why they are.

Dr Ngaire Elwood leads the Cord Blood Stem Cell Research Program at Murdoch Children’s research Institute in Melbourne, Australia. When her Sydney-based peer Janet Macpherson, Development Manager, Cell & Molecular Therapies at the Royal Prince Alfred Hospital in Sydney asked what is needed to ensure the success of cell therapy products, Dr Elwood tweeted that an allogeneic rather than autologous product is needed, describing it as an “off-the-shelf” product.

Allogeneic CAR-T cells made from cord blood 🙂 Need an off-the-shelf product rather than autologous.

While her Tweet may arguably have displayed a level of bias – Dr Elwood is also Director of the Bone Marrow Donor Institute (BMDI) Cord Blood Bank – the cry for an off-the-shelf solution has also been reflected among other stakeholders who HCPs have engaged with. Advocacy groups such as the Leukemia & Lymphoma Society (LLS) have called for a more widely-available CAR-T cell therapy.

During the Annual Meeting of the American Association for Cancer Research (AACR) in April, LLS tweeted that “Manufacturing ‘off-the-shelf’ CAR-T using donor cells to make CAR T-cell therapy rather than the patient’s own cells could make the revolutionary immunotherapy accessible to more patients”.

The risk of adverse-effects including neurotoxicity – or damage to a patient’s brain – is a significant concern expressed in HCPs’ conversations about CAR-T cell therapy. A blood and marrow transplantation nurse practitioner tweeted during a lecture on Yescarta at the recent Oncology Nursing Society congress, saying that CRS (cytokine release syndrome) and neurotoxicity are frequently occurring side effects.

#Yescarta CAR-T Cell lecture in the learning hall at #ONSCongress reminds us that CRS and neuro toxicity are common and frequently occurring side effects. Know the signs and symptoms. @OncologyNursing

#BMTTandem18 Kean: CNS toxicities with CAR-T may be due to breakdown of blood-brain barrier and infiltration of T cells into CNS parenchyma, not antigen driven (amazing study!) pic.twitter.com/gJGdLfZv9B

Hopes for the future

Despite the risks, HCPs are positive about the benefits including the promise of diminished graft-vs-host activity as reflected in research shared by Memorial Sloan Kettering Cancer Center in New York, and reposted by oncologists among its team.

With hundreds of new CAR-T cell therapies under development, the environment looks set to keep driving lively conversation among oncologists and hematologists who are eager to learn about medical innovations through online discussions with peers.

This brief article provides a glimpse into the incredible insights we’re learning about this emerging area. We will keep watching this space and look forward to tracking the breakthroughs through the eyes – or conversations – of the professionals on the front lines of cancer research and treatment. 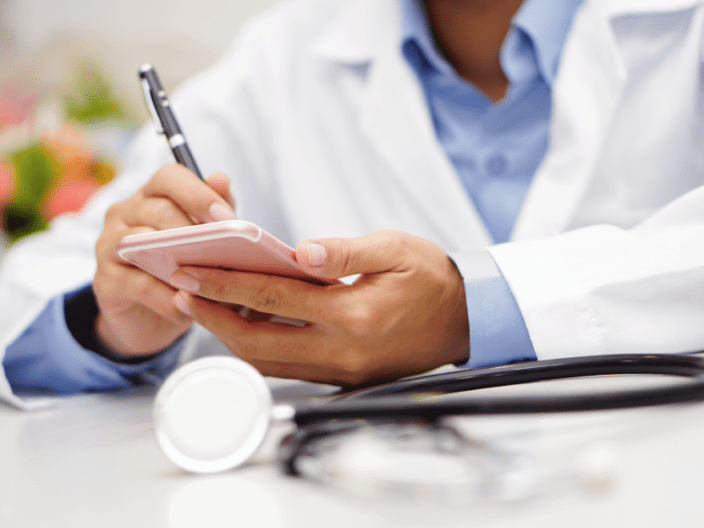