The rapid urbanization of China, as well as its growth during a global period of economic downturn have made it an extremely attractive market for the pharmaceutical industry, as more and more Chinese patients pay attention to their physical condition, medical insurance, and range of treatment options available.

Whether or not the Chinese government and all other involved stakeholders are delivering on their five-point healthcare reform plan remains a matter of debate, as different sources report varying degrees of progress.

To provide a bit of context, it is important to mention that the Chinese government announced its plans for a major national healthcare reform  as early as 2009, outlining the need to develop an affordable and accessible healthcare infrastructure, whose coverage will be expanded to include the entire population of the country. Other objectives within the plan include strengthening the existing infrastructure in order to allow it to better serve rural citizens (for a long time, citizens ‘without means’ were denied care as China’s main focus remained its economic growth), upgrading the payment/reimbursement system, better regulation of drug manufacturing and procurement, as well as a revamp of its public hospital system, which implies a more patient-focused approach and modernized standards of practice.

A recent policy briefing on the healthcare reform chaired by the WHO, UNICEF and UNFPA, allowed the organizations to discuss the progress China has made since 2009, together with Chen Zhu, the Minister of Health in the country.  Dr. Michael O’Leary, WHO representative in China, has stated that the efforts targeted at reaching more rural citizens as well as Western regions of China, which lags behind other parts of the country in terms of economy and development, were impressive.

Chronic diseases have become prevalent very quickly, with China having the most diabetes sufferers in the world in 2010.

However, whilst healthcare facilities in China are improving and the essential drug system has been put in place at numerous rural clinics, expanding coverage to include over 1.3 billion people is not an easy task, and several sources have reported that despite the field of diagnostics becoming increasingly cost-effective, specialist medical procedures are still out of reach financially, which leads to a high mortality rate after patients are diagnosed.

Another pressing issue is the lack of regulation of TCM (traditional Chinese medicine), which has sparked serious scandals in the past due to cases of poisoning caused by contamination with materials such as sulphur.

Lastly, as China’s population becomes increasingly affluent and a large part of the population experiences a change in lifestyle due to rapid economic growth, chronic diseases such as diabetes and obesity have become prevalent very quickly, with China having the most diabetes sufferers in the world in 2010. As a result, the country remains inadequately equipped to deal with the prevalence of these diseases, especially when coupled with an aging demographic profile.

Is Usage of Social Media in China ‘more advanced’ than in ‘Western’ Countries?

It is already well known that most Western social networks have their Chinese counterparts, due to the original versions being banned in China.

China’s internet audience is the largest in the world, with a number of 513 million people (and growing) online in 2011. Adoption of social media in China has been rapid, partly due to broadband becoming increasingly affordable, but also due to migration from rural to urban areas which has resulted in separation of families. Another factor is the population’s mistrust of national media, which is government-controlled. Whilst overall internet penetration in China may be relatively low, the members of the public who do use emerging channels differentiate themselves from their ‘Western counterparts’ by being content creators first and consumers second.

With such an engaged network of social media and internet users, it is no surprise that Chinese healthcare professionals are highly tech-savvy.  Dxy.cn, the largest Chinese physicians online community has gathered around 3 million members who share professional opinions, debate difficult medical cases and exchange ideas online. 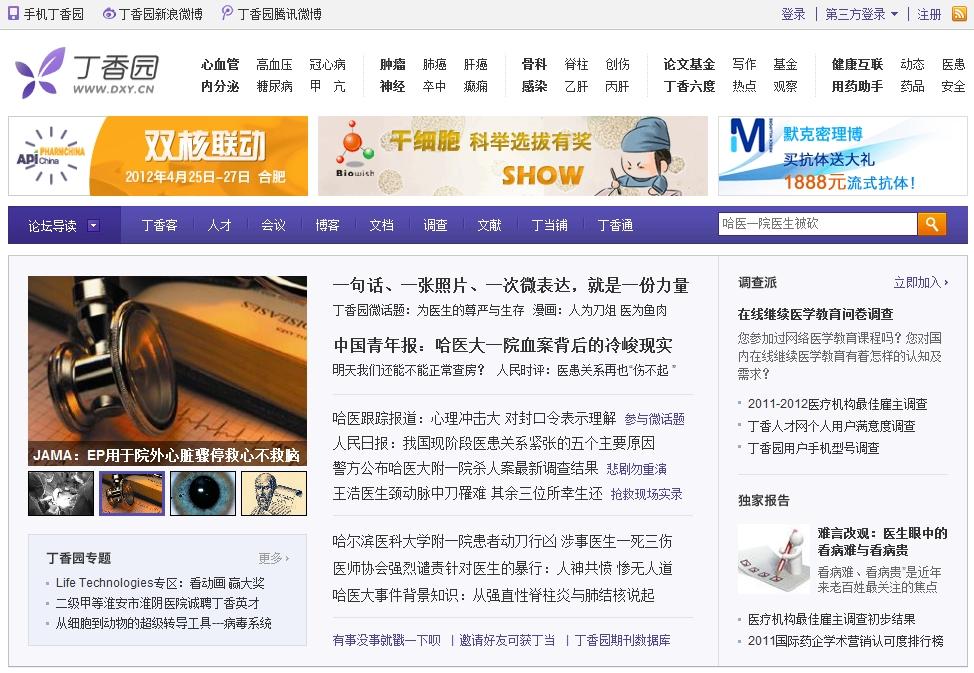 According to a Xinhuanet report, microblogging (mainly on Sina Weibo, the Chinese equivalent of Twitter) has been taken up by numerous Chinese physicians and is now one of the most popular platforms for two-way dialogue between various stakeholders in the healthcare industry, with doctors treating cancer and other chronic diseases being the most popular members of the site.

Gu Zhongyi, a Beijing dietitian states that the doctor-patient relationship has benefitted the most from the profileration of microblogging platforms, which aid mutual understanding and are often used to schedule visits. Some physicians, such as Dr. Yu Ying, have gathered hundreds of thousands of followers on Weibo, who routinely ask for professional advice.

However, concerns regarding patients’ privacy as well as other regulatory risks remain: whilst strict rules are put in place to ban the advertising of certain drugs through traditional media channels, no such guidelines have been issued for microblogs.

Whilst the merits of the physicians’ microblogging efforts must be recognised, especially at a time when quality medical resources are limited, actions such as posting patients’ photos (even if they are not recognizable) may constitute a major breach of privacy. Although there is a significant gap between urban and rural access to healthcare, and microblogging has proven very successful in terms of disseminating disease prevention knowledge, concern exists among some Chinese academics and healthcare professionals that there is not enough supervision over its content.

Peking Union Hospital, a leading healthcare facility in China, however, has already started assigning staff to follow, update and maintain the microblogs of its most popular doctors.

Microblogging is now one of the most popular platforms for two-way dialogue between Chinese physicians.

It seems that little by little, the Chinese digital landscape will begin to resemble its Western counterpart in terms of fears over compliance risks and lack of official regulation, although we cannot yet talk about digital being ‘the norm’ for life sciences organizations in China.

Due to the majority of Chinese healthcare professionals already experiencing interactive, easily searchable and entertaining features on digital platforms, their future expectations may be higher when it comes to digital engagement campaigns oractivities. This may be one of the reasons behind the pharmaceutical industry’s reluctance to experiment with creative content that engages the online physician community.

Potential of digital in China is still untapped by pharma

As the Chinese government focuses its efforts on expanding the national essential drug list to include almost 800 drugs, further price cuts are being made on medicines that can be purchased from hospitals (which typically provide a higher profit margins).  Antibiotics manufacturers have been hit particularly hard as the healthcare reforms aim to reduce liberal prescription of the drugs, which have been used to treat a very broad range of conditions (an issue common throughout Asia).

Drug sales have always been a major source of profit for hospitals in the past, but the Chinese government is now aiming to drive down prices through a bulk-buying policy implemented to keep prices very low.

However, it seems that the possibility of using digital channels to provide educational materials or influence opinion leaders has not been taken into account by major pharma  manufacturers, leaving a great amount of untapped potential in China’s digital landscape.

According to a study undertaken by Kantar Health, there is great potential to engage Chinese physicians online, especially given their level of digital knowledge and the time they spend on various hubs writing articles, or contributing to blogs. According to research data from Accenture, obtaining accurate product information is of utmost importance to Chinese physicians due to fears of acting on dated or imprecise information.

Having said that, it is important to remember the fragmented nature of China’s medical industry. Although the government is hoping for more mergers to consolidate it, there are still significant differences between urban and rural hospitals, as well as numerous relatively small pharmaceutical and/or healthcare firms in the country. A common term used to denote a well-developed, metropolis-like Chinese city is ‘tier one city’ (with examples being Beijing, Shanghai and Tienjin). Subsequently, a ‘tier two city’ will also need to be well-developed in terms of exports, foreign investment, and policies, but it only needs to have a population of about 3 million (with a minimum GDP per capita of $2000) to qualify as such.

There is no formal definition of what constitutes each tier, however, but it is generally agreed upon that a high level of growth will be seen from tier three cities. It is not difficult to see why physicians in varying cities will have different needs in terms of information delivery (a physician from an urban tier one city with a high load of patients is more likely to be interested in an alternative to medical reps).

It is easy to see why global companies look to China as the middle classes grow increasingly affluent, but a ‘one size fits all’ approach should be the last option on their minds, considering the fragmentation and competitive nature of the local healthcare industry. The tremendous economic differences between different regions of the country pose significant challenges to the digitization of healthcare, but the fact that a large number of local healthcare professionals are including digital platforms in their mix of professional resources shows that they are strong users of social networks and are very likely to benefit from credible medical publishers.

Georgiana Murariu is a Research Executive with Creation Healthcare, based in London. Creation Healthcare’s teams in emerging markets including China provide local insights that inform well-targeted marketing and communications plans for healthcare and pharmaceutical organizations.