In the context of the new healthcare engagement environment and having considered the role of healthcare professionals in the digital era, it is clear that the influence of stakeholders including healthcare professionals, patients, and policymakers upon each other has been disrupted by digital channels. We must therefore consider the concept of ‘Digital Opinion Leaders’ with an open mind. This is true not only now, but at all times in the future as we continue to learn through engagement with, and observation of, digital stakeholders.

I met Kelly Young in person at e-Patient Connections conference in Philadelphia last year. Kelly is a patient who has lived with Rheumatoid Arthritis for the past six years, and for the last three of those she has been writing her blog, Rheumatoid Arthritis Warrior and engaging with other patients and professionals through social media channels including Twitter and YouTube.

We have already considered Kelly Young’s digital influence when we looked at the New Healthcare Engagement Environment in the earlier section. Kelly says that through her writing, speaking and use of social media she is “…building a more refined and accurate awareness of Rheumatoid Autoimmune Disease (RAD) aka Rheumatoid Arthritis (RA) geared toward the public and medical community; creating ways to empower RA patients to advocate for improved diagnosis and treatment; and bringing recognition and visibility to the RA patient journey.”

Kelly’s role in the area of Rheumatoid Arthritis is mirrored by countless other patient bloggers living with chronic disease. Kerri Sparling, who blogs at Six Until Me, is one of numerous active bloggers and social media advocates living with diabetes, while Lisa Emrich blogs at Brass and Ivory about her life with Multiple Sclerosis, for example. 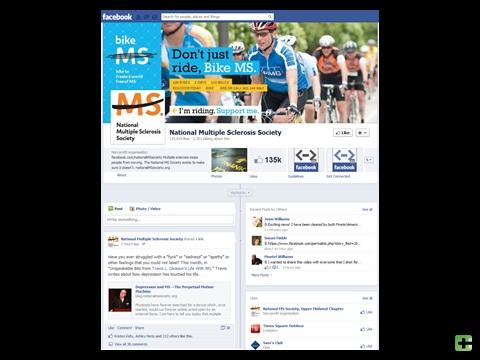 National Multiple Sclerosis Society’s Facebook page has over 136,000 ‘likes’ and is an engaging environment.

With over 136,000 ‘likes, the National Multiple Sclerosis Society’s Facebook page is a highly engaging environment connecting stakeholders who are affected by MS. It is more than a channel where the Society broadcasts information – every post on the page is followed by lively responses and most are extensively shared by others, extending the reach of the page significantly.

Facebook is just one of the social media channels employed by the National Multiple Sclerosis Society to engage stakeholders. The Society operates its own dedicated patient community, MS Connection, designed to connect patients together through blogs, discussions and local groups. It is also active on Twitter, and videos on the Society’s Youtube Channel have been viewed almost 1.5 million times.

The role of patient advocacy groups as online influencers has been recognised by pharmaceutical companies through the establishing of partnerships to achieve mutual goals through digital engagement. We will explore some examples of this approach in the next section, ‘Activating Digital Opinion Leaders’.

I spoke with Christine O’Connell in March 2011, shortly after pharmaceutical company KV Pharmaceutical’s share price had dropped by over 20% in just one day, and three weeks after Ms O’Connell had launched a Facebook page in protest at the company’s pricing of its newly FDA-approved synthetic progesterone product.

“I started this page quite simply because I was outraged”, she told me. “I knew if other people knew… they’d be outraged too. Facebook gave me the platform to reach a lot of people in a short time”, she said, speaking of the page she created in protest at KV Pharmaceutical’s pricing policy, which she entitled “Shame on you, KV Pharmaceutical and CEO Greg Divis”.

The Facebook page acted as a hub to connect mothers of premature babies who shared Ms O’Connell’s anger, and also attracted healthcare professionals, news media and medical organisations. “We shared information and ideas on everything from boycotts to contacting our Congressional representatives”, she said. 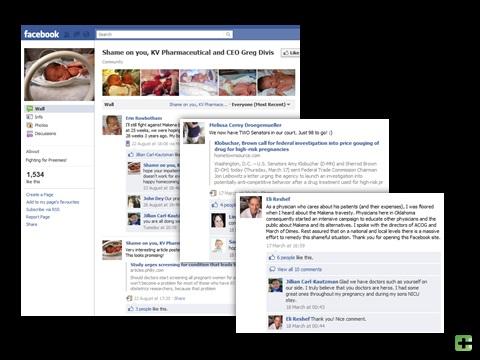 Whilst the Facebook page was not the only activity that contributed to the FDA writing a letter of clarification three weeks after its launch, it clearly played a role in mobilising extensive activity both online and offline that ultimately had a major impact on one pharmaceutical company.

Anne Marie Cunningham is arguably one of the UK’s most influential doctors on Twitter. With over 7,000 followers, the GP and Clinical Lecturer is a prolific Twitter user, having posted almost 70,000 tweets since she started tweeting in 2008. In the same year she launched her blog, entitled Wishful thinking in medical education, in which she promotes the idea of collaborative learning through social media.

“Medical education on Twitter is fantastic. There are no professional or geographic boundaries to discussions”, writes Dr Cunningham in her blog. “And no boundaries to patients participating either!”

The majority of Dr Cunningham’s tweets are direct engagement with other doctors, who are located all around the world. Her social media engagement with others illustrates the global nature of the Internet, where ideas are shared openly between all stakeholders regardless of geographic location. In a recent conversation about clinical practice, she directed a tweet at a Paediatrician on London, UK, then a Postgrad Medical Student in the UK’s West Midlands, and then a Gastroenterologist in the US.

Dr Cunningham is representative of a growing number of healthcare professionals who actively use social media platforms to ask and answer questions and help shape each other’s medical education through social media.

The examples discussed here – the patients, advocacy groups and healthcare professionals actively engaged via social media – provide a practical glimpse into the role of Digital Opinion Leaders in shaping the behaviour of other health stakeholders, both online and offline. The next section reveals a 3-step process to Activate Digital Opinion Leaders.

This article is included in my eBook, Activating Digital Opinion Leaders, available to download free of charge.