The summer of 2015 has been an unusually eventful one in the therapeutic area of diabetes, with Diabetes UK warning that a large proportion of the fiscal difficulties currently faced by the NHS can be attributed to a sharp rise in diabetes cases in the country. Rising from 2.1 million in 2005 to 3.3 million in 2015, the number of cases has increased by a whopping 60% while diabetes treatments such as insulin and metformin account for 10% of the total NHS drug bill.

In the meantime, recent reports have estimated that around one in three adults in the UK is suffering from pre-diabetes, a much-debated term that has no universally established or agreed-on starting point. Diabetes prevention programmes centered around referring pre-diabetic patients to further treatment have been criticised for over-medicalising the population whilst ignoring more complex, underlying factors that may be contributing to the prevalence of unhealthy lifestyles.

Healthy lifestyle as a factor in diabetes prevention and management

The topic of diabetes can lead to divisiveness and debate around not only medical, but also holistic, lifestyle-based approaches to preventing and managing it. Just over a year ago, UK healthcare professionals expressed scepticism with regards to bariatric surgery being proposed as a treatment for diabetes sufferers who have a body mass index of above 30, arguing that the guidance will lead to the commodification of surgery as well as detracting from efforts to ensure that diabetics make healthier lifestyle choices.

During this particular study period, the second most shared link (topped only by a BBC headline) was a post by Frimley, UK-based cardiologist Aseem Malhotra, who raised the question of public health messaging in the diabetes area, pointing out contradictory messages in official guidelines from different organisations. 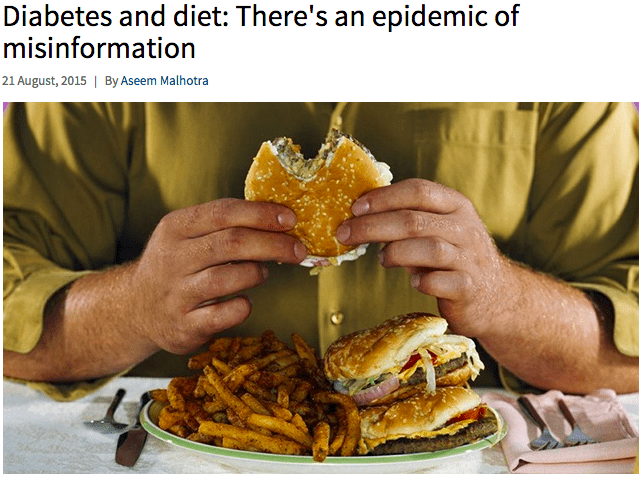 The low-carb vs. low-fat diet debate is not new, and messaging has indeed changed over the years, with mounting evidence that fat storage is driven by insulin and triggered by excessive consumption of starchy foods. Dr. Malhotra highlights the benefits of being able to carry out a ‘demolition job’ of current dietary guidelines, which promote a diet low in fat.

“By simply serving smaller portions of the same foods that caused the problem in the first place for Type 2, the effect is the same; you will not stop or reverse metabolic syndrome unless you change what you are eating.”– Cynthia Albert, critical care nurse based in Texas, US.

During the three-month study period, around 5,550 diabetes-related mentions were made by UK healthcare professionals in public social media. The charts below show how segmenting the data can give us a glimpse into what they are really saying in forum posts, blog entries, and Tweets when broken down into different categories. For example, type 2 diabetes (also referred to as ‘t2’) was mentioned in around 11% of the total posts, while type 1 diabetes mentions amounted to about 4% of the total conversation. However, given that type 1 diabetes cases only make up around a tenth of total diabetes cases, the diagram shows that due to its relative complexity, type 1 diabetes is tackled more often by healthcare professionals in online conversations from a proportional point of view. 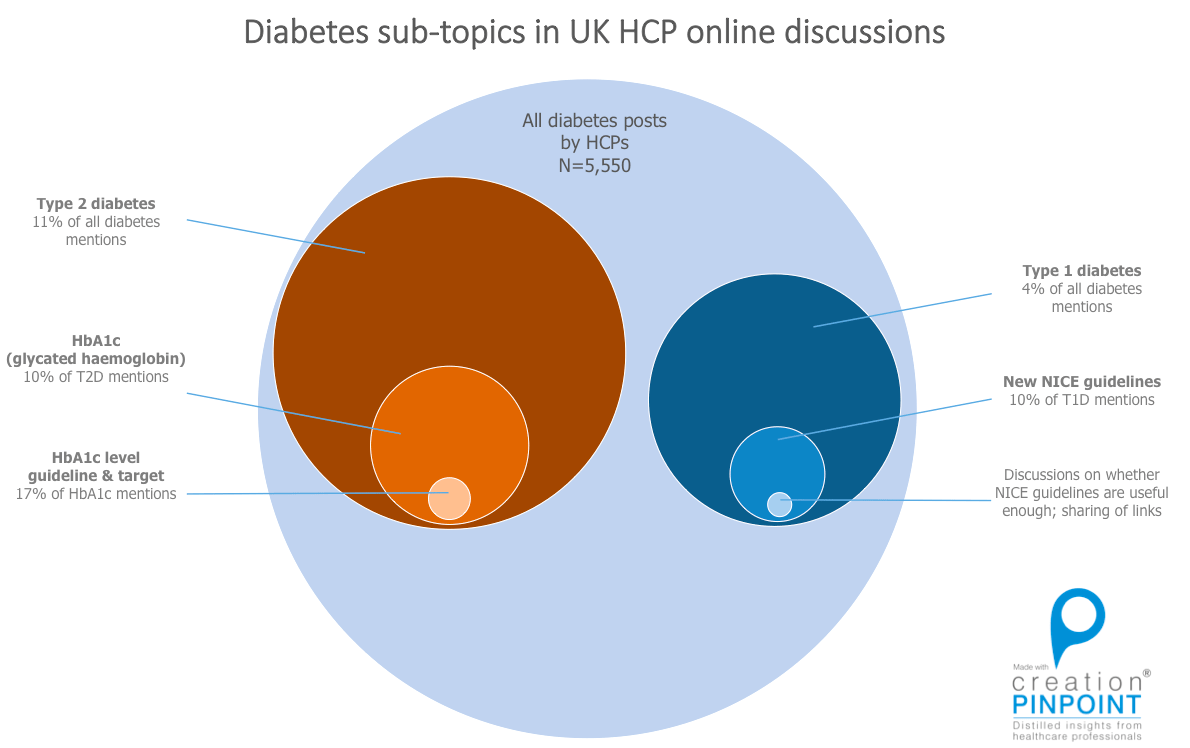 Doctors took a two-pronged approach to discussing diabetes online, with a significant chunk of conversations focusing on the prevention of diabetes via lifestyle changes, while also tackling diabetes management after the disease has already set in. 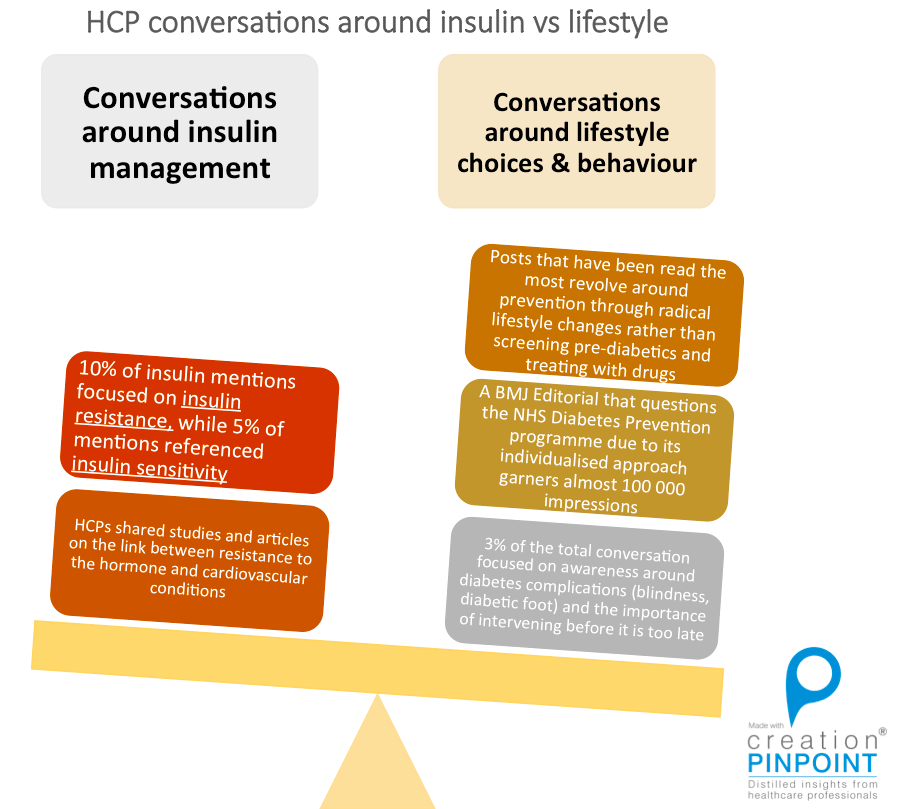 As mentioned above, because of the nature of the condition, it is perhaps a more divisive chronic illness due to its lifestyle component. Dr. Amir Hannan, a GP based in Cheshire, highlights the importance of digital dialogue between carers, healthcare professionals and patients in order to ensure that no group is alienated.

Healthcare professionals participated in a variety of debates around the NHS during the study period, with some prominent discussions around patient education and re-evaluating the national diabetes prevention programme in light of the new statistics that point to a lack of effectiveness within the system. Source: Creation Pinpoint During Diabetes Week (14-20 June 2015), healthcare professionals called for more thorough diabetes screening programmes, disseminating messages around evidence-based diet information for diabetics and pre-diabetics, and discussing what pharmacists could do to get even more involved in tackling management of the disease. Hampshire-based James Andrews engaged with healthcare professional peers to get more clarification on specific procedures and processes in diabetes management. His Tweet generated a discussion around resource and knowledge sharing:

If you’re a community provider doing much #diabetes work could you try answer these Qs for me?! #pharmacy #weph pic.twitter.com/5trbdGefpi — James Andrews (@aptaim) June 12, 2015

Undoubtedly, diabetes will remain one of the central topics of focus within the arena of healthcare in our time. Not only does the disease have profound repercussions in the form of cost of care and mortality rates, but the many psycho-social correlations and factors around the disease mean that much remains to be learned from cross-sectional studies that take into account multiple dimensions of the treatment and chronic disease management process.