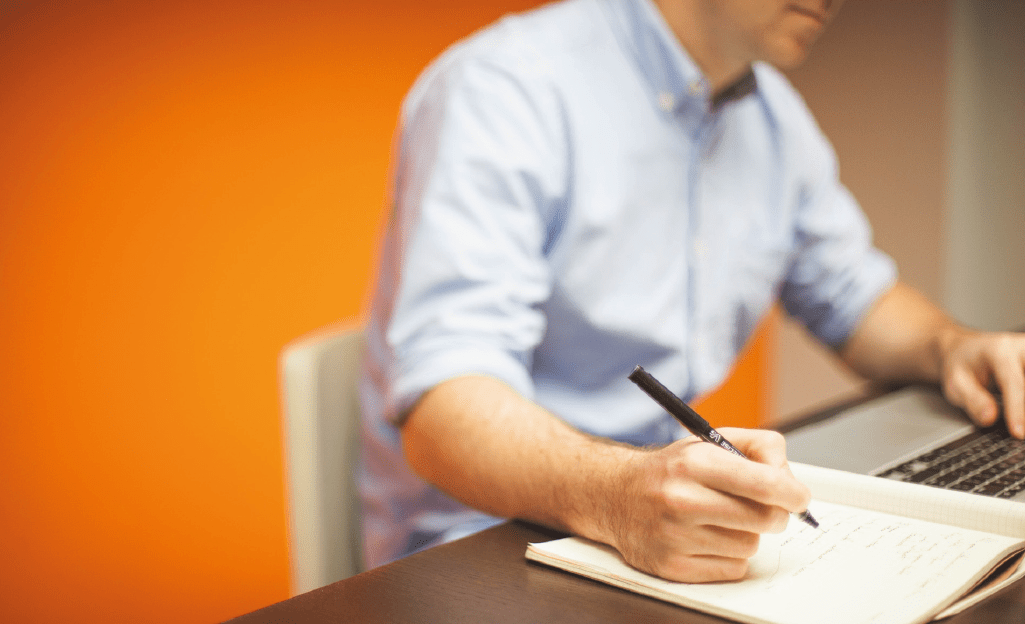 CREATION has been isolating the conversations of healthcare professionals (HCPs) on public social media since 2012. Listening to these unprompted conversations can give us insights into HCPs’ needs and views on the latest products, patient care or current medical news to name a few. Five years on, CREATION can now also listen to anonymised HCP conversations in SERMO, a private HCP network.

As we prepared to launch this new opportunity, we conducted a study to compare and contrast doctors’ conversations on a public and a private network. Namely Twitter*, which has 313m monthly users, and SERMO*, the world’s largest online medical community dedicated to doctors. We identified posts from 2013 that related to bariatric surgery. It was first interesting to see who was in the conversation on the two networks. SERMO is a closed doctors’ network so 100% of posts were from doctors of various specialties. However, on public social media we can see which additional role types were included in the online HCP conversation. 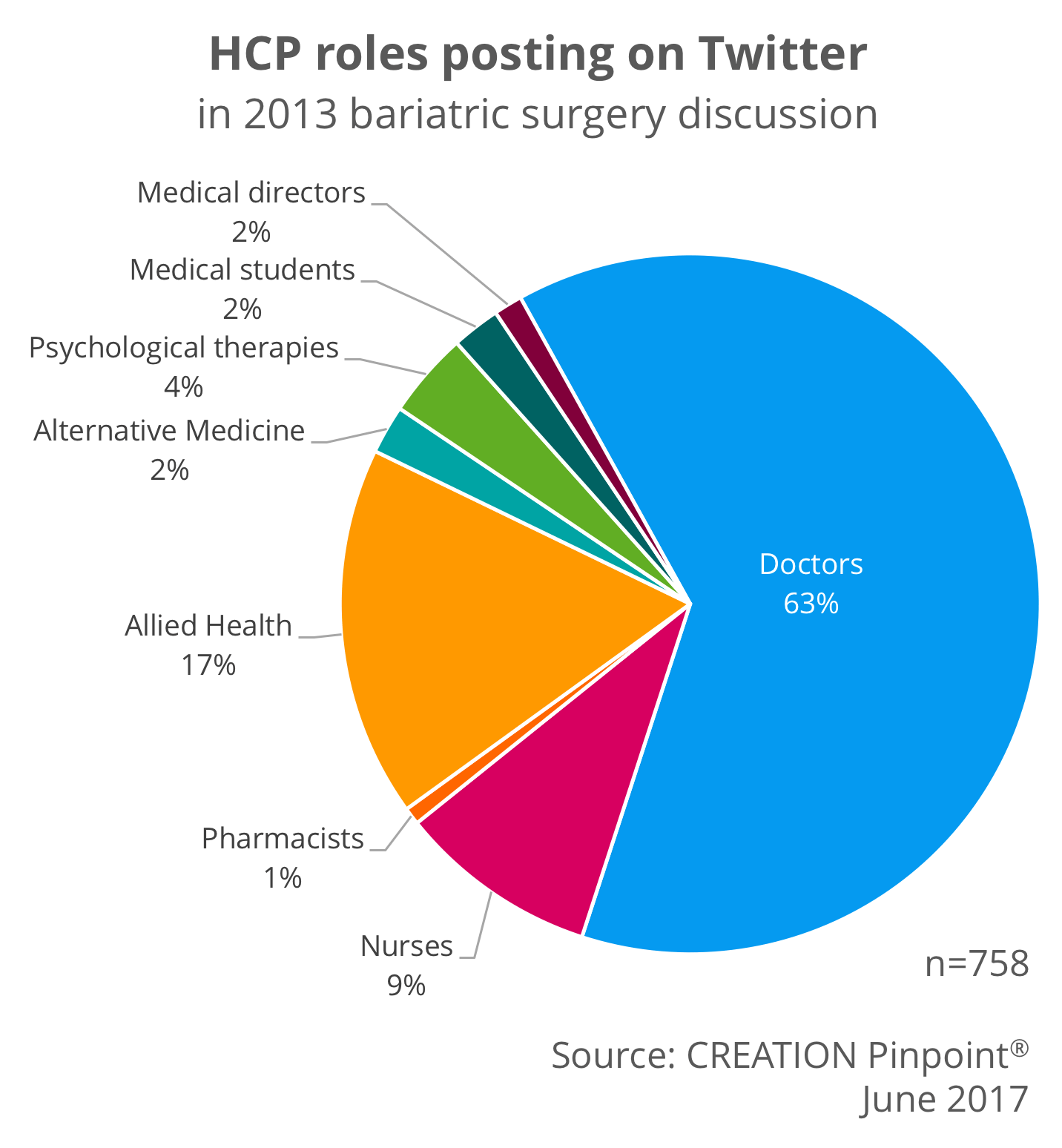 On Twitter, doctors made up almost two thirds of the conversation. Nurses and allied health professionals were the majority of the remaining HCPs in the conversation. Comparing the number of authors to the posts contributed by an author type we can observe that the doctor’s voice was even larger in the public conversation. 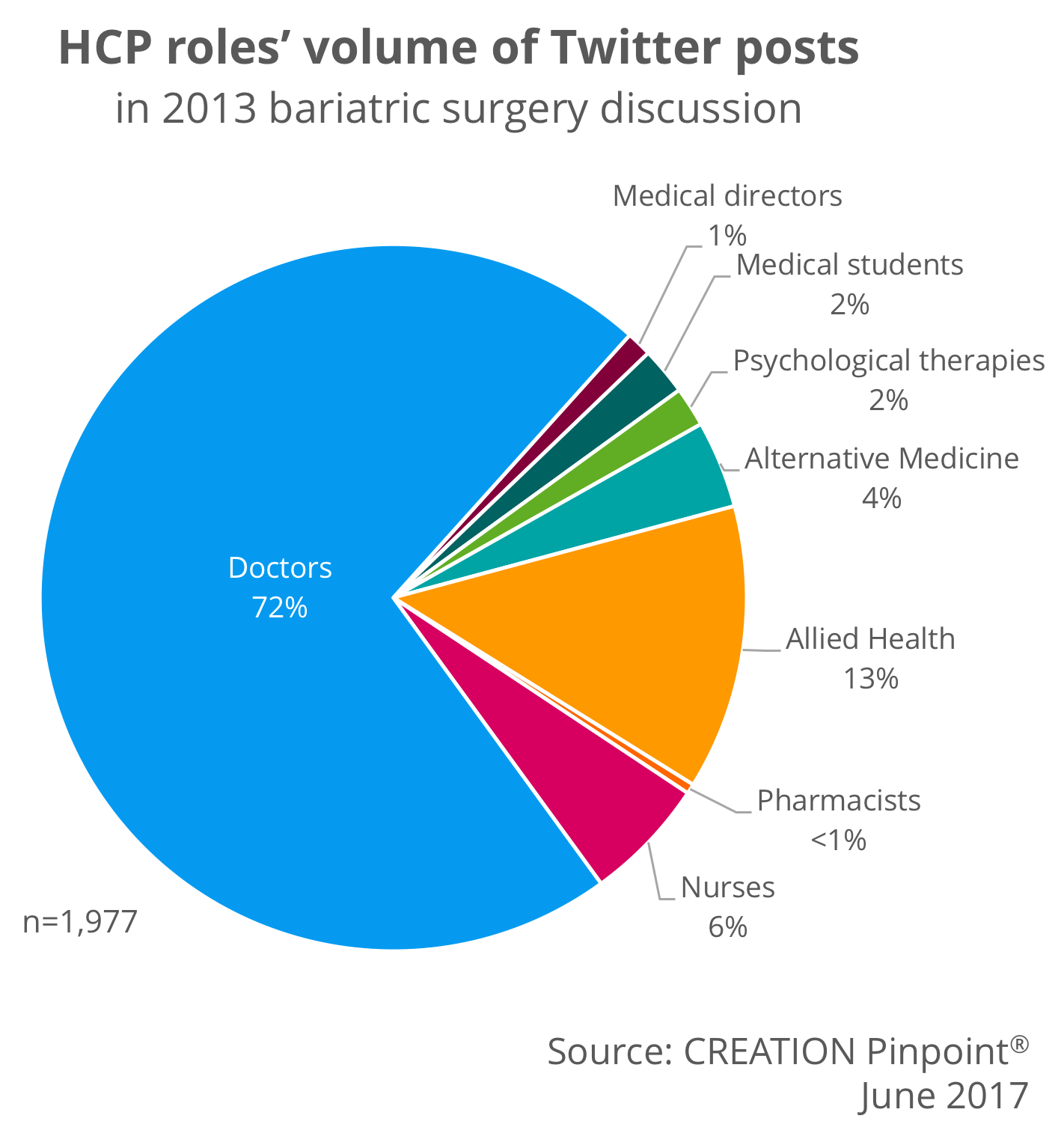 To accurately compare the two sets of data we looked at just the doctors posting on Twitter, and the SERMO dataset. There was a higher number of doctors in the discussion on SERMO; 682, compared to the 574 doctors on Twitter over the same period. We looked at the specialties of these doctors; in SERMO there was a larger number of surgeons in the discussion than on Twitter, making up 47% of all doctors’ specialities. Surgeons also formed the largest group of participants on Twitter but made up a smaller percentage due to the large volume of family medicine doctors in the public discussion. 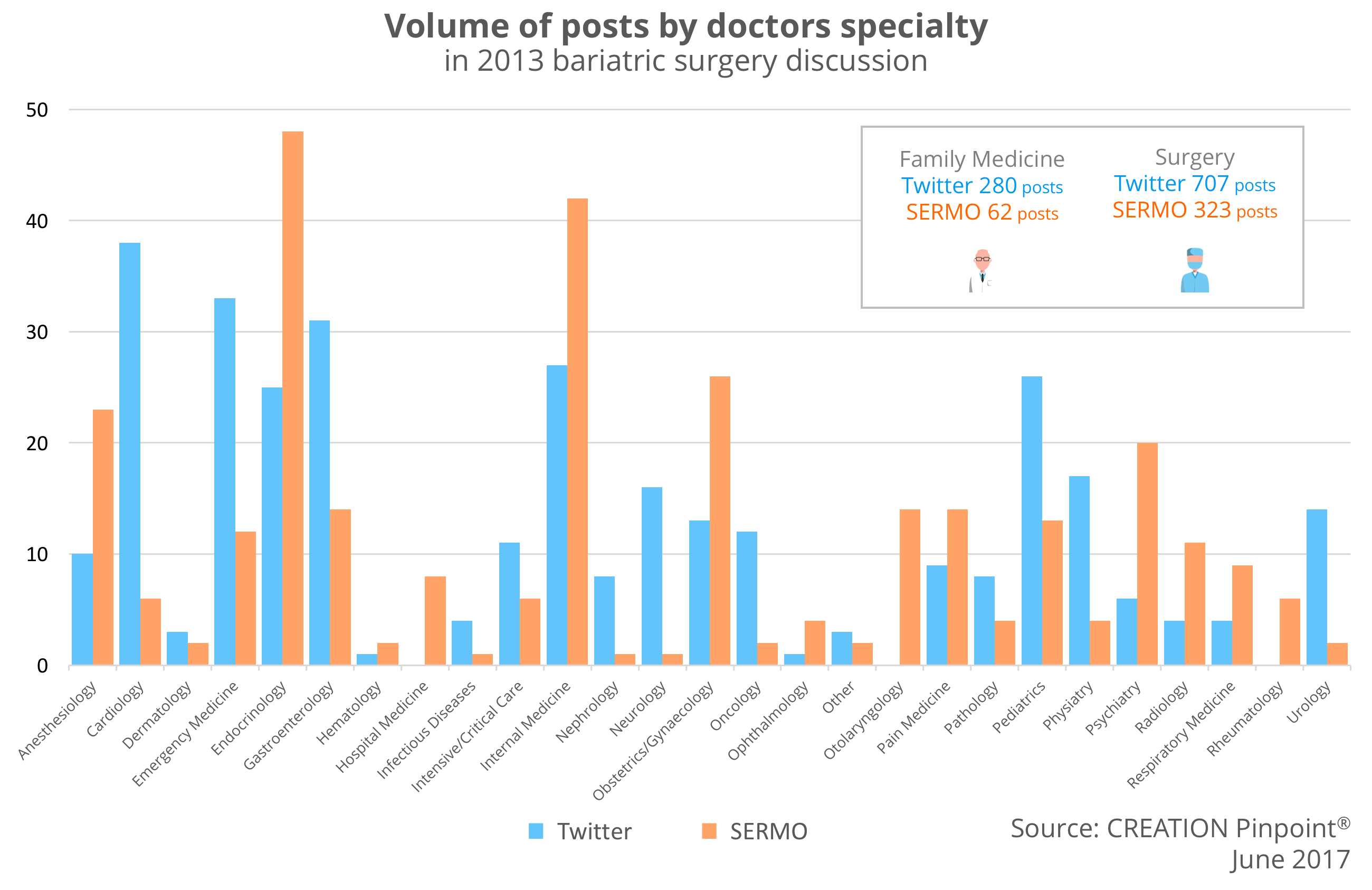 Another question we can ask of the data is did the spikes in conversation reflect one another? The chart below illustrates the number of posts relating to bariatric surgery during the year, shown by month. 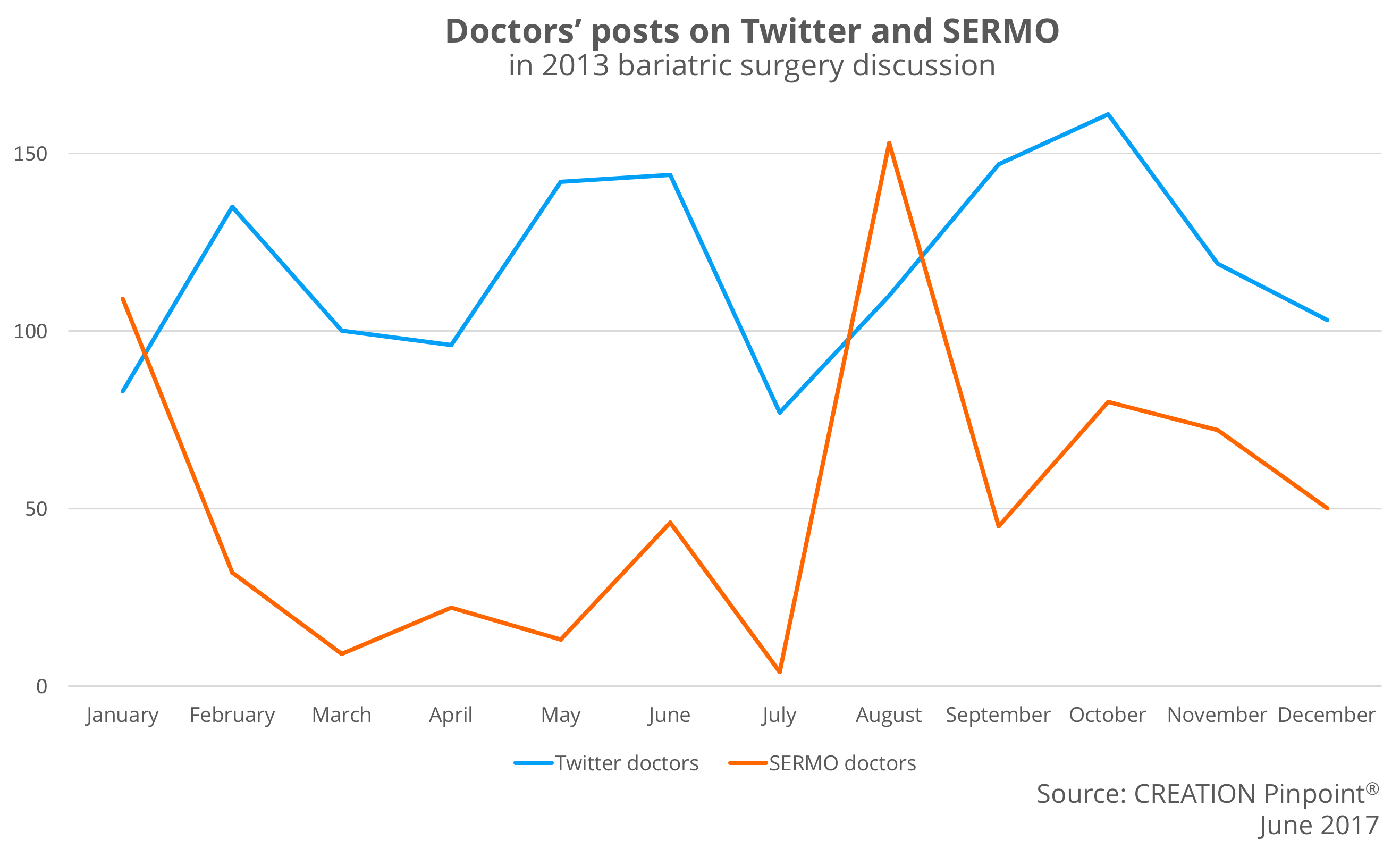 Although there were fewer doctors in the discussion on Twitter, there were more than twice as many posts during the time period.

On Twitter the conversation was more constant throughout the year compared to some extreme highs and lows in SERMO. When looking at the data it was observed that on SERMO the posts are more discussion-based. In other words, one doctor will post a comment, question or story and many others will reply and a conversation can arise in that manner. So when an interesting discussion arose in August there was a peak in the number posts. In August, a discussion around patient frustrations arose and various HCPs joined in to comment about obesity related diseases and operations, such as one Chicago based general surgeon who was involved in a passionate lifestyle vs surgery thread:

“No weight loss program, surgery or not, will work without proper education and lifestyle change…The best medical and nonoperative weight loss programs work maybe 10-15% of the time. That being said, bariatric surgery cannot work on its own. I won’t operate on patients who are unwilling to change their lifestyle…”

In contrast on Twitter we see more news and content sharing on public social media. Doctors use public social media to discuss medical issues with one another and to share stories but also as a tool to share medical information, latest trial results, medical education and messaging from pharmaceuticals. In this study, for example, HCPs discussed latest developments such as bariatric surgeon, Adam Beall sharing study results showing the effects of bariatric surgery or patients with diabetes, saying “Surgery ‘Powerful Tool’ Against Diabetes #bariatric surgery” and sharing results of a Cleveland Clinic study.

When looking at the most common words used in the conversations in SERMO versus Twitter more can be observed.

On SERMO the top used words are patient and patients with many other words indicating storytelling. This is reflective of a more discussion-based forum and the facility for HCPs to express their ideas and opinions in more than the Twitter limit of 140 characters. One illustration of this would be the word ‘I’ appeared in 3.3% of all posts on Twitter in this discussion compared to 99.7% of the posts in SERMO.

The top used words on Twitter reflect a less experiential, more ‘title-style’ post from HCPs. The words that appear the most include ‘major’, ‘risks’ and ‘involved’, indicating HCPs’ awareness that their posts can be read as public-facing messages. Other top topics in the public discussion include ‘obesity’, ‘diabetes’ and ‘weight’, indicating a public health interest, perhaps reflecting the greater volume of posts by family physicians on Twitter. Twitter conversations appear to be more influenced by external factors (news, events) than SERMO, for example, the words ‘news’ and ‘article’ were used in 148 posts on Twitter compared to 21 posts in SERMO.

These two approaches together provide a new and unique, 360-degree perspective on what doctors say online, in public and behind closed doors. Listening to doctors as they discuss matters in SERMO will add key insights to a public HCP social media study in any therapy area and, as SERMO recently announced a massive global expansion meaning it now covers more than 150 countries worldwide, these insights will eventually be available in more than three quarters of all countries in the world.

HCP conversations in this analysis were tracked using CREATION Pinpoint, the HCP insights platform from CREATION. To find out how CREATION Pinpoint can help you learn from online HCPs, get in touch.

* The Twitter bird logo is a trademark of Twitter, Inc. SERMO and the SERMO logo are trademarks of SERMO, Inc.The header image was sourced from Flickr user Concept 2 Model D, under creative commons licence.