Doctors not convinced by Boehringer on Pradaxa transparency concerns

A ‘blockbuster’ blood thinner used to prevent stroke in patients with atrial fibrillation (a condition which causes an abnormal heart rhythm), Boehringer Ingelheim’s Pradaxa (dabigatran) safety profile was called into question recently, when a report published by the British Medical Journal claimed that almost half of the deaths that had occurred whilst patients were on the drug could have been prevented by carrying out more frequent blood tests.

This led to speculation that the drug is currently not being used correctly by patients, with accusations targeted at the manufacturer,  in relation to the way it presented clinical trial data to the FDA and EMA. Critics of the drug claim that there is a possibility that the manufacturer might have downplayed the magnitude of the main side effect of the drug, which, as with other novel oral anticoagulants, is bleeding. As the patient safety aspect of the story was publicised more and more widely, Boehringer was faced with a corporate reputation management challenge as its transparency was called into question.

In response to the media scrutiny, Boehringer published a press statement made by its Medical Director in the UK and Ireland, Dr. Charles de Wet, posted a video statement from one of its US-based doctors, and tweeted links to answers to frequently asked questions. 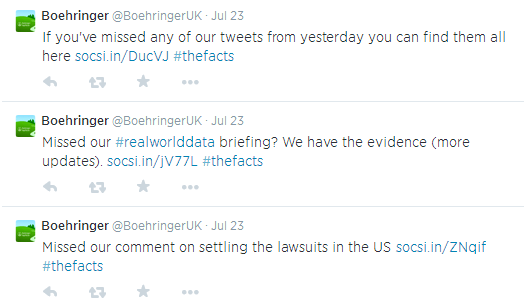 The news about dabigatran’s safety profile and the need for more frequent monitoring of patients taking it broke on the 23rd of July. A week later, we took a retrospective look at what healthcare professionals around the world had to say in social media on the issue. We studied three languages (English, Spanish and French), and included HCP comments from all countries worldwide.

Below, we can see that more than one in three HCP tweets came from the Unites States, followed by the United Kingdom, Spain, France and Canada. 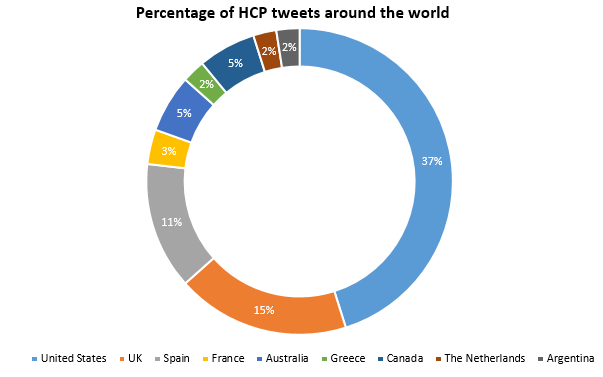 The link most shared by doctors was the report tweeted by @bmj_latest, entitled ‘Dabigatran: how the drug company withheld important analyses’, with doctors either sharing the link to the news on its own, or making comments on the validity of the claim and expressing their opinion. 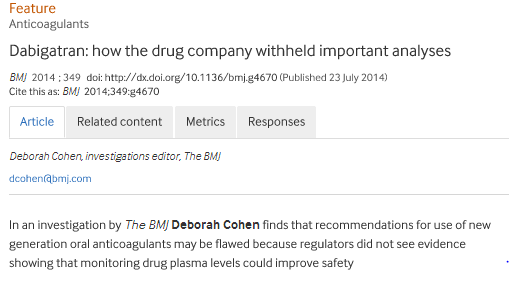 Saudi doctor Samy Alsolamy shares a link to the original BMJ report without commenting on the content, but placing the link in the #FOAMed conversation, a social media medical education movement popular among HCPs worldwide. 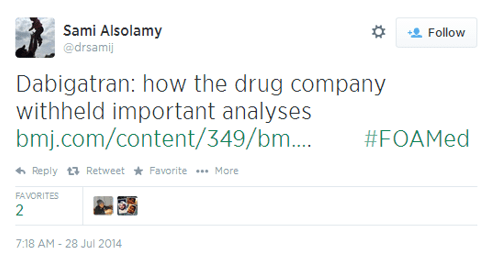 Australia-based GP Tim Senior comments on the news, adding the name of the drug in question at the end – his tweet suggests that he is addressing HCPs who have seen a similar story several times in their lifetime. 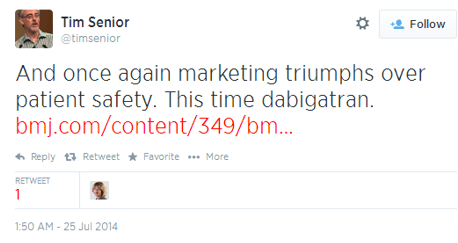 Furthermore, 27.4% of the total number of Dabigatran related tweets were re-tweets of the BMJ’s original tweets, most of which linked to the report on the BMJ website. Thus, the report itself was the most shared link amongst HCPs, and not a press statement or news report about the story.

Doctors either condemned Boehringer for withholding information or sceptically declared their lack of surprise at the news that was spreading. 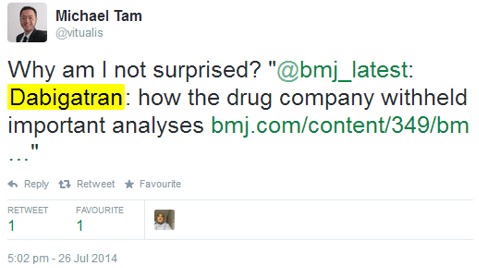 Toronto-based Andrew Petrosoniak, an emergency medicine physician, also comments on the news, speculating about Boehringer’s motives for withholding the data. 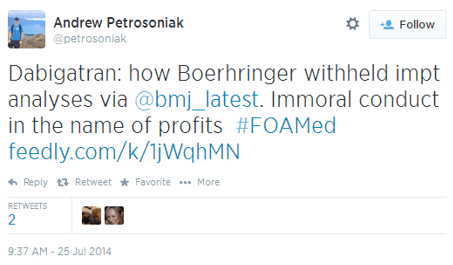 While some HCPs expressed neutral viewpoints, simply sharing the news and not commenting on the report, our study did not reveal any HCP comments supporting Boehringer’s position. 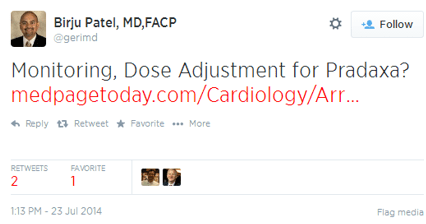 Some doctors commented on the rapidity of the FDA approval process and what this may say about inconsistencies in Dabigatran data, while others demanded an answer from Boehringer, tweeting directly at its account. The drug manufacturer responded promptly and publicly to Manchester-based GP Andy Hershon, who re-tweeted Deborah Cohen’s tweet. Boehringer claimed that the company pursues a policy of transparency, directing Dr Hershon to its website. 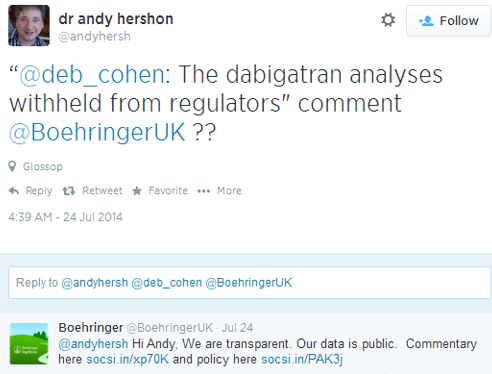 Online HCP conversations around the topic have remained devoted to patient safety as a crucial value of medicine, with the community of HCPs remaining within somewhat of a consensus on the topic – none of the HCPs we analysed tweeted messages in support of Boehringer’s statements. When examining the way other recent stories (such as the bariatric surgery for diabetes story) have unfolded, we found that there was a level of controversy among HCPs that is not present within the conversations around Pradaxa, with a vast majority of HCPs convinced by the BMJ-published report.

With such sceptical remarks around the issue, I wonder this says about big pharma’s reputation among HCPs. Watch this space for part two of the story, when we look at whether or not HCPs’ views on the dabigatran issue change over time.