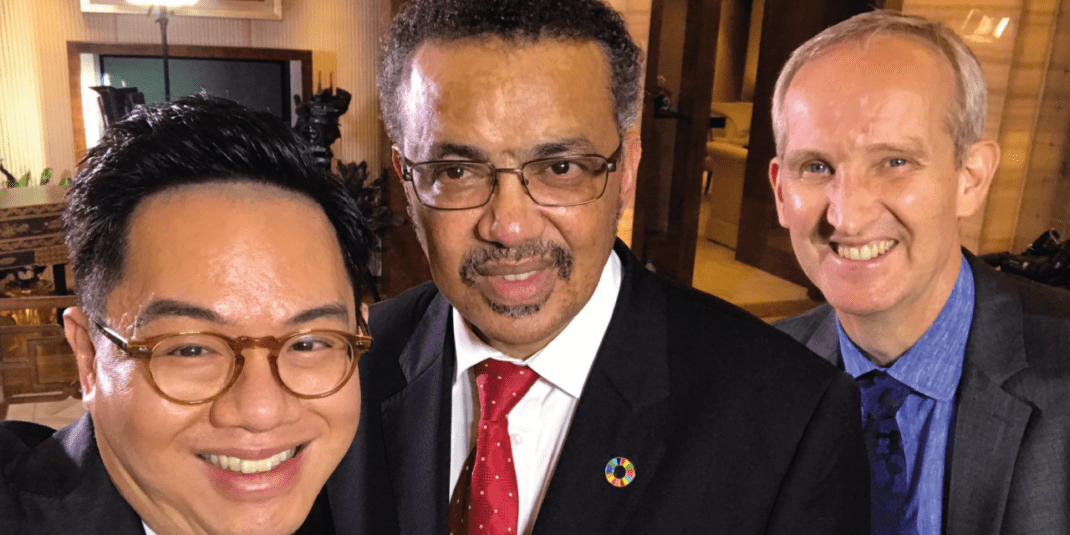 Dr Tedros Adhanom Ghebreyesus has landed the top job in international public health. The former Ethiopian Health Minister now takes the office of Director-General of the World Health Organisation (WHO), replacing predecessor Dr Margaret Chan. A strong shortlist of three candidates was judged by 194 WHO member countries with Dr Tedros nudging past his rivals to receive the accolades in the May election. The incoming Director-General is highly regarded for his services to public health and African affairs; former president Bill Clinton described him as ‘one of the ablest public servants I ever worked with’.

More and more, high profile figures utilise social media to enhance their public image or support an agenda. One significant luxury afforded by social media is the ability to share ideas and resources with peers and interested parties instantaneously. Over the course of the past few years, Dr Tedros has been steadily growing his online presence in support of his offline position and he particularly used this to his advantage in the build up to the WHO election. His Twitter content reaches healthcare professionals (HCPs) from all over the globe both directly (as shown in the HCP network map below) and indirectly through extended following relationships. 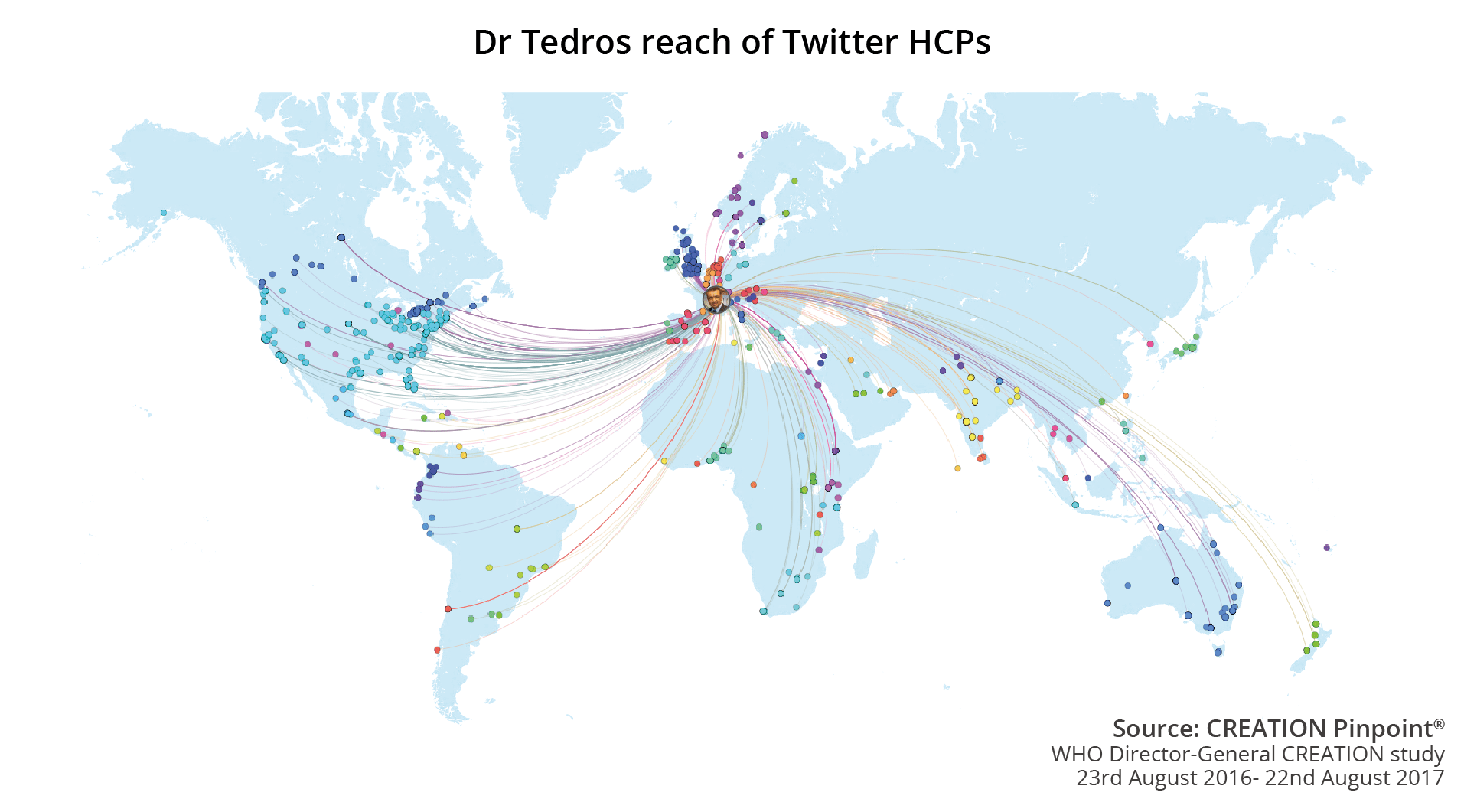 Ethiopian Dr Tedros, is well positioned to reach a demographic that is typically less well represented on online platforms. People in many African nations are often less active on social media, however Tedros demonstrates how individuals from such regions can become online digital influencers, producing content viewed around the world. His online activity has inspired others in less active social media countries such as Ethiopia.

Dr Tedros has a wide reach among HCPs, however this network makes up less than 1% of his 260,000+ Twitter followers. The events surrounding the WHO election inevitably cast Dr Tedros into an even greater social media focus, and the new Director-General responded to the increased exposure accordingly. 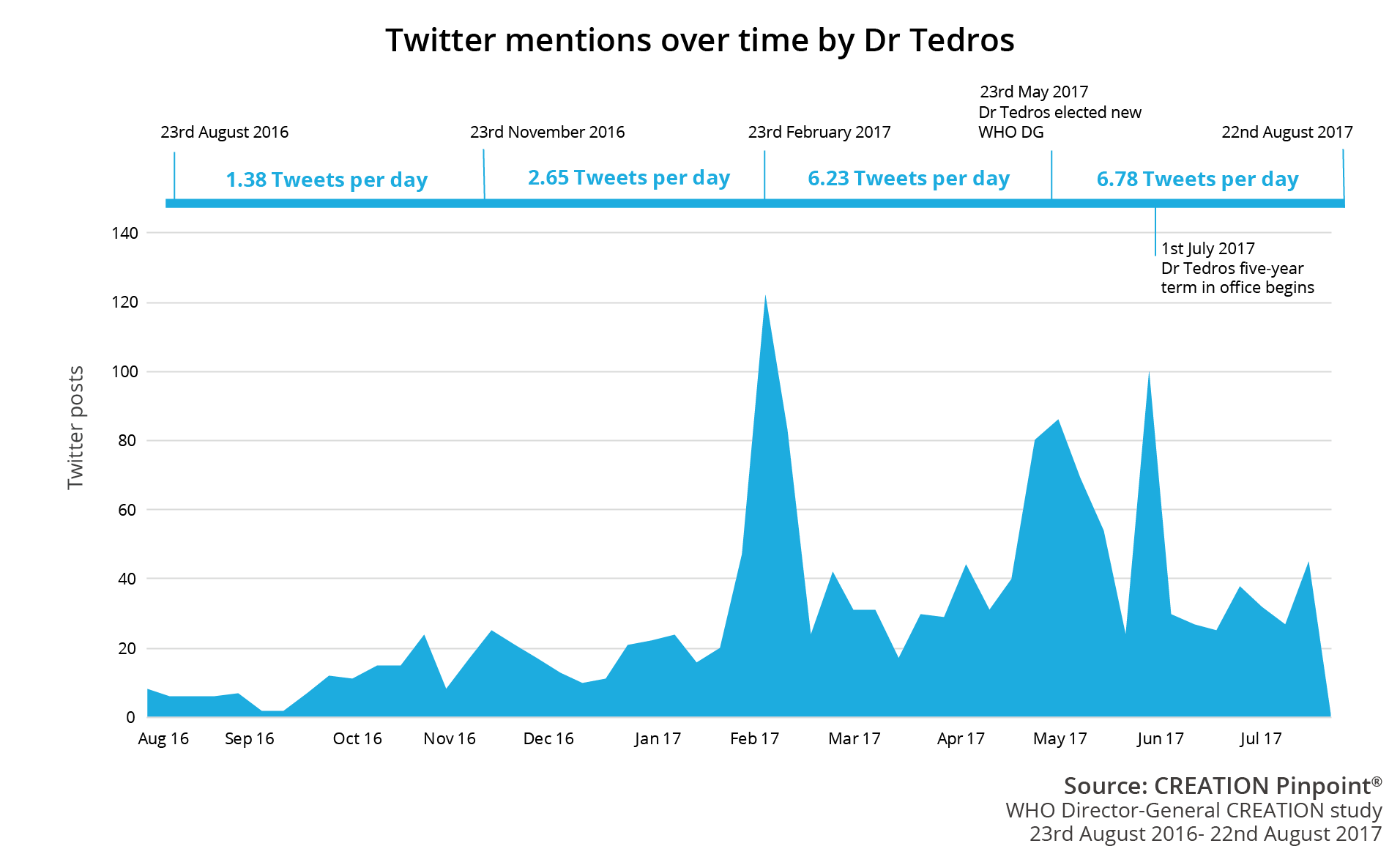 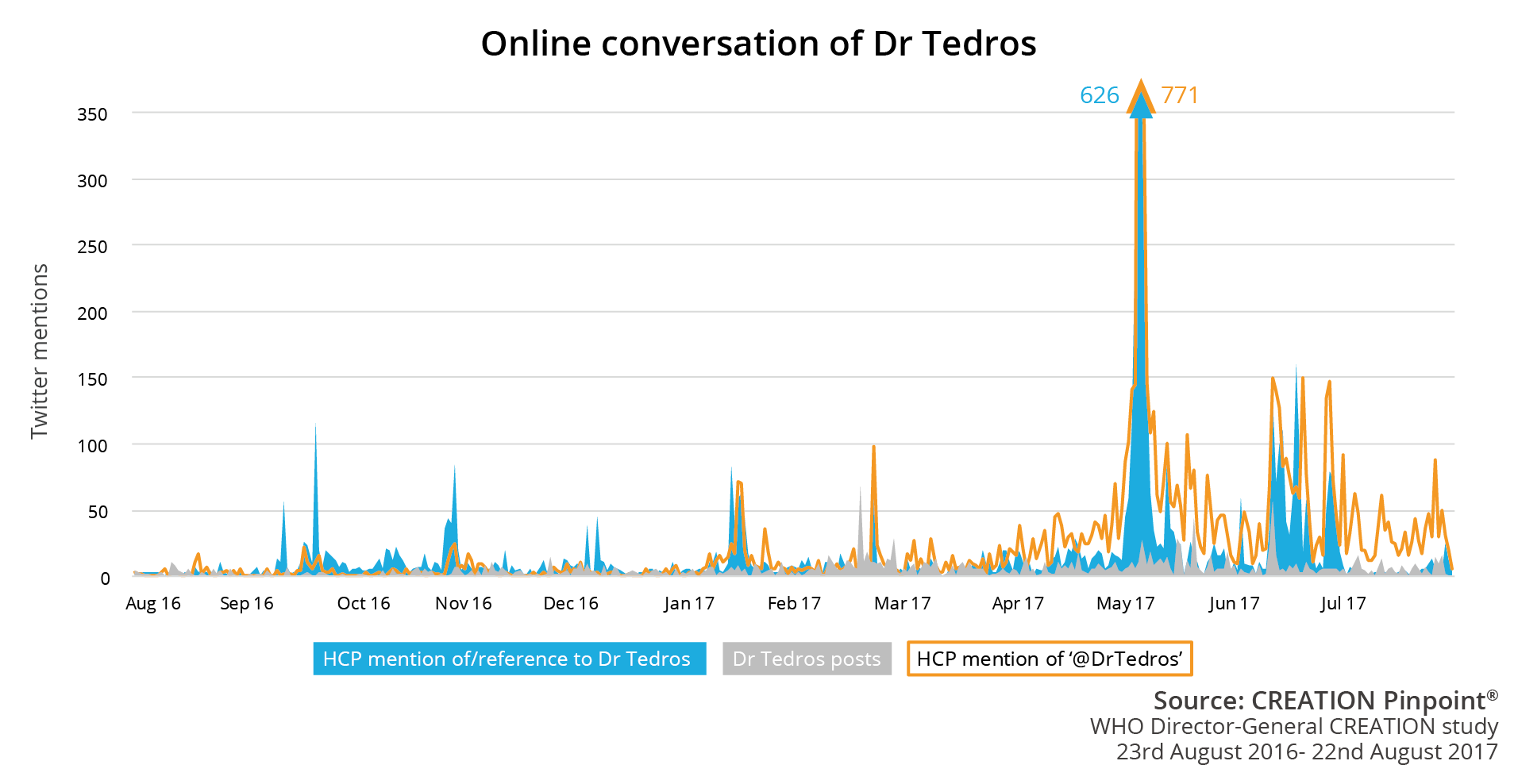 Dr Tedros’ increase in online activity has coincided with a significant upward trend in conversation surrounding the new Director-General. A relatively steady escalation in discussion exploded into life on the 23rd May, the day on which the WHO final election took place as Dr Tedros’ online presence permitted him to receive the social media spotlight and many took to Twitter to have their say on Dr Tedros’ new status.

Unsuccessful Director-General candidate Dr David Nabarro shared his congratulations and prompted others to back the new man. The post was Retweeted 362 times and Tedros used Twitter to personally thank Nabarro for his support.

Congratulations to @DrTedros on his new role as Director-General of @WHO. I urge everyone to unite behind him & his vision #WHA70 pic.twitter.com/kPcQcFWJ8M

Others skipped the sentimental greetings and got straight to business.

#WHO recently praised famine-based "#publichealth" in N Korea. Will @DrTedros restore sanity or double down on the #NCDs #con?#wha70 pic.twitter.com/Go9zoUhYFT

In the lead-up to the WHO election, the Twitter conversation was dominated by mentions of David Nabarro and Sania Nishtar whereas Tedros took a smaller share of the discussion, despite having a much greater number of followers. However, in the months since, two-way engagement between Tedros and his followers has taken off whereas conversation about the Nabarro and Nihtar has subsided.

Dr Tedros holds an influential position both on and offline. Online, he posts original content as well as retweeting relevant material. Dr Tedros also exhibits a high degree of engagement, with 45% of his 879 original mentions during the study period posted in response to a comment made by another Twitter user.

Interactions of this nature also saw Dr Tedros thanking those who had used Twitter to credit his work. Similarly, individuals and organisations often look to engage Dr Tedros, with 1,425 mentions of his Twitter handle (not including Retweets). Dr Tedros takes an interest in what social media users are saying about him and on 63 occasions he chose to retweet a comment that someone else made in response to one of his own posts.

A rare privilege with a rare leader – after a great interview with new @WHO Director-General @DrTedros #comingsoon #globalhealth pic.twitter.com/vee4PBFWCx

Thank you James. Pleasure was mine. Thanks so much for the opportunity. https://t.co/cOymtWerPD 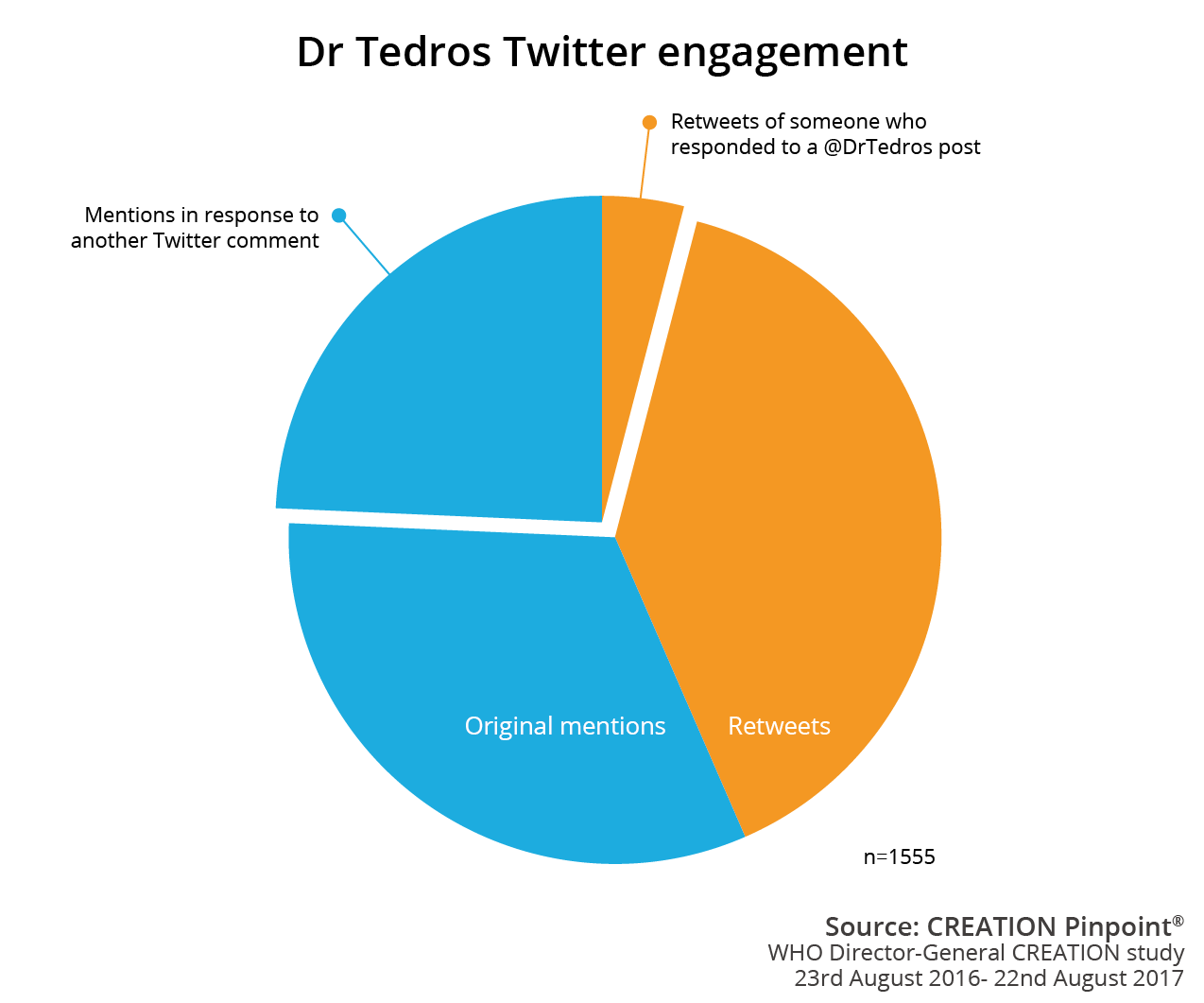 Social media exposure is becoming a much more common component amongst people of prominence and Dr Tedros is no different. Dr Tedros has developed a well-recognised and visible online presence which allows him to interact with HCPs and non-HCPs which would not be possible by other means. Could this be the dawn of a new era of engagement for global public health leadership?