At the beginning of the year, a report by IMS highlighted that Tuberculosis was one of the areas of health most accessed on Wikipedia, with roughly 4.2 million visits to the page per month, highlighting the significance of this disease. We used Creation Pinpoint to take a closer look at why tuberculosis is an area of interest for the public by compiling thousands of healthcare professionals’ tweets about tuberculosis and analysing the results for the time period between the 1st of January and the 1st of June this year. Here’s what we found… 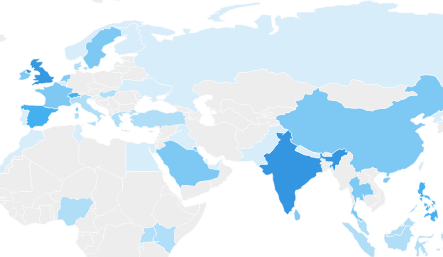 HCPs in India contribute 7% of global posts about tuberculosis

India is the country with the most cases of tuberculosis worldwide, which would explain the unusually high volume of tweets around this topic area coming from HCPs in India. Here is what some of India’s healthcare professionals are sharing about tuberculosis:

New-Delhi based surgeon Shelly Batra links to a blog post on tuberculosis written by herself and published by the World Bank on their website: 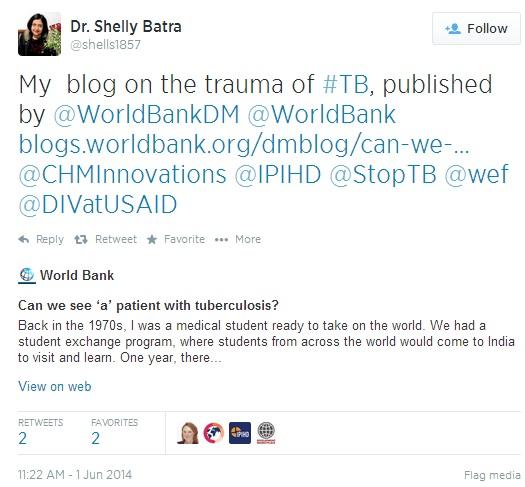 The blog entry talks about India as a region that holds a significant amount of the world’s TB burden. Shelly writes that despite this, in some parts of the country, TB sufferers are still ostracised and there is still a level of stigma in getting help and treatment from a social perspective. 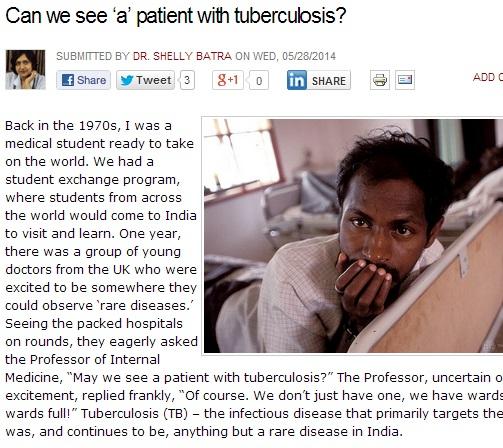 Surat-based bariatric surgeon Vikram Lotwala shares an article about a mobile app that alerts doctors whenever there is a surge in TB cases. 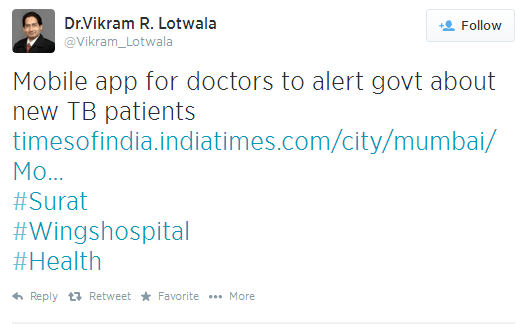 Below, a New-Delhi based HCP responds to a London-based Twitter user’s question about TB campaigns and the difference between preventative tuberculosis communications initiatives and those to do with polio. 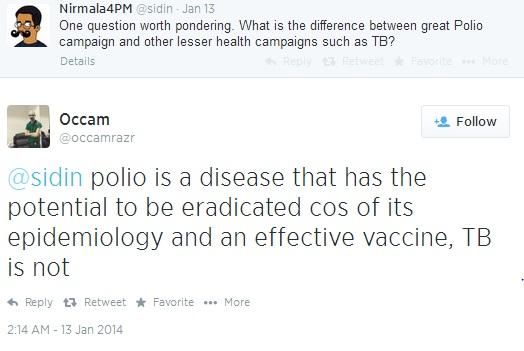 2. HCPs are leveraging the increased exposure World TB Day offers (24th of March) to remind the public that TB is still an epidemic in certain parts of the world and it has not been completely eradicated.

Below, the Director of the European Centre for Disease Prevention and Control, Mark Sprenger’s tweet expresses his wish to see less cases of multi-drug resistant tuberculosis and facilitate adequate treatment processes for it. 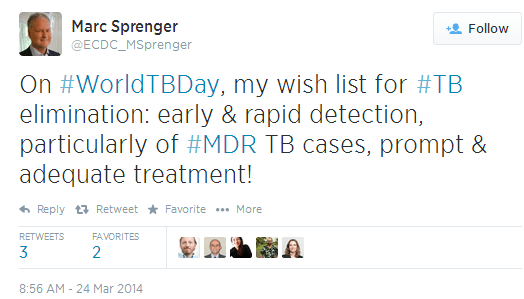 Below, a Pakistan-based HCP uses the hashtag #WhoTalksTB (a hashtag set up by the WHO on World TB day for people who wanted to learn more about the epidemic) to reach out to the medical community by asking what drugs were the best options for patients who had become resistant to the standard treatment for tuberculosis. Mario Raviglione, Director of the Global TB Programme at the World Health Organization, replies with a useful set of treatment guidelines. 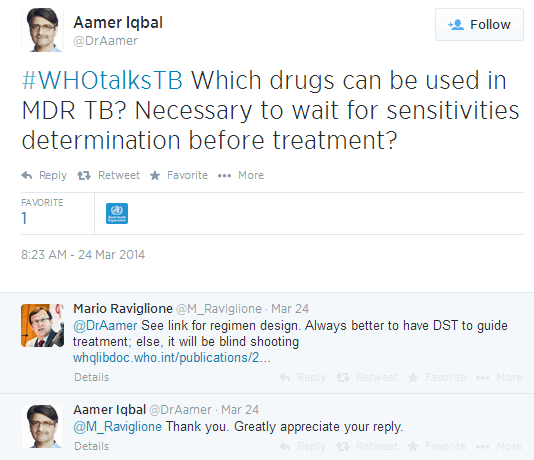 The hashtag #worldtbday is used by doctors worldwide to share TB related information, such as in the example seen below, where London-based HCP Matthew Knight uses the hashtag to share a report on tuberculosis.

3. Multi-drug resistant tuberculosis is one of the topics that have attracted most interest in this area. Twitter, its format being comprised of short bursts of digestible information is a good medium for drawing attention to this reality – the escalation of the number of multi drug resistant TB cases can be prevented through education around the correct administration and usage of antibiotics. Around 19.77% of tweets were related to drug resistance in some way, making up a significant proportion of tuberculosis tweets (note – 431 out of 2179 mentions contained the word ‘resistance’ or ‘resistant’).

Below, 3 Australia-based HCPs discuss the technicalities of the health system and how reforms could have a negative impact on the number of drug-resistant TB cases. 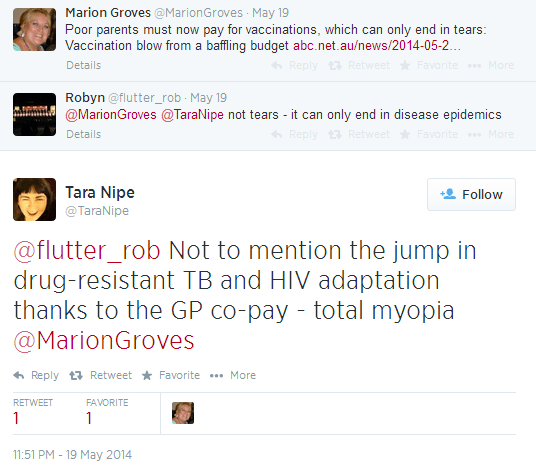 Spanish HCP Roi Pineiro shares a report about paediatric drug-resistant TB in Madrid, as seen below:

Dr. Rajeev Rahi, a surgeon from New Delhi, links to an article that talks about ways in which multi-drug resistant tuberculosis can be combated. 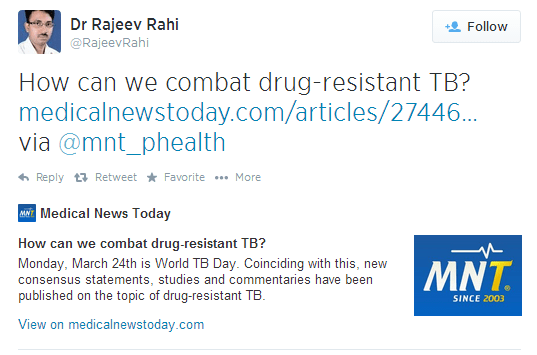 4. Doctors are using Twitter to bring to light little-known issues to do with tuberculosis, such as the link between diabetes and TB. However, this has not become a massive topic yet (only around 1.9% of the total conversation talks about diabetes – a tenth of the volume that is centred around multi-drug resistance) but we are expecting it to become more and more of a topic of interest as more studies around it surface. So far, however, doctors interested in the therapy area are still sharing links that are of interest:

US-based HCP Eric Brown shares a link to a study about diabetes and risk of tuberculosis relapse, as seen below:

Looking at the year’s most visited Wikipedia pages has, in this case, provided a useful hypothesis for more in-depth investigation of current medical issues, one of which is the development and dissemination of drug-resistant strains that can turn into full-blown infectious diseases. This has been on the radar for quite some time as a topic in the public eye but by studying HCP conversations using Creation Pinpoint, we were able to look at what tuberculosis related topics doctors around the world thought were newsworthy. Containing virulent strains that are, in addition to being an epidemic in certain parts of the world, strengthened by their drug-resistant properties remains a challenge, especially when considering the number of victims it produces every year: more than 1 million. Recently nicknamed ‘The White Plague’, tuberculosis is a condition that needs to be tackled strategically on a global level. It is definitely a topic that we at Creation Healthcare will be following and we hope that in the future, HCPs around the world will continue sharing dependable online resources with each other and collaborating in a digital environment that fosters useful real-time discussions around the subject, as education of both the public and each other is one of the keys to bringing about real change in diseases whose occurrence can be prevented.