In 2008, British athlete Jessica Ennis faced one of numerous setbacks in her sporting career after injury kept her out of the Beijing Olympics. In the run-up to the London 2012 Olympics, she worried that further injury would end her hopes of competing in the Games. Yet fear of injury and past setbacks did not prevent her from winning the gold medal in the heptathlon, breaking records on the way.

It is a similar story for some pharmaceutical companies in social media. The path taken by pioneers of new digital channels is well documented by Healthcare Engagement Strategy and includes setbacks, lessons learned, and challenges overcome. It also includes the triumph of seeing great business and health outcomes – the best are recognised each year in the Healthcare Engagement Strategy Awards, each of which leaves a legacy of great practice and lessons learned.

Last year I wrote in pharmaphorum about GlaxoSmithKline’s Facebook page, pointing out that the company was one of a very few deliberately engaging consumers in two-way dialogue, even before Facebook made open walls mandatory. The page was in its infancy, yet displayed a systematic approach to engaging and responding to comments. I suggested then that it provided a platform for testing a two-way engagement model that would surely be at the heart of pharmaceutical corporate communications well into the future.

Eleven months have passed since my last review, representing a long time in the digital age, with much water under the bridge. GSK’s role as partner to the London 2012 Olympics provided the setting for a major advertising campaign by the company which includes television, print, outdoor and digital media. Assets created for the advertising campaign were also deployed across GSK’s social media channels including its Youtube channel, Flickr photostream, Twitter profile, and Facebook page. 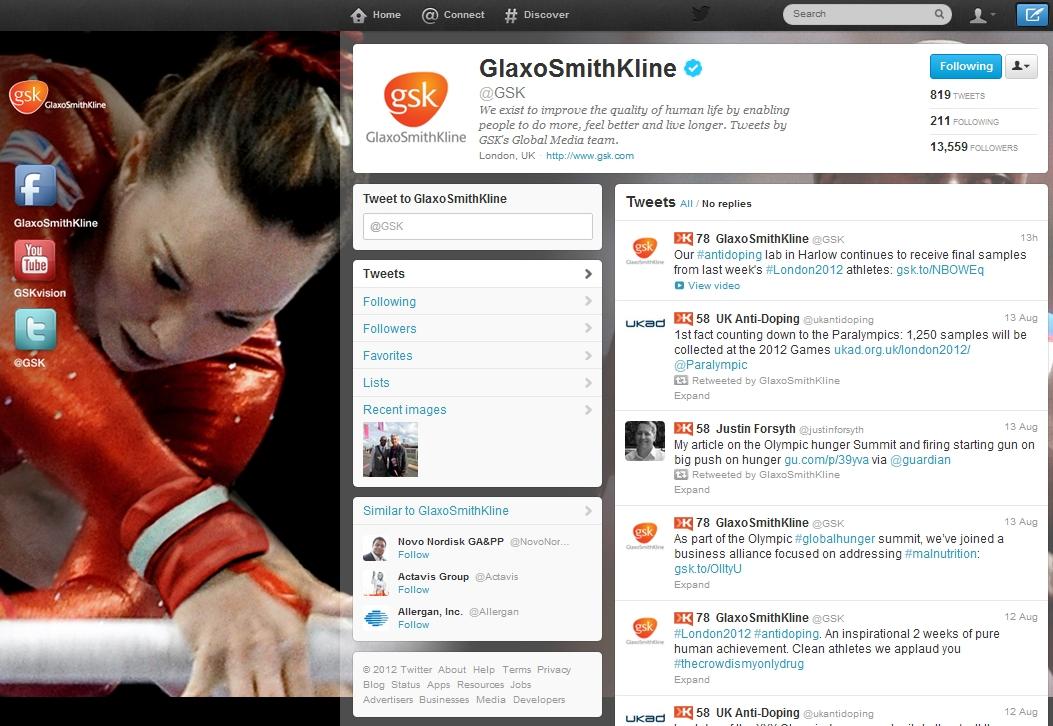 The assets have been used extensively on Facebook, as well as frequent updates about GSK’s anti-doping laboratories provided for the Games, and content relating to competitors, results, and other related community activities. When GSK employee Sophie Troiano competed for Team GB in the Women’s Team Foil, the page shared images from the company’s advertising as well as from Team GB’s Facebook page. The shared images became a hub for positive encouragement among supporters and GSK employees alike. 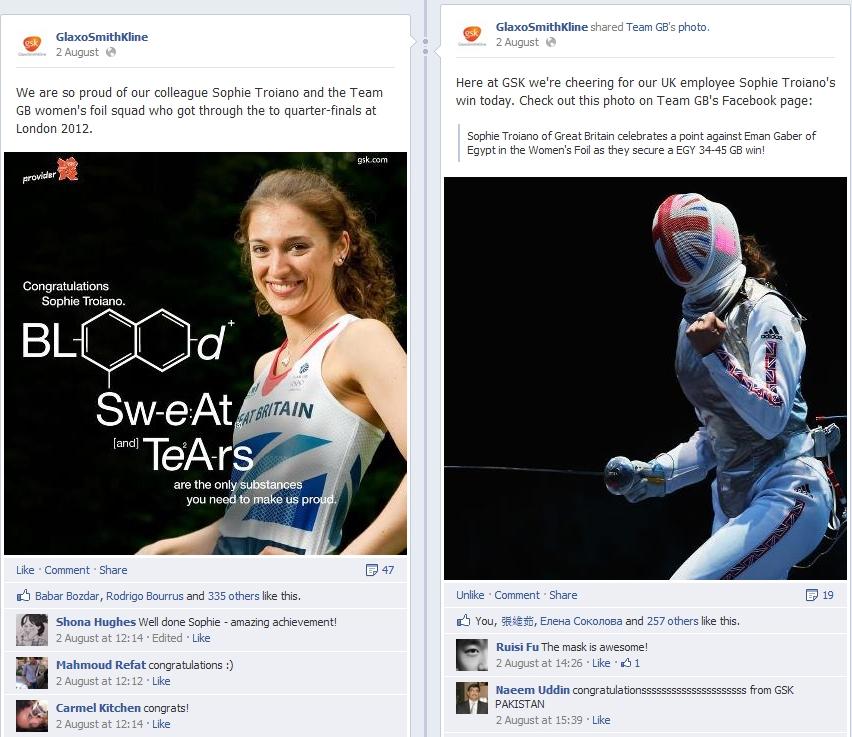 Images of GSK employee Sophie Troiano competing in the Games attracted comments and likes from supporters and colleagues worldwide.

Exploiting the global interest and positive feeling towards the Olympic Games has yielded a significant peak in engagement for GSK’s Facebook page, which at the time of writing has just short of 50,000 likes. According to Facebook, the page gained almost 19,000 new likes in the first seven days of August, and just days later, over 43,000 people were actively interacting with the page in just one week.

As the public profile of a corporate brand grows, any detractors will surface and social media provides an easy platform for them to express views. Handling detractors on Facebook is therefore a common challenge for all big brands using the platform, as can be seen in the experiences of other London 2012 partners.

Among the comments on Procter & Gamble’s Facebook page, for example, where the company posted assets from its ‘Thank you, Mom’ campaign activity around London 2012, are accusations of sexism because the campaign’s messaging focuses on mothers using their products.

Criticism on British Airways’ Facebook page, another London 2012 sponsor, includes complaints about its pricing and even its advertising on social media. Meanwhile, the list of criticism faced by Olympic sponsor McDonald’s on its Facebook page is extensive and diverse. Yet with almost 22 million likes and over 250,000 people actively engaged every week, it appears that McDonald’s focuses its Facebook activity on sharing and posting positive content rather than becoming distracted by its critics.

For GSK, increased engagement and the exposure of its brand around the Games have provided a platform for people to share a wide range of views about the company. While many have posted positive support and encouragement on its Facebook page, others have posted criticism on topics including animal testing, recent lawsuits, and profit motives.

GSK’s response to comments has broadly reflected the systematic principles I outlined in use on their page last year. Now with significantly increased levels of engagement, the process has been put to the test and appears to be holding up well, although the way criticism is handled is not entirely consistent.

“You keep removing my comment about your 3 billion dollar fine for bribing doctors to prescribe antidepressants to children. It’s on the BBC news website, what’s ur problem ??” reads one of over 600 comments under a photo of British gymnast Beth Tweddle that has been liked over 23,000 times and shared over 700 times. “I thought we lived in a democracy that valued free speech and yet some of the comments raising legitimate concerns about GSKs integrity keep disappearing from this page…how very odd…” reads another.

The page’s ‘About’ tab includes a set of Terms of Use explaining that the company may have to remove certain content, including of course anything mentioning prescription medicines but also content that “Is not related to the post under which it appears”. Presumably it is based upon these terms that comments have been deleted, yet others remain including several links posted by users to news stories about GSK lawsuits.

On balance, GSK might wonder whether it should not have deleted some of the critical comments, since the responses from users whose comments have been deleted appear to have generated more ‘likes’ from others than some of the criticisms that remain on the page. Overall, positive comments far outweigh criticisms, and in some cases users have fought back on behalf of the company: “Let it go… – this is about the Olympics and a fantastic GB gymnast!” responds one user to draw the conversation back on topic.

Aside from those comments that are deleted or left alone for other members of the community to counter, others are responded to where there is an opportunity for the company to set the record straight:

“…why does every single company love to hide the facts that the main reasons they do these things is for money…  please one day show people some truth”, reads a comment from a Facebook user in response to a GSK post about its Malaria Vaccine Project. GSK’s reply is addressed directly to the user, and posted in public: “…We’ve been working to develop a malaria vaccine for over 30 years and the very last thing we want is for a vaccine not be used because it is too expensive. For that reason we have made a rock-solid commitment to price this vaccine as low as possible – we will do all we can to ensure that the malaria vaccine is available for those who need it most…”

Developing and applying principles for engagement, and knowing when to delete or leave comments requires boldness and conviction, supported by clear guidelines. Every comment deleted is a step away from openness, yet it will always be necessary to delete certain comments. GSK’s approach is bold – selectively leaving, deleting and responding to comments – yet overall, I have a sense that the strategy enhances the brand significantly.

With increased engagement and experience in social media, a company’s principles and guidelines will develop and mature. This season of heightened social media activity around London 2012 will certainly leave GSK with some experiences to evaluate after the dust settles.

How to become an Olympic pharma brand

If GSK’s current and future success on Facebook can be likened to the perseverance of an Olympic athlete, it is worthwhile considering that Olympic success does not come overnight. GSK has a track record of digital innovation spanning several years. As far back as 2008, we identified GSK as one of the early pharma pioneers of blogging, and the company has continued to innovate since then, including the launch of its open Facebook page early last year.

I believe that this legacy of the company’s early adoption of social media channels is an important foundation that has given GSK the capacity to engage consumers around the Olympics today.

With very few exceptions, the athletes who became London 2012 medal winners trained day after day, year after year to prepare. They overcame setbacks, injury, criticism, suspicion. They were supported by coaches and encouraged by peers. Not one of them ‘just turned up’ at the Games, rather, they deliberately and consistently prepared, with a passion and drive that established them as champions long before the Games began.

In sports, each winning athlete and their coach work as a team. The coach advises, trains and spurs on the athlete, analyses the competition, identifies weaknesses and opportunities, and develops winning strategies.

The parallels with social media among pharmaceutical companies are striking. It is not enough to simply ‘turn up’ on Facebook, and expect to compete. Yet as with Olympic sports, as the bar is raised by successful athletes, a legacy of lessons learned is left for others to build on. This is why we publish Healthcare Engagement Strategy; why we recognise the world’s best practices in our HES Awards every year; why we develop and put on training courses; and why we coach pharmaceutical professionals and teams in social media engagement.

Daniel Ghinn coaches healthcare organizations to thrive in the digital age, as CEO of global consultancy Creation Healthcare. He is also the father of a young aspiring Team GB gymnast who trains 24 hours every week.