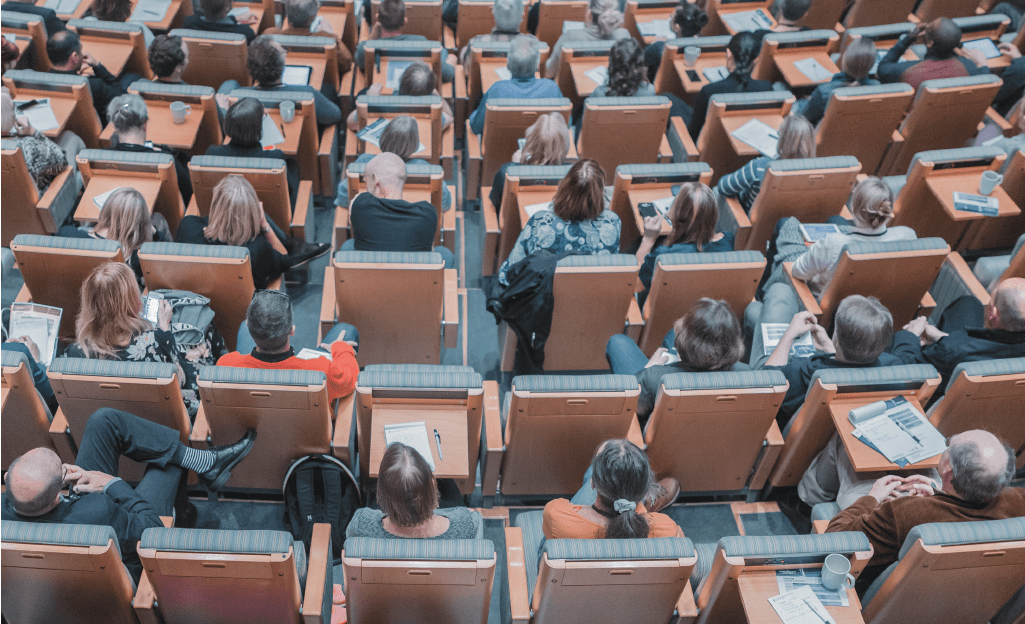 The American Society of Clinical Oncology (ASCO) and the European Society of Medical Oncology (ESMO) annual congresses are some of the most prestigious and well attended by healthcare professionals (HCPs) in oncology. Although the associations that run the meetings are based in the United States and Europe, respectively, they draw attendees from all around the world. Congress meetings such as these not only provide an opportunity for HCPs to connect and engage with the pharmaceutical companies who sponsor, present and attended these congresses, but also help in starting global conversations between HCP peers online.

Using CREATION Pinpoint we tracked HCPs’ online engagement and interactions with pharmaceutical companies active in the oncology space (September 2016 – June 2017). At over 30,000 mentions directly relating to the ASCO 2017 congress and nearly 2,000 relating to the ESMO 2016 congress from 5,485 unique HCP authors globally, the evidence is overwhelming that HCPs are engaged and talking online during congress. When looking at posts that directly mentioned, were directed towards or engaged with pharmaceutical companies by name, clear insights into HCP online behaviour can be identified.

What did HCPs respond well to?

Social media platforms like Twitter and Facebook among others, have created new avenues in which pharmaceutical companies can take part in wider discussions in therapy areas they want to be seen as partners and innovators in. Looking at the interactions between HCPs and pharmaceutical companies, HCPs responded favourably and engaged most with companies who showed a number of traits. HCPs engaged with the companies if they responded effectively and quickly to HCP needs, showed an awareness of the influence social media plays in information sharing, and also if they provided a common cause, or platform, for HCP engagement.

When companies responded quickly and effectively to HCP needs

AstraZeneca demonstrated their ability to quickly respond to feedback they received from their audience, on how they should interact with them online; through posting 5 of their social media commitments in a simple yet easily sharable post on Twitter. AstraZeneca’s openness about its commitment led to the post being one of the most widely shared among pharmaceutical company content by HCPs at ASCO, with 61 HCP shares. In contrast, ESMO 2016 didn’t see any content from a pharmaceutical company being widely shared by HCPs, with HCPs instead favouring the sharing of new study findings.

Attending #ASCO17? We listened to your feedback & we are using Twitter to elevate patient and expert voices: https://t.co/wIn91iJEp7 pic.twitter.com/6H8ck6IIOR

👍👏@AstraZeneca hope other companies will follow ur lead #ASCO17 https://t.co/BjvsLDH341

When companies provided a common cause for HCP engagement

HCPs were more likely to respond and engage to pharma messaging where companies were seen to promote research, HCP opinion leaders and schemes that support greater patient advocacy (that reaches and impacts beyond that of the the company’s latest drug).

What did HCPs not respond well to?

However, where messaging is broad and not specifically focused on an HCP audience, engagement from healthcare professionals beyond retweeting a post is limited. Such was the case with Merck who saw large scale popularity with both HCPs and the public by launching the hashtag #DearCancerHeroes. The hashtag created a platform for patient advocacy to help encourage those who are battling cancer, however it was perhaps not specific enough to draw out any significant or meaningful interactions from HCPs with Merck. 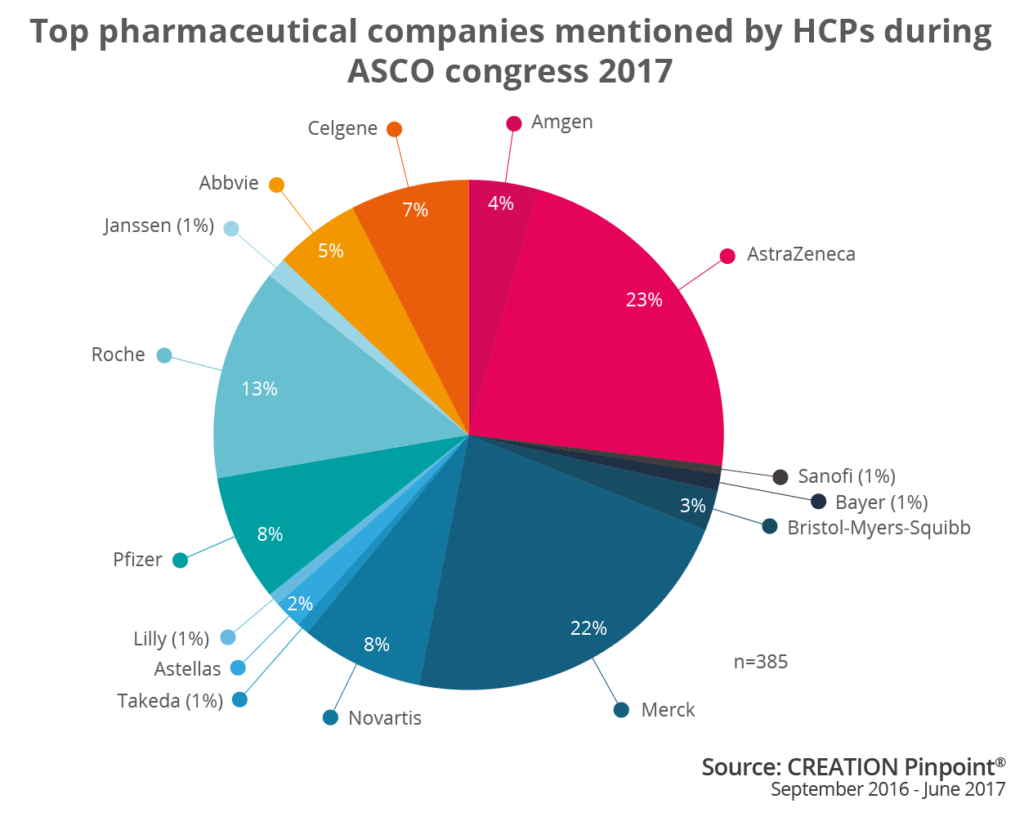 Of Merck’s mentions by HCPs, 25% were centred around new trial data, specifically on Keytruda, which saw no direct interaction of HCPs with Merck – although it did spark conversations between HCPs and their peers. Despite having been named by some sources as one of the 10 top influencers of ASCO 2017, HCP engagement with Merck did not go much further than retweeting the original post.

The same was true for Roche, Novartis and Pfizer, the third, fourth and fifth most mentioned pharmaceutical companies at ASCO 2017. A significant percentage of posts related solely to trial and study findings, where HCPs spoke about the company but did not engage with them. 65% of Roche’s mentions related to trial data; 43% of Novartis’ and 29% of Pfizer’s – all who saw no HCP engagement with them past the sharing of information. 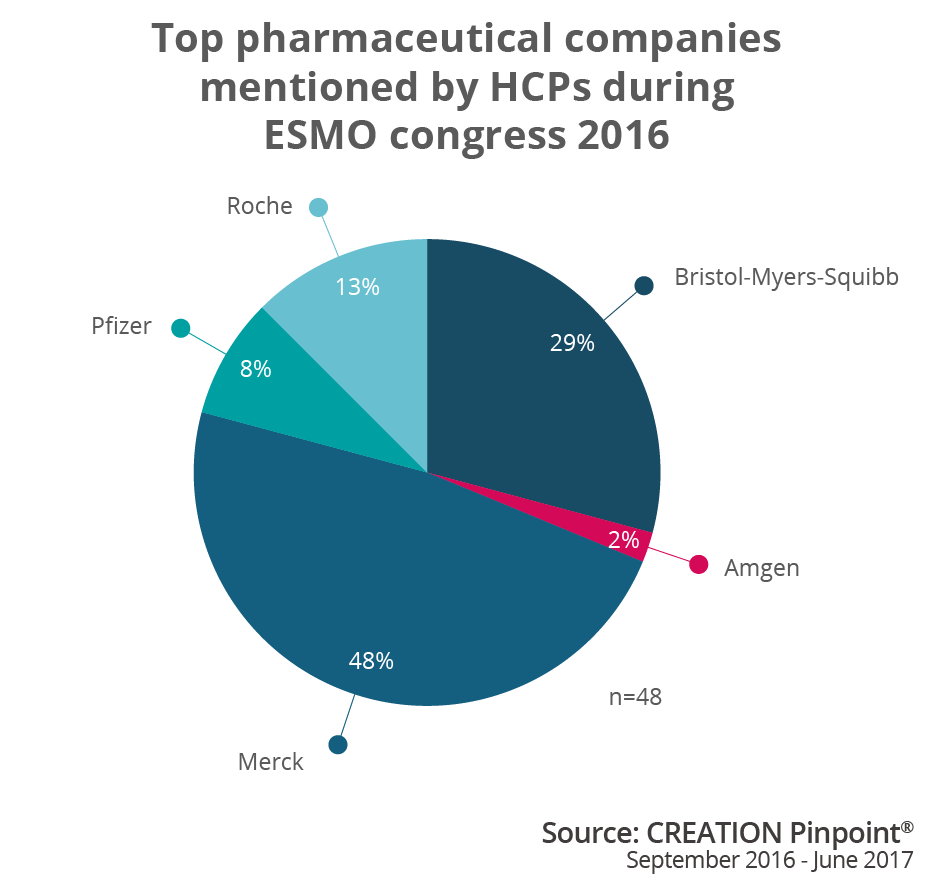 Although ASCO was a larger meeting than ESMO, it is possible that this lack of effective engagement could also have been influenced by cultural differences; with European HCPs being seen as more reserved in their interactions with ‘Big Pharma’.

At ASCO, for example, pharmaceutical companies released graphics of upcoming talks or study findings that were easily sharable and helped raise awareness of what the company was doing in that therapy area among HCPs. Although this did not generate large scale engagement directly with the pharmaceutical company it did raise that company’s presence and awareness online to HCPs.

When pharmaceutical companies do not engage in the online conversation during congress by providing a platform by which HCPs can engage with them, they stand to miss out on key opportunities that can lead to cultivating online HCP advocates and to a greater understanding of the needs, concerns and interests of their HCP customers.

For more insights of the online behaviours of HCPs and pharmaceutical companies visit our homepage or sign up to our regular eJournal.

The header image was sourced from Unsplash user @minera