With many epidemics, the quick dissemination of information about preventative measures to the public is one of the key ways to slow their spread. For diseases like Ebola, timing is crucial in identifying patients, isolating them, and ensuring the rest of the public takes precautionary actions. Luckily, with the advent of social media, this has become easier and easier. Although most African countries may have only a small percentage of the population connected to the Internet, places such as Nigeria have a staggering 130 million phones active [1]. This has presented a great opportunity for initiatives in Ebola education. Although there have been 8 deaths out of 20 cases so far, Nigeria has recently been declared ‘Ebola free’ [2]. In addition to the country’s tireless identification and surveillance efforts, this may also be attributed in some part to the social media efforts of HCPs focused on education and prevention.

Social Media and Ebola in Nigeria 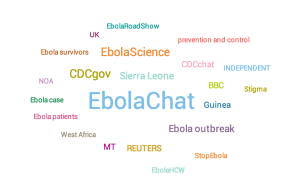 Ebola Alert was created by Dr. Lawal Bakare, a Nigerian dentist, with help of other volunteers, with the aim to halt the spread of Ebola. The twitter handle @ebolaalert was set up to provide the public with small, accessible bits of information about the disease as well as counteracting the spread of rumors such as miracle cures. Frequent reminders to wash hands and cook meats well or answers to common questions may seem trivial, but this information will undoubtedly be remembered not only by the reader but shared with others by word of mouth. 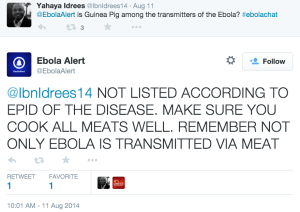 Ebola Alert tweet replying to a question is retweeted and favourited

The account has grown to more than 72,000 followers from all over the world and they have also created the #StopEbola hashtag and hosted #Ebolachat online discussions. Ebola Alert is also sharing news and resources through a telephone hotline and Facebook. Below is an example of how the Facebook account is utilizing images, tagging, and hashtags in order to create engagement around improving the infection control practices of healthcare workers. The post is then shared, liked, and commented on, leading to a larger reach across the network. 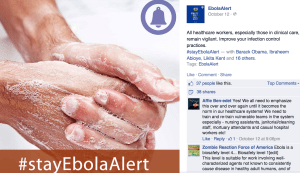 The work of this passionate dentist in social media may have saved lives in Nigeria, and serves as an inspiration about how HCPs can make a noticeable difference using the technology at their disposal. And although other countries in Africa may not be as well equipped, regions where there have been new cases, such as North America and Europe, should take note and learn from the engagement efforts of HCPs such as Dr. Bakare. Activism can take on many different forms, and as the world becomes more connected through social media, more HCPs may see the opportunity to improve global health without needing to be on the front lines.