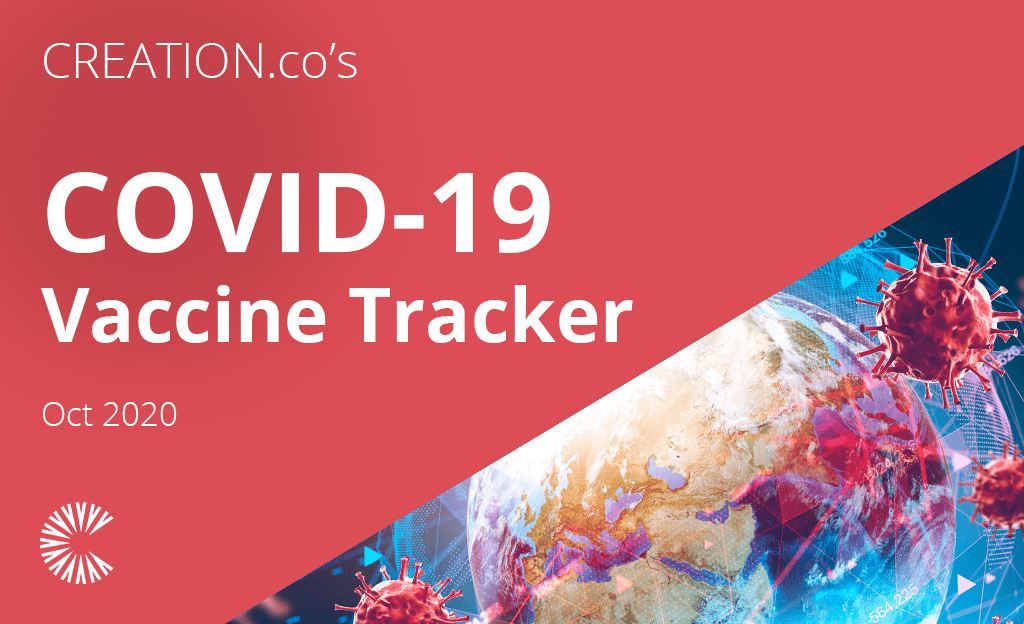 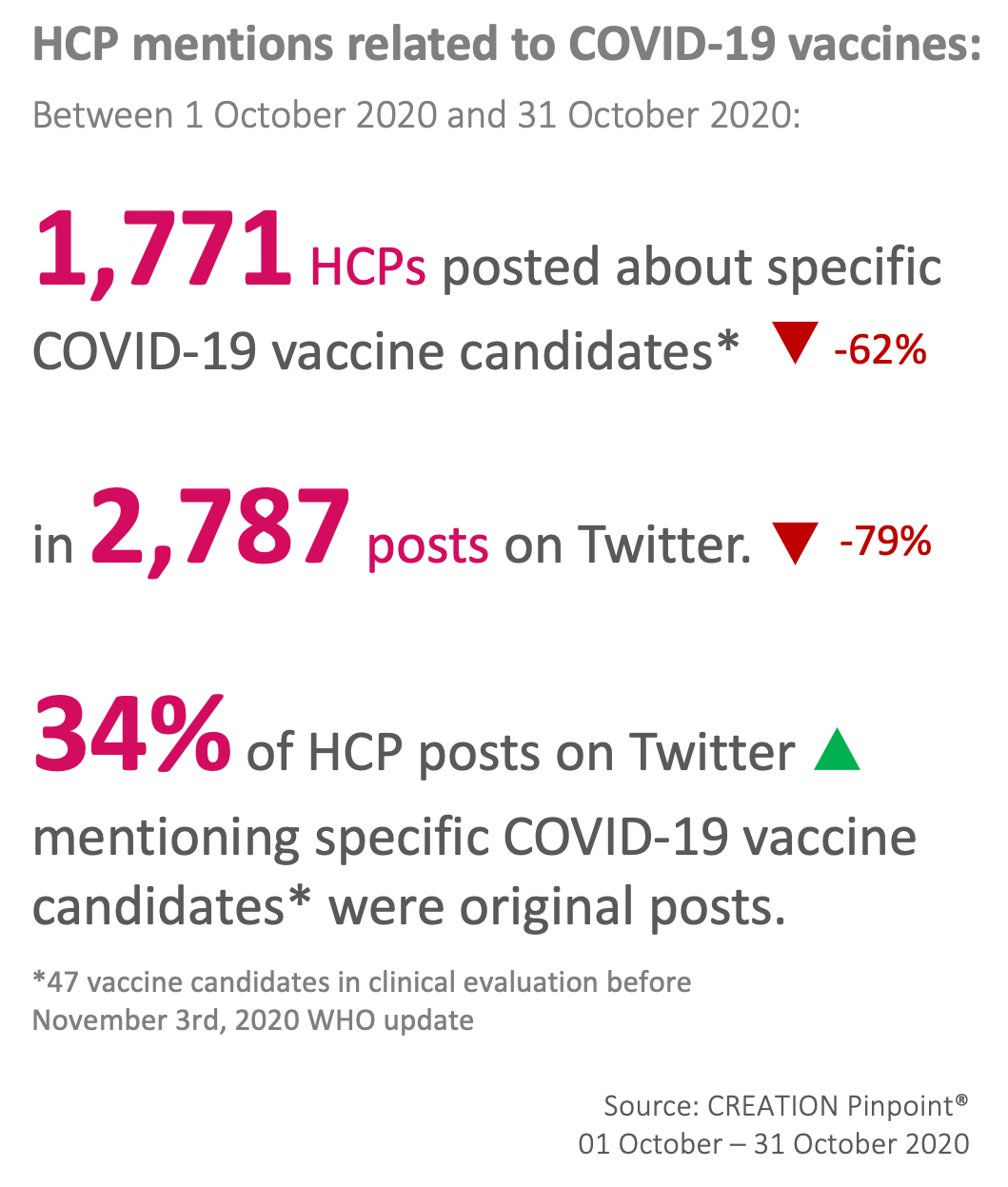 October has seen a significant decrease in volume of online healthcare professional (HCP) conversation around COVID-19 vaccine candidates. Despite this decrease, a higher proportion of the online Twitter conversation was made up of original posts. This could be related to the nature of vaccine-related news over October- while over September most vaccine candidate conversation was overshadowed by AstraZeneca’s decision to pause clinical trials. This month there were several updates from multiple manufacturers, possibly prompting more original discussion between HCPs, rather than authors simply sharing links to news websites, or repeating headlines. 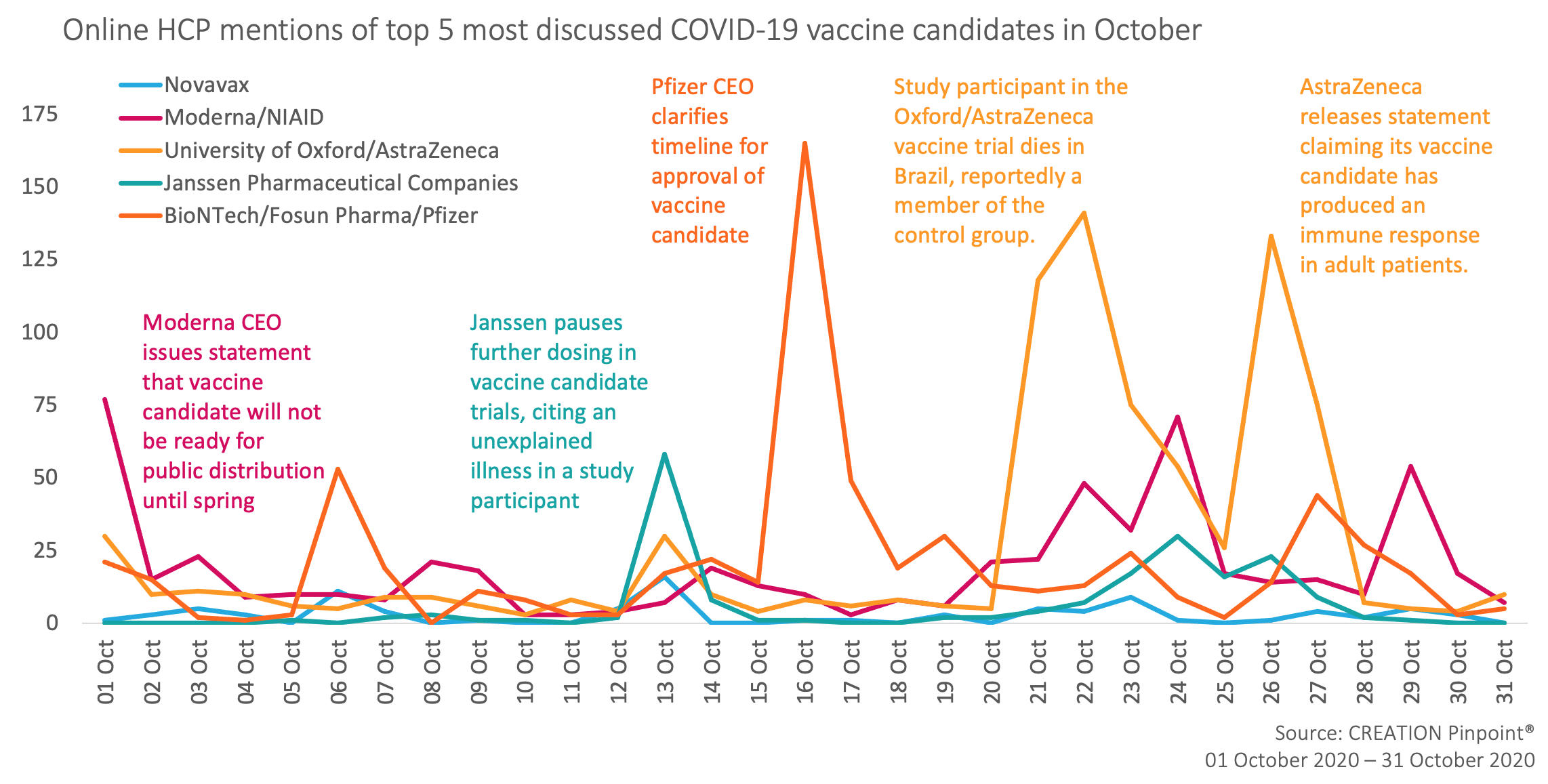 That said, the update that attracted the most attention was from a press release issued by Pfizer’s CEO, Albert Bourla, which stated that the company would not be seeking authorisation for a vaccine candidate before mid-November at the earliest.

Moderna began the month with similar news, that distribution of a vaccine would not be possible until Spring 2021 at least. Janssen and AstraZeneca attracted discussion with updates on how their clinical trials are going; both have experienced setbacks due to unexpected reactions in study participants, although AstraZeneca has also released statements more recently claiming that an immune response has been established in adult patient populations.

In this way, HCP conversation this month has been characterised by news of vaccine candidate progress, both in clinical trials and approval status.

HCPs welcome crucial clarification from Pfizer ahead of US election.

News of Pfizer not seeking emergency authorisation for their vaccine candidate prompted a lot of discussion from HCPs, not least from HCPs based in the US (who made up 51% of this month’s Twitter dataset). In part this has been prompted by the US election, and pledges from Donald Trump that a vaccine will be ready before election day, with many acknowledging this as they shared the news.

Many HCPs seemed unsurprised by the announcement, although some noted that this was the first time such a specific timeline had been given for a vaccine by a major pharmaceutical company. In addition to sharing the news, some HCPs expressed relief that Pfizer does not appear to be ‘rushing’ the production of their vaccine. Others commended Pfizer saying that ‘science, not politics’ should drive vaccine development.

However, while many HCPs with a prominent share of voice received the news positively, Pfizer has also drawn criticism from some outspoken HCPs since beginning clinical trials in adolescent patient populations.

Discussion of AstraZeneca and the University of Oxford’s collaboration led the conversation again this month, mainly constituted by two items. Firstly, news of the death of one study participant in Brazil. Some used the opportunity to emphasise that many obstacles still lie in the way of successful vaccine production. Whereas others extended their commiserations, noting that due to this participant being a member of the placebo group, the trial would be able to continue without delay.

Secondly, AstraZeneca released a press release claiming that its vaccine has established an immune response in older and younger adult populations. This news has been welcomed by HCPs, with many sharing it, though some expressed dissatisfaction that the data has not been published for review yet.

With more and more news of COVID-19 vaccine candidate progress trickling in, HCP responses to increased transparency from pharmaceutical companies has led to more HCPs expressing their trust in pharma. HCPs use their social media platforms to keep their public and peer audience up to date with trusted information, often with the aim of seeking to bring clarity. Therefore recent attempts from pharma to provide detailed timelines and clarification may provide more opportunities for common ground and meaningful relationships to be established between vaccine developers and HCPs.

We will be tracking the online HCP conversation to identify trends and change in views relating to COVID-19 vaccines. You can stay up to date with HCP insights by subscribing to CREATION Knowledge e-journal. 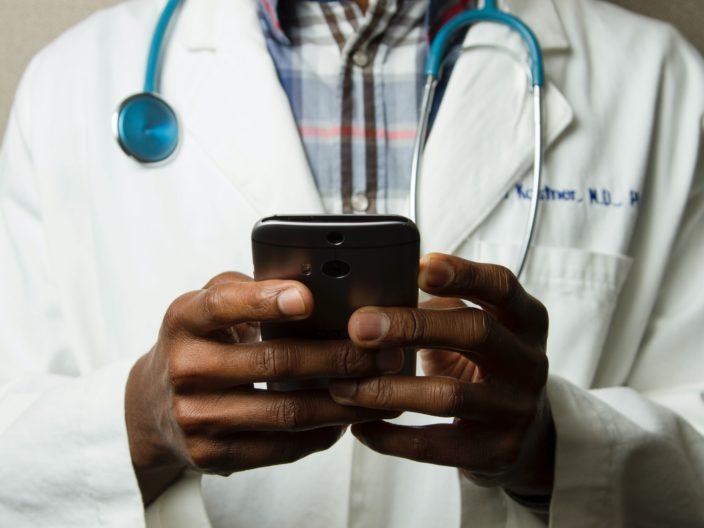 Where are your HCPs? 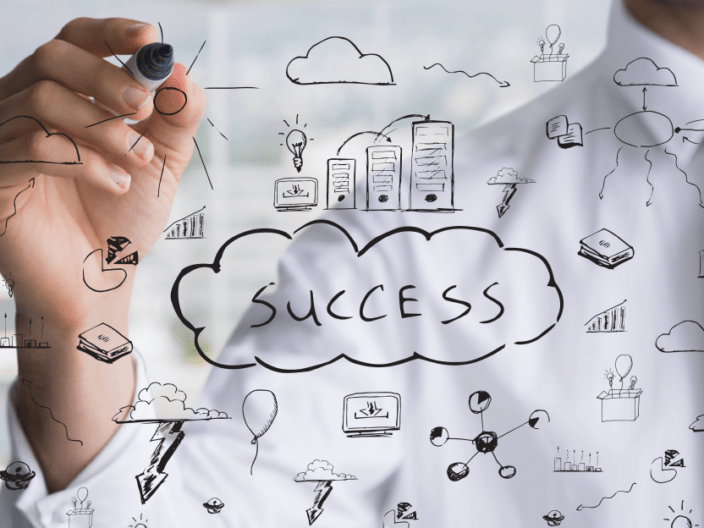 HCP customer insight: How to make it work for you