Healthcare Professionals in the Digital Era

I have already mentioned the breadth of social networks for healthcare professionals, which range from country-specific, validated closed networks to international and more open networks. While some are restricted to registered doctors, others are open to a wider range of healthcare stakeholders.

Among the more open and international doctors’ networks is doc2doc, hosted by the UK’s BMJ Group, which includes doctors’ forums, blogs and social networking features including the opportunity for doctors to create a personal profile page, ‘friend’ and recommend others, and comment on each other’s posts. The network includes a public area which may be accessed by anybody, and a closed area intended for clinical discussions and restricted only to medical professionals.

Even in doc2doc’s open forums, healthcare professionals discuss the treatment of patients and medicines. A recent extensive discussion between users of the social network starts with a specialist from Ninewells Hospital in Dundee asking fellow members for help solving a particular patient case. “This weekend I found a very interesting patient, with an interesting constellation of symptoms, signs, and results”, he posts. “…I think I have at least one diagnosis, but I can’t explain everything. I thought I might tap into the collaborative knowledge of D2D [doc2doc] to try to get more answers… And it’s a fun game”, he observes, before describing symptoms and starting a discussion which includes questions and answers from doc2doc’s international network of doctors.

Another recent example of content discussed between healthcare professionals on doc2doc is a post by one user about the FDA approval of Astellas’ drug Mirabegron, discussing the drug’s treatment of overactive bladder, its clinical trials and side effects. This post is followed by extensive discussion between healthcare professionals about the use and safety of the drug.

The visibility of content inside healthcare professionals’ networks varies greatly, from networks such as doc2doc, or DocCheck, which include some public areas of content, to completely closed networks such as doctors.net.uk where all discussion takes place behind securely authenticated areas. Many of these networks also offer tools for researching the behaviour of their users and for engaging healthcare professionals directly.

A vast and ever-growing range of digital tools for healthcare professionals has developed in recent years, from tools accessed via a web browser to mobile apps installed on smartphones.

Examples of these include diagnosis tools, such Nycomed-sponsored Doctot Chest, a suite of clinician-administered assessment scales and lookup tables related to COPD patients. Doctot Chest is one of a range of pharma-sponsored apps for iPhone developed by Doctot which include tools to evaluate Stroke patients, sponsored by Boehringer Ingelheim, and to diagnose Dementia, supported by Lundbeck.

Other dedicated tools for healthcare professionals supported by pharmaceutical companies include specialist resources focused on a particular area such as Astellas’ Transplant360, which includes clinical tools designed to help healthcare professionals to support patients after transplantation, as well as resources supporting congresses and events.

Traditional journals read by healthcare professionals are also behind new digital tools. The Oncologist, the journal of the Society for Translational Oncology, which also operates an online community, provides its journal as a rich app for iPad, iPhone, Android, and Kindle Fire devices.

Whilst the mobile app version of The Oncologist includes all the content of the print edition, making it available wherever and whenever a healthcare professional wishes to read it, its real power lies in the inclusion of rich media content such as video. Full length lectures from specialists are among the resources available to view and hear via The Oncologist app. 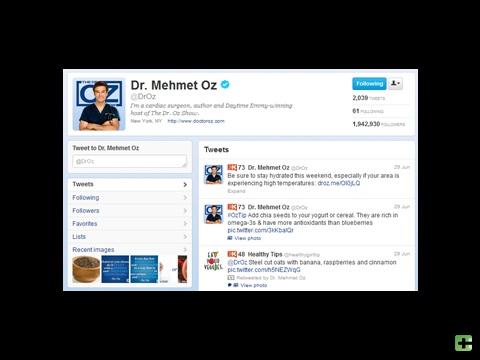 US TV doctor Dr Oz has almost 2 million Twitter followers, but little digital engagement with them.

We have already considered the role of mainstream digital channels such as Google or Facebook as health information portals, and of course it is no surprise to discover that healthcare professionals’ use of digital channels is not restricted to dedicated platforms for doctors. We know that doctors use Wikipedia, Google, and social media channels in both professional and personal contexts.

Take the example of Dr Mehmet Oz, US-based cardiac surgeon with an award-winning television show about health. Dr Oz has a large following on social media, with almost two million Twitter followers. Yet this particular channel appears to be little more than a broadcast medium, with little two-way engagement and virtually no following of other users.

More interesting from a healthcare engagement perspective is Kevin Pho, MD, whose public Twitter profile includes almost 55,000 followers and is far more engaging. Kevin Pho’s digital engagement includes an active blog where he discusses health, drugs and the role of digital channels in healthcare. The blog is actively shared by other Internet users and has almost 87,000 subscribers to its RSS feed (a tool for reading blog updates) and 40,000 subscribers to a weekly email update, while Kevin Pho’s Facebook page is ‘liked’ by around 14,000 people.

And it is not only in the US that healthcare professionals are using mainstream digital channels to engage others. As we will see next in Defining Digital Opinion Leaders, doctors in Europe are also engaging with each other using public social media platforms.

This article is included in my eBook, Activating Digital Opinion Leaders, available to download free of charge.