Can You Feel My Pain; Pfizer with European Patient Groups

“I have had Chronic pain for the last 8 years it affects me every day of my life and I feel useless as I can’t even sit in a chair for a period of time or even play with our children”, reads just one of over 1,100 moving personal testimonies shared openly by people living with chronic pain, as part of ‘Can You Feel My Pain’, an initiative by Pfizer in partnership with nine pain patient advocacy groups across Europe. Reading some of the comments made by Internet users who have engaged in the campaign using social media channels including Flickr and Care2, an online  petition tool, it is clear that many people living with chronic pain feel neglected or misunderstood.

“We know that patients aren’t getting access to the right diagnosis and management of their pain, and there’s a lot of frustration about not being able to voice their thoughts and opinions”, says Louise Clark, Associate Director, Communications EU & UK at Pfizer. “So ‘Can You Feel My Pain’ was set up as an engagement tool across the whole of Europe, to galvanise support, mobilise the voice of patients across the region, online, in a way that was accessible to everybody in the right language.”

Indeed, the initiative includes social media interfaces in six European languages, overcoming the language barrier that has often been a challenge in international healthcare engagement strategies. This has had a significant impact on the level of engagement, with over 75% of outcomes such as online petition signatures coming from engagement in languages other than English.

The initiative was designed to give a collective voice to people living with chronic pain that could be used in support of a wider initiative to communicate the plight of pain patients to European policy-makers and drive change in attitude.

Pfizer’s strategy was to create a groundswell of public voice about living with chronic pain, allowing patients and carers to express themselves via whatever channel and in whatever language they felt most comfortable – from email to social media; using text or images.

The results have been powerful: so far, over 1,100 people have shared their experiences of living with, or caring for a patient with, chronic pain. Over 1,700 people have signed a petition in support of a ‘bill of rights’ to help improve the life of people affected by chronic pain. And this is just the start – in the last month alone, the number of petition signatures grew by 400.

Ruth Wilson, Pfizer’s Team Leader, Patient Relationship Management, says that the strategy has created a long-lasting legacy of action and partnership. “‘Can You Feel My Pain’ has started to show a new vision of how patient advocacy groups in chronic pain can start working together. It’s a new way of working”, she says. 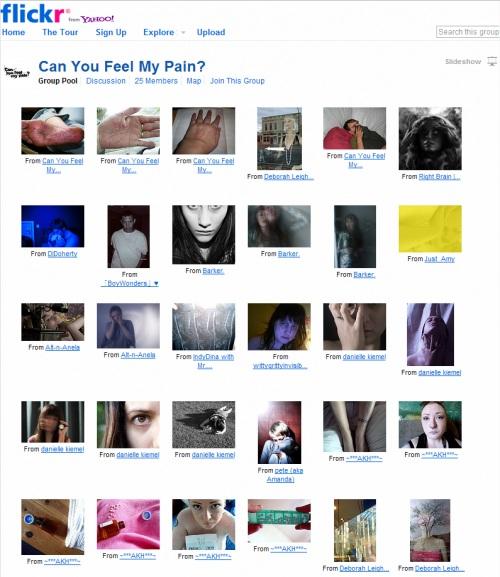 In Can You Feel My Pain’s Flickr group, Internet users can express
chronic pain through images that transcend language barriers

Wilson says that the idea for ‘Can You Feel My Pain’ first emerged in 2009, when Pfizer brought together European patient groups working in the area of chronic pain to create an advisory board working in partnership with each other, with common goals.

“We undertook a consultation process to enable patient groups to understand the impact of working in partnership not only with Pfizer but also each other. We asked them ‘what would you like to do?’ and what came from that was to raise awareness, empower people to do something about their chronic pain, and enable people to say that it was not right to have to live with chronic pain.”

When it came to planning the social media component of the initiative, Pfizer researched the behaviour of Internet users around chronic pain in Europe to inform their strategy.

“We carried out some research to look at who was talking about what, in which places; and those greatest places of engagement opportunity were our initial target to ensure that the uptake of the campaign was good …so we’re reaching out to people in the right way and in the right language and in the right environment”, says Clark.

In a break from convention, Pfizer’s digital engagement strategy for ‘Can You Feel My Pain’ was not designed to attract users to a campaign website, but rather to engage them right where they were. Internet users on a patient advocacy group website, for example, can participate in the social media components directly from there. Or those using social media environments including Facebook, Twitter or Flickr, can engage using these platforms. Online petitions, in six languages, are hosted on social cause site Care2, encouraging people to sign and share their experiences in their own language.

Can You Feel My Pain is one of the most groundbreaking examples we know of to date led by a pharmaceutical company engaging on a healthcare issue through social media. The initiative represents many firsts: using photo-sharing platform Flickr as a powerful cross-language visual communication tool; encouraging patients to openly share their experiences in multiple-language environment; and connecting together an international network of patient organisations around a common cause, empowering them to engage effectively using social media. “In Pfizer, we’d never done anything quite like it”, says Wilson.

Operating in a highly regulated environment, across a region that includes multiple international regulators, required a huge amount of work for Pfizer’s cross-functional team which Wilson says included around 150 European colleagues. “They all needed to work within their local regulatory environment to enable sign-off; our medical and legal team were fantastic and developed processes and policies which Pfizer felt comfortable with and have been shared as best-practice.”

Clark says that the patient advocacy group partners played an important role in shaping the strategy. “We learned a lot from talking with the patient groups and understanding how we could shape the campaign, but also about the capacity that these groups have to be able to deliver in that space”, she says, adding that Pfizer provided practical support by equipping patient groups to play a more active role in social media, and by teaching them new skills that enabled them to go well beyond supporting the ‘Can You Feel My Pain’ initiative.

“We were able to work with our partners in an honest and transparent way, helping them to deliver beyond this campaign, online. We helped them to understand what the opportunities were and then they went ahead and did it. Now these organizations are tweeting, they’re undertaking their own social media activities. That to me is real engagement, and real value in a relationship.”

Charlotte Binstead, Communications Manager with Pfizer, says that the patient advocacy group partners are at the heart of the campaign’s future:

“Without the partners, there is no campaign. That’s the point of not having a central website: they are the ones driving the campaign. We’re doing bits to help and promote, but as engagement increases, more and more it will be based on the interactions of the membership organizations.”

The Pfizer team members say that they have learned a lot through the development of ‘Can You Feel My Pain’, and the lessons they have learned have been shared internally to continually improve Pfizer’s engagement.

Amongst the lessons shared is the power of engaging partners and colleagues as early as possible. As Clark says, “You have to be open-minded; you have to engage with partners early and ensure that they share the same belief in the direction that you want to go and that they’re fully engaged and active through the planning process, and that their expectations are met.”

For communicators in a pharmaceutical company, working effectively with medical and legal colleagues is essential. Binstead confirms just how important it is to envision and educate colleagues in a changing environment: “Don’t assume that everybody – whether a partner or people within your own organization – understands or knows what these platforms for engagement are, and how they work or how they will work within the campaign. You need to spend some time up-front, early on, educating people. Because generally, if people don’t understand what something is then it’s easier to say ‘no’. You have to empower them, make them passionate about it which is what we’ve done with our internal people but also with the patient groups – make them really want to be part of it. Social media is a moving target; and we’ve learned along the way.”

Finally, whereas a traditional media campaign might gain rapid exposure, the organic social media approach taken with ‘Can You Feel My Pain’ requires more patience but leaves a legacy. “These kinds of online campaigns are slow-moving, and build up. It’s not something where you can just go onto Google and generate lots of great hits. It’s something that takes time and a lot of skill to get moving, but once it does, it moves very quickly”, says Binstead. “When it starts slowly, and builds momentum, don’t rule it out yet. Be patient.”

For a groundbreaking initiative that unites patients across Europe and gives them a voice, we are proud to award Can You Feel My Pain the Healthcare Engagement Strategy 2011 Patient Empowerment Award.

Contact CREATION.co to discuss your views and find out how their insights into healthcare engagement can help you achieve better health outcomes.