How does Lucentis/Avastin debate affect Roche’s reputation among doctors?

Studies that confirmed Avastin’s equivalence to Lucentis in treating age-related macular degeneration have been in the public eye since 2012. Recently however, there has been a resurgence in news around the topic, with organisations such as WHO and the British Medical Journal contributing to the conversation.

Avastin and Lucentis are both medications manufactured by Roche, but in Europe only the latter is licensed to treat age-related macular degeneration (or AMD for short). The condition is currently the leading cause of blindness in developed countries.

In an interview to BBC’s Mark Porter, James Cave of the Drug & Therapeutics Bulletin stated that while Lucentis has the ability to prevent the disease from progressing, it is currently priced at around £1,000 per injection, while Avastin (a Roche drug licenced to treat breast cancer) costs around £60.

It is easy to see why given the current financial state of the NHS, the importance given to price effectiveness is key, however doctors who wish to prescribe Avastin for AMD would have to do so ‘off-label’, that is, using the drug for an unapproved indication.

After a series of rows and public discussions around the topic, the BMJ called for the NHS to be able to prescribe Avastin instead of Lucentis; however Roche has stated that this compromises safety in patients and cannot be endorsed by them as a company.

What do healthcare professionals in Europe have to say on the matter?

In order to understand the impact of this matter on the views of healthcare professionals (HCPs) in Europe about the products and Roche itself, we conducted a study of HCP online conversation using Creation Pinpoint. The study covers HCP conversation in social media between 1 Jan 2014 and 15 June 2015 in 5 major European languages (French, English, Spanish, Italian, German).

When looking at the data at a very high level, we found that over half of mentions among HCPs in the UK discussing age-related macular degeneration were about the Avastin/Lucentis story. Of these, 6% referred specifically to the manufacturer, suggesting that the story has developed into a corporate reputation issue for Roche. 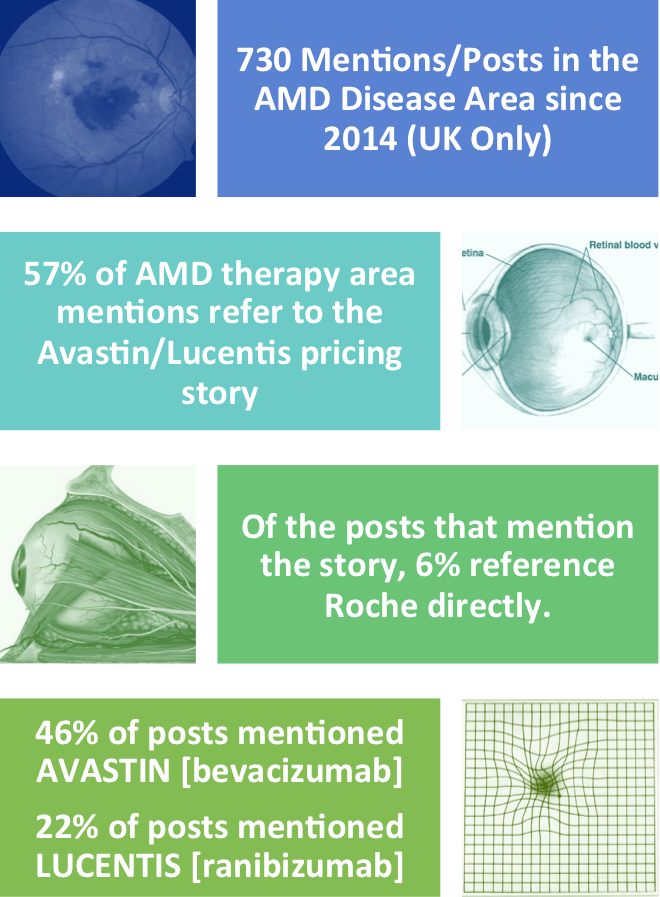 The study found that the levels of exposure and traction the story got across Western Europe varied greatly from market to market, with the UK and Spain being the two countries with the most interest among HCPs online. While HCPs in Germany discussed macular degeneration, there was little coverage of the Avastin/Lucentis case itself. The chart below shows the biggest stories in each country, as well as how many of the total AMD posts compared the 2 drugs directly, and other areas of focus. 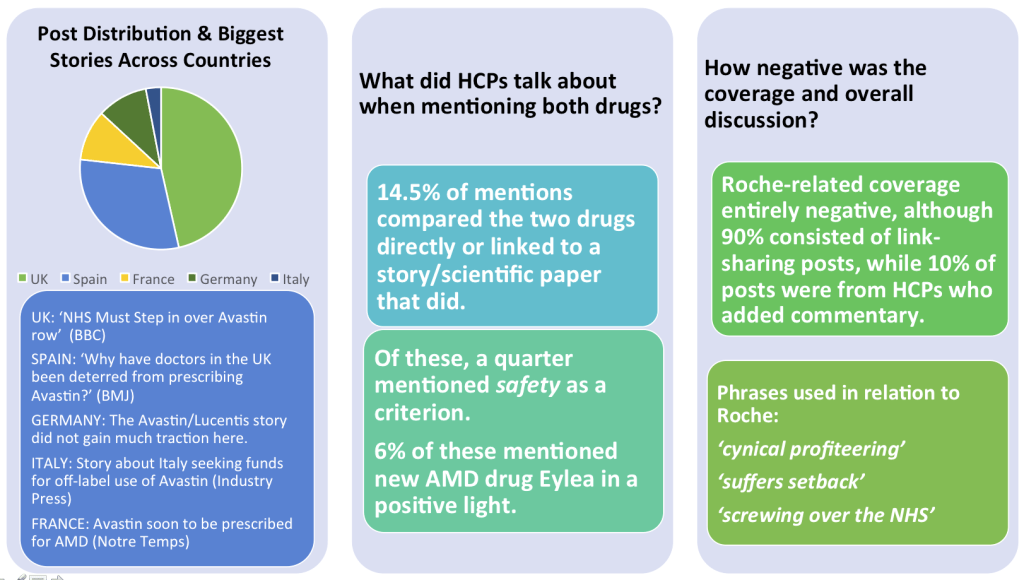 Evidence of the impact of the story on Roche’s corporate reputation is seen in a tweet sent by Dr. Michael Ingram, a GP who runs educational courses for other doctors across the country, in which he accuses Roche of “screwing the NHS”.

Is this the same Novartis that is screwing the #NHS over Lucentis with their Basel colleagues Roche ? https://t.co/BELG9QXEqC 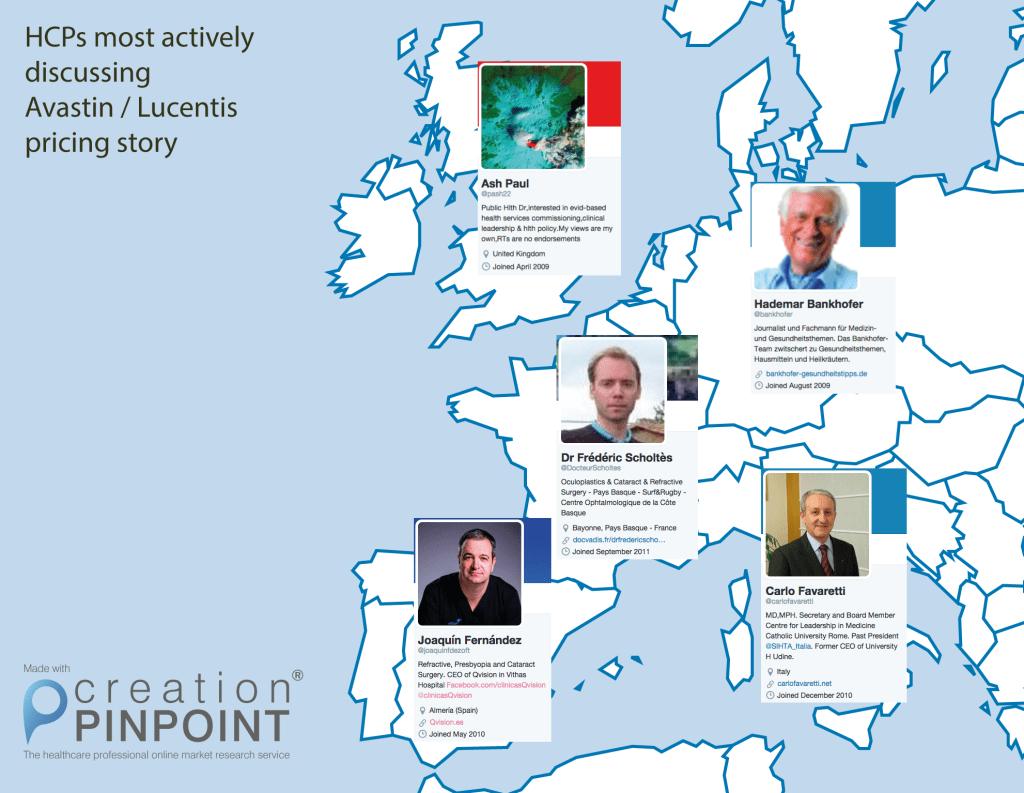 Most active HCPs in each country (click to enlarge)

Another popular link within the UK was lawyer David Lock’s legal essay on the story, published via BMJ and shared via Twitter. The tweet has been shared 5 times, by health charity representatives, optometrists and other healthcare professionals.

I did the legal view on Avastin/Lucentis for BMJ for those interested: http://t.co/H2lObMt1qx An issue that may run and run!

While a number of health organizations have offered their views on the issue, the organization HCPs in Western Europe engaged most with online was by far the BMJ, followed by the Cochrane review, and the World Health Organization.

Could European health systems use the saved money to re-invest in underfunded services?

While the story continues to develop in the media as support for Avastin in AMD is endorsed by organisations such as the Macular Society, presently unlicensed drug use is not endorsed by the NHS and/or the UK government.

As public health director Ash Paul puts in, ‘…surely Avastin/Lucentis funding issue is one of the biggest NHS opportunity costs?’

Meanwhile, in Italy, a large fine has already been imposed on Roche and Novartis due to ‘questionable marketing’. It seems however, that the story did not gain online traction among UK HCPs, with digital links between HCPs in the UK and Spain being much stronger than those between UK and Italy.

France is also choosing to treat AMD sufferers with Avastin in order to pay a more economical price, naming it an acceptable substitute for Lucentis almost a year ago. Thus, with the issue partially resolved in these countries, could this be the reason why there is less conversation about the issue among French and Italian HCPs?

Making sense of drug prices is a sensitive issue and can be controversial in various countries, but when faced with resources they feel they can trust to highlight important issues, digitally active doctors will be vocal in addressing their concerns, especially if these are unresolved.