Is Medium The Message For Healthcare Professionals? 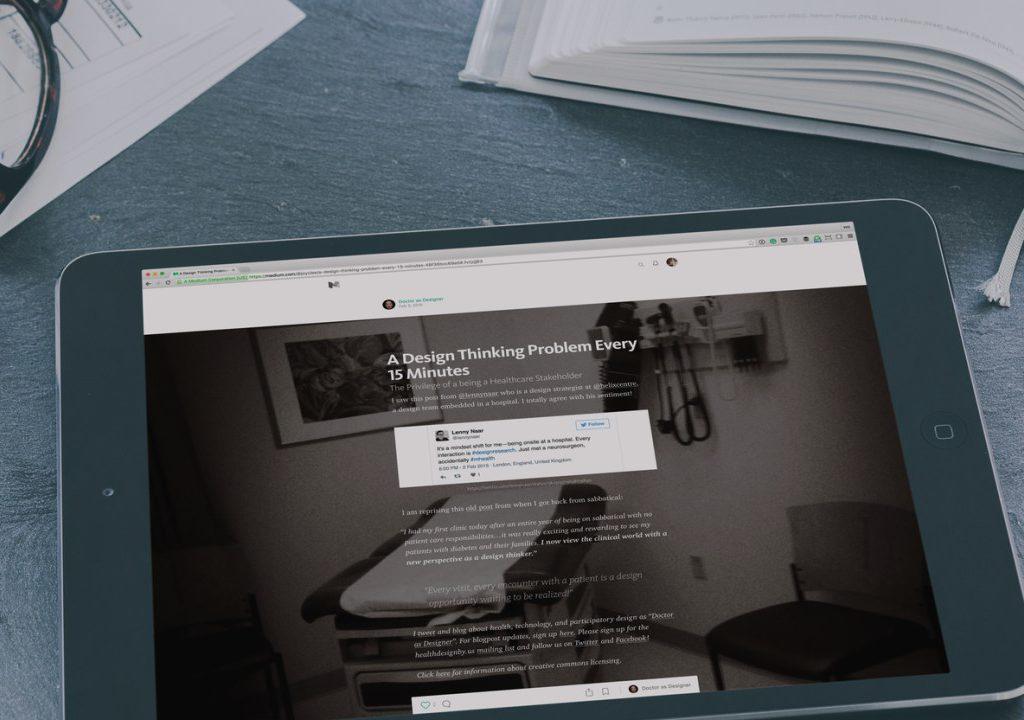 The phrase ‘the medium is the message’ was coined by Marshall McLuhan in the mid-sixties to reflect the impact new platforms and distribution methods would have on how a message is received by its audience.

Skip forward to modern day and this statement is more relevant than ever. There seems to be a new tool for communication appearing on a weekly basis, be it a closed messaging app or broad social sharing tool – there is always a new medium for us to connect with the world.

We spend much of our time scoping these platforms, to identify what will be of interest to the healthcare industry, and more specifically, which of these new channels will be adopted by doctors, nurses, pharmacists and specialists.

From our research, Twitter still holds the leading share of voice when it comes to communication practices of healthcare professionals (HCPs), but a potential challenger to that crown comes from relative newcomer Medium. Medium was created by Twitter co-founder Evan Williams in 2012, with a vision of offering the same broad accessibility of information that Twitter provided, but with much longer-form, in-depth content.

The site attracts roughly 30 million monthly visitors, and our early research showed a significant number of HCPs on the platform, with some writing, some engaging and others simply listening to the conversation.

So, is Medium the next medium of choice for HCPs? Let’s take a look at some of the content being posted and who is posting it.

Joyce Lee MD (@joyclee), Professor and Endocrinologist is clearly a pioneer of new technologies and uses Medium to encourage conversation around how technology is bringing cultural changes to the health industry.

Her most recent post discusses the impact of patient-led innovation in treatment and diabetes monitoring through the NightScout Project – a community-led platform for patient hardware innovation. 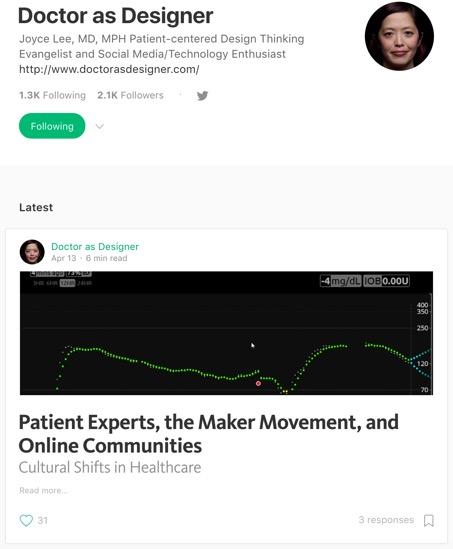 Some have taken to Medium to share in-depth experiences of becoming political campaigners in the face of cuts to healthcare budgets, both in Europe and the US and Canada.

Nadia Alam (@DocSchmadia), a GP Anaesthetist in Ontario has posted numerous times on the impact of politics on health and patient care, with her most recent post ‘On Becoming an Activist’ discussing her experience as a healthcare professional turned activist. 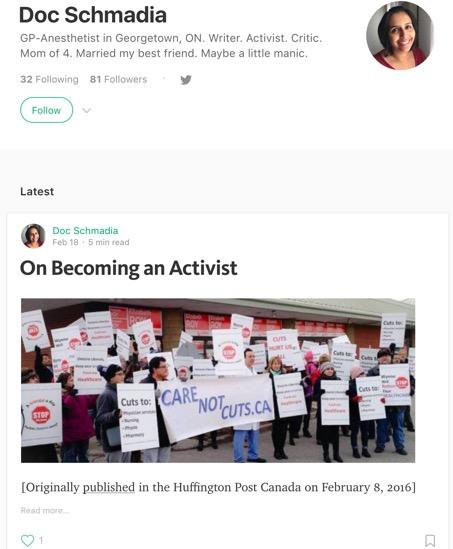 Healthcare systems the world over are in a state of flux, with sometimes radical reforms being suggested. Many have taken to Medium to share their thoughts on these policy issues.

One physician in particular who has been vocal on the topic of a ’single-payer’ system in the US is Pat Salber MD (@Docweighsin), an emergency physician and founder of ‘The Doctor Weighs In’ blog. Pat has used Medium to spark conversation around this and many other topics on policy and governance in healthcare. 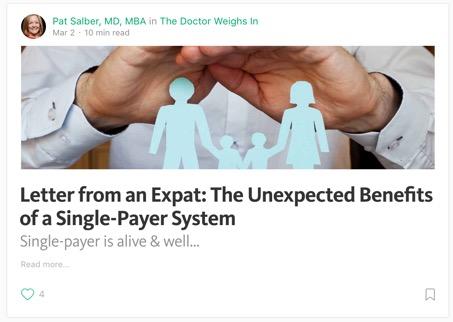 One area where Medium really shines is when you need to share something personal – an in-depth explanation for something where you need to tell a story.

An example of this is US Family Physician Ian Kroes MD (@iankroes), who recently took to Medium to tell the story of how he became a Doctor and the inspirational role his father played in that decision, all in the context of an announcement that he is setting up a new practice.

While he could have set up a blog, Medium gives an instant audience and the ability to easily share and engage in conversation with others. 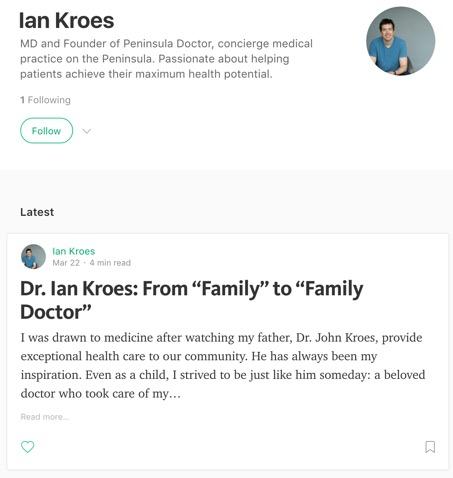 Healthcare Professionals are by their very nature, highly knowledgeable people. Sharing that knowledge to help others forms a core element of how doctors, nurses and other HCPs engage online.

The predominant content from HCPs on Medium that we encountered was that of advice around specialist topics, usually a disease or therapy area.

These articles range from health tips, as with this post from Paul McDonough MD (@DrPaulMcDonoughMD), orthopaedic surgeon, on looking after your back, to deep analysis of focused topics such as this post “5 Reasons To Consider 3D Mammography For Your Annual Screening Mammogram” by Danielle Carroll MD (@dcarrollmd), a radiologist based in Arizona. 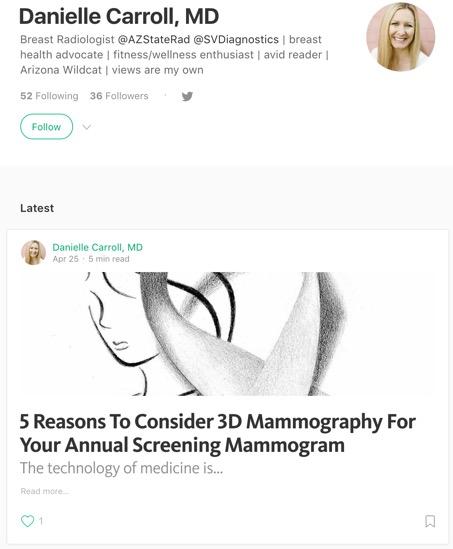 While there is still a long way to go before Medium becomes the platform of choice for HCPs, there are several early indicators that it could head that way.

There are thousands of medical professionals on the platform, however, many are still yet to write – choosing to use Medium as a listening and research tool, while others have written multiple articles that have seen good engagement and interaction.

So, is Medium the message for HCPs? Not yet, but watch this space!