The first drug to be approved under the FDA’s Breakthrough Therapy designation on the 1st of November 2013, Roche drug Gazyva has been making industry press headlines over the past few weeks. Gazyva, previously known as GA101, has just been approved for the treatment of patients suffering from chronic lymphocytic leukaemia (CLL) who have previously not received treatment for the condition. The FDA Breakthrough Therapy designation aims to facilitate the process of bringing the drug to the market, as trial data shown by Roche in July 2013 demonstrated substantial benefits over its previous ‘blockbuster’ cancer drug, Rituxan. Although still awaiting approval in Europe and other markets, the drug is expected to be available in the US within two weeks, having proven to be more potent than its predecessor.

The FDA approval is good news for Roche, which has a few other products in its haematology pipeline, especially considering that Rituxan’s European patent is set to expire before 2014.

We used Creation Pinpoint to take a look at where in the world doctors are sharing news about Gazyva, what kinds of healthcare professionals they are, and what topics doctors have been discussing online in relation to leukaemia.

Looking at the topic cloud below, we can see that within the community of HCPs discussing leukaemia-related topics on Twitter, two main stories emerge in recent weeks: Gazyva’s FDA approval and the suspension of ARIAD Pharmaceuticals blood cancer drug Iclusig. 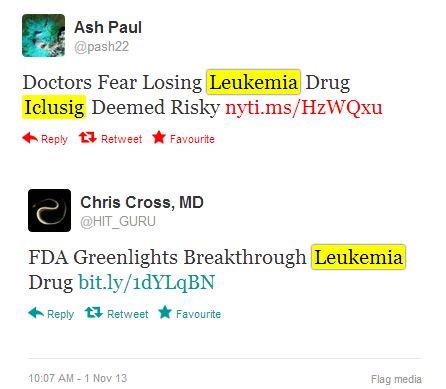 Figure 2: An example of two UK HCPs sharing news storieson Twitter, one about Iclusig and one about Gazyva.

When they are not sharing links to news stories, HCPs will often help disseminate medical education resources by ‘favouriting’, re-tweeting, and contributing to clinical and/or medical topics. As seen below, this @RheumatologyUK tweet has been re-tweeted 7 times, and ‘favourited’ 4 times. The tweet was sent during an annual rheumatology conference and talks about different diagnostic scenarios, one of which is leukaemia. 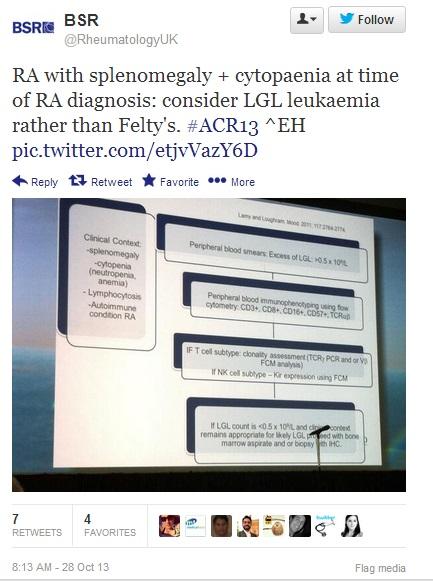 Where are HCPs sharing leukaemia stories and articles?

Within US HCP conversations, it is also interesting to note the use of hashtags for diseases and/or drugs. Below are three examples of US-based HCPs talking about Gazyva using different hashtags to place their tweet into specific conversations or interest groups.

Figure 4: HCPs use hashtags to emphasise different sub-topics within their tweets.

Although for the time being the majority of Gazyva-related tweets are informational and used for the purpose of sharing breakthrough news stories, it will be interesting to follow their evolution as more and more HCP opinions are being voiced. Typically we would expect to see HCPs start to talk about use of the drug and share any questions or concerns that they have via social media as a drug becomes available in markets.