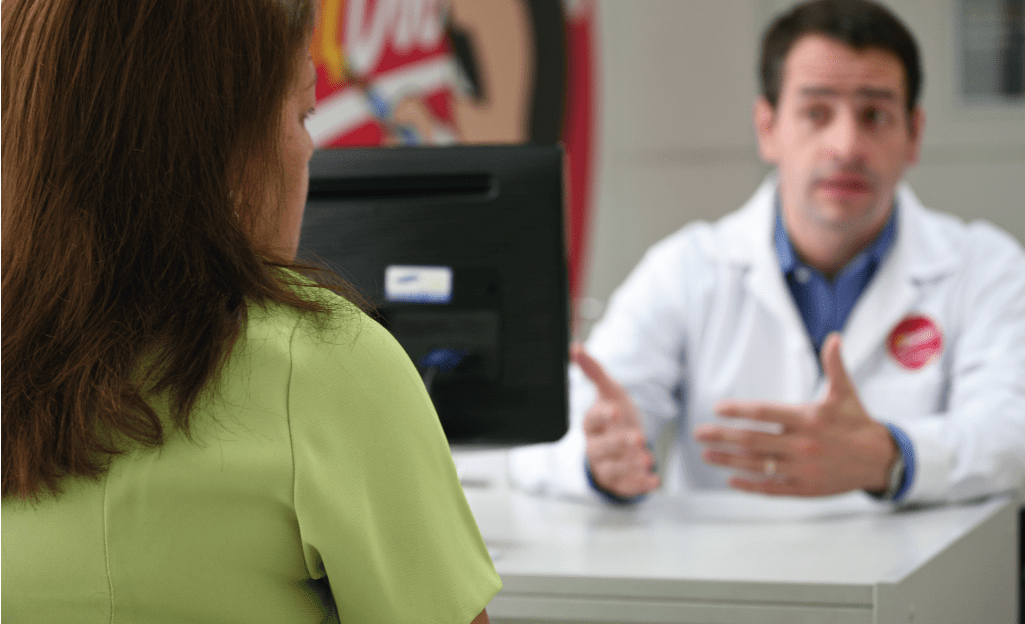 Type 1 Diabetes is a disease in which the body does not produce insulin and therefore must be manually injected by the patient. In the UK, it is estimated that there are more than 4 million people with diabetes, according to diabetes community Diabetes.co.uk. Type 1 Diabetes accounts for only 5-10%¹ of all cases.

While listening to healthcare professionals’ (HCPs’) online conversations in this therapy area it becomes apparent how life-changing the disease is. Advances are being made on the medical side of treatment and there are also new technologies being created to assist in the lifestyle of a person living with Type 1 Diabetes, specifically in two areas: measuring blood glucose and administration of insulin.

But what if those technologies could be combined? What if one device could measure a person’s glucose level and deliver insulin accordingly? This is the concept of the artificial pancreas and it has captured the attention of HCPs in the UK. 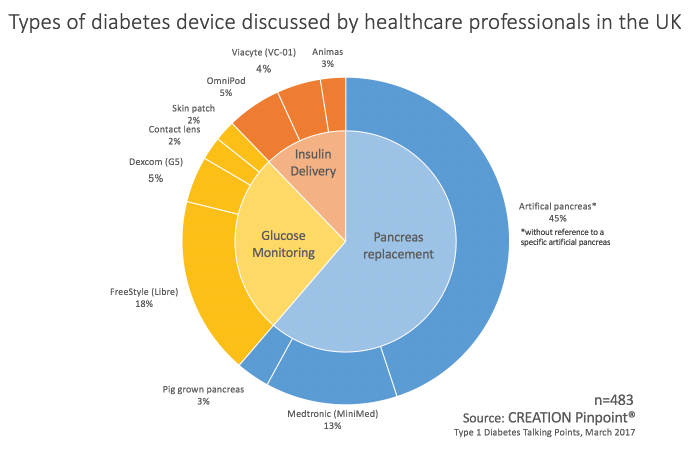 A recent CREATION Pinpoint study, ‘UK Type 1 Diabetes Talking Points’, revealed the level of HCP interest in devices for people with diabetes. The chart above shows key themes in HCP conversations about technology relating to diabetes. All devices relating to measuring glucose and delivering insulin combined made up 39% of this conversation while the majority was relating to a technological or biological method of replacing the pancreas. Medtronic’s MiniMed 670G was a key driver of conversation relating to pancreas replacement technologies.

Not only did Medtronic’s MiniMed make up 13% of the entire technology conversation, over 20% of the discussion surrounding an un-named artificial pancreas was implicitly pertaining to the MiniMed, especially its FDA approval.

It was in September 2016 that Medtronic received FDA approval for their new device which they call a “hybrid closed-loop system”. Throughout the year, HCPs had been sharing articles relating to the latest news on the device with anticipation and excitement. The news of FDA approval was shared widely in the UK. One doctor, Masood Ahmed, tweeted about the product’s earlier-than-expected release.

Many other HCPs posted and shared the news. However, just one month after it was launched some HCPs were disappointed with the result. 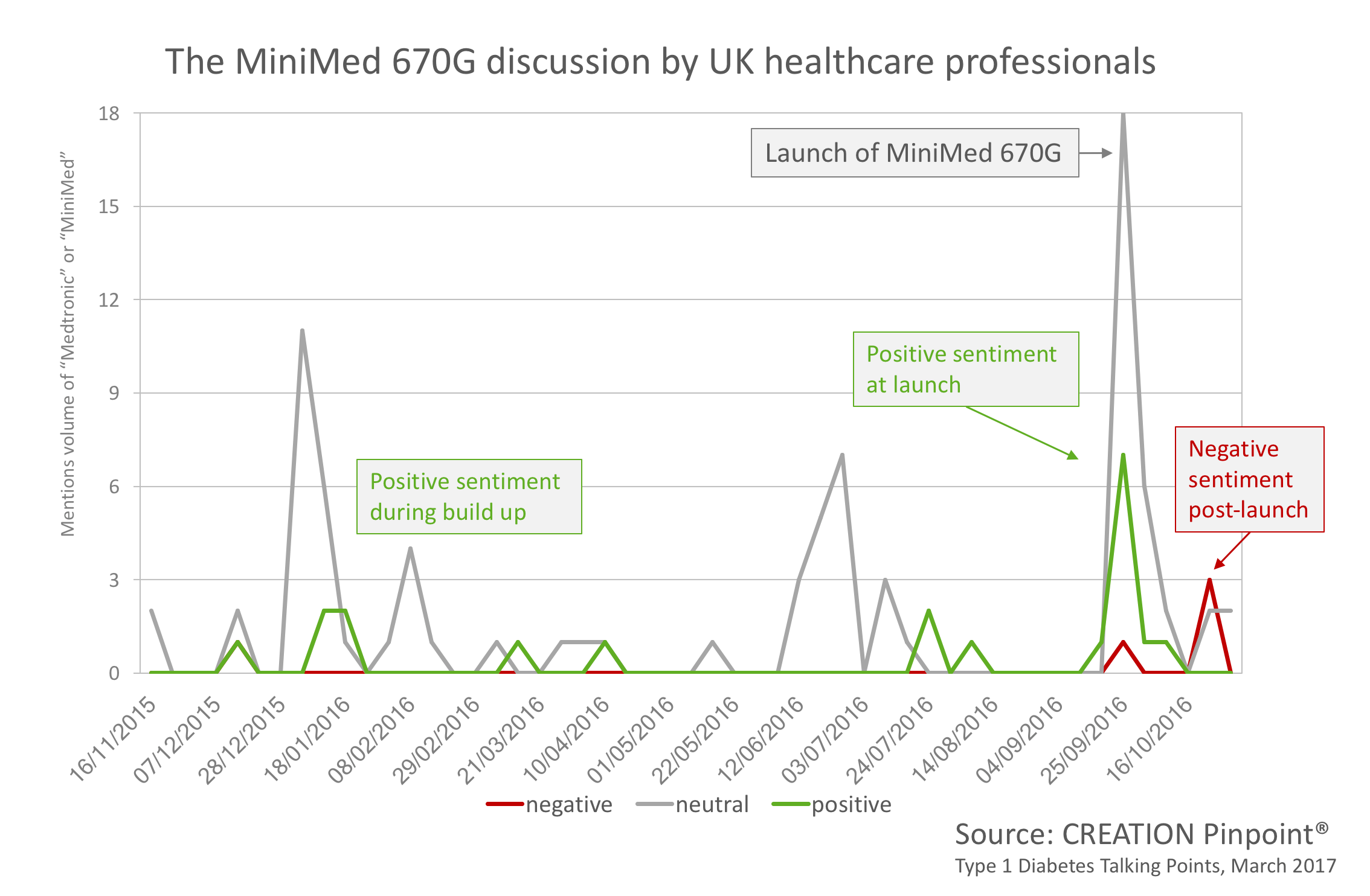 These HCPs stated the device was a let-down; one such HCP was Nazneen Rahman who tweeted that the “much-hyped ‘artificial pancreas’ leaves at least some diabetics disappointed.”

The question we are left asking ourselves is why would such a popular product pre-launch, a product that has been preceded by other successful devices from the company, be perceived as such a let-down to HCPs?

Based on the evidence it becomes clear that the use of certain terminologies has been the downfall of the post-launch discussion of MiniMed 670G. It appears that Medtronic had been clear this product was the next step towards an artificial pancreas, calling it a “hybrid closed-loop system device”. The issue seems to have arisen as other organisations such as the FDA, JDRF and members of the media have labelled the device as the first artificial pancreas.

One patient, who was reposted by an HCP, noticed the error and commented on the confusion it will create in the future when the first artificial pancreas will be approved and released.

By the time we actually DO get a proper, full Artificial Pancreas, everyone is gonna be so confused. "I thought you had this years ago…" 🤔 https://t.co/1yDesLGyDk

This piece of information being shared by high profile organisations and, in turn, healthcare professionals, has also caused some patients to be left wanting. One patient speaking to a reporter said “I think it’s misleading: the idea of an artificial pancreas suggests… a fully autonomous device that requires no intervention from the patient. In contrast, this device requires lots of thinking about how much insulin to dose after a meal”.

There are clearly differing definitions of the term artificial pancreas. Some would define it as a device that entirely replaces the function of pancreas, measuring glucose, delivering insulin and requiring no interaction from the patient. Whilst on the other hand others would label any technology that has the functionality to both measure glucose and deliver insulin as an artificial pancreas.

By the generally accepted definition, the MiniMed 670G is not an artificial pancreas and although it could be said Medtronic has not gone out of its way to correct the wrong label, there have been some responses by members of the public on the Medtronic official webpage to this effect.

For example, when Medtronic posted the news of the FDA approval on their page almost 200 comments followed discussing the release. Among these comments, Stuart Mason Dambrot, who is involved in interdisciplinary science communications, posted “…the need for ongoing manual intervention renders the “Artificial Pancreas” monitor somewhat inappropriate” to which an official Medtronic spokesperson included in her response “The MiniMed 670G system is a hybrid closed loop system… not an artificial pancreas”. 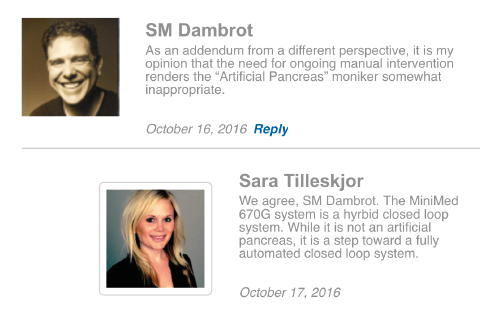 The creation of an actual artificial pancreas has been in research and development for over a decade with many different manufacturers and organisations involved in the race to get approval. Diabetes UK, for example, is funding research aimed at developing and testing an artificial pancreas and their goal is to develop a system that is worn, like an insulin pump, and monitors and adjusts insulin levels just as the pancreas does in people without diabetes.

There were many HCPs in the UK sharing information and news surrounding the development of such a system. 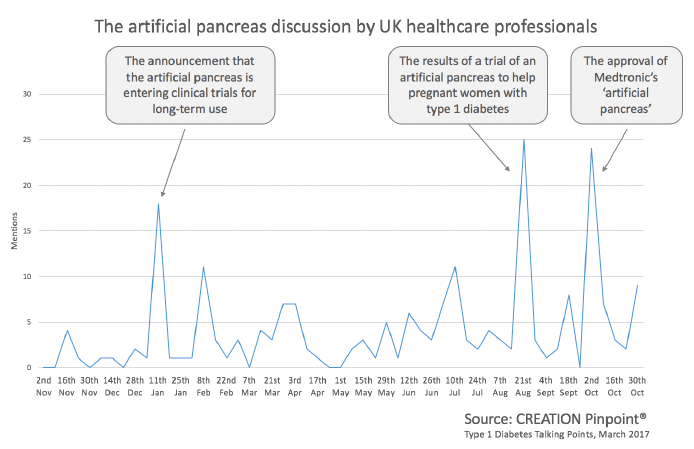 We can see by what drives the spikes in conversation what the issues are that HCPs care about in relation to the artificial pancreas: including diabetes in pregnancy, which accounts for almost 15% of the whole conversation.

By listening to the online conversations of healthcare professionals in this space we can see how valuable corporate messaging is. We can also see what captures the attention of HCPs, and why. The ‘why’ behind the artificial pancreas has evidently been to relieve some, or even most, of the lifestyle pressures of a person with Type 1 Diabetes.

This question makes up a small part of CREATION’s HCP Talking Points report on Type 1 Diabetes, available to download free of charge.

The header image was sourced from Alex Proimos via Flickr, under creative commons licence.