Ten days ago, we decided to dig a bit deeper behind the bariatric surgery announcement story and see how it has impacted the opinions of healthcare professionals in the UK. Our study found that the majority of doctors were sceptical of the way the procedure would be made available to all diabetics with a BMI of over 30, with some of them considering it to be a bigger financial burden on the NHS to offer weight loss surgery to more patients instead of emphasising lifestyle changes. Tweets also mentioned the lack of bariatric centres in the UK and potential risks and complications associated with the operation.

A week later, we look at how the conversation around the topic has evolved since the NICE draft guidance was announced, analysing tweets that were posted from the 11th of July onwards. The findings of our study indicate that doctors remain sceptical about the NICE decision, fearing that the procedure might form an apparently easy way out without having taken into account the full weight of the ramifications of such a decision. New tweets bring to light novel arguments against the decision, including:

HCPs react to media and news stories on Twitter

Dr. Kailash Chand, who is also Deputy Chair of the British Medical Association, reacted to the news by tweeting at BBC Health Editor Hugh Pym and expressing his disbelief at NICE having chosen this route rather than focusing on much-needed health and diet related changes in patients. 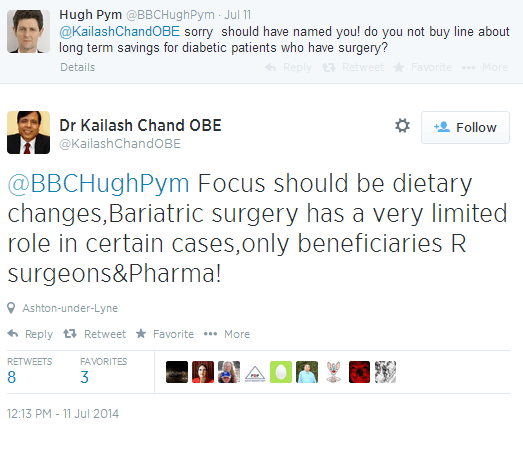 Dr. Kailash’s tweet about dietary changes also expresses scepticism about who the beneficiaries of NICE’s draft guidance will be, speculating that surgeons and pharmaceutical companies will be the ones reaping the rewards of this development if it does go ahead. The tweet was shared eight times and ‘favourited’ three times, as well as sparking a discussion about the topic with different groups of stakeholders chiming in. Interestingly, Wigan-based medical director Dr Umesh Prabhu contests Dr. Kailash’s view publicly, pointing out that diet and exercise programmes had failed and referring to the disease as a ‘time bomb’.

Eric Rose, a retired GP from Buckinghamshire, chimes in, remembering the pivotal moment when foods high in fat, sugar and salt replaced what once were more nutritious school meals:

The entire conversation can be read here.

Could increased funding be put to better use?

When @beta-betic, a digitally active journalist with diabetes, tweets about increased funding to psychotherapy and exercise being a more rational path than what is being recommended by NICE, a group of HCPs including public health workers and GPs agrees with her. 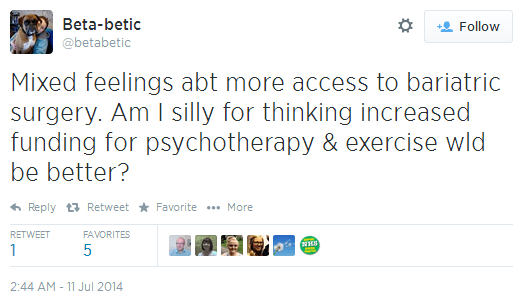 One of the comments in the thread, made by East London GP Jonathon Tomlinson, reiterates the point that surgery is not without its risks and complications, an issue that came up in our last study on the topic.

Daniel McGuinness, an Academic Clinical Fellow in London comments on the development, suggesting that we get rid of our obesity-encouraging environmental elements first. This attracts a reply from surgeon in training Kate Oakland, who suggests that for many that ship has sailed as they are already obese. Daniel stands by his earlier statement that the government should tackle the root cause of the disease while agreeing with Kate Oakland. 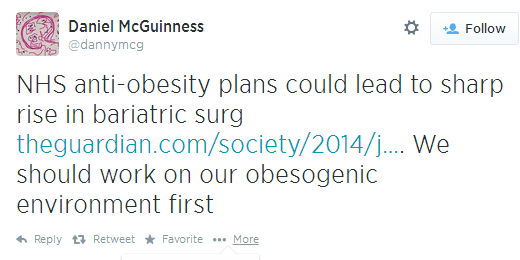 After tweeting about how complicated determining causality can be, David Colquhoun chats to London-based psychologist James Thompson, who suggests that patients who compulsively feel the need to eat after surgery will still do so. David Colquhoun, who runs a medical blog, suggests an RCT as a means of establishing the surgery’s effectiveness.

HCPs react to media and news stories on Twitter

The NICE draft guidance announcement has prompted articles in mainstream media outlets as well, with doctors sharing the ones that were doubtful about the procedure being a conflict of interest free decision, as well as a piece by UK-based bariatric nurse Sharon Bates, in which she talks about the availability of cheap, unhealthy food options. 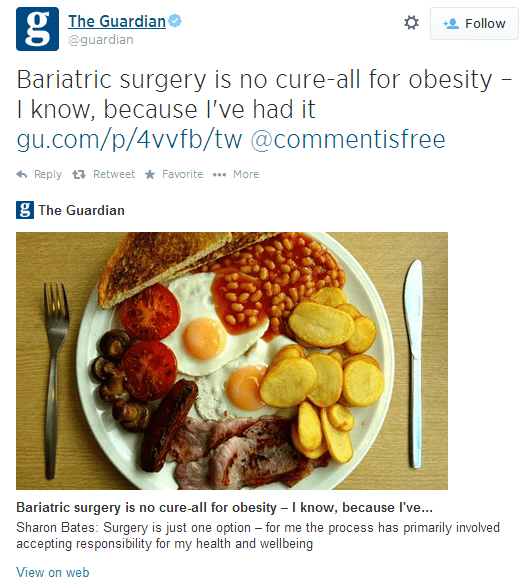 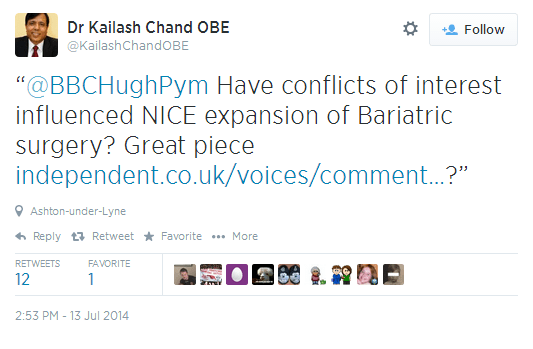 Adding to the string of somewhat cynical tweets from HCPs, UK-based lecturer in dietetics states that we need to look both at bariatric surgery as well as the diet book industry with a dubious eye as they can both be massively profitable ventures. 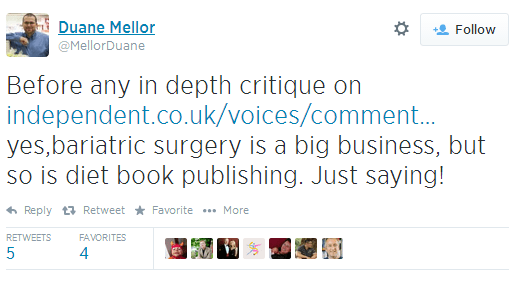 When this prompts replies from other UK HCPs, a conversation around conflicts of interest in medicine and healthcare is started. 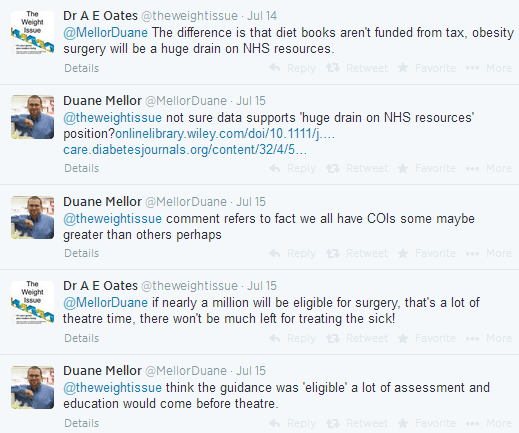 Thus, Duane is one of the few HCPs in our database who has expressed a somewhat pro-bariatric surgery view, sharing a journal article that argues for its use in eligible patients who have missed the boat in terms of diet and exercise and have an unusually high BMI. The data in the journal argues that weight loss surgery can be an effective solution if used within a proper framework of patient assessment and aftercare.

All in all, out of 46 UK HCP tweets directly related to bariatric surgery that have been posted since the 11th of July when we last investigated the topic, most doctors seemed to express sceptical views on the decision adopted by NICE, with many citing the surgery’s costliness as a reason for rejecting it in favour of lifestyle change programmes.

The pie chart below shows how many doctors have expressed a pro-surgery vs. surgery-sceptical view in our ten-day social media analysis since the draft guidance was announced in the press on the 11th of July: 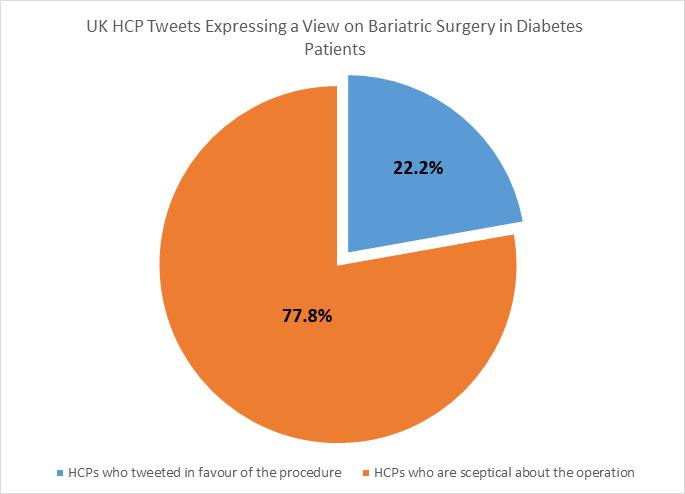 To conclude, it seems that NICE has not given the public and the medical community enough reassurance about the cost-effectiveness and feasibility of the procedure, leaving many to speculate about what private contractors would pick up the execution of the operations as well as whether this is the government is encouraging both patients and HCPs to become complacent by offering what could be seen as an easy solution.

Many HCPs and patients have entered the conversation feeling cynical and sceptical about the decision and it remains to be seen whether or not NICE are going to make any further comments on the health and financial repercussions of the draft guidance. The HCPs and patients who tended to support NICE’s view, on the other hand, maintain that the surgery is an effective preventative measure in those who are either morbidly obese or suffer from other conditions.

No matter what the outcome of the decision will be in practical, real-world terms, studying HCPs’ opinions regarding this topic has helped uncover a few of the concerns associated with prescribing the operation on the NHS and I hope that HCPs continue tackling the issue in online as well as offline conversation, in the interest of the health of pre-diabetics and diabetes sufferers in the UK in general.