According  to the Glaucoma Research Foundation, glaucoma is the planet’s leading cause of preventable blindness. As last week was National Glaucoma Awareness Week. we had a look at what doctors around the world had to say about ocular disorders and how glaucoma as a disease fits into the ocular medicine landscape as discussed online by communities of healthcare professionals around the world.

When diagnosed by their doctor with high intra-ocular eye pressure, patients may enter a state of uncertainty or anxiety, as while high intra-ocular pressure is one of the greatest factors that puts them at risk, it is not a definitive pre-symptom of the disease. However, after learning that one runs a higher risk of developing it, ‘glaucoma’ can often be a heavy concept to grapple with, as it still carries the implication of eventual irreversible vision loss if it is not detected on time or treated adequately.

We carried out a small study of healthcare professionals’ tweets about glaucoma over time from the 1st of January this year to the present day, in the two languages most used by doctors on Twitter: English and Spanish.

Here’s what we found…

1.In terms of treatment, while glaucoma type-dependent, the HCP discussion tends to revolve around topical treatments as opposed to more intrusive, advanced treatments such as surgery, although a few videos of surgeries have been shared on Twitter.

Surgery and operation related posts only constitute around 2.5% of the total number of glaucoma related posts, with some tweets in video form.

Below, a New Zealand based eye doctor tweets a link to an article that talks about an innovative scientific discovery in Singapore, where scientists have developed a painless eye injection that prevents glaucoma sufferers from having to use daily drops by slowly releasing the active ingredient into the eye over the course of 6 months. Dr. Malcolm McKeller adds the remark ‘is this the end of glaucoma drops?’, which indicates his belief that the treatment is quite promising.

In an interesting exchange about topical treatment, two Canada-based HCPs (an ophthalmologist and a pharmacist) discuss the difference between testing generic eye drops against branded ones in vitro (in the lab, on isolated individual cells) and testing them in vivo (on living organisms). They then exchange information about where their learnings have come from, with one of them mentioning a glaucoma lecture they attended in Ontario.

Looking at this exchange, we can again highlight the importance of doctors communicating with other doctors via channels that allow for quick, dynamic bursts of information. While most links are passed along and/or re-tweeted, when the occasional link and the information in it are disproved or doubted by another doctor, that is when we see constructive medical dialogue emerging – dialogue that may lead to actions which advance current care and care procedures. 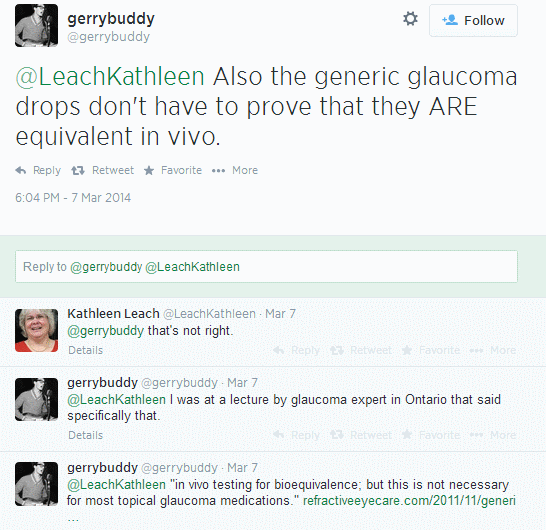 While intra-ocular pressure is a well-known risk factor, the Tweet below indicates that disorders such as sleep apnaea may also put patients at a higher risk of developing glaucoma: 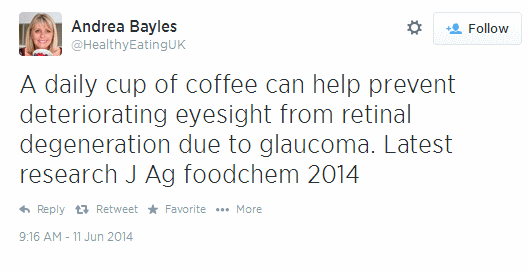 Ethnicity and gender were also two topics that featured heavily in terms of links shared by the medical community. A number of tweets around the topic sought to make followers aware of the increased risk of developing glaucoma which, they said, is greater within the female population than the male population. HCPs also shared links to studies that encouraged African Americans to have regular eye examinations due to increased risk of developing the eye disease.

Below, Dr. Pedro Perez writes a blog post on glaucoma risk in women, a development that was first published in the Indian Journal of Ophtalmology in 2013. Pedro Perez is an ophthalmologist based in Spain who writes for the blog http://www.qvision.es/. 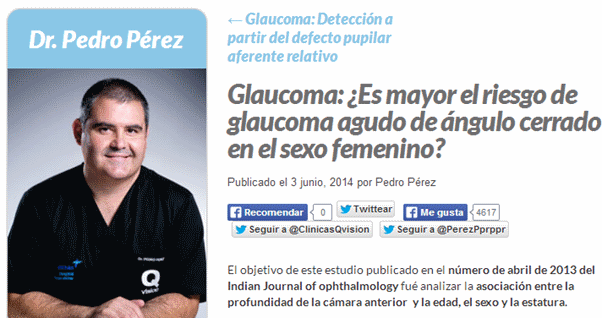 US-based HCP Ed tweets about glaucoma as the leading cause of blindness within the African American population in the United States: 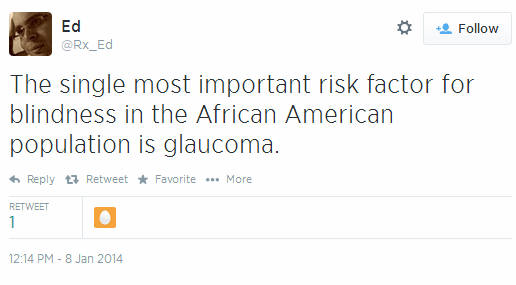 3. More than 9 out of 10 tweets made by HCPs about glaucoma on National Glaucoma Day on the 12th of March (around 100 mentions in total) were made in Spanish language, surpassing by far the number of tweets made in English about the disorder.

The Spanish language healthcare professional ‘Twitterverse’ has been on our radar for a number of reasons this year. For instance, the top 3 countries that tweeted about glaucoma on its international day, March the 12th, were Spain, Argentina and Venezuela (followed by the US and Ecuador).

Argentina-based eye doctor Lisandro Carnielli shares what he sees as a dependable resource on the disorder and is then thanked for it. 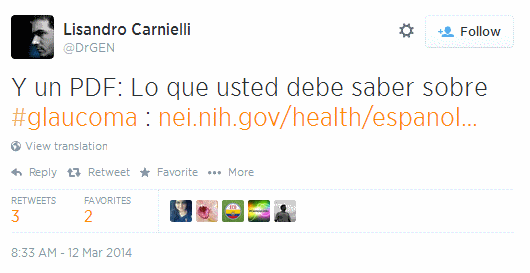 Venezuela-based Samar Yorde posts a link that encourages patients to exercise in order to combat the risk of developing glaucoma: 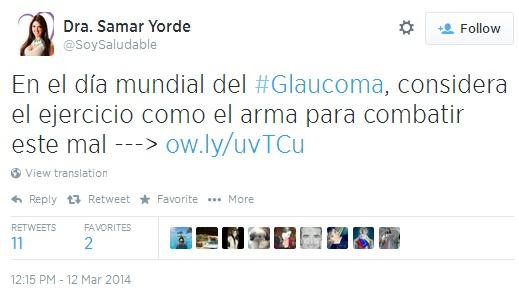 Samar Yorde uses the hashtag ‘#glaucoma’ and also mentions that it is Global Glaucoma Day and it is interesting to see that the day received a lot more traction among Spanish speaking doctors on Twitter. The popularity of Spanish language Glaucoma Day tweets in March may be very telling in terms of looking at each individual country’s government health agenda and how various glaucoma-related awareness campaigns were implemented in different regions, as this often impacts the online discussion landscape as well.