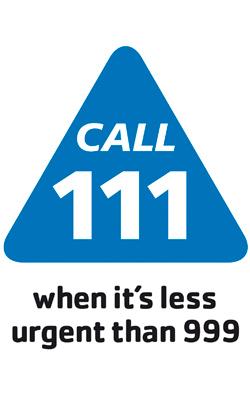 It’s been a tough few weeks for the NHS 111, the new UK health service which NHS Choices says is being introduced “to make it easier for you to access local NHS healthcare services“. According to the NHS website, “NHS 111 is a fast and easy way to get the right help, whatever the time“.

The service, which was initially launched in a limited number of pilot regions in March 2013, has been the subject of much discussion in the news and social media. In the 17 days since the beginning of May alone, Creation Healthcare has monitored over 20,000 tweets about the 111 Service, with major conversation topics including ‘patient deaths under investigation’, ‘surge in abandoned NHS calls’, and ‘bring back the NHS’.

So we thought it would be interesting to hear what those working in and around the NHS are saying. Using Creation Pinpoint, which monitors healthcare professionals’ social media conversations, we discovered doctors posting on blogs, publishing articles and being highly vocal on Twitter. We analysed 857 tweets between 1-17 May, sent by 257 healthcare professionals who between them had over half a million followers.

The volume of tweets from healthcare professionals about NHS 111 has risen sharply in recent weeks.

How are doctors tweeting about NHS 111?

Tweets by healthcare professionals reveal a resounding lack of confidence in NHS 111 and its effect on the NHS as a whole.

Doctors comments include “If NHS 111 with its multiple providers is a portent of what is about to happen to the rest of the NHS, be afraid. Be very afraid“, tweeted by @DrGrumble, an NHS doctor.

Some doctors offer views on how the service could be improved. “Urgent NHS call handling of 111 is risky & needs clear, enforced quality standards. Can’t just feed it to the market and hope for the best“, tweets @drphilhammond, a hospital doctor, prompting ten retweets and responses.

The negative sentiment reaches to future doctors, too. “Hearing about so many disgusting 111 failures already. #SaveOurNHS” tweeted @mtvpaul, a medical student in Brighton this morning, stimulating a more detailed live discussion.

“Patient told me he phoned because of urinary symptoms – was on for 20mins while they asked if he wanted to slit his throat/wrists“, replied @CrashCall, a medical student in London. 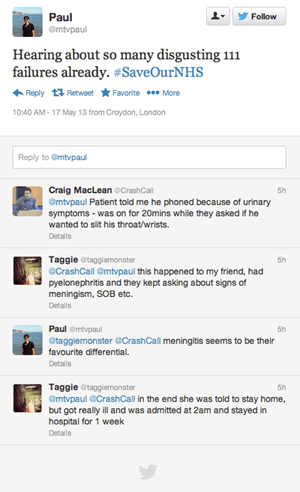 Doctors used Twitter to vent their anger, share stories of failures, and reach out to policymakers. @bendean1979, a doctor based in Oxford tweeted to @Jeremy_Hunt, the UK’s Secretary of State for Health, saying “you need to scrap the rubbish 111… and invest in a brain“, prompting a response from Emma, a nurse “111 has been a farce…“. 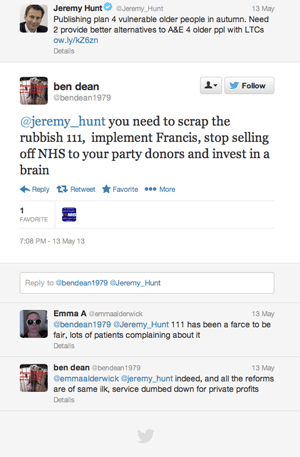 A major topic among healthcare professionals of all kinds is anger at the effects of privatisation of NHS services. “this is what happens when you replace professionals with non profs” says @cheekynurse11, a nurse, linking to a BBC news article and stimulating a lengthy discussion and 41 retweets. 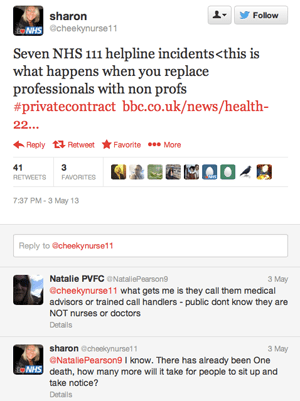 This nurse’s tweet sparks a lengthy conversation about the effects of privatisation, and is retweeted 41 times.

‘Dear Press People, it’s not “NHS 111” that is failing, it’s “privatised 111 services using the NHS logo” who are failing’, tweets @jofowles, a paramedic in Bristol, UK.

Meanwhile @dochawking, a GP who says she retired in March this year because of the Health & Social Care Act, shared a cartoon inspired by the conversation: 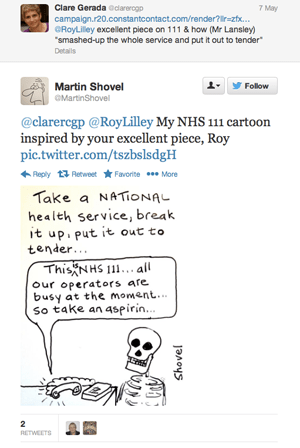 I’ll give the last say to the NHS Direct (@nhsdirect), who were at least engaged in the conversation. “Early days for 111 so your feedback is important”, they tweeted to a frustrated patient. 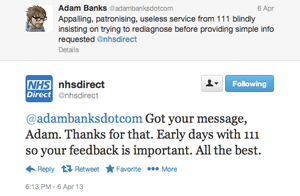 Learning from the voice of doctors online

What does this mean for health service providers in the age of digital engagement? The following observations may be helpful: