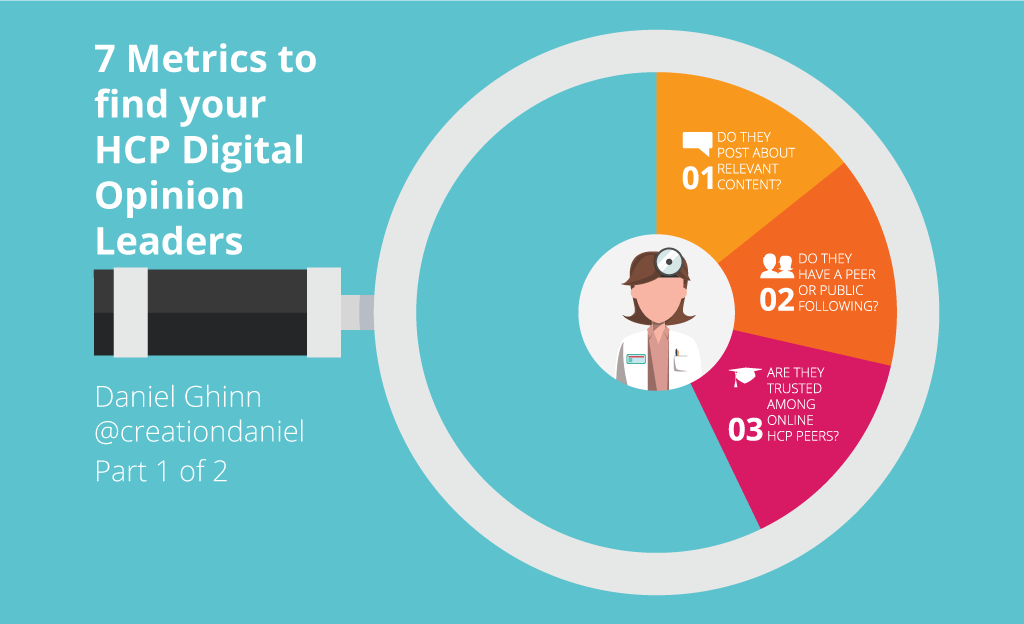 Since the launch of CREATION Pinpoint in 2013, we have been refining our methodologies for identifying and profiling the most relevant healthcare professionals (HCPs) in a given therapy area, anywhere in the world. Our technologies keep getting more powerful, with recent R&D and academic collaborations providing new advances that we have been rolling out in our most recent research studies.

In a typical HCP online study we identify the key voices within a particular therapy area in a country – those doctors, pharmacists, nurses or other HCP roles who are actively posting and sharing on relevant topics. Among those active HCPs will be some who are particularly well engaged with their peers and may even be influencing the views of other HCPs, policy makers or patients. These ‘Digital Opinion Leaders’ can have a significant effect on the direction of an online conversation as their views are shared through re-tweets, links to blogs or articles, and posts in open forums.

The precise definition of which HCPs are considered Digital Opinion Leaders within a particular CREATION Pinpoint study depends on numerous factors, which the study will consider. Over recent years, as we have developed and refined our methodologies for studying HCP Digital Opinion Leaders, we have been able to pinpoint factors that determine an individual HCP’s significance in a particular study with increasing accuracy. This allows our clients to examine the evidence for an HCP as a Digital Opinion Leader and develop an informed view on who the most significant individuals are, in the context of their specific needs and interests.

When we present you with the findings of a CREATION Pinpoint HCP study, the following factors will help you decide which of the HCP influencers we profile are the most relevant Digital Opinion Leaders for you.

When we isolate the voice of doctors or other HCPs online, however, it becomes clear that simply measuring their volume of conversation about a topic is a limited way to gain understanding about which individuals are most influential. Some doctors, for example, talk online about a wide range of topics and may contribute a great many posts on your topics of interest, but this does not necessarily mean they are influencing their peers, or anybody else.

2. Do they have a peer following or public following?
CREATION Pinpoint tells you how many social media followers of an HCP are also HCPs, compared with their number of non-HCP public followers. This ratio can provide an indication of the individual’s role on social media: a specialist surgeon who is followed by many other HCPs may be an active influencer within a relatively small number of specialists. On the other hand, a well-known or ‘celebrity’ doctor may have many thousands of public followers but could have limited online relationship with peers.

Whether or not either of the examples above should be considered a Digital Opinion Leader will depend on your criteria. If your goal is to identify possible partners for a public health communications campaign, the celebrity doctor with thousands of public followers may be a helpful ally, but is unlikely to be of much help if you hope to engage a niche community of specialists.

3. Are they trusted among online HCP peers?
While analysis of HCP social media followers may provide some initial clues about an individual’s influence online, it is a raw and somewhat limited measure, especially since much of the HCP peer-to-peer conversation taking place online makes use of hashtags, such as the #colorectalsurgery hashtag launched by a group of specialists in 2016. A hashtag is a useful way of connecting together Tweets or other posts on a particular theme, without the need for participants to be actively following each other.

A more interesting measure of HCP peer influence, also available through CREATION Pinpoint, is the extent to which an HCP is mentioned by their peers in social media conversations. By analysing types of engagement such as ‘re-tweets’, mentions, and replies, an accurate picture of an HCP’s standing within a virtual community can be illustrated, within the context of any particular topic of conversation.

So, while a particular medical doctor may have a high degree of influence within a conversation about her specialism, the same doctor may be ignored by peers on other topics. Simply measuring the volume of individual HCPs’ conversation on a topic would be insufficient to identify which doctors are trusted among their peers.

In the second article in this series, I share the four remaining metrics to find your Digital Opinion Leaders. For more information make sure you reserve your place on one of our upcoming webinar dates in which I will present more insights on these metrics and answer your questions in a live session.