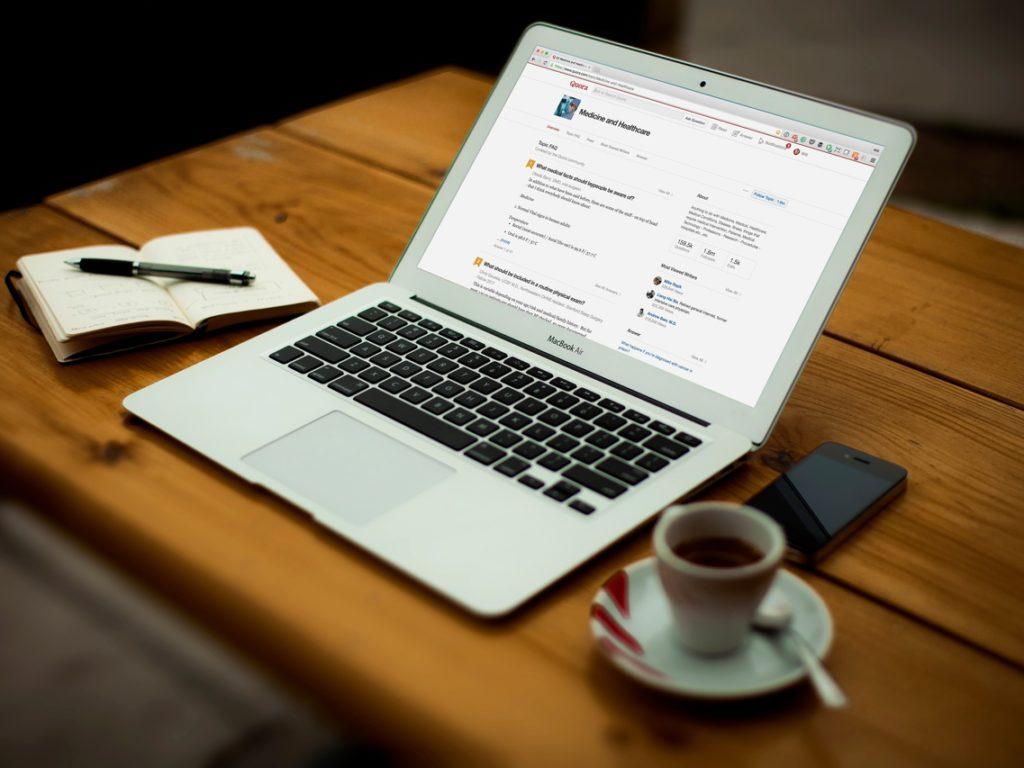 This post is part of an ongoing study of emergent social websites, and their role in healthcare professional conversation. To view other posts in the series, please click here.

The focus for this article is to assess the use of Quora by the health community, and specifically answer the question of how healthcare professionals (HCPs) are using it for interactions, either with their peers, or with patients or patient groups.

The world loves questions. They are a key part of how we relate to each other and how we find out the information we need. Questions form the basis of some of the greatest scientific discoveries, and are the foundation of friendships and romances.

With this in mind, it’s no surprise that our love of questions has bled over into the digital realm as well. While tools for questions and answers have existed for decades (you could argue that entering text into Google Search is akin to asking the Internet a question), one site that has risen to prominence over the past few years is Quora:

“Quora’s mission is to share and grow the world’s knowledge. A vast amount of the knowledge that would be valuable to many people is currently only available to a few.”

Quora hosts a wealth of knowledge, some broad, around topics such as technology, with wide interest groups, as well as other very specific conversations, such as evolutionary genetics, with few contributors, but rich depth of content. Whatever the topic, you are likely to find people asking and answering questions around it on Quora.

Is the Doctor in?

With any channel, cutting through the noise of generalist conversation is often a challenge; Quora, however, is more approachable than others in that it breaks down conversations into topics and groups, as well as by user.While it would be wrong to call Quora an ‘emergent’ site, having been set up in 2009, it is one that has recently seen a lot of activity from healthcare professionals. The number of interactions and the size of groups has grown steadily and is now at a point where it can be considered a significant outlet for HCP engagement.The largest group to feature HCPs on Quora was Medicine and Healthcare. At the time of writing, the topic had over 157,000 questions and 1.6m individuals following the conversation. Of the top 10 writers within the topic, seven were HCPs.A secondary topic group is Doctors, a group with over half-a-million followers and 18.5k questions. Of the ten most active writers, nine were HCPs.While usage of Quora by HCPs is of course varied, generally speaking it can be broken down into a few specific areas:

When diagnosed, many patients turn to the Internet to try to answer some of the questions they have regarding their illness.Sometimes, these questions are incredibly personal, and require a degree of tact to answer. Below you will see socially-prevalent oncologist, Jack West MD provide a factually accurate, yet hopeful answer to the question I have stage 3 lung cancer, what are the chances of survival? 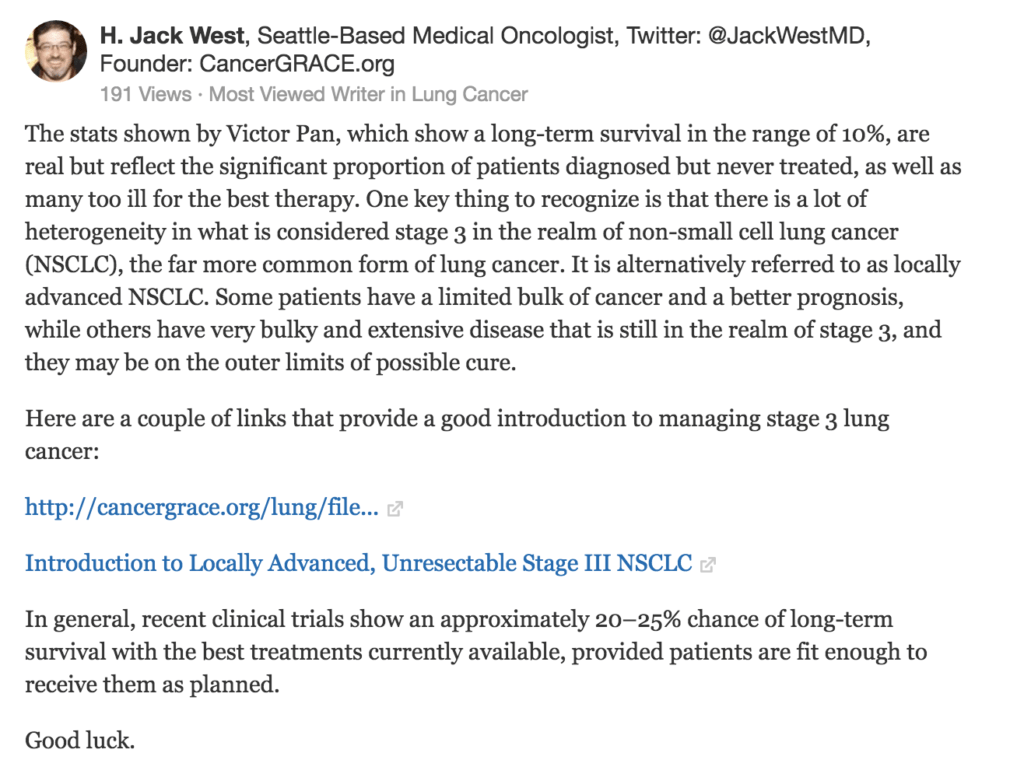 Many physicians use Quora to test theories and ask questions of other HCPs. Sometimes these discussions are around disease areas or treatment methodologies. However in the example below, we see a very candid and open discussion between HCPs. The chosen response from radiation oncologist Marc-Emile Plourde on the question ‘As a medical doctor, what is the biggest mistake that you’ve made?’ is particularly transparent.Plourde went on from this mistake early on in his career, to create MD on Call, to provide other healthcare professionals with advice on frequently encountered ‘on-call’ medical situations. 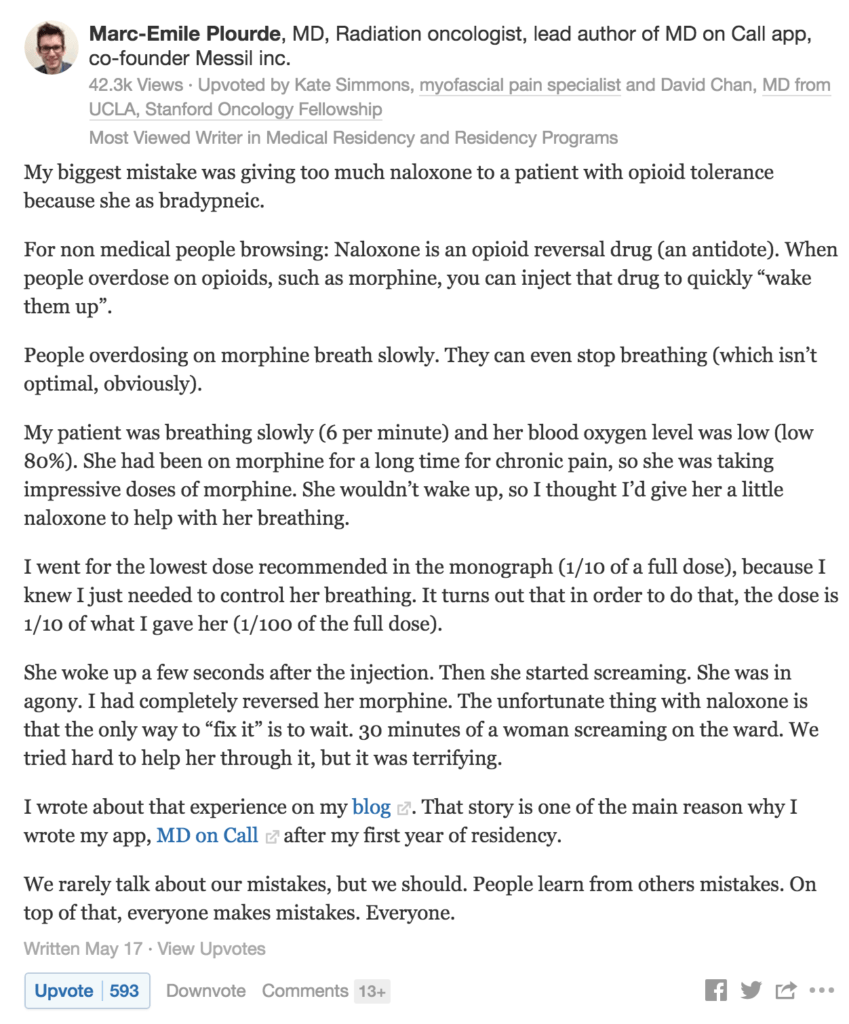 You can read more about this particular story and the outcome on Plourde’s blog.

Learning anything requires a student to ask a lot of questions. Becoming a healthcare professional likely requires more answers than most.Another key area where Quora shines is that it has become a learning platform for a plethora of medical students looking to answer some very specific questions, as well as find out broader opinions on the industry and work-life of an HCP.In the below example, an anonymous questioner asks Doctors: What is some advice to students going through medical school?HPB Surgeon, Vinay Kumaran adds his seasoned advice alongside a number of other healthcare professionals and other students. 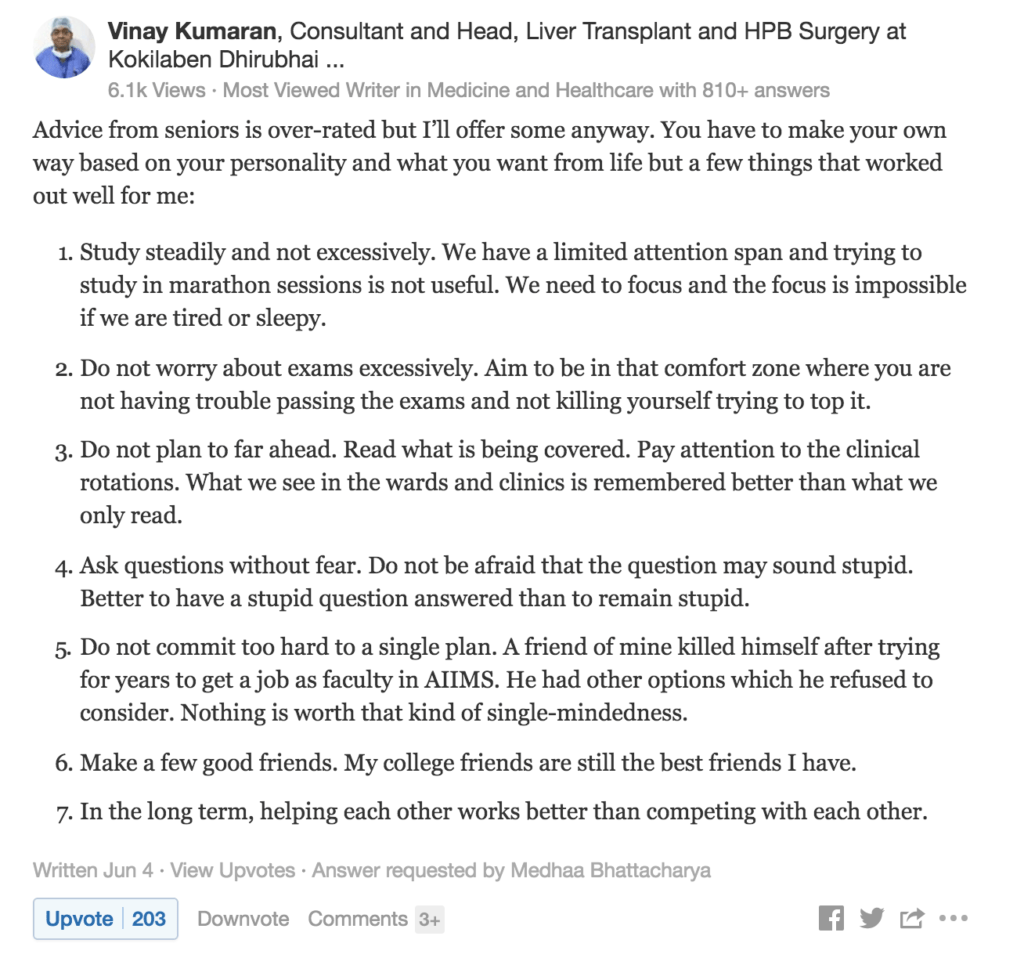 Engaging in conversation regarding their profession

Being a medical professional is a highly-skilled profession, and as such it creates intrigue from non-HCPs. From our research on Quora, there are plentiful questions on how physicians conduct themselves and how they react to certain scenarios.In the below example UCLA Oncology MD David Chan replies to the question “As a doctor, what do you do when you see someone with an ailment in public?” The response stands out among others, as many choose non-interference as their option. 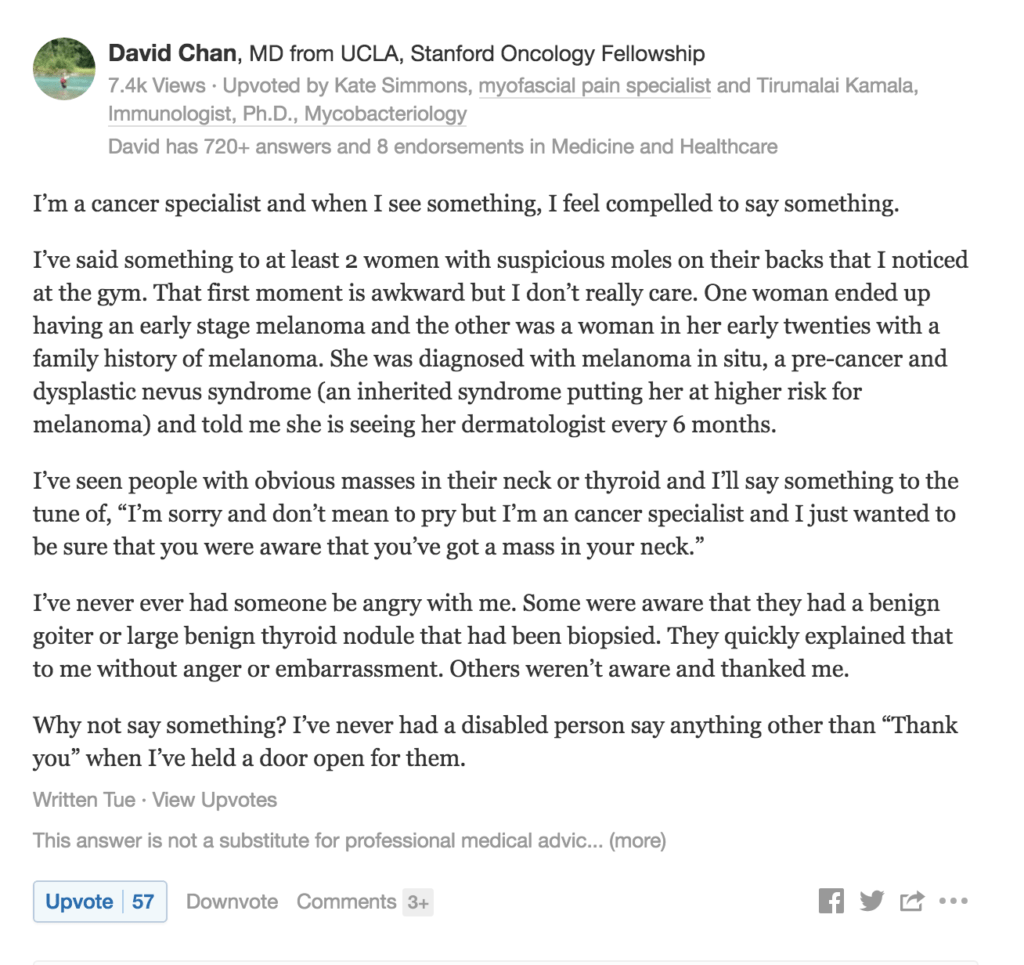 While this simple clarification does not cover the full breadth of HCP engagement on Quora, it does give an indication of how physicians and other medical professionals view their peers, as well as showing how they are viewed by the wider online community.

More often than not, social media channels and online networks can appear one-sided, with communication being very outward looking. Quora changes this dynamic. By using questions, instead of statements as the starting point, conversations flow more naturally.

We look forward to continuing to explore Quora and the HCP conversation preserved within. It is a place where there is significant activity of doctors, nurses, pharmacists and medical students and we will be sure to track growth over the coming weeks, months and years.