One of the first in a series of post-election health reform oriented announcements, Jeremy Hunt recently announced plans to make GP surgeries accessible 7 days a week, calling the initiative a ‘new deal’ for GPs, whereby in return for the extended opening hours, surgeries would receive financial investment in the areas of technology and innovation.

The prospect of a 7 day GP surgery would be fairly novel within Europe, as presently many countries operate under an out-of-hours emergency primary care system, which means one is able to make an appointment at the weekend if their condition is deemed urgent enough.

While in the mainstream press it has been made clear that the majority of HCPs in the country oppose the deal, with the head of the BMA declaring that the plan is ‘surreal’ and ‘must be scrapped’, we used Creation Pinpoint to take a look at the chief concerns behind doctors’ consternation as discussed on public social media.

HCP conversation around the subject took off in May 2015, and the study analysed social media posts from 609 unique HCPs, who contributed 1,800 individual posts.

Main Concerns are Funding and Lack of Clarity

While the vast majority of HCPs articulating their views were in disagreement with the proposed deal, we analysed their online conversations in order to quantify the reasons why. The study found that funding was the chief concern voiced by HCPs, followed by uncertainty with regards to how the deal actually defines 7-day access in the area of elective care.

Leeds-based GP Richard Vautrey posted a tweet encouraging the government to listen to what patients want, which is not 7 day surgeries.

7 day routine service was not what patients wanted. Time to start listening and make better use of scarce NHS funding http://t.co/K0ThQkvjlE

He subsequently received a reply from a member of the public who pointed out previous experiments with extended opening hours, and how Saturday mornings have not been an optimal solution.

I was also interested in which therapeutic areas HCPs perceived were most vulnerable to worsening in standard of care if the programme was implemented. Other than A&E services, which doctors discussed widely in conversations about 7-day care, paediatric/children’s care, oncology and cardiovascular were the 3 next biggest therapy areas about which doctors expressed concern. 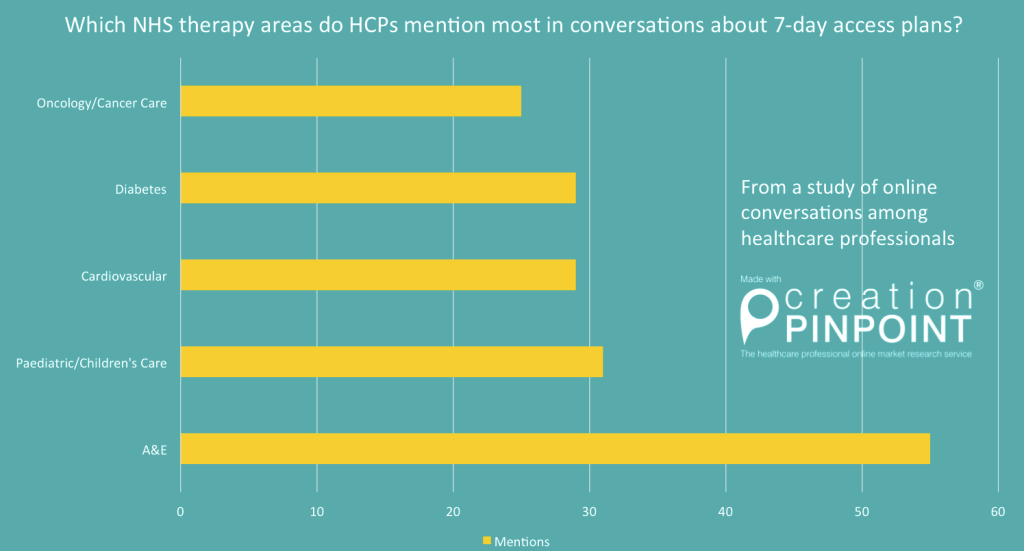 Interference with the continuous and successful execution of treatments in various therapy area includes, but is not limited to missing cancer diagnoses due to pressure to attend to more patients’ needs, or integrating psychological support within diabetes care.

Partha Kar, who has been leading an initiative to offer better integrated care in diabetes, states that from a diabetes specialist perspective, he would first like to see better support for 5-day care nationwide, before moving on to extending that service.

The flipside of the announcement: cutting unsocial hour pay to fund 7-day access?

A secondary announcement related to the 7 day access initiative was that in order to fund the programme, some nurses’ unsocial hours pay would have to be cut.

The link to a BBC piece on how further nurse cuts would affect the national health system, which also explains that there are currently 2,295 fewer nurses than there were in 2010, was one of the most shared during the study period.

Nurses are perceived as one of the key roles to delivering any sort of extended care service and many of them have pointed out that they are currently already working 7 days a week. With the RCN announcing plans to take action by striking if OOH pay was diluted, many other HCPs sympathised with nurses, sending supportive tweets.

Pharmacists all over the country also chipped in with supportive messages, with some pointing out that the role of pharmacists would also be crucial in supporting an extended hours NHS. This would of course come with its own implications, including better preparing pharmacists for patient-facing situations. Robin Conibere says:

“…as long as pharmacies equipped better for patient facing roles”

Below is a summary of some of the concerns expressed by nurses and pharmacists in the study.

Opposing Views: HCPs who believe it is the government’s duty to offer 7-day care

While the overwhelming majority of HCPs expressing views on social media were of the opinion that as it stands, the current NHS should have other priorities than extending elective care to an everyday service, this view was of course not unanimous.

“We know more patients die after surgery because of reduced care at weekends. 7-day working can save lives”

From funding to staffing and taking into account health disparities, the government may need to radically reform the terms of the programme to more efficiently align itself with healthcare professionals’ needs. As it stands, it would appear that the initiative to expand access to care over 7 days a week is viewed as a political ploy and an unrealistic plan which may cause more problems than it is beneficial if implemented.

Having said that, in my own view, 7-day-a-week elective care is an admirable objective and it remains to be seen how receptive the current government will be to UK healthcare professionals’ advice on the matter, and to collaborating with them on a deal that is truly perceived as being the best option for delivering the best possible health outcomes for the largest number of people in the country.