Diabetes is a chronic condition that affects millions of people around the world, and so it is an area of concern for a large number of doctors, and for pharmaceutical companies. Traditional social media monitoring approaches may be particularly problematic for this important topic area, due to the large volume of jokes and comments by the general public on the subject (see here for an example). We used Creation Pinpoint to see how diabetes is discussed by doctors in Spain using Spanish language. Creation Pinpoint focuses only on conversations between healthcare professionals (HCPs), which automatically removes the vast majority of irrelevant comments, as well as greatly decreasing the risk of discovering an online adverse event.

We analysed 3976 HCP mentions of diabetes and related terms in Spanish. The topic cloud shows the key areas of discussion in the study, which include diabetes and “diabetes type 1” as well as “risk of diabetes”, “practical clinical guide” and “patients with diabetes”. The name of the user LlobetMarina features in the word cloud, suggesting that this user was active in the area of interest, and/or that his tweets were commented on and re-tweeted. 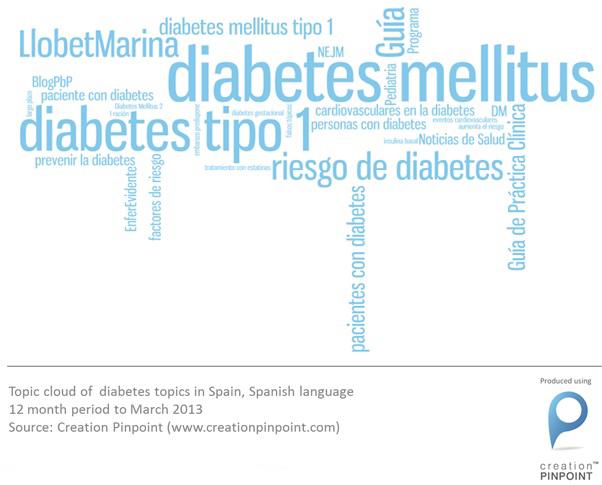 Whilst part of the conversation volume in such social media monitoring studies is due to the sharing of links on Twitter, in this study, a significant volume of content directly from HCPs was found. Many of these tweets are anecdotes, tips, or statements of fact or opinion. The following tweet translates as “NICE guidelines in moderate hypertension treat with drugs if there is a large CV risk, diabetes or CV disease”. 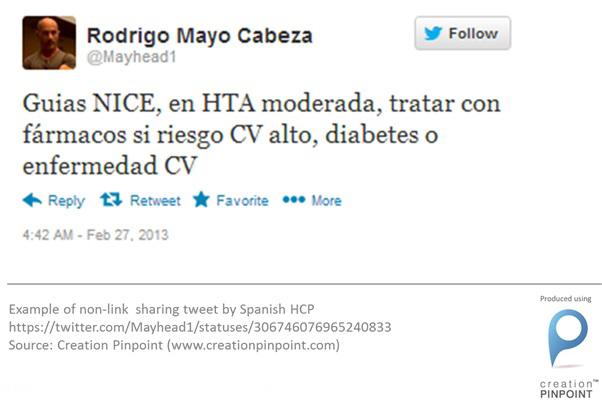 Below is part of a conversation between Spanish-speaking HCPs about diabetes. Translates as “Exercise can decrease the dose of insulin by up to 30% in people living with diabetes”. 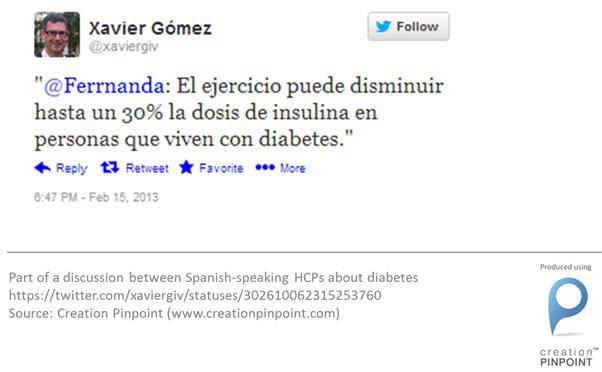 An interesting account that displayed activity during the study is @iClinicoMadrid, belonging to the Innovation unit at the Hospital Clinico San Carlos in Madrid. This is a group set up for the sharing of ideas within healthcare (see here for a discussion in Spanish). There are associated Twitter and YouTube accounts, and the following tweet further highlights the importance of social media in this setting : “The next 19 March in #ideasincubator we will be talking about medicine on social networks – diabetes, cancer cardiology”. 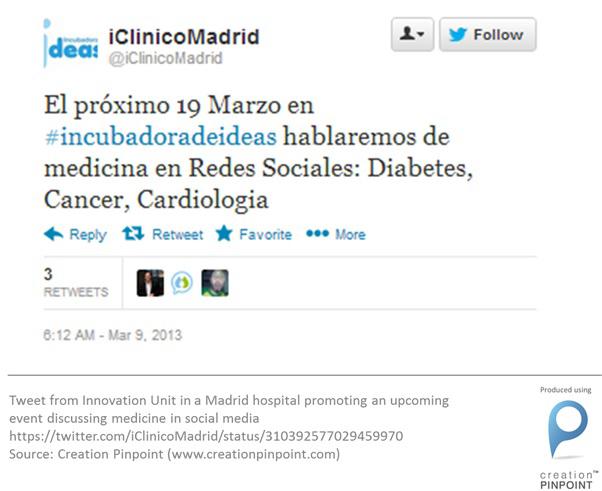 The top hashtags used in Spanish conversations around diabetes include #diabetes, #salud (health), #dm1 and #salu20. The infographic  shown here is an analysis of how this last tag was used in March 2012. The existence of Spanish-language healthcare-related hashtags and of the analysis of these tags suggests that online engagement around healthcare is strong in Spanish-speaking countries.

The top 5 HCPs tweeting on the topic of diabetes in Spain using Spanish language during the study period were:

This brief analysis shows us that influential Spanish HCPs are active on the topic of diabetes on Twitter. The existence of Spanish language hashtags and of analyses of these tags by communications agencies suggests that there is significant online discussion of healthcare topics in Spanish.