During September 2014, it was my pleasure to represent Creation Healthcare at the Stanford Medicine X conference, sharing the first ever worldwide analysis of more than 100,000 healthcare professionals (HCPs) on Twitter. The presentation and poster drew a lot of attention and interest from participants, particularly from HCPs themselves who recognised the significance of channels like Twitter and their impact on the clinical landscape.

The final poster showed an analysis of the online networking activities of 100,625 globally distributed healthcare professionals (HCPs) on Twitter, indicating an increase in their use of public social media for clinical and professional purposes.

The story behind the data

Key to the methodology for developing the poster, a series of data processing stages first of all find potential healthcare professionals who are using public social media channels like Twitter. Once identified, it is only through a human Data Quality Team that an individual is hand-picked for inclusion in a study. Then, it is possible to undertake various data processing steps. 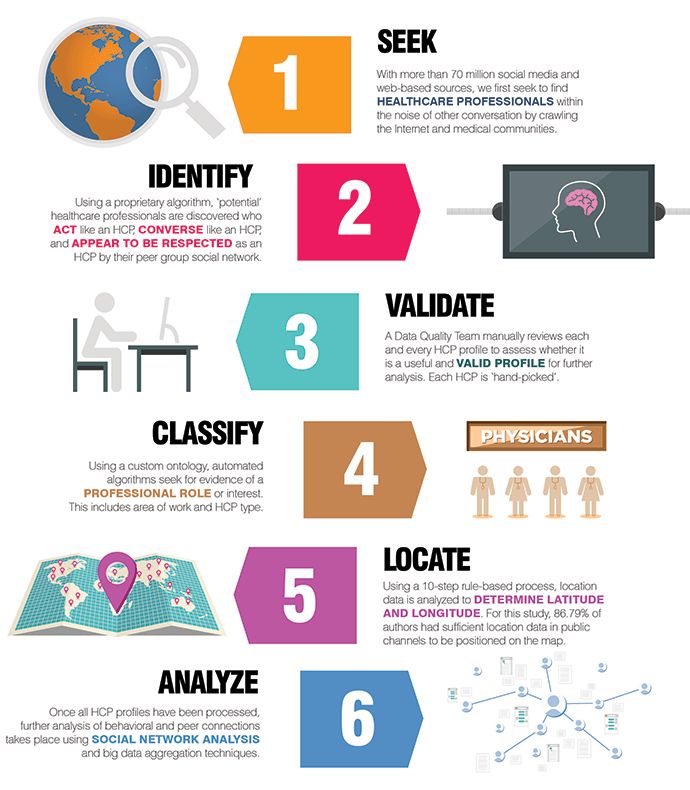 The methodology used in obtaining data for the Stanford Medicine X poster presentation about healthcare professionals and their use of public social media channels such as Twitter.

The top ten role types were further analyzed to better understand how behavior varies by location or by profession. In terms of distribution, we found that more than 45% of the HCPs using Twitter are located in the United States. Westernized countries such as the United States have more nutritionists and dieticians – could this be because of the differing diets and cultures in comparison to, for example, Asian countries? While the uptake of social media in the United States appears to dominate the data, it is important to note other regions which have high uptake but may not necessarily be evident from the map alone.

Countries including Saudi Arabia have very densely located populations, due to the predominantly desert environment. Here, we see very few actual dots which belies the fact that around 2,000 HCPs are using Twitter for clinical purposes in the Middle East alone. Other areas like the United Kingdom, Japan, or the Netherlands, reflect the distributed nature of each country’s population.

There are other insights within the data. Nurses make up a majority of the professionals using public social media. They tend to have relatively few followers, typically friends and colleagues – and they share many updates. Conversely, Surgeons have a lot of people following them however they post fewer updates in general. 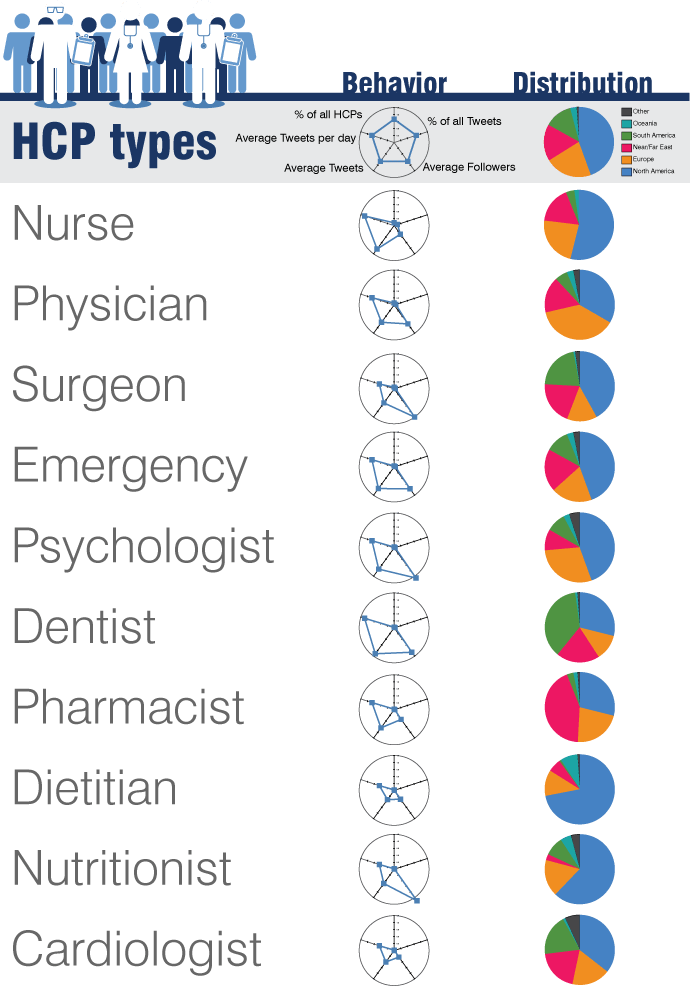 An analysis of role types and regional variations according to distribution and behavior revealed new insights about healthcare professionals using Twitter for clinical and professional purposes.

Of greatest interest to attendees at Stanford Medicine X are the sheer ‘big data’ numbers reflected in the analysis. With more than a million tweets per week, it is not surprise that this new intelligence source is a rich repository for gaining understanding about trends and concerns in health care.

If you haven’t already, please visit our slideshare page to download your free copy of the poster.