The past few of years have seen healthcare companies increasingly take to Twitter to host and participate in public online conversations with stakeholders including healthcare professionals (HCPs) and patients. Even in the regulated pharmaceutical industry, open ‘Tweet chats’ are now becoming popular tactics for engaging audiences on a particular topic.

Tweet chats are usually time-limited conversations on Twitter in which anybody may take part by using a common ‘hashtag’ – a single word preceded by a hash (#) character. Pharma companies hosting a Tweet chat do so by announcing the time and topic of a chat and typically stimulate engagement through a series of conversation-starting questions.

“Hashtags are like campfires: people gather around them to have conversations”, claims Twitter in its case study of Boehringer Ingelheim’s COPD Twitter campaign. The ‘fire’ analogy is particularly appropriate: just like a Tweet chat, a campfire can be a safe place where people share stories, but needs good planning to keep it safe.

The first ever pharma-hosted Tweet chat, I believe, was AstraZeneca’s #rxsave chat which took place in early 2011. The chat generated hundreds of tweets from a diverse group of stakeholders. At the time I interviewed Jen McGovern, AstraZeneca’s Director of Patient Assistance Programs. “We thought that using Twitter would help us reach a broader audience of community advocates than through our traditional channels”, she told me. “We wanted feedback on how to operate our prescription assistance programs more effectively and efficiently to serve patients.”

Even before AstraZeneca’s #rxsave chat, Pfizer was an early pioneer of using Twitter to engage patients on health topics. In 2010 it launched @ManMOTUK, a Twitter profile for UK audiences in collaboration with the Men’s Health Forum. The company actively encouraged men to talk directly and confidentially with doctors about sensitive health matters during weekly live surgeries hosted on its ManMOT website. Although not strictly a Tweet chat, Twitter hashtag #manmot was used to promote the initiative. The ManMOT campaign channels have since been handed over to the Men’s Health Forum, which continues to operate the initiative.

Here’s a brief summary of some notable pharma Tweet chats.

Boehringer Ingelheim hosted its first Tweet chat during the European Society of Cardiology Congress in September 2013. Participants included HCPs, patients and patient groups and the company subsequently repeated the Tweet chat in 2014, with increasing levels of participation. 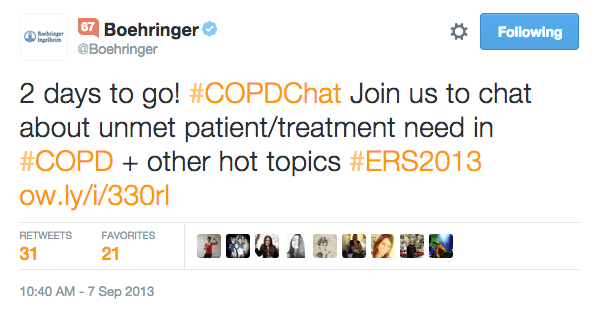 Pfizer’s #JWCChat, in partnership with caregiving advocacy group AARP, focused on caregiving, aligned with National Family Caregiving Month in November 2013. The chat formed part of the company’s ‘Get Old’ campaign and the hashtag #JWCChat linked with ‘Juggling Work and Caregiving’, a book by Amy Goyer’s sponsored by Pfizer. 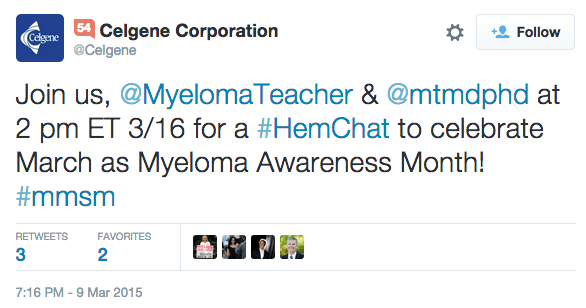 Celgene promotes its Tweet chat with patient and HCP partners. 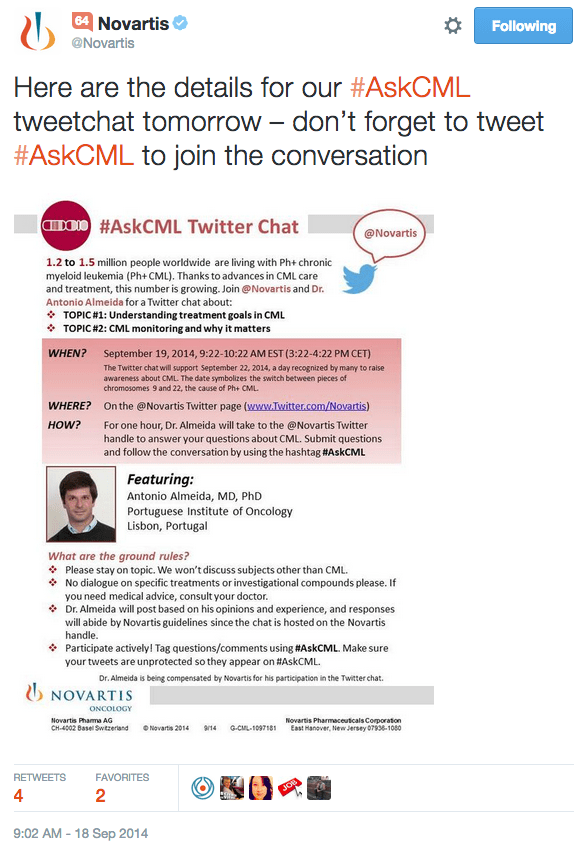 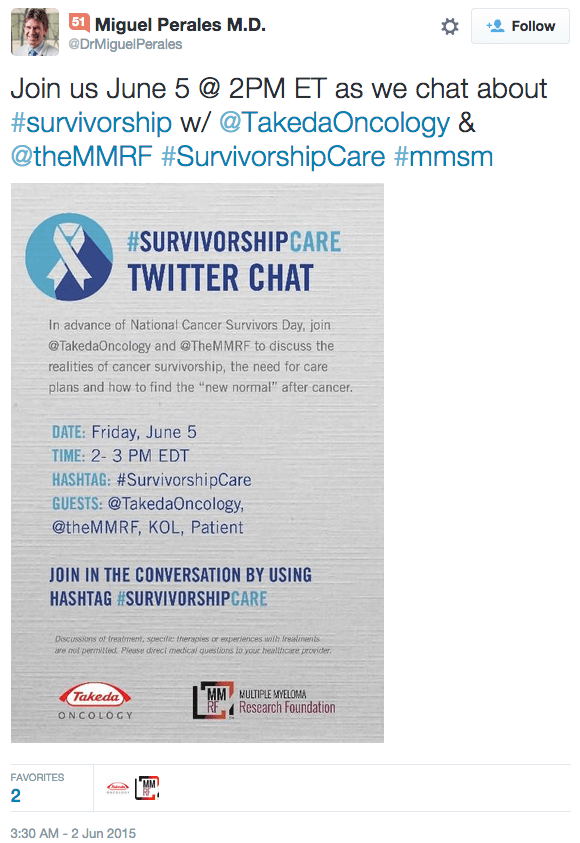 Sanofi Diabetes placed a tweet chat straight onto congress Twitter hashtag #2015ADA during the American Diabetes Association meeting. In keeping with Sanofi’s track record of stimulating social media use among stakeholders, the chat topic focused on social media and was directed well away from product or therapy discussions. During the chat, Sanofi reached out directly to stakeholders including healthcare professionals who were already engaged in the ADA meeting. 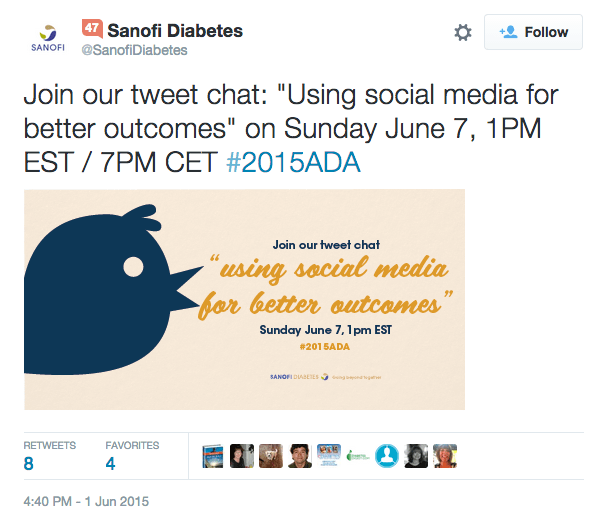 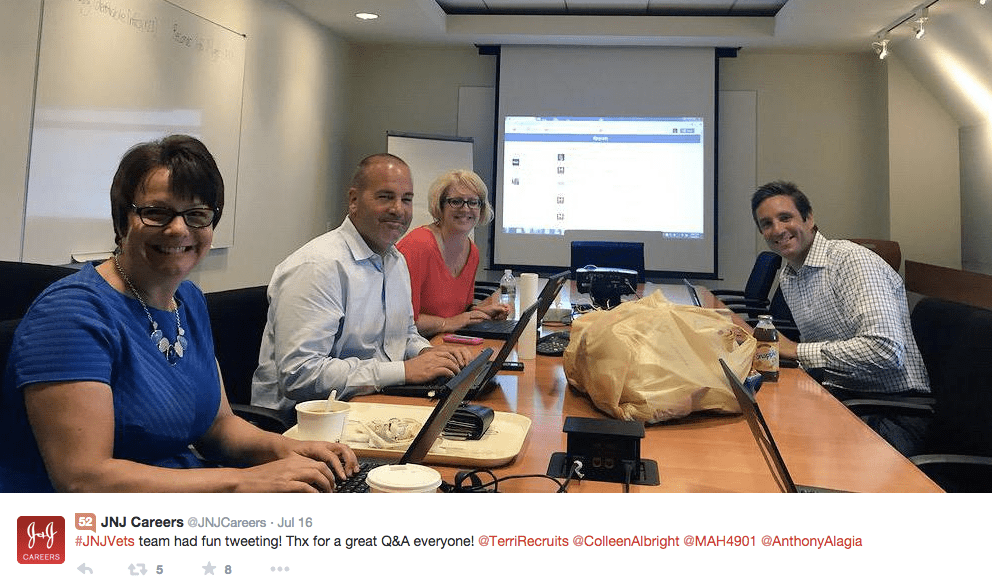 Next month, I’ll explore what makes a successful pharma Tweet chat and share some tips from the field. Watch this space.

In the mean time, let me know by commenting: what are your favourite pharma Tweet chats?

This article was originally written for Daniel Ghinn’s ‘Pharma Gets Social‘ column on pharmaphorum.