Tesaro Discovers the Power of the e-Patient

By conventional measures of social media success, Ahava Emuna Lange is not a social media ‘celebrity’. At the time of writing, she has 116 followers on Twitter and has posted just 152 tweets. A little over 500 people ‘like’ her Facebook page. She authors a blog, Mama Bla Blah, which she describes as “Once random ramblings of a full time mama +5, Mama Bla Blah became a therapeutic outlet for a young mother diagnosed with stage 3 Ovarian Cancer in July, 2012”.

On the other hand, the power of Mrs Lange’s social media activity demonstrates that she, and countless other so-called e-patients, are anything but average. Earlier this month, it took just a few hours after she publicly shamed US-based pharmaceutical company Tesaro, Inc for the company to reverse its position on unblinding a clinical trial and issue a public statement affirming Lange, as her friends and supporters rallied behind her online.

According to Lange’s blog, she had been participating in Tesaro’s NOVA clinical trial for ten months. The trial is a randomized, double-blind, placebo-controlled study of niraparib, in which patients receive either the product niraparib or a placebo, in the ratio 2:1; so one in three random patients receives only the placebo.

Lange posted a copy of her contract with Tesaro on Facebook and Twitter, underlining text that reads “I will be given bottles with capsules containing either niraparib or placebo (capsules that look like niraparib but contain no active drug)… If deemed necessary, the study doctor can find out which capsules I am taking.”

A cry for help

On her blog, Lange wrote about her dispute with Tesaro in a post entitled “TESARO pharmaceutical – Will Watch Me Die” on 5th July, explaining that her doctors had requested to know whether or not she was taking a placebo as part of her participation in Tesaro’s Niraparid NOVA study, since she was experiencing a recurrence of ovarian cancer. She included an open letter to Tesaro stating that “the Niraparib Tesaro group is refusing to unblind the study”. The post was a passionate cry for help from the online community. “I’m posting this publicly in hope that someone ‘out there’ can help me”, she wrote. “If you or someone that you know can help me, please reach out to me. Thank you!”

Friends and supporters were quick to respond. “I have emailed Tesaro”, commented one supporter on the blog. On Lange’s Facebook page, friends responded with offers of help. “Have you… attempted to speak with them?” asked one friend. “Can I start a petition on your behalf?” offered another. 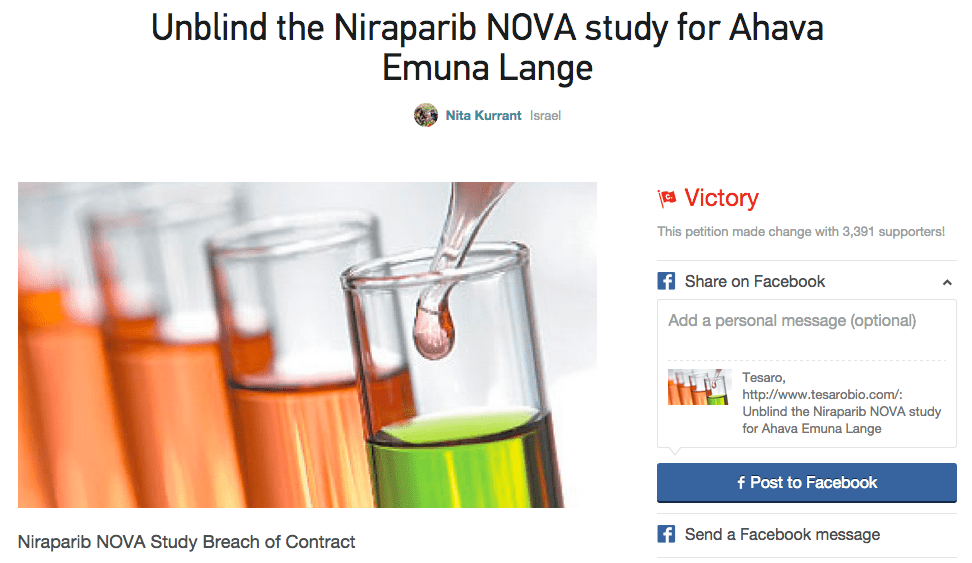 Within just a few hours of Lange’s posts, the petition started by a friend was live and being shared with thousands of supporters. More than 3,000 people signed the petition.

To its credit, it took less than twelve hours for Tesaro to post its first ever tweet in response to the wave of social media support for Mrs Lange’s story. In the tweet, the company stated it was in the process of unblinding the trial for Mrs Lange, who tweets under the name @Happylanche. “We take our commitment to patients seriously. We have been working with @Happylanche ‘s physician to initiate the unblinding process”, tweeted Tesaro. 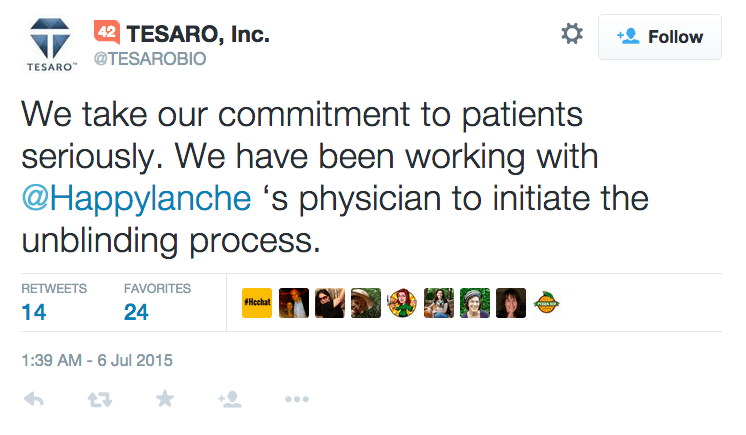 Tesaro, Inc responds to e-patient Ahava Emuna Lange with its first ever tweet

The Internet has opened many new opportunities for clinical trial reach and participation; earlier this year I write in this column about how Novartis is transforming clinical trials through social media. But social media brings new risks to trials too. Last year, Pfizer’s head of Clinical Innovation for Worldwide Research & Development, Craig Lipset, published concerns in Nature Medicine Journal that patients’ use of social media was potentially skewing research data. He cited examples including blogs, discussion forums and patient social media platform PatientsLikeMe as channels where clinical trial participants are sharing experiences, even collaborating to identify which arm of a particular trial they are on.

“Social media use might compromise the integrity of research studies and… it might also offer new opportunities”, wrote Lipset.

Lange’s story, though, is not about skewing trial data but rather about social media’s role in a dispute between a trial participant and a pharmaceutical company. 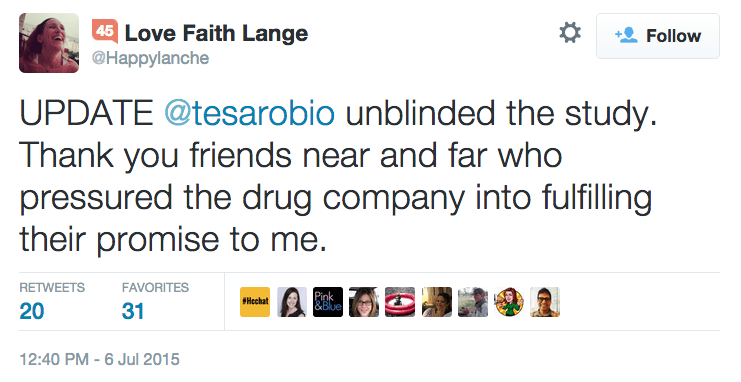 The power of patients on social media

It is not the first time I have written in this column about the power of patients and consumers taking action in social media against a pharmaceutical company. Back in 2012 I wrote about Christine O’Connell’s Facebook campaign against K-V pharma in a story that ended in the company filing for Chapter 11 bankruptcy. In 2013, I told how Rhene pharma lost $160m in share value after a popular comedian apologised on social media site Weibo for his part in advertising the company’s products.

In the digital age in which we live, social media is a powerful channel for activism, and people unite around causes. Pharmaceutical companies have the opportunity to support and develop causes, collaborating with patients and stakeholders, or conversely to have causes directed at them. In a society made increasingly open and democratised by social media, there is incredible power in the connected individual.

This article was originally written for Daniel Ghinn’s ‘Pharma Gets Social‘ column on pharmaphorum.