There are several factors that have sent global health authorities into an accelerated state of alarm as what is the biggest Ebola virus outbreak in recent history unfolds around the globe. Apart from the sheer size of the epidemic in terms of numbers, it has also been noted that the outbreak is largely due to human-to-human transmission of the virus. This is relevant as a factor that may have fuelled public anxiousness around the disease, dispelling illusions of people contracting the virus from animal bodily fluids from the public imagination. We now know for a fact that health workers in affected areas have been exposed to an abnormally high number of cases and can trace the ways in which that has systematically led to the collapse of regional health facilities. In addition to this, other long-term repercussions of the outbreak have also been documented, with some predictions from experts anticipating a high number of deaths arising from the collapse of regional economic activity alone.

Since the first case of Ebola in the US was diagnosed in Dallas, we’ve seen the number of related online conversations increase quite sharply. As the collective online conversation shifts its gaze towards disease control procedures and the search for an effective treatment intensifies, we look at what healthcare professionals around the globe have been saying about the outbreak. Watch this space for weekly updates on the global conversation around the Ebola virus as experts and medical authorities attempt to identify disease patterns to reduce rates of infection.

The Ebola conversation is truly global in nature

From a high level perspective, glancing over the data shows that HCP conversations happening around the topic are truly global in nature. The figure below shows higher than usual rates of participation from a variety of countries. While the US, being ahead of the curve in terms of internet use among HCPs, is still the country with the most mentions of keywords related to the disease, there is no close second, the rest of the conversations being quite evenly distributed amongst a number of countries.

The chart below shows the top 10 countries tweeting about the virus (HCP conversations only), as well as a few examples of HCP discussion in different languages. 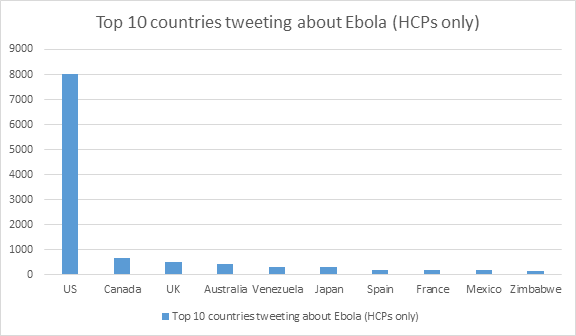 Among the concerns expressed by HCPs were patient confidentiality, false alarms due to misinformation, and the spread of the disease to other parts of the world, such as the Caribbean.

Below, Spain-based physician Rafael Timermans tweets about how an example of a first false alarm related to Ebola in Spain might signal the coming of a new wave of patient alarm.

Obesity specialist from Caracas, Venezuela M. Berrisbeitia tweets a link to an article that announces Barbados’ prime minister’s speech about the potential calls to action that may be needed if the virus should spread to the Caribbean. Demonstrating the importance of and speed with which prevention messages spread within the HCP community, we can see that her tweet has got 26 re-tweets and a few favourites. 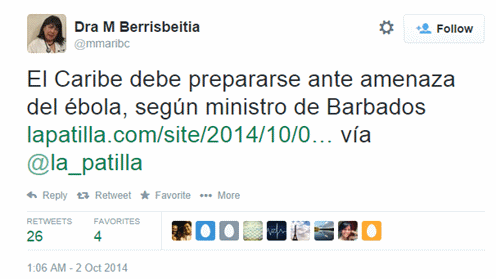 HIV clinician Sindi Vanzyl tweets about how she hopes the US case will be handled by the authorities, given that there is only one so far, and yet it has attracted very high levels of media attention. The latter is due to authorities and patients aspiring to find out how the disease was carried across continents and how this can be prevented in future. 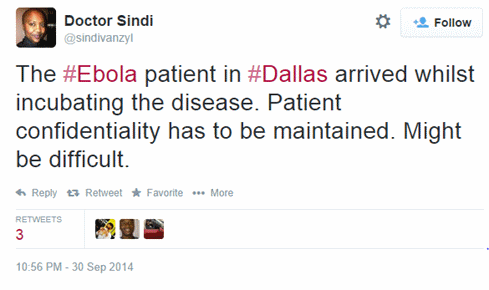 With tweets coming from Argentina, Australia, Brazil, India, Zimbabwe, Nigeria, and other countries, we begin to look at what sources HCPs around the world are using to inform both themselves and their peers of the right course of action locally.

The Twitter accounts with the most RTs during the week, for example, were the CDC Twitter Account, the WHO account, as well as that of Brisbane-based virologist Ian M Mackay (@mackayim). The CDC held a #CDCchat  yesterday in which it promises to deliver answers to questions about the disease. The tweet announcing the Twitter chat has got 108 RTs so far, some of which are from HCPs. 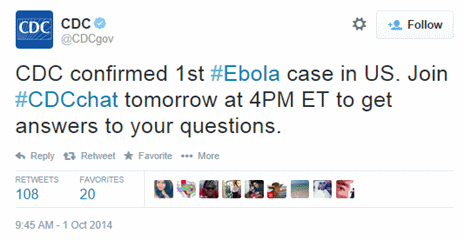 When Ian M Mackay, a virologist based in Australia, shares a spreadsheet charting all fatal outcomes for all known ebola outbreaks, other Twitter users such as American pharmacist C M Doran, share the .jpg version as a resource with their HCP network. 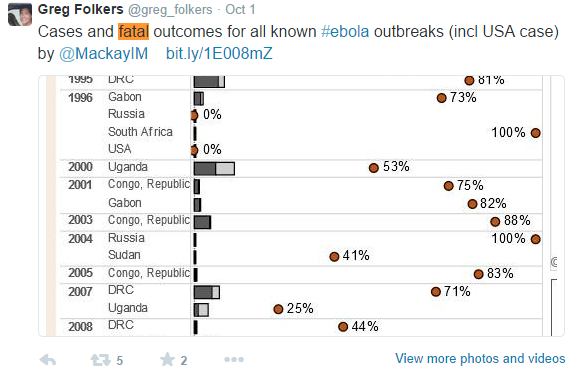 Waiting for the vaccine: Polarity Among Doctors

This week alone, we have seen over 14 000 Ebola related tweets from HCPs worldwide and 2% of the total number of tweets have been connected to news about the much awaited Ebola vaccine, which is currently being developed, albeit at a slower pace than health authorities worldwide would have hoped. In places such as Maryland, an experimental version of the vaccine is already underway, although fears about potential side effects persist.

While the existing formulations of vaccines are being tested as rigorously as possible within the given limited amount of time, we will track what HCPs around the world are saying about the preventative treatment.

300 tweets related to the vaccine have been posted already this week, in several languages and from a multitude of countries. Tweets about the vaccine can be categorised as seen below:

a) Tweets announcing news about the vaccine

This constitutes the majority of tweets related to the vaccine. Below, Italian HCP Claudio Turbino tweets a link to a news piece announcing the imminent rolling out of vaccines within the next few months, as announced by the WHO.

Ngaire Watson, an Australian registered nurse, expresses anxiety about Australia’s level of preparedness against the disease, anticipating that there will not be enough doses of vaccine against it – provided the vaccine works, that is.

Florida based HCP and activist David Kuhn tweets about it being suspicious that a Liberian man was allowed into the US, thus resulting in the possibility of an ebola outbreak erupting in the country. He also highlights the implications of this in terms of big pharma profits. 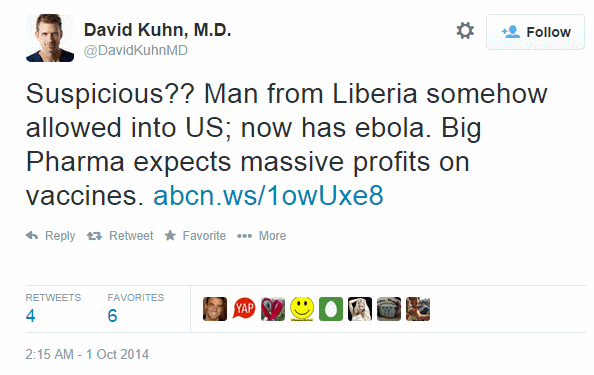 Other HCPs tend to be sceptical about the testing and dissemination of the vaccine, with some HCPs adhering to the claim that the vaccines are being unnecessarily delayed and perhaps even unnecessarily stashed, thus causing further infection due to delays.

US based HCP Andrew Su tweets a link to a chart of projected cases within the current outbreak as a result of delays in intervention. The chart is originally a CDC resource. 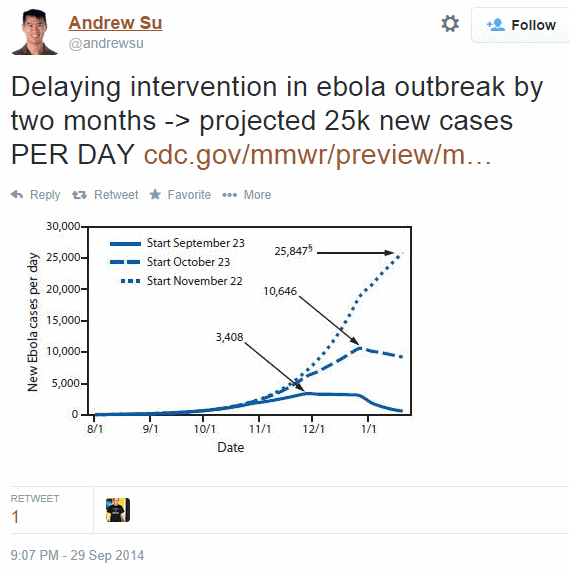 c) Tweets expressing a positive view about the vaccine

In the tweet below, Canadian ophthalmologist Don Smallman acknowledges that if an ebola vaccine were to appear, groups with ‘anti-vaccination’ type convictions might refuse to use it. The tweet is sarcastic, suggesting that it would be outrageous for them to do so, albeit unsurprising. 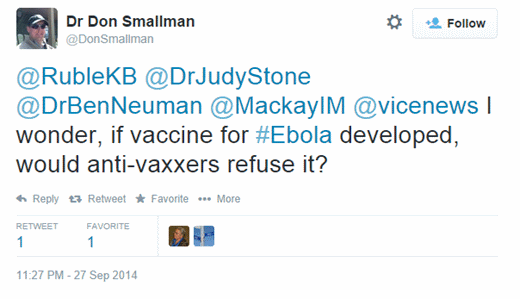 The rhetorical question was posted in response to a link posted by another HCP to an article on youth magazine VICE, in which Dr. Kayla Ruble explains facts about the virus outbreak.

Stay tuned for next week’s piece on the ebola outbreak as we track the evolution of the conversation around this epidemic, including exploring what nurses have to say and what the most frequently talked about preventative measures and treatments are.