I opened my laptop this morning to two very intriguing medical studies, both in the realm of infectious disease, a therapy area that is on the radar for Creation Healthcare, given our recent studies into anti-microbial resistance and the recent outbreak of Ebola.

The first study announced that the HIV drug Truvada was found to reduce the risk of HIV infection by 86%, especially among groups who are particularly at risk. The authors of the study concluded that the drug should be rolled out on the NHS as a potential strategy to reduce infection rates within at-risk communities.

The second study was a piece on Hepatitis-C, also commonly dubbed ‘the silent killer’ due to its ability to remain undetected for years while causing liver damage. While in theory, the medical community now has several cures (novel drugs with minimal side effects) for the infectious condition, the challenge that remains is detecting who is and is not infected and who may unknowingly be living with the disease. There is currently an ongoing pilot project in the UK which aims to detect exactly that.

Faced with such optimistic news, I turned to research methods for new perspectives: what do healthcare professionals around the world think of the news? Below are two key points I found…

For the first time in a Creation Pinpoint study, the volume of conversation coming from healthcare professionals in Spain (38% of all mentions in this case) surpassed the volume coming from those in the United States, which this time came in second with 29% of mentions. The United States has the most digitally active doctors globally so it is interesting to see the balance in volume shift, especially when developments as exciting as the potential cure for Hepatitis C are in discussion.

The rise in volume of conversation coming from Spain-based doctors is due to the Spanish prime minister, Mariano Rajoy’s, recent State of the Nation speech, in which he addresses the topic of hepatitis C and promises to provide treatment to every Spanish citizen currently suffering from it. 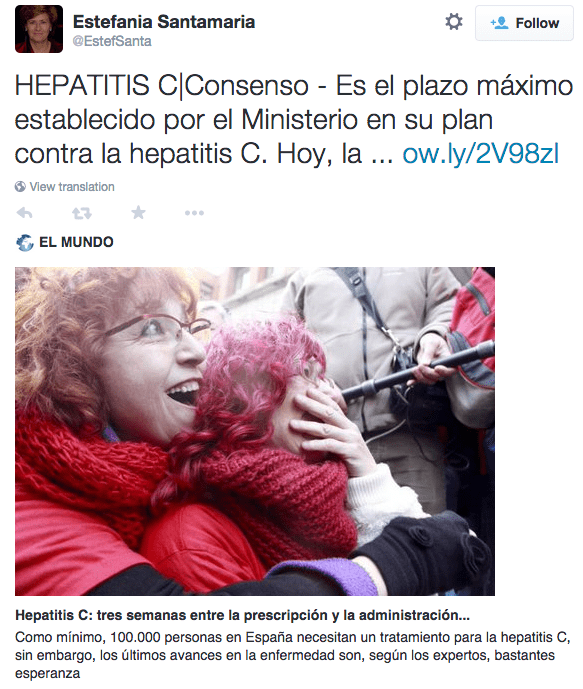 Madrid-based GP Estefania Santamaria tweets about the news, linking to an ‘El Mundo’ newspaper article that announces that procedures will be put in place to ensure that no more than 3 weeks passes between diagnosis of Hepatitis C and the receipt of a prescription for a drug that treats it. It is estimated that approximately 900.000 people in Spain suffer from the disease.

Spanish healthcare professionals were also tweeting about an upcoming ‘Hepatitis C Day’, happening on 5 March this year. On the day, various healthcare institutions and advocacy groups in Spain are planning to get together to discuss the topic of Hepatitis C in an attempt to make patients’ voices heard. 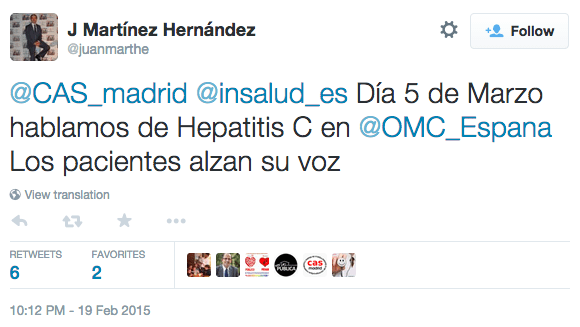 Madrid-based doctor J Martinez Hernandez tweets about the upcoming Hepatitis C Day event on the 5th of March saying ‘patients will have a say’.

Hepatitis C is a space in which plenty of new developments are taking place including newly approved drugs, and as a consequence, we begin to see tweets sharing news about NICE recommending sofosbuvir as a Hepatitis C treatment.

Valencia-based healthcare professional Merxe Melero shares a link to a BMJ article on NICE’s recommendation of sofosbuvir as a Hep-C treatment.

While the news about Truvada’s ability to reduce the risk of HIV infection is hailed as revolutionary by doctors who have tweeted about it, I was surprised to see less than 50 tweets on the topic being posted by healthcare professionals so far today.

A physician based in Africa expresses excitement at the development but then reflects that the study has yet to be peer reviewed.

So far, I suspect that the lack of mentions of Truvada in public social media is due to skepticism, with some negative views around perceived lifestyle implications associated with the drug. Still, the development is a game-changing one. 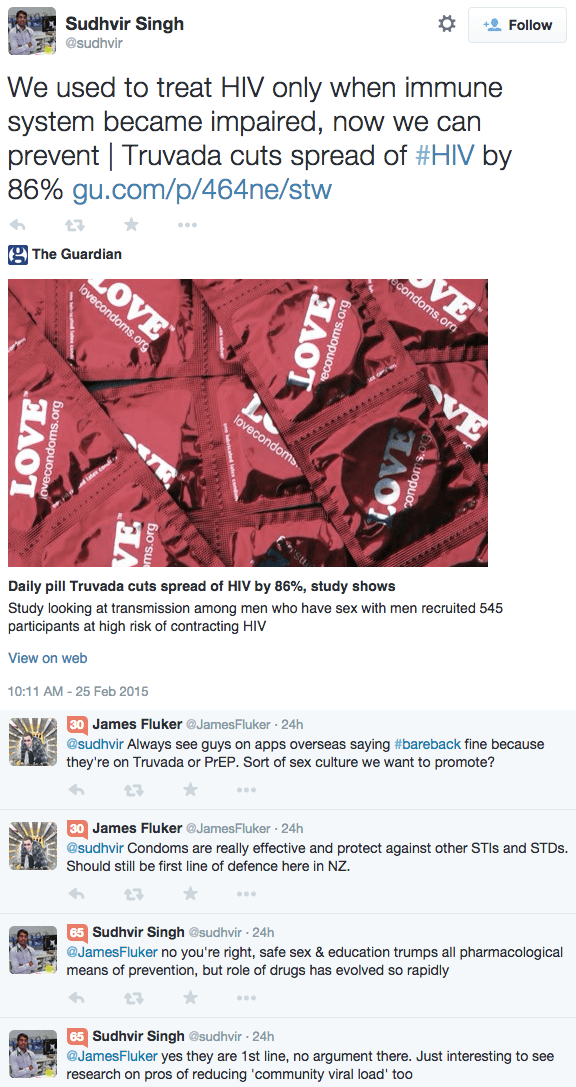 New Zealand-based Sudhvir Singh, a Public Health doctor, tweets a link to a Guardian article that announces the news about Truvada. He is met with responses that are dubious with regards to the drug’s cultural ramifications and the culture of safe/unsafe sex it may promote.

Concerns about availability and cost are also big factors in the Truvada conversation, with many questions from doctors wondering whether the new discovery is financially viable and how high adherence rates will be.

Eric Schrimshaw for example, a psychologist from New York, re-tweets a tweet posted by the publication the Atlantic which maintains that Truvada would not be available to the most vulnerable groups who might be in dire need of it anyway: “RT @TheAtlantic: Truvada, a drug used to protect against HIV, isn’t available to those who are most vulnerable…”

Ibraheem Abioye, a Boston-based research fellow, wonders what good this development would bring to those who are uninsured, and by extension, would need the drug the most.

These key points demonstrate that while a multitude of innovative treatments and treatment programmes are being rolled out in the area of infectious disease, doctors will not hesitate to ask the difficult questions, even when a new study seems to provide undoubtable evidence: Who will pay for this? What about those who need it most? What will adherence rates be like?