More and more healthcare professionals (HCPs) all over the world are moving onto digital platforms to express their views, share knowledge and discuss current events in a candid and unhindered way. Their unprompted online conversations provide insights into the inner workings of the healthcare professional mind, allowing us to discover what they really think and feel.

While HCPs in some countries – such as the USA, UK and Spain – were quick to adopt social media for peer collaboration and learning, others have been slower to embrace public channels. Three years ago, for example, a CREATION colleague wrote about ‘Why Germans Don’t Tweet’ and promised to keep watching the emergence of German HCPs onto public social media.

Today, while German HCPs are still far behind many European counterparts in professional use of public social media, studies with CREATION Pinpoint show that many are now using public channels to collaborate, learn and also to support patients.

To illustrate the point, we used CREATION Pinpoint to take a brief look at the therapy area of breast cancer and reveal who are the top online HCPs discussing the topic in Germany. Globally, breast cancer accounts for the greatest number of cancer cases in women whilst proportionally, Germany has the seventh highest number of women still living five years after a diagnosis of breast cancer.

CREATION uses 7 metrics to identify the top digital opinion leaders in a particular therapy area. Using CREATION’s 7 metrics, the top ranked German HCP on Twitter in the field of breast cancer is Dr. Andreas-Claudius Hoffmann, chief physician in oncology and haematology at HELIOS Clinic Ahrenshoop. During our study period – from January 2015 to December 2016 – Hoffmann boasts a high volume of relevant content (40 mentions of breast cancer on twitter) alongside a very respectable ‘Study Reach’ score (20,498; reach is a measure of the potential viewership of an author’s posts). Hoffmann also takes a keen interest in the development of the cancer drug market mentioning Pfizer’s Metastatic breast cancer drug, Ibrance (palbociclib) five times, each time linking to an article detailing the drug’s progression through the stages towards approval.

A variety of content including an interest in products, matched with an influential offline position make Andreas-Claudius Hoffmann a key figure in this space and Germany’s number 1 HCP Digital Opinion Leader in breast cancer, in our brief analysis. 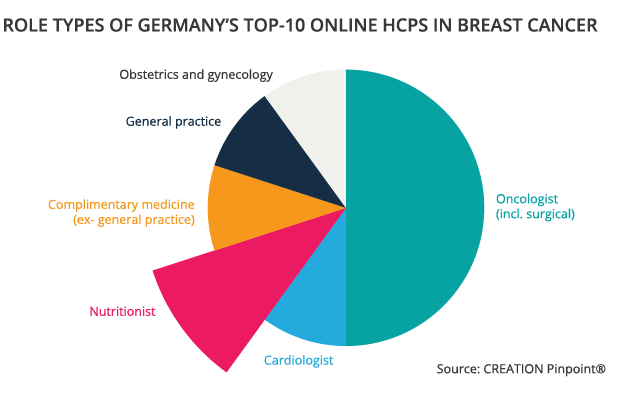 Amongst the top 10 HCPs, different role types are represented, notably oncologists make up 5 of the top 10. However, perhaps more surprising is the appearance of a nutritionist. This is something that is widely seen across therapy areas; role type does not appear to be a barrier to HCPs interacting and integrating online.

Outside of the top 10 HCPs on Twitter, even more medical areas are represented including more from oncology, paediatrics, radiology, dermatology and pharmacy amongst others. A characteristic we have observed in online conversations among HCPs is that the most influential or vocal may not necessarily be in the same role types as those who are the most influential offline. For example, CREATION studies have shown non-traditional role types, such as nutritionists and even students can be influential online.

Amongst these other role types, a primary topic of interest amongst HCPs is the risk factors associated with breast cancer. One HCP, general practitioner Michael Voss, who runs a blog, linked to a YouTube video explaining the link between breast cancer and soy.

In the knowledge that digital opinion leaders (DOLs) may not be in the same role types as key opinion leaders offline (KOLs) it is interesting to observe that the top four German HCPs on Twitter with an interest in breast cancer are all oncologists. Ranking second in the list of top HCPs was Björn Brücher, director and coordinator of the Centre of Gastrointestinal Oncology at Cancer Centre Cottbus and a specialist in surgical oncology.  Brücher is well respected in his field with over 4000 Google Scholar citations of his work. Using his esteemed position, he often uses the online platform of Twitter to share knowledge of the therapy area by linking to useful academic articles.

Dr Atzpodien, who ranked third amongst German HCPs on Twitter with an interest in breast cancer, chooses to maintain a degree of anonymity, a trait that is seen amongst a number of German health care professionals across different platforms. On German forums, for example, such as medical forum OnmedaorWomen’slifestylesiteGofeminin,medical professionals offer advice, often responding to patients’ questions under an alias.Whilst some HCPs in Germany remain cautious in divulging information that might reveal their full identity, there is still so much to be gained from listening to the views and behaviours of online HCPs, even in countries where the data pool is not as rich as markets like Spain or the UK. German HCPs, just like those in other nations, engage in social networking and in this brief study a variety of role types (but particularly oncologists) can be seen sharing developments in the therapy area of breast cancer and engaging in issues such as risk and the progression of new treatments.

Read about consultant endocrinologist Partha Kar here to discover what an HCP DOL looks like in a different therapy area.