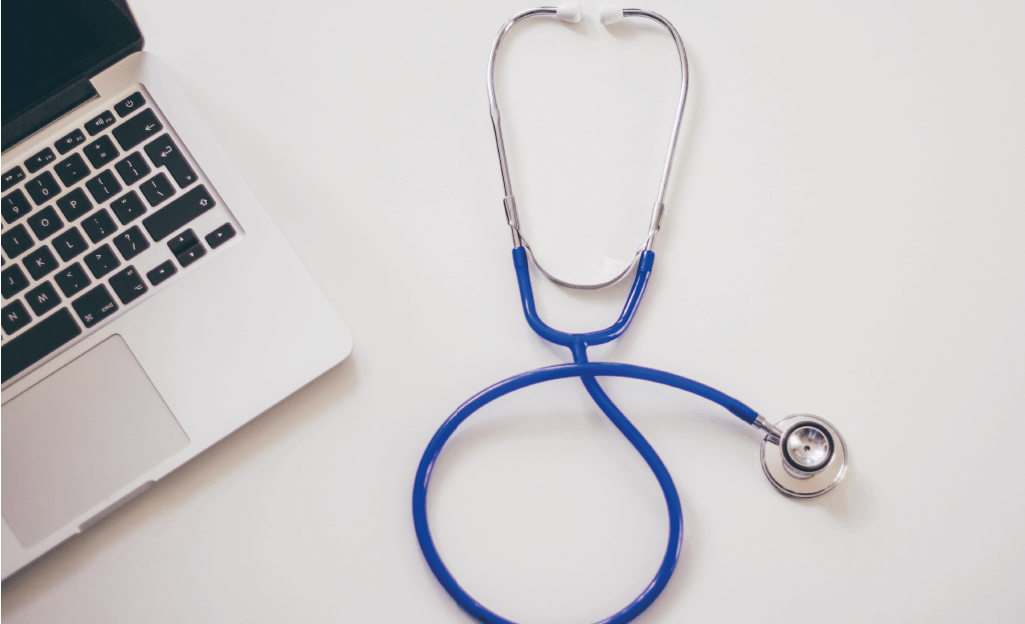 I presented some of CREATION’s latest research on UK healthcare professionals’ use of social media, at the King’s Fund Digital Health and Care Congress. I greatly admire the King’s Fund’s work and research to inform UK health policy, so it’s a privilege to take part in this year’s congress. The event is sold out, so if you missed the opportunity to be there, here’s an outline of what I presented.

We conducted a study of healthcare professionals in the UK, to see what we could learn from their interaction and online behaviours. I was especially interested to explore developing trends in their interaction with patients and to discover how healthcare systems can be improved through HCPs’ use of social media.

For our study data, we used a selection of 7,400 UK HCP profiles from our Creation Pinpoint platform, who had been using Twitter since at least the end of 2013 – well established online HCPs (many of these are using other platforms too – we’ll come to that – but Twitter allows us to analyse particularly useful public data on behaviours). The simple animation below illustrates how and where the number of HCPs in the UK and Ireland using Twitter grew between 2008 and 2013.

A virtual network of UK HCPs

One way to understand how Twitter connects together HCPs in the UK is to consider the virtual network that exists through their following each other. The illustration below represents the most ‘connected’ of the 7,400 UK HCPs we analysed, displayed according to their ‘network centrality’: HCPs are weighted according to the significance of connections with their peers, with greater weight given to those who are followed by HCPs who in turn are also followed by HCPs. 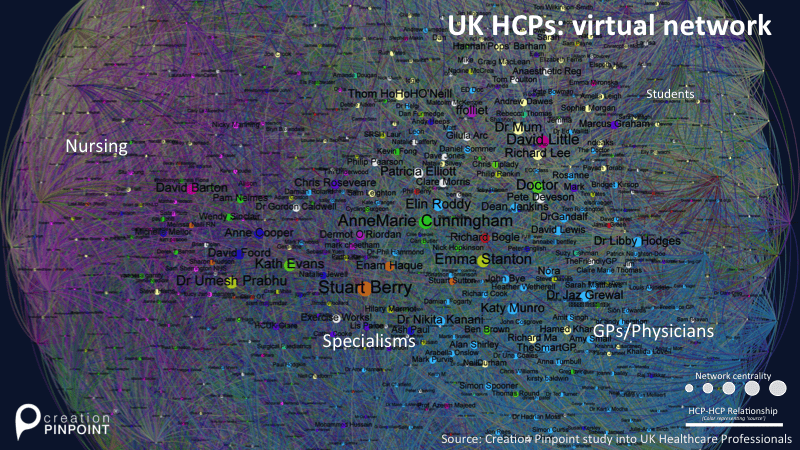 The virtual network illustration also shows how certain kinds of HCP roles ‘cluster’ together online, with nurses (represented by the purple dots and lines) on the left-hand side of the network; GPs and other physicians connecting together; and also students, who we included in the study since they engage actively with qualified healthcare professionals.

A worldwide network of connected HCPs 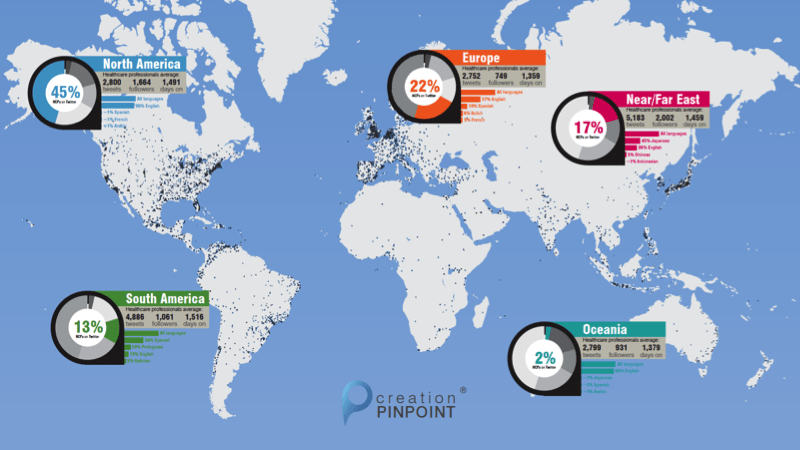 The UK study uses a focused subset of data from an earlier worldwide study of healthcare professionals on Twitter that my colleague Paul Grant presented at Stanford MedicineX Conference last year. In the illustration above, which plots around 90,000 HCP Twitter profiles worldwide, we see how the UK HCPs in the study form part just one part of a massive group of peers online. This provides UK HCPs with the opportunity to collaborate in real time with peers almost anywhere in the world.

When we analysed UK HCPs by their peer followings, we saw a range of online behaviours. The map below shows some of the UK HCPs who are most followed by other HCPs (larger dots indicate a greater number of HCP followers; coloured lines indicate following behaviour). In the table, we see the top-ten of these, based on number of HCP followers. While two of these – Ben Goldacre and Christian Jessen – are among the HCPs most-followed by other HCPs, they also have huge public followings of several hundred thousand followers, so overall thepercentage of their followers who are HCPs is very low.

For others, like Dr Helgi, Anne-Marie Cunningham, or Trisha Greenhalgh, a high percentage of their followers are HCPs. 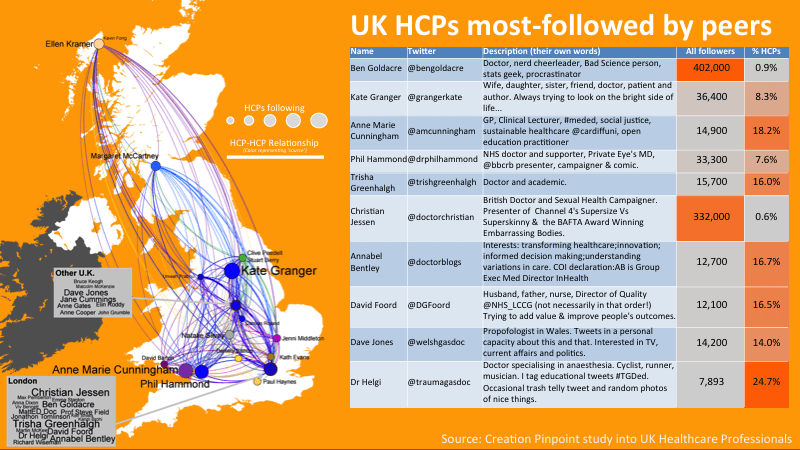 It is interesting to note the diverse range of role types among HCPs in our study. The ‘word cloud’ illustration below shows the role types of HCPs weighted by the average number of HCP followers for that role. Among the role types most followed by peers are various kinds of specialists, surgeons, and nurses. 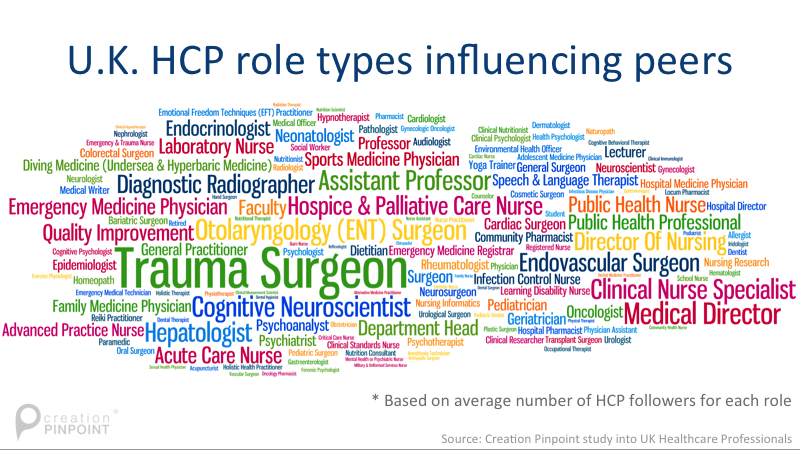 While we see many diverse roles connecting together – and in fact the flattening of hierarchies among HCPs is a phenomenon seen in some of our other studies into HCP online behaviours – we also see like-minded ‘virtual network’ communities by role. Looking at UK pharmacists connected via Twitter, for example, we see significant peer following. The illustration below shows some of the most connected UK pharmacists on Twitter, including a pharmacist who tweets under the name of ‘Mr Dispenser‘, and Joanne Fitzpatrick (a former Pharmacy Manager and now Head of Medicines Optimisation for Wakefield CCG). 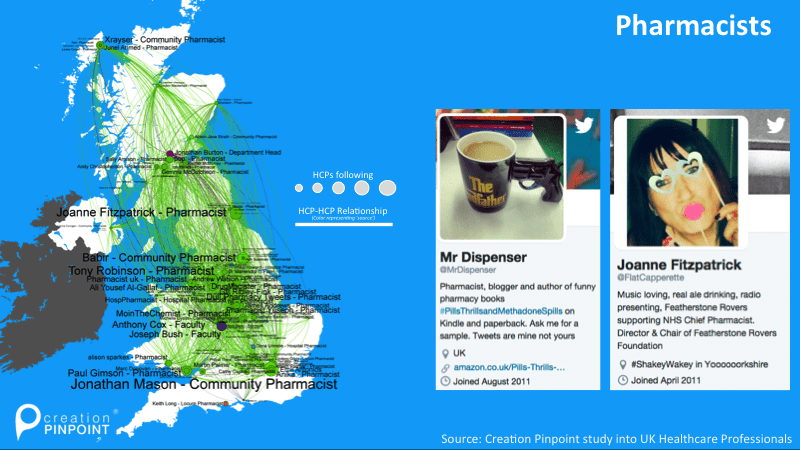 So what does the ‘social doctor’ – the doctor who engages with other health stakeholders via social media – do online? Many are using a range of social media platforms to share and connect – Twitter is one example, where short-form posts, comments and conversations take place. Some use blogs to share longer-form, often more qualitative posts; some engage in groups on Google Plus, or use LinkedIn to connect with professional contacts. Many use Facebook, although we see this platform used less frequently for professional updates among UK HCPs. And many are members of dedicated HCP communities including doc2doc, the BMJ’s HCP platform which includes both open (publicly-visible) and closed (member-only) discussion forums.

What do they talk about?

All this online engagement is allowing UK HCPs to exchange ideas that are shaping their own learning and touching health policy. The following are some of my favourite examples from recent HCP online conversations.

When the New England Journal of Medicine published an article on glycemic control and cardiovascular outcomes in type 2 diabetes patients, Ash Paul, a UK public health doctor Tweeted to NICE, the UK health care policymaking body, sparking an active discussion among other healthcare professionals about mortality and public health budgets. 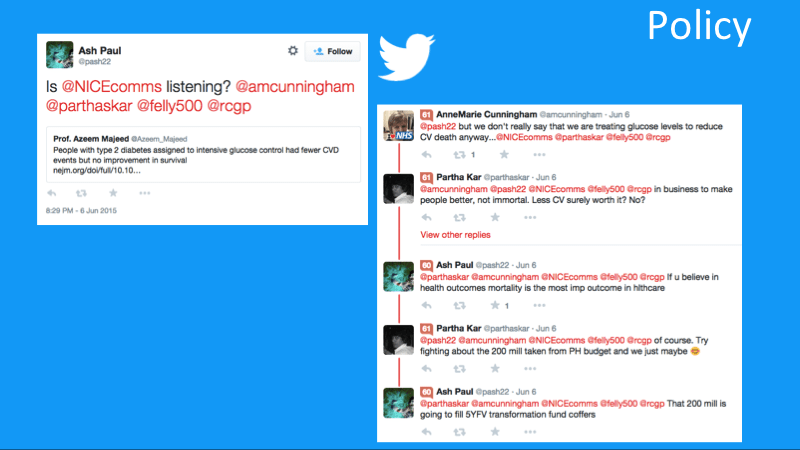 Earlier this year, when NICE issued draft guidelines for the treatment of type 2 diabetes, endocrinologist Partha Kar started a discussion among UK HCPs concerned that patient care would suffer. 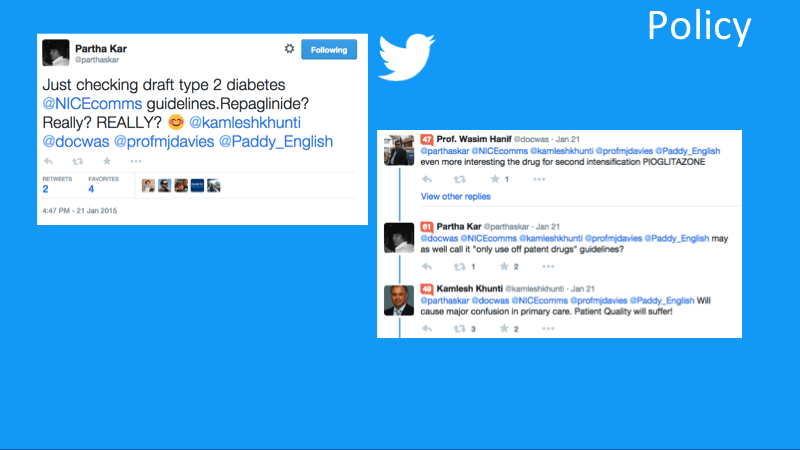 When we interviewed a number of UK HCPs recently about how and why they use social media, we heard countless recent examples of its benefits. Philip Gardiner, a Rheumatologist based in Northern Ireland, told us about a recent experience asking for advice from peers online.

“A few weeks ago a respiratory physician asked me about a patient on biologic drugs who had died due to a type of infection (PJ Pneumonia) linked with immune suppressive drugs”, he said. “Without mentioning details, I sent a tweet asking for opinions about routine prophylaxis for our patients on biologic drugs. Within a few minutes I had a reply from an expert in Norway who had published a paper on that very subject and from another colleague in England who is an international expert in Lupus. After the conversation I prepared a summary of our 20 minute impromptu chat on Storify so that I could discuss it with my colleagues at our next Morbidity and Mortality meeting.” 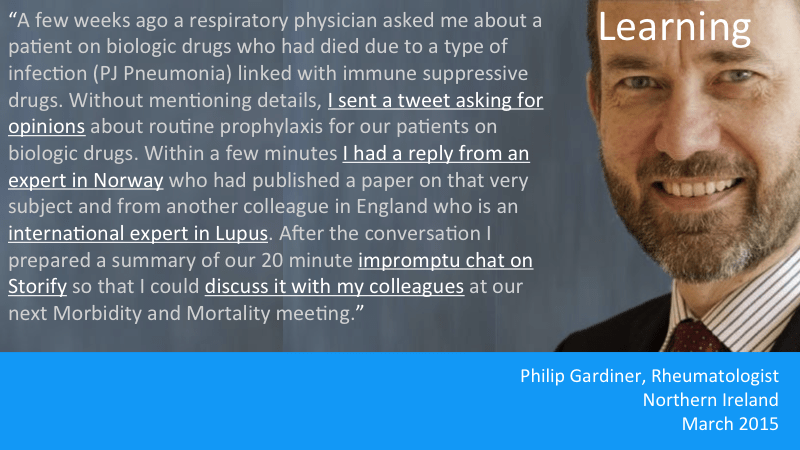 Philip Gardiner talks about learning from peers on Twitter

While most HCPs on social media actively engage their peers in conversation, there are some who have frequent conversations with patients and the public, covering personal clinical questions and public health matters. One such HCP is Dr Christian Jessen, doctor and presenter of popular UK TV shows Supersize Vs Superskinny and Embarrasing Bodies. In a recent example he responded to a tweet asking about MMR vaccination. 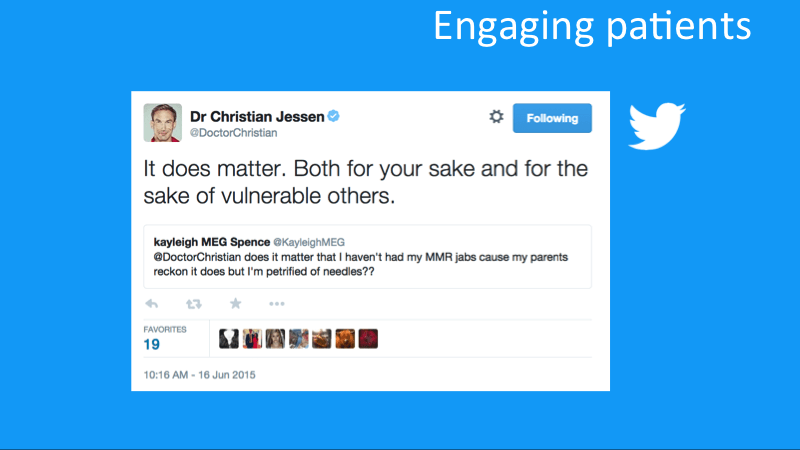 Dr Christian Jessen responds to a question about MMR vaccination

Insights on being a patient

A powerful phenomenon we have observed among HCPs in social media is when they share their personal experience as a patient. Anne Cooper, a nurse who lives with type 1 diabetes and runs a moving personal blog which she describes as “the thoughts of a nurse with type 1 diabetes“, recently tweeted about the challenges of trying to change the health care system from inside, as a nurse. “Be PWD [person with diabetes] first who happens to work in NHS not a nurse who happens to be PWD”, she concluded. 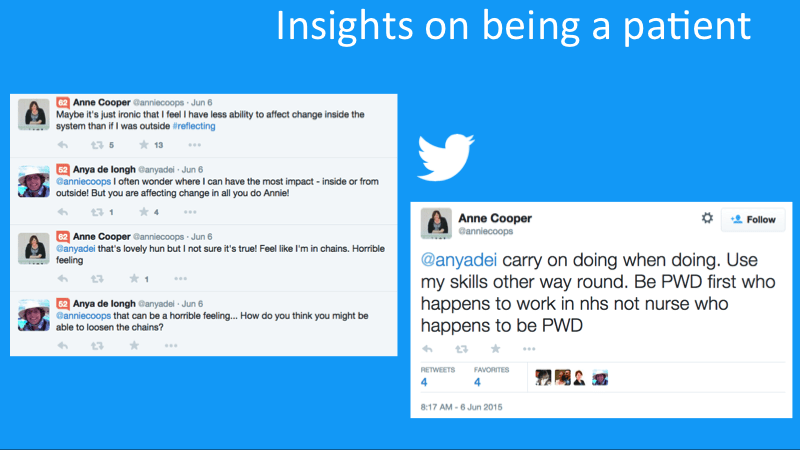 When Partha Kar recently asked HCPs how much they knew about types of diabetes, Jo Farrow, an Acute Inpatient Consultant Psychiatrist, responded that she only understood the complexities of type 1 diabetes through her own experience caring for a child diagnosed with the disease. 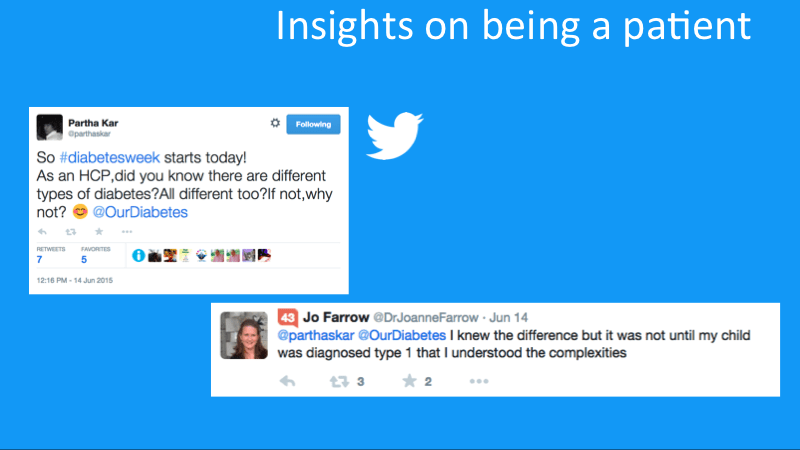 Another HCP who has shared her experience of being a patient is Kate Granger, a doctor who was diagnosed with terminal cancer. My presentation at King’s Fund ends with a tweet Dr Granger posted just earlier today as she plans her return to work, pointing out how much it matters that her GP made her feel he cares about her as a person. Through her campaign, #hellomynameis, Kate has arguably done more than any patient or doctor in recent years to stimulate constructive conversations about compassion in the UK health care system. Social media has helped the campaign spread far and wide, with inspiring stories of the effects of changed behaviours touching patients and caregivers. 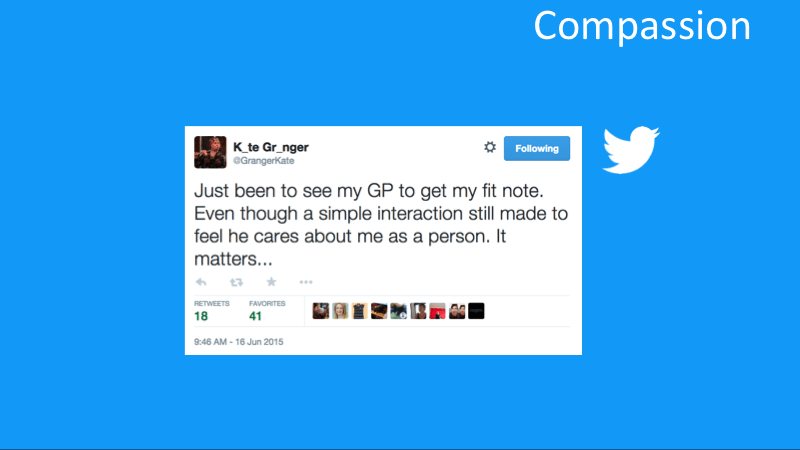 In our study we saw examples of HCPs responding with compassion to patients via social media, and it is perhaps in this area that social media offers one of the greatest untapped opportunities for doctors and health systems. While HCPs are understandably wary of giving health advice to patients online, in the unique environment provided by social media, where public – and yet often very personal – engagement takes place, compassion may prove to be the most effective kind of HCP-patient interaction.