Last week, we reported on the Ebola crisis by analysing conversations taking place between healthcare professionals (HCPs) globally, uncovering some of the key issues that were of interest to doctors worldwide in the process. One week on, with a Texas-based Ebola sufferer passing away recently, and another case of the virus being discovered in Spain, healthcare professionals’ conversations in the US and Europe have turned to domestic healthcare systems. Meanwhile, the virus rages on in severely affected countries in West Africa (a combined number of 3400 people have already died after contracting the virus in the 3 most affected countries – Sierra Leone, Liberia, and Guinea).

The World Bank recently denounced the general failure to contain the virus, warning that in the long run, the economies of West African countries will be critically affected by the crisis. While public conversation tends to revolve around misconceptions around how the virus is contracted and trying to educate the public about the virus, there is also an ongoing discussion touching on why such major structural weaknesses in national health systems were not identified in good time for the outbreak to be prevented in a more effective way.

What does the above say about disease patterns and how the medical world has handled the outbreak so far? Within the dynamic of epidemics, there will always be two perspectives: the biomedical one, and the population’s view. While learning from conversations HCPs are having online is highly useful in establishing some of the key issues plaguing global healthcare, we recognised that they often also offer insights into additional dimensions. We often see HCPs post entries and tweets linking what is happening in healthcare with an understanding of what drives patient behaviour, from fear of epidemics to misinformation to cultural perceptions of disease.

In our ongoing quest to identify issues from a HCP perspective and do so in an educational way that can contribute to the public conversation, we look at global HCP conversations to get a sense of doctors’ views on recent developments.

Worries about risk to hospital staff

As news of Spanish nurse Teresa Romero Ramos contracting the infection was broken, ‘hospital staff and carers’ became the issue most discussed by HCPs. Mentions discussing the issue of staff and nurses being at extremely high risk of infection made up more than 7% of the total discussion volume since last Friday.

Below, US-based HCP Paul Tatum tweets about the miscommunication between doctors and nurses in the case of the Dallas patient who died from the disease, stating that the doctor who treated him was not aware that he had been in Africa.

In another tweet about miscommunications that occur at different points of care, Washington DC-based gynaecologist Jeff Andrews states that it is wrong to blame the patient and their electronic record for incidents in which Ebola patients have been wrongly turned away. Instead, he says, a doctor’s duty is to develop a differential diagnosis by taking the patient’s complete history. 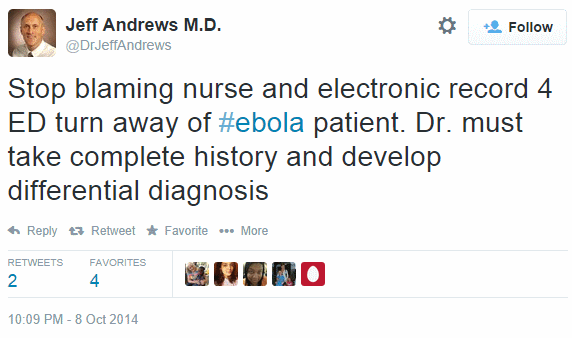 The conversation continues when another Twitter user asks Jeff why doctors don’t read nurses’ notes after making the differential diagnosis, to which he replies that such an occurrence is quite rare, referring to the process as ‘lousy workflow’. 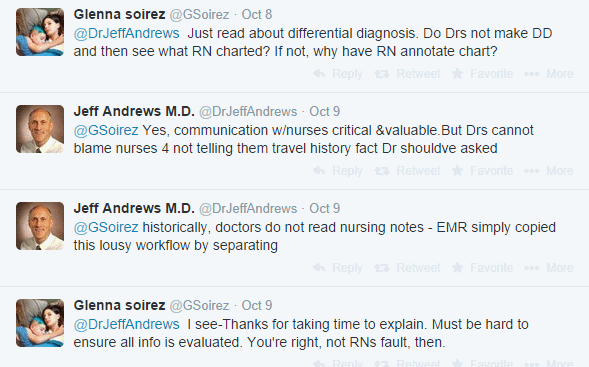 In the light of recent tragic events linked to the Ebola epidemic, it is somewhat encouraging to see that the developments have at least prompted useful discussions and re-evaluations of the efficiency of clinical workflow in different countries. One such discussion happened on Thursday, the 9th of October, when registered nurse Andrew Lopez (@nursefriendly) started a healthcare tweet chat about the outbreak using the hashtag #mhstigma.

Although #mhstigma is a regular healthcare chat that routinely addresses mental health problems and issues and their stigmatisation, it seems that HCP peers who usually take part in the discussion felt the need to address Ebola concerns in a real-time manner, and thus announced the event would take place by posting it on Facebook, with 4 questions to be answered by the end of the chat.

No time for political rhetoric

Issues articulated in the chat bear many similarities with some of the problems articulated by doctors last week, from overpowering media coverage to so-called experts disseminating misinformation. There were also concerns that the socio-economic aspect of the outbreak and speculation from that perspective was replacing what should be a series of more prompt actions to contain and control the virus.

Below, an example tweet from healthcare analyst Matthew Loxton receives quite a few replies in agreement with the condemnation of too much political rhetoric taking the place of prompt clinical action. 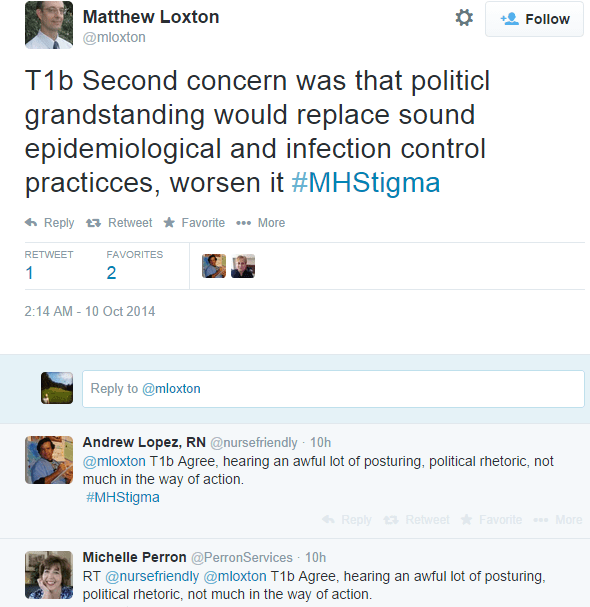 Lastly, it is interesting to note how topics vary across continents, with the graph below showing that there is more discussion around vaccines and prevention in Europe, USA and Canada.

In North America, cost of Ebola is a concern

In the US and Canada, the number of tweets related to the economic cost of preventing the spread of the outbreak has also gone up, with more than 100 mentions this week. Below, a Washington DC based bacteriologist tweets about the cost of dealing with Ebola, stating that she knows resources are not unlimited.

On the whole, this week has seen significantly more posts and tweets from HCPs around the globe, some of them decrying the frenzy created by irresponsible media coverage, which they thought contributes to further misinformation through the creation of a general state of panic. The general consensus in public discussion seems to be that the steps taken so far have not done enough to alleviate existing cases or prevent further infections in an effective way. Whether this is because the extent of the outbreak was underestimated before it spread to other continents is unknown. Watch this space for more updates on next week’s conversation around Ebola and how doctors’ concerns evolve and adapt to changing clinical conditions.