During 2014, at client meetings and in presentations at congresses throughout the United States, we have been struck by the richness and quality of insights that can be gleaned by simply observing and analyzing the conversations of healthcare professionals (HCPs) in public social media.

It was as early as 2012 when Creation Healthcare began seeking out and analyzing distilled HCP conversation; before that our analyst team had been using many of the generic commercially available social media listening tools to undertake broader public therapy analysis. Such studies revealed insights that informed some of the most effective healthcare engagement strategies that we have seen in recent times. Yet it is in this present time, that we are seeing the beginning of a pharmaceutical revolution in stakeholder communication and engagement.

“…we are seeing the beginning of a pharmaceutical revolution in stakeholder communication and engagement.”

The pharmaceutical industry expressed a need and requested that Creation Healthcare provide an even more focused view of the Internet than that from off-the-shelf social media listening platforms, where it might be possible to examine only the conversations of HCPs – without the voice of patients, media, stock markets and industry pundits. So we built Creation Pinpoint, the world’s first and largest market research tool for studying the opinions of healthcare professionals in public social media.

As we come to the close of 2014 we thought it a good idea to provide an update on what we have found so far.

The importance of the United States market for HCP insights

The United States is such a pivotal market for global pharmaceutical companies; fortunately more than more than 45% of all healthcare professionals in Creation Pinpoint who are using Twitter for social networking and clinical conversation are predominantly based in North America.

Where their specific location can be determined through public channels, their population concentration correlates with the general population density of the United States and Canada by geography (see Figure 1). 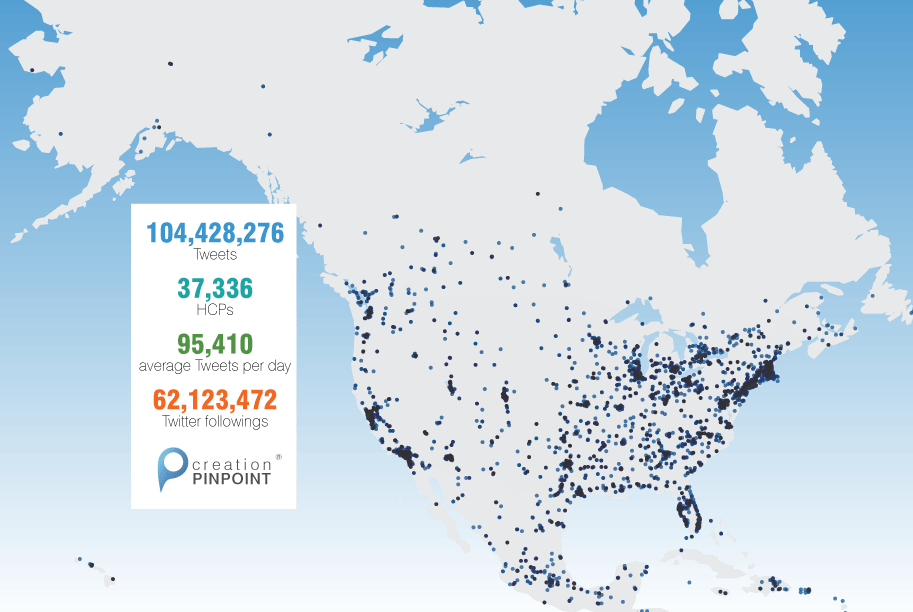 However these are not all one type of healthcare professional. In our analysis for Stanford Medicine X there were no fewer than 315 different types of HCP using Twitter in the United States alone!

Here are some other interesting statistics about HCPs using Twitter in the United States:

While these high-level observations give an overall sense of the cohort, it is only when looking at a particular topic such as a therapy area or drug class that we start to see insights from which recommendations can be developed. For client confidentiality we do not share insights from actual production projects, so we created a public report into diabetes to give a sense of the types of data outputs that are possible from HCP insights studies.

The Diabetes study was a global investigation on the roles, interests, and relationships of healthcare professionals. However, when we focus in on data from the U.S. alone, we found there is a very different picture to the global view.

For instance, most vocal by volume are one particular Psychotherapist who discloses that he is living with Type I, Elliot Le Bow (@DiabeticTalks). During the study period he has shared 23,900 Tweets that relate directly to diabetes; that’s an average of approximately 65 tweets per day! 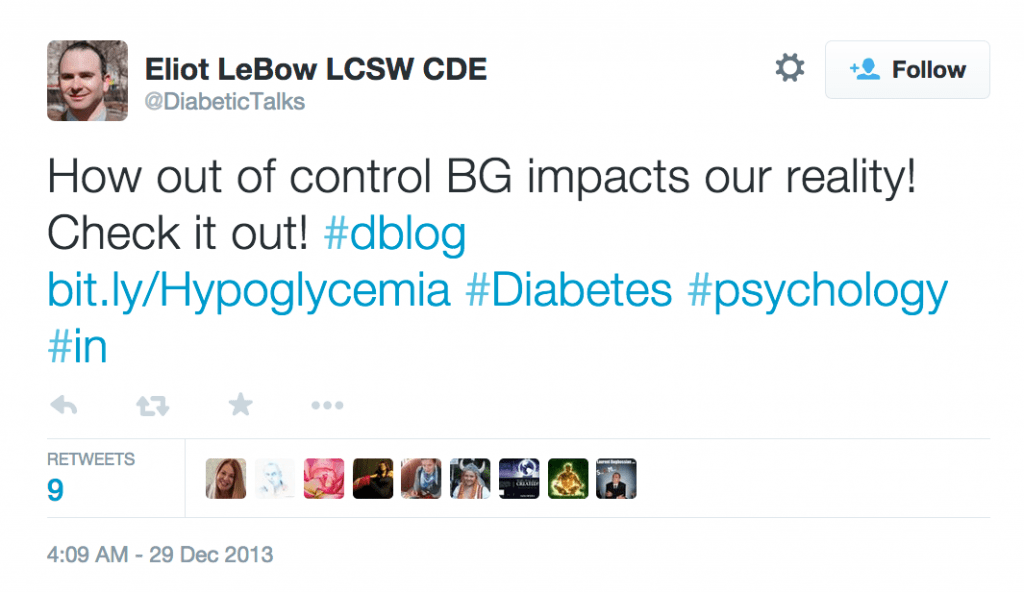 Even though there were also a little more than 1,000 tweets contributed by other Pyschotherapists, this group is disproportionately high due to Elliot’s content alone.

Next in line (by volume) are Dieticians and Nutritionists. These professions are more noticeable talking about diabetes on Twitter in the United States, compared to other countries around the world – perhaps reflecting an approach to the treatment of obesity around eating, the sugar and salt content in Western diets, and issues around sedentary lifestyles. Some of the notable contributors are also TV celebrities, which accounts for both their promotional use of Twitter and the numbers of people who follow their updates. 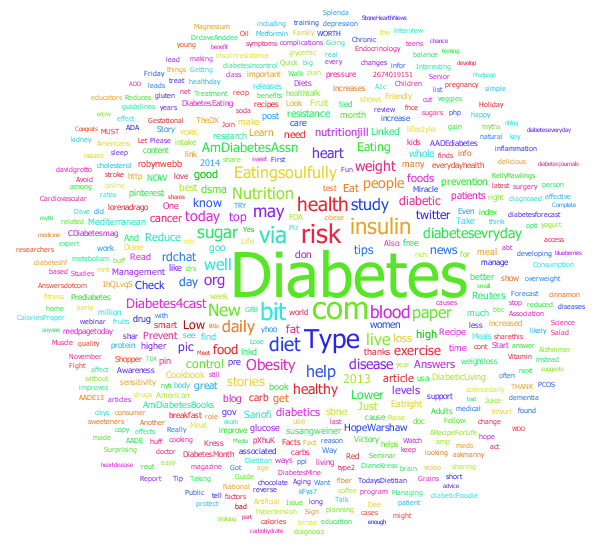 Figure 3 – A word cloud (size indicates number of mentions) of ‘lifestyle’ words relating to Diabetes, as expressed by U.S. Dieticians and Nutritionists

The data starts to become truly fascinating when we start to view the content from physicians, nurses, endocrinologists, pharmacists, and the various other role types who prescribe or administer pharmaceutical or biosimilar treatments. They express opinions, share advice, recommend approaches, and generally take a keen interest in developing the clinical conversation around best practice. Each role has particular passions, and areas of focus, yet they all overlap and connect where there is common ground.

HCP role types over time, showing differing peaks and troughs in interest throughout a 12 month period

This is the amazing opportunity for discovering new insights about how healthcare professionals really feel about issues affecting them in their role. For the pharmaceutical or life sciences company, such conversations are now informing the engagement strategies of companies in the United States.