When it was announced that Gilead’s Hepatitis C drug Sovaldi would be priced at approximately $84,000 per patient in the US, the news sparked inflammatory debates on the topic of feasibility and ethical considerations of drug pricing.

While the balance of opinions around the topics oscillates from various groups seeking methods of making pricing more sustainable to drug manufacturers justifying their pricing by highlighting excessive costs associated with the processes of R&D and drug approval, healthcare professionals in the US are taking action by campaigning against escalating drug prices.

In May 2014, the US National Coalition for Healthcare initiated the Campaign for Sustainable Rx Pricing, also known as ‘CSRxP’. The initiative is supported by a wide range of stakeholders comprised of organisations such as the and the Association of American Health Colleges, among others. Another example of a similar campaign was the #MakeHealthPrimary, whose objective is to make care as patient-centred and prevention-focused as possible.

In order to make sense of what issues in this arena matter most to US physicians, a study analysed over 1,000 tweets among healthcare professionals in the US on the topic of drug pricing and payments. The study was conducted using Creation Pinpoint, a service that analyses healthcare professional conversations on public social media to inform healthcare strategy. 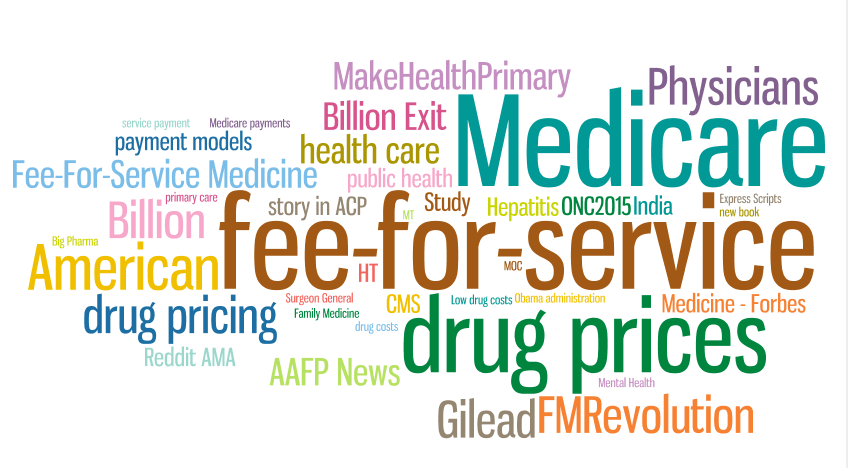 A high-level overview of the most frequently mentioned pricing and payment model related topics among US healthcare professionals.

By far the most prevalent topic identified during the course of the study was America’s move away from its current healthcare model and towards a more efficient and outcome-focused health infrastructure. Topics were ranked according to mention volume and Twitter user interaction with said tweets.

The Shift from FFS (Fee-for-Service) to Value-Based Payments

15% of discussions among healthcare professionals to do with drug pricing and payments in the US healthcare system mentioned the US’ ‘exit’ from what is called the ‘fee-for-service’ payment model, which is seen as incentivising doctors to focus on the quantity rather than the quality of treatment.

The United States Department of Health and Human services has to focus on performance rather than volume of treatment carried out. This will be achieved by introducing alternative payment models and objectives that are aligned with measurement of parameters that indicate health outcomes.

The news was welcomed by the majority of American healthcare professionals, although a small percentage were skeptical about the transition. Kansas-based physician Pam Harris tweets a response to a peer, stating: “…Fee for service medicine incentives promote more (unnecessary) transitions, more tech/procedures and later referral to HPM.”

Diane E. Meier, Professor of Geriatrics and Palliative Medicine, shares a link to a New York Times article and tweets: “Industry Group to Back Results-Focused Care… Fee for service party is over, CMS+major health systems agree…” 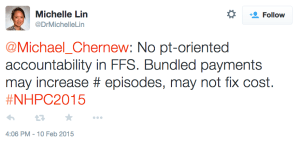 The secondary discussion around the fee-for-service model focuses on the ratio of fee-for-service care to alternative model care. While the former is losing ground under Obamacare reforms, doctors are sharing opinions around predictions related to how swiftly the transition will be made. 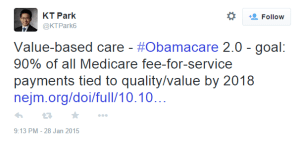 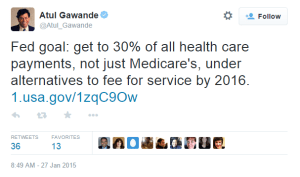 It is notable that tweets that express changes in the healthcare landscape through numbers – whether as percentages or projected budgets – are popular, perhaps because they appear to be are easy to digest, informative, and give tangible credibility to a concept such as healthcare reform.

Medicare Payment Models and Concerns about Shift from Fee-For-Service

Some physicians were quick to point out potential issues to do with the radical shift from fee-for-service, advising against pre-emptively assuming that the new model will curb healthcare costs. Birju Patel, a Georgia-based geriatrician, re-tweets a link to a Chicago Tribute article on ‘The cost-cutting power of medicare’: “…Medicare’s plan to phase out fee-for-service model won’t be enough to bend healthcare cost curve…”

Shedding light on an another concern, Andy K. Moriarity, a California-based imaging doctor, addresses a question about what alternative payment models mean for radiology in his tweet linked to an article on commoditization of radiologists. “Not for those embracing #imaging3 in their practice! – Does the ACO Model Commoditize Radiologists?…”

When internist and epidemiologist Zachary Berger tweets a link to a medical journal study about referrals in accountable care organisations, he receives a reply from MD Geeta Nayyar on the importance of transparently studying referral patterns during the transition to ensure efficiency and transparency.

As changes to Medicare infrastructure are being introduced, physicians across the US are already responding to projections and plans to change the current system to a more patient focused one that delivers real health outcomes. Similarly, as the ACO (accountable care organisation) model is piloted on different scales in different regions, doctors’ reactions and thoughts to the implemented changes as they learn from these experiments can provide valuable insights into what is, or is not, working.