Vaccine pricing in the poorest countries: can profit and helping the poor co-exist?

Over the past few weeks, pressure has been placed on pharmaceutical companies to reduce the cost of vaccines for the poorest countries. Médecins Sans Frontières (MSF)‎, the medical humanitarian organization, released a statement on January 20th calling GSK and Pfizer – the only makers of the pneumococcal (PCV) vaccine – to reduce the price of the vaccine to $5 per child. MSF’s claim is that poor countries struggle with what it calls “skyrocketing vaccine prices.”

The statement from MSF came days before Gavi, the global vaccine alliance between public and private sector organizations – whose members include the World Health Organization, UNICEF, The World Bank, and the Bill & Melinda Gates Foundation – met for a pledging conference. The conference, hosted in Berlin by German Chancellor Angela Merkel, aimed to commit US$ 7.5 billion over five years to support vaccination in the world’s 73 poorest countries.

MSF worked hard to bring an important debate into the public eye, supporting its statement with a campaign in which staff posted widely via social media and wrote for publications ranging from Huffington Post to mainstream traditional media. Outside the Gavi meeting on January 27th, MSF staged a protest featuring a giant “Pharma Wheel of Fortune”. “Whichever way you spin it, pharma always wins…”, tweeted MSF. 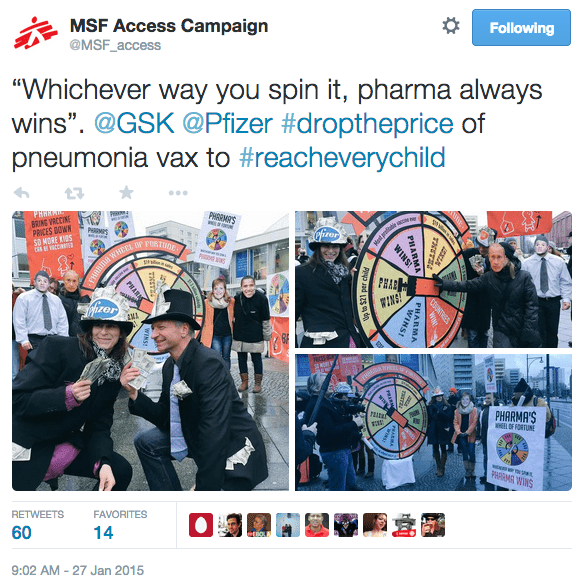 MSF tweets images from its protest outside the Gavi conference

Anecdotal evidence suggests that MSF’s campaign was damaging for the reputation of the pharmaceutical companies involved.

“A GSK pharmaceutical rep came into my pharmacy yesterday and asked me to promote her products”, posted a pharmacist in Canada on an MSF Facebook post. “I said I wouldn’t suggest her vaccines to people until GSK lowers their price of vaccines in developing nations. She had no clue what I was talking about.”

“Even me the same I said I wouldn’t until GSK lowers their price of vaccines [sic]”, responded another Facebook user in the USA.

And who could argue with MSF? The organization is respected the world over for its incredible humanitarian work among the world’s victims of health crises. Its staff and volunteers are at the front line in medical disasters all over the world;often putting their own lives at risk.

Yet not everybody did agree with MSF’s perspective. First to step in to the discussion was Chief Executive of GSK, Sir Andrew Witty. In a UK interview with BBC Radio 4 Today on January 23rd, he responded to the challenge, defending the company’s pricing of vaccines to the poorest countries.

“Of the 870 million vaccine doses we make, 70% go to the poorest countries in the world, essentially at break-even prices”, he said. “Our polio vaccine costs thirteen cents per dose”.

“We sell them at the lowest pricing we can, and where we can reduce costs of production we will”, said Witty, going on to talk about GSK’s commitment to

research in areas where there is not likely to be a substantial commercial return. He cited malaria as an example, where he said GSK had invested for over 30 years to develop the world’s first potential vaccine. In fact, Witty said, GSK were the original inventors of eleven of the world’s key vaccines.

MSF’s statement of January 20th included a claim that “in the poorest countries, the price to vaccinate a child is now 68 times more expensive than it was in 2001”.

“That’s a completely misleading statistic”, said Witty, adding that the cost of some vaccines have in fact gone down but that the process of fully vaccinating a child now includes many more vaccines than it did on 2001: “The reason why the cost of vaccination has gone up is not price, it’s because the good news is, there are more vaccines available… and children are being vaccinated against more disease.”

Challenged to reduce the price of GSK’s PCV vaccine to $5 per child for three doses, Witty explained the commercial perspective. “That vaccine itself we supply at around $3.40 per dose. For us to get to the price which was cited, which frankly is a number picked out of the air, the shareholders would no longer support that kind of activity. So we have to clearly balance it.”

In making this point, Witty touched on a key question in the vaccine pricing debate: is it reasonable for a commercial company to make a profit while at the same time addressing the needs of the poor?

This important question was addressed by Bill Gates, who added his perspective to the growing debate in an interview with The Guardian Newspaper on January 27th.

In the interview, Gates criticised the calls for a reduction in vaccine pricing, saying “I think there is an organisation that’s wonderful in every other respect, but every time we raise money to save poor children’s lives, they put out a press release that says the price of these things should be zero. Every five years when we are raising billions – that is the most effective foreign aid ever given, that saves millions of lives.”

Gates pointed out that it is only those pharmaceutical companies who have invested in products to help poor countries that are criticised for their pricing of these products: “This general thing where organisations come out and say, ‘hey, why don’t vaccines cost zero?’ – all that does is that you have some pharma companies that choose never to do medicines for poor countries because they know that this always just becomes a source of criticism. So they don’t do any R&D [research and development] on any product that would help poor countries. Then they’re not criticised at all because they don’t have anything that these people are saying they should price at zero.”

Given Gates’ significant role supporting health in the world’s poorest countries (at the Gavi conference the Bill & Melinda Gates Foundation pledged $1.5bn to Gavi in January, matching the pledge made by the UK and almost double that of the United States), one might think he would side with the call for vaccine price reduction.

Yet Gates’ perspective is perhaps a little more pragmatic, finding balance between making profit and helping the poor. Recently named America’s richest man, having made his wealth in commercial business, he is perhaps as well known now for his philanthropic work as his commercial success and is reported to have donated $28bn to his foundation to enhance healthcare and reduce extreme poverty. So it could be said that he is an authority on the role of commercial business in supporting the poor.

In summary, here’s my snapshot of the current position taken by MSF, Witty and Gates in the debate.

The debate rolls on: Kate Elder, Vaccines Policy Advisor at MSF Access Campaign responded to Gates’ claim in a letter to the Guardian on February 1st, pointing out that MSF had not called for vaccines to be free of charge.

It is an important debate that must continue, and I applaud MSF’s work in bringing the key issue of vaccine pricing into public awareness. For now, I’ll leave the last words to the Gavi alliance, who responded in 2013 to earlier MSF statements about vaccine pricing by focusing on the common goal:

“First, we agree with MSF – we do all want the same things. We want all children everywhere to be protected by immunisation.”

Please do share your views by posting comments below.