With the recent measles outbreak causing widespread alarm in the US, approaches and attitudes to vaccination have seen a new peak in terms of public conversation over recent weeks.

With some parents citing personal beliefs and the fear of the potential side effects of vaccinating their children, the topic has been elevated to global proportions by celebrities who have used their fame as a platform to protest vaccination. Other times, the discussion around the practice of vaccination has veered into political territory, becoming a sort of proxy for bigger structural issues within the healthcare system.

Already having some idea about where most physicians stand on the issue, and sensing that the anti-vaccine movement is a relatively marginal stance compared to the wealth of mainstream medical knowledge and opinion, the team at Creation Healthcare carried out an analysis of healthcare professional perceptions of vaccines by studying their conversations in public social media. The study was carried out globally using our HCP online listening service Creation Pinpoint, and looked at the most common vaccines utilised in modern medicine including measles, mumps, smallpox, hepatitis, flu and whooping cough.

Despite regional differences, the most discussed vaccines are the measles shot and the flu vaccine.

In the charts below, we can see differing levels of conversation around different vaccines in different countries – while HCP conversation in the US was undoubtedly affected by the recent measles outbreak, we can see how this conversation extended to other countries, with HCPs in the UK and Canada also weighing in on the matter.

Twitter is a global platform for healthcare professionals to be in touch with one another and answer questions in real time and across regions and countries. What we do notice however, is that language remains a factor in the way news is distributed across HCP peer networks, so conversations in countries where English is spoken as a first language are influenced by physicians tweeting in the US and UK. 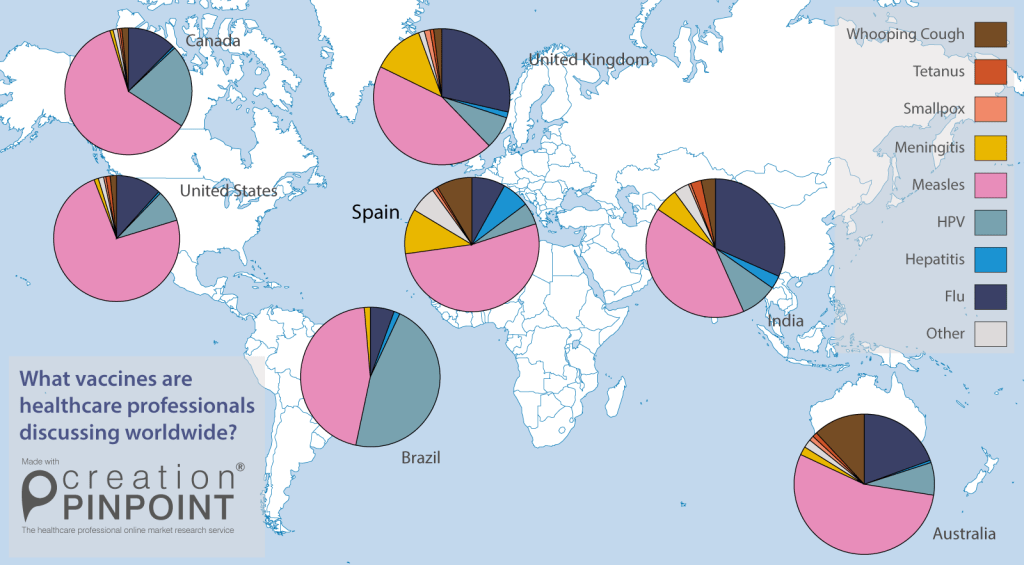 Examining the charts however, it is noticeable that local news stories have still made their way into the charts. In the UK for example, there is a noticeable amount of discussion around the meningitis vaccine, after a deal between vaccine provider GlaxoSmithKline and the UK government was announced in March 2015. As part of the nationwide vaccination programme, all UK babies will now be immunised against MenB in addition to other diseases. 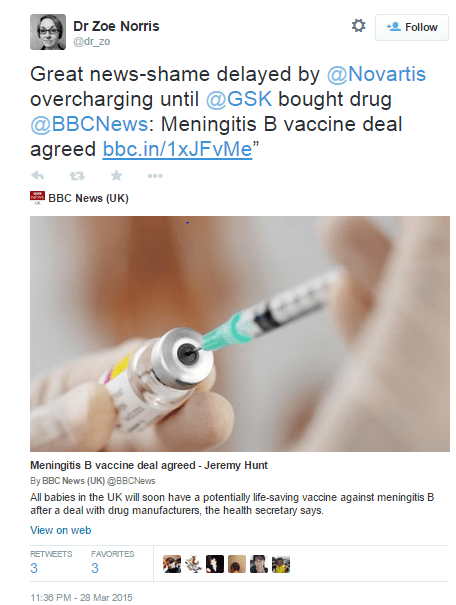 UK-based physician and blogger Zoe Norris comments on the Meningitis B vaccine deal, mentioning the delay in implementation due to previously inaccessible costs.

Doctors will comment based on the news cycle & current priorities but ultimately their interests are local and culture bound.

With other countries such as  Spain, Brazil or India however, locally relevant news volume equalled or trumped the volume of conversation happening around measles.

While measles was still discussed in these countries, local doctors took to Twitter to talk about other vaccines in much higher proportion than in the US.

In India, after the recent swine flu outbreak, HCPs based in the country tweeted about vaccines whose aim is to prevent the disease, commenting on studies and responding to local news by offering their medical take on the story. 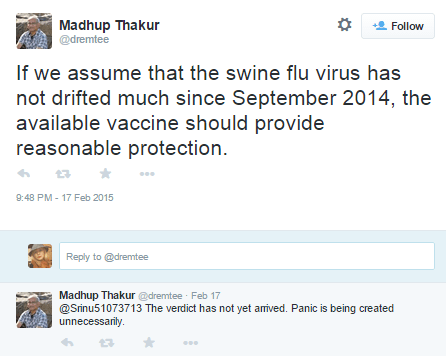 Dr. Madhup Thakur comments on the 2014 swine flu vaccine and whether patients need a second phase of immunisation.

In Spain, we see a more ‘balanced’ volume distribution pattern – after measles, the other vaccines discussed have generated relatively similar levels of conversation volume, with doctors discussing vaccines like HPV and whooping cough much more broadly. 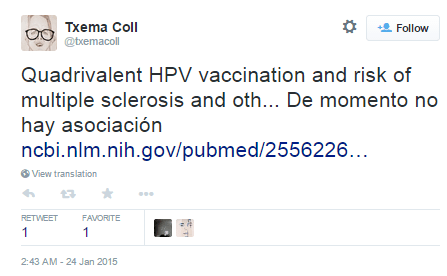 A Spain-based family GP comments on the results of a study focusing on the association between the development of multiple sclerosis and the HPV Vaccination.

While the measles vaccine was still the most discussed one in Spain, doctors mentioned other vaccines in much greater volume than in the US, UK, or Canada.

Responding to whooping cough cases in Spain, Zaragoza-based paediatrician Cristobal Bunuel posits that it is possible there is a link between the outbreak and the acellular vaccine. 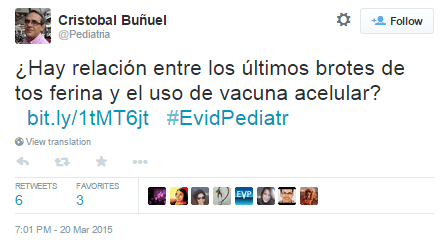 A paediatrician in Spain considers a link between whooping cough and the use of acellular vaccine.

The tweet had 6 retweets and 3 favourites, suggesting that other healthcare professionals found the association valid and passed it on to their peers.

While vaccines can often be a sensitive topic, fluctuating levels of public trust make it crucial for healthcare professionals to maintain a constantly evolving and engaged dialogue with members of the public, as well as with their peers in different regions. The need for shareable resources that provide evidence-backed data in a visually appealing way can stimulate that conversation – the Wall Street Journal’s set of charts that log the number of people infected with various preventable diseases in the US over time did exactly that, being the resource doctors re-tweeted most during the study period. 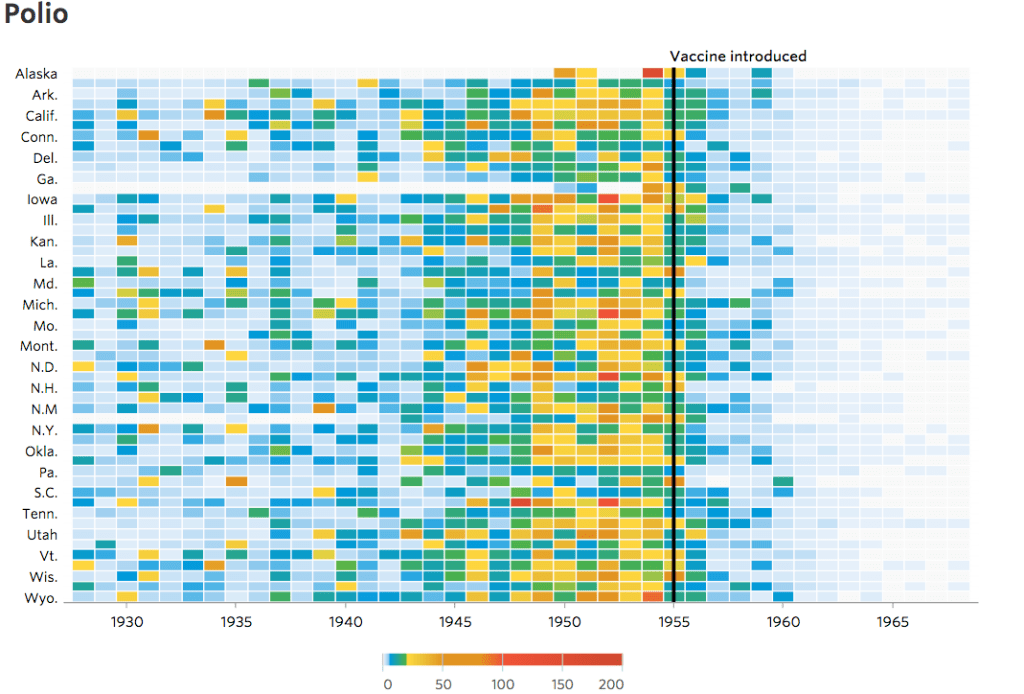 WSJ’s charts number of infections in the US over time, demonstrably showing the benefits of the introduction of the polio vaccine. Source: WSJ.com

In the globally connected public health world, lessons learned in one region can rapidly reach others; medical knowledge and discussion is taking place both nationally and internationally. Understanding conversation trends among HCPs in individual countries can help us to understand global and regional public health issues and could help policymakers to identify the most important issues in a rapidly-changing environment.

The study was conducted using Creation Pinpoint, a service built on proprietary technology that listens to millions of conversations taking place among healthcare professionals in public social media, in order to develop useful insights for health systems, policy and healthcare companies.