What doctors say about Zika virus 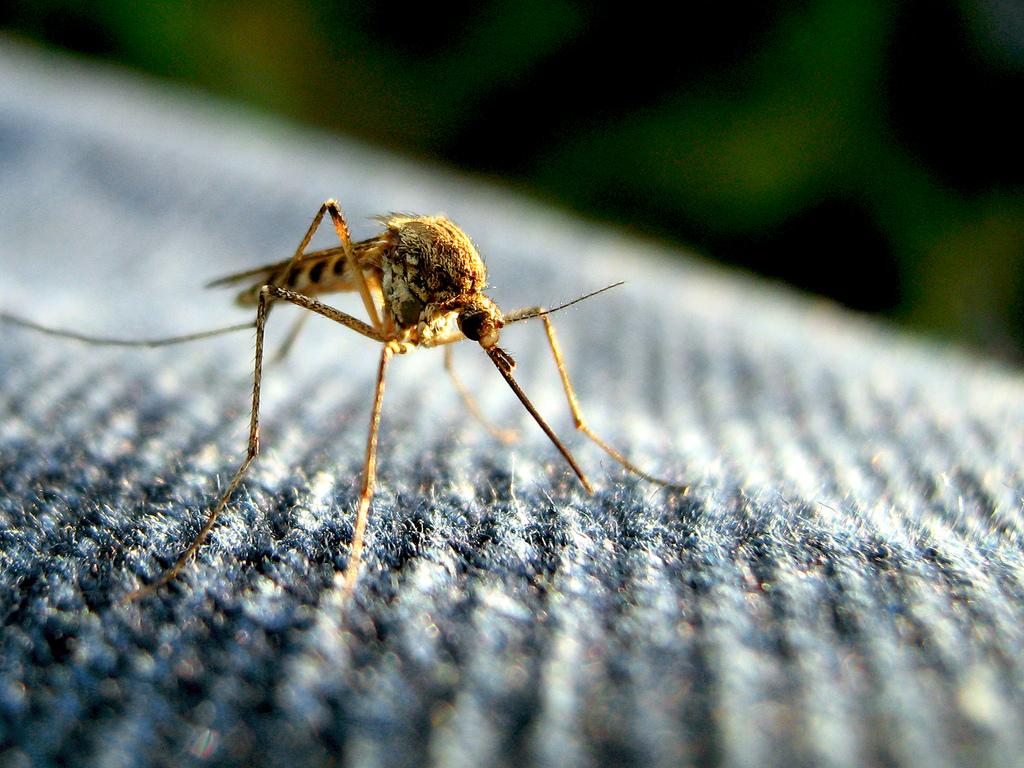 This month marks one year since lab tests in Brazil confirmed that the mosquito-borne Zika virus had arrived in the Americas for the first time ever, sparking fears of a new global disease outbreak. In the year since the outbreak, the disease has spread explosively, according to the World Health Organization (WHO), and has now been detected in nearly every country or territory infested with Aedes aegypti, the principal mosquito species that transmits Zika, dengue, and chikungunya.

During an emerging health crisis it can be helpful to understand what healthcare professionals (HCPs) are saying, distilling their voice on social media, for example, from all the other public and media noise. By analysing online HCP conversations about Zika virus over the past year, we can learn how doctors and other healthcare professionals around the world have been reacting to news about the virus, and how and where they have been learning about it.

Playing down the impact

Throughout 2015, HCP conversation about Zika virus outside of South America was limited. Data analysed using Creation Pinpoint suggests that even most healthcare professionals were not particularly alarmed about Zika when it first reached the Americas, with some even referring to the virus as “dengue-lite”, playing down its potential impact compared with the debilitating mosquito-borne tropical disease dengue fever. 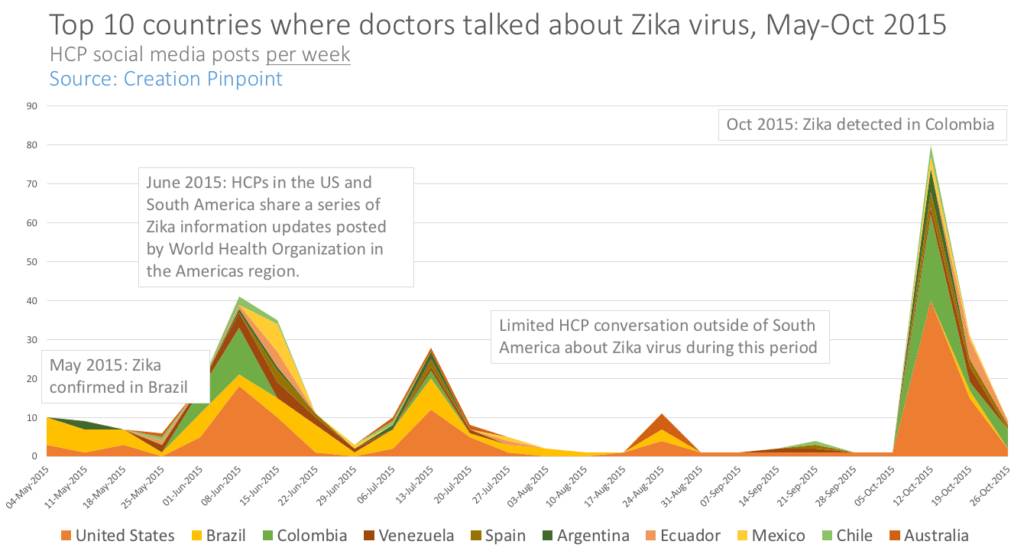 Chart: During the first six months after Zika virus was detected in Brazil, the ten countries in which HCPs talked about the disease the most were predominantly in the Americas, although interest was very limited aside from discussions about significant news events. (source: Creation Pinpoint)

During this period, key events in the spread of Zika virus were annotated by doctors sharing information in affected countries; Zika’s detection in Colombia in October was marked by a spike in HCP conversations in the country, as well as the United States where some doctors were watching developments.

One doctor in Brazil, however, was far from complacent during the early days of the Zika virus outbreak. Daniela Freitas, a professor at the University of Piauí with a special interest in microbiology, immunology and parasitology, was one of the most prolific HCPs discussing the virus, posting well over 2,000 Tweets about Zika in the twelve months since May 2015. Unlike some HCPs, Prof. Freitas was not complacent during the early days of the outbreak. Tweeting in Portuguese, she shared resources, warnings and information about the spread of the disease, such as PAHO’s interim recommendations for detection and diagnosis on June 24th.

Back at the start of the confirmed outbreak, when Brazil reported the virus’ presence in the country on May 7th, Prof. Freitas had shared four posts about Zika, and from this day on it appears she was on a quest to learn and share information about the virus. Her ongoing commentary cited New England Journal of Medicine; the US Center for Disease Control (CDC) and WHO; as well as politicians and writers.

Towards the end of 2015, as more countries in the Americas reported Zika virus, there was a gradual increase in HCP conversation about the disease. At this stage the HCP reaction to the virus was still largely apathetic, even when WHO issued an alert on December 1st about an association between Zika virus and congenital malformations in the Americas. 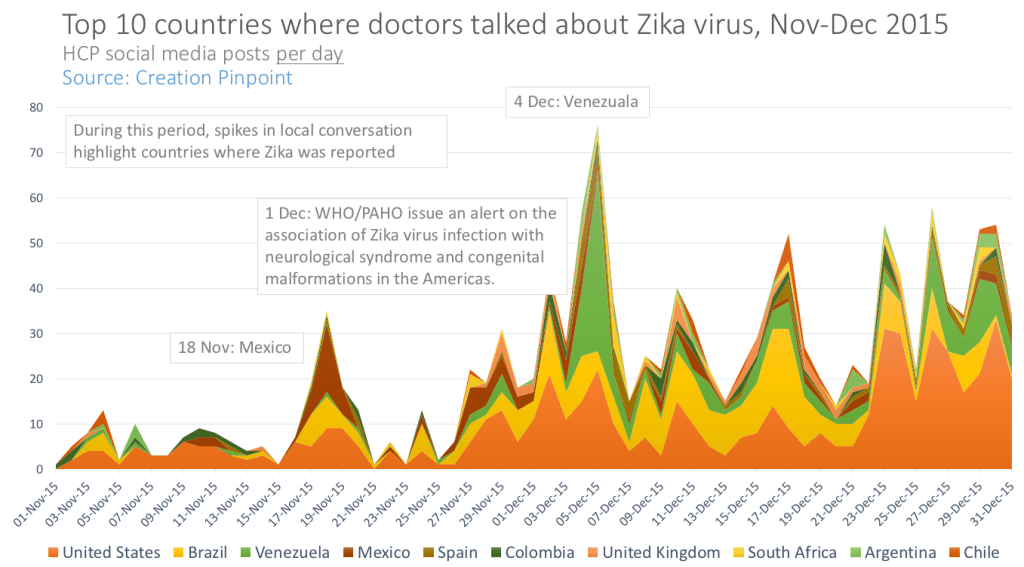 Chart: HCP conversation about Zika virus increased towards the end of 2015 but remained low volume even after WHO congenital malformations warning. (source: Creation Pinpoint)

In terms of HCP conversation, 2015 may be seen as the quiet before the storm for Zika virus, with an apparent low level of HCP interest in sharing of news and resources on the disease until early 2016. On January 4th,  doctors shared a Tweet posted by the Lancet Infectious Diseases journal, referring to Zika virus somewhat light-heartedly as “the disease du jour”. But over the following hours and days a series of new reports from Brazil brought the tragic effects of Zika virus into the limelight.

On January 5th, researchers reported the first diagnoses of intrauterine transmission of the Zika virus in two pregnant women in Brazil whose foetuses were diagnosed with microcephaly, including severe brain abnormalities. Throughout January, new reports confirmed cases of Zika virus associated with microcephaly, a condition in which babies are born with an abnormally small head and impaired brain development. As reports of the effects of the disease increased, so did HCPs’ levels of interest and conversation. 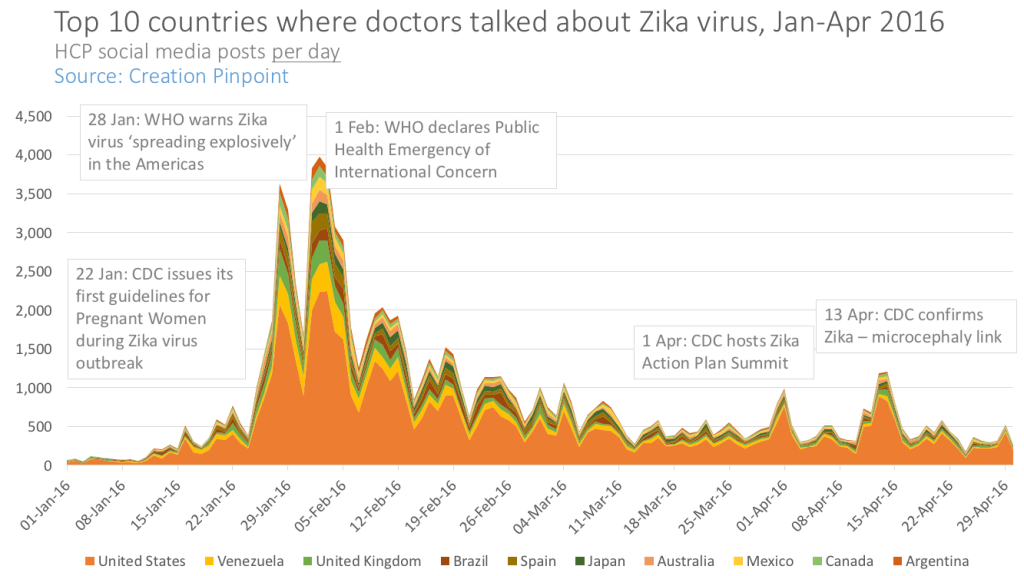 By the end of January, as WHO warned that cases of Zika virus were ‘spreading explosively’, HCP conversation about the topic was also fuelled by further news reports of the disease appearing in more countries including the United States. In the UK, midwives used Twitter to share advice in a briefing from the Royal College of Midwives. Some doctors, however, such as Prof. Marion Koopmans, head of virology of the Laboratory for Infectious Diseases of the National Institute of Public health in the Netherlands, expressed concern that the conversation taking place about microcephaly was based on information from popular media, rather than peer reviewed reports.

On February 1st, when WHO declared that the association of Zika infection with microcephaly and other neurological disorders constituted a Public Health Emergency of International Concern – placing it in the same category of emergency as the 2014 Ebola outbreak – HCPs’ interest in the disease peaked, reaching more than 5,000 mentions of the virus by HCPs worldwide on one day.

As the Zika virus story has developed over the past year, doctors who were widely complacent about the disease during the initial months of the outbreak became increasingly interested in learning and sharing information. Despite some comments from HCPs about the lack of scientific content available at first – and therefore the risk of being led by popular media stories – it is perhaps reassuring to learn that the authorities HCPs were most likely to share information from included the world’s major public health authorities – WHO and CDC, as well as their peers and medical journals. In fact, the Twitter profile most mentioned by HCPs in relation to Zika virus was @WHO (3.4% of all HCP Tweets about Zika virus mentioned or cited @WHO), followed by @CDCgov (2.6%).

Studying the development of HCP online conversations about Zika virus, with the benefit of hindsight, illustrates some interesting behaviours. Here are my key take-aways:

This article originally appeared on Pharmaphorum in late May 2016

Data for this article was analysed using Creation Pinpoint, the HCP online insights platform. 129,914 HCP posts on public social media during a 1-year period between May 2015 and April 2016 were studied, including Tweets, forum posts, comments and blog posts.

Daniel Ghinn is Founder and CEO of Creation Healthcare, the HCP online insights consultancy and inventor of Creation Pinpoint. He tweets at @creationdaniel.