What HCPs say about medical cannabis use 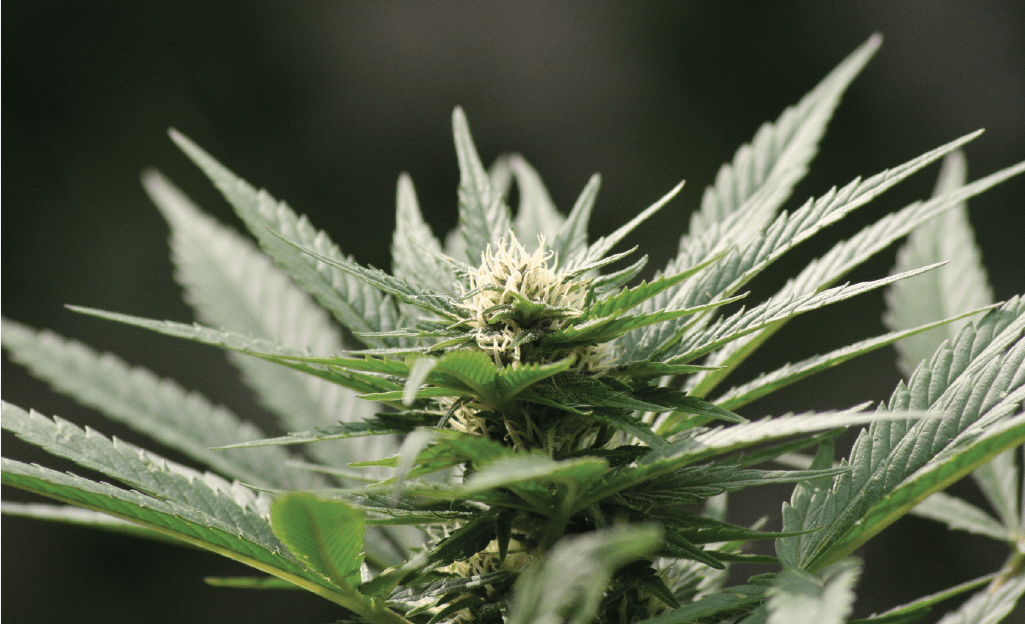 This article was written and researched by Adam Doggett, one of our Research Analysts at CREATION

Marijuana stimulates wide-spread debate, in many places around the world the drug is legal for medicinal and even recreational purposes whereas countries such as the United Kingdom (where medical cannabis has been banned since 1971) see the drug in a very different context. Several recent articles provide an informative and unbiased take on the issue of growing momentum.

The views of Healthcare Professionals (HCPs) on Twitter show the professional side of the story. From the perspective of a patient, it may be easy to see the benefits cannabinoid-based pain-relief, but what do those writing the prescription think?

The topic of medical cannabis has come to the fore recently with The Drug Enforcement Administration (DEA) announcing that marijuana will remain schedule 1 (no accepted medical use, high potential of drug abuse) in the United States. However, some leeway for a future reintegration into the medical system was offered by lightening the restrictions on medicinal cannabis research. On August 11th 2016, Canadian pain management legislation also saw changes which now allows patients to grow their own supply of cannabis, provided strict adherence to federal safety guidelines.

Simmering conversation reached boiling point in the middle of September; reports surrounded the effect of cannabis on the USA opioid addiction epidemic and British MPs urged their own government to take action. The Guardian, Sky and the BBC’s take on the MP’s movement were shared widely by HCPs on twitter whilst various sites publicising the claims that cannabis is the cure to the opioid crux (in the USA opioid over-dose rate increased almost four-fold between 1998 and 2008) were equally popular.

A topic which attracts global intrigue saw heightened activity between the 13th and 18th September, which was largely down to male authors taking to twitter to have their say. Of the 182 tweets posted by HCPs within the six-day window, 118 came from males, who make up 54% of the study population. During this period the male voice increased to dominate the conversation with 1.84 tweets per female tweet, a significant rise on the total study ratio- a much less overpowering 1.11 male tweets per female tweet. The excessive male presence during this week could indicate a greater propensity to latch on to a story which may shape an aspect of our future. Alternatively, one could be witnessing the consequences of a group of males getting carried away in media hype. 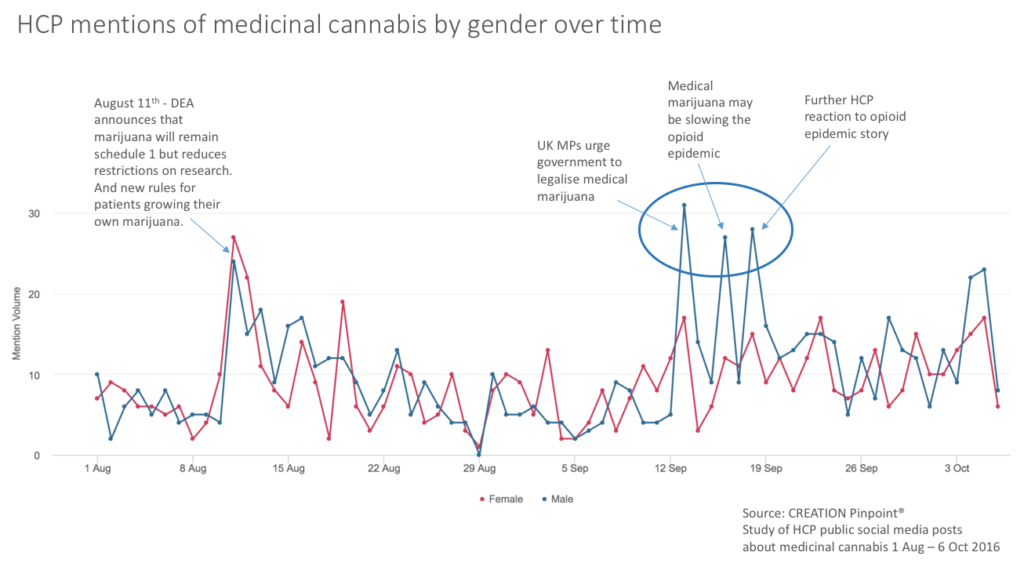 An analysis of role type reveals some very interesting things about the demographics of those publicly supporting medicinal cannabis online. The most prominent role type engaging in this conversation were nurses; 29% of the categorised HCP authors fall into this sector (individuals may be categorised in multiple role types). Psychologists and Psychiatrists made up the second largest section whilst very few neurologists shared the voice online during this period (10; categorized within ‘other’). 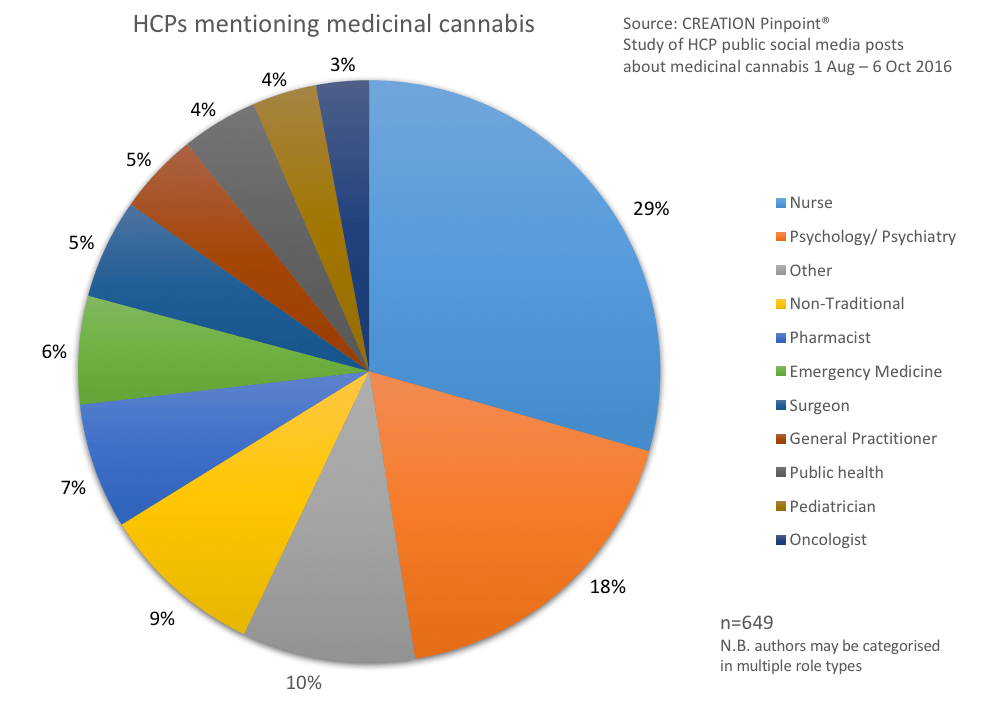 Perhaps unsurprisingly, non-traditional role type HCPs (Herbalists, Iridologists, Nutritionists, Hypnotherapists and Homeopaths) have been turning out in their numbers to make sure that they are heard. In this study it can be seen that those who choose to practice alternative branches of medicine are also more than willing to go against the grain by sharing their views on one of society’s big taboos. However, relative to other role types, non-traditional HCPs do not labour the point, with an average of just 1.43 tweets per author, the least across the study period. 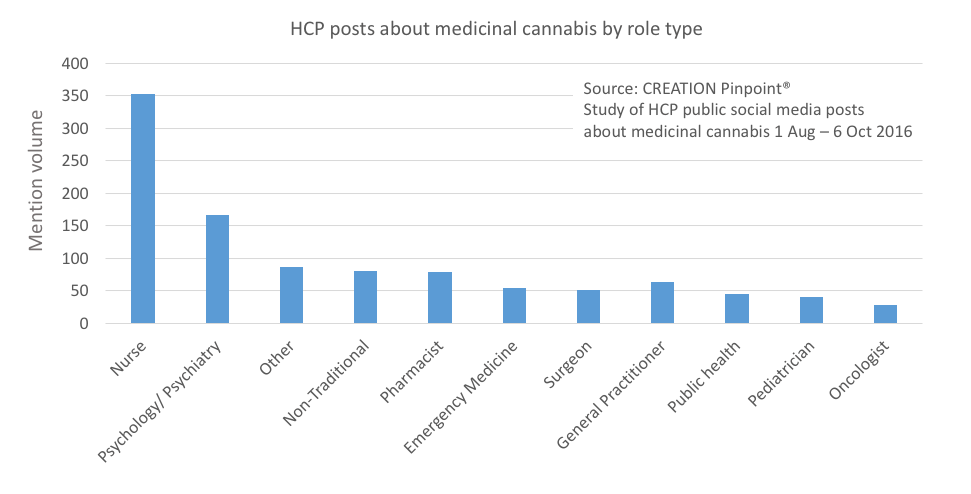 It may be a perception that marijuana is only consumed and promoted by the younger generation. However, our study showed that less than 4% of the contributors to the online discussion were students training to become HCPs. 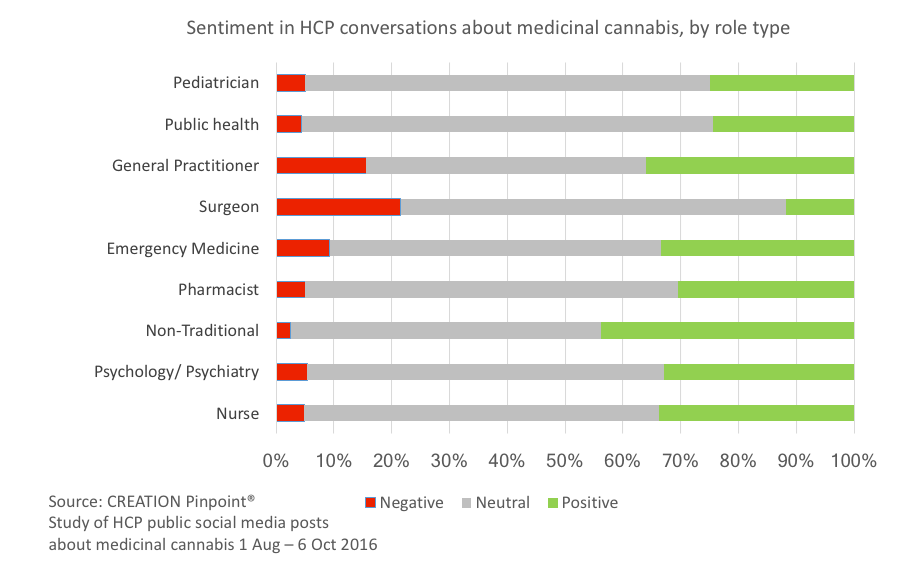 A closer look at the conversation by role type demonstrates that most HCP groups have a relatively positive outlook towards medicinal cannabis. This is particularly noticeable within the non-traditional HCP demographic who expressed a positive sentiment in 44% of their mentions (n=80). Surgeons on the whole conveyed the opposite message with only 12% showing positivity towards medical cannabis and 21% negativity (n=51). Surgeons aside, the overriding consensus is in favour of using the drug for medical purposes. David Laskowski, who describes himself as a Clinical TCM [Traditional Chinese Medicine] Herbalist and Certified Nutritional Consultant, did not hold back his opinion, blaming the prohibition on the financial muscle of the pharmaceutical industry, who, according to the video he shared, will stop at nothing to protect their own assets.

Big Pharms will do anything to keep people drugged….medical Marijuana is a life saver for so many….without… https://t.co/2jb4g175Zq

Laskowski is not alone in his stance; Dr Berry Pierre also divulges about pharmaceutical conspiracy theories in a blog post which explains why he switched from ‘the opposition’.

Standing out in the seemingly vast crowd, Michael Kirsch warns of the dangers of flirting with a substance lacking scientific merit. His blog post, published on the website of influential social media physician Kevin Pho, was shared 12 times by HCPs on twitter within the study period.

Despite these rare acts of defiance, it seems as though the online HCP community sways towards the use of medical cannabis. However, whilst the pro- tweets outnumber the against by almost five to one, there is still something to be said by those who sit on the fence in regards to this issue. 65% of the mentions in this study did not express a strong view for or against, often simply reporting current news, and a significant portion of the conversation is derived from shared links and re-tweets. For example, the thoughts of drug advocate Professor David Nutt were endorsed and shared by others HCPs 20 times. The tendency of HCPs to support the view of another rather than present an original tweet may be a symptom of the controversial subject at hand.

It remains to be seen whether sentiment of HCPs on twitter is also endemic of the offline population or just a vocal minority taking the stage. In any case, perhaps local governments have something to learn from the online interactions between healthcare professionals which may in fact prove decisive in the way that heath regulations are sanctioned.

Featured image by Martjin and used under creative commons licence.