What HCPs Say About Mental Health 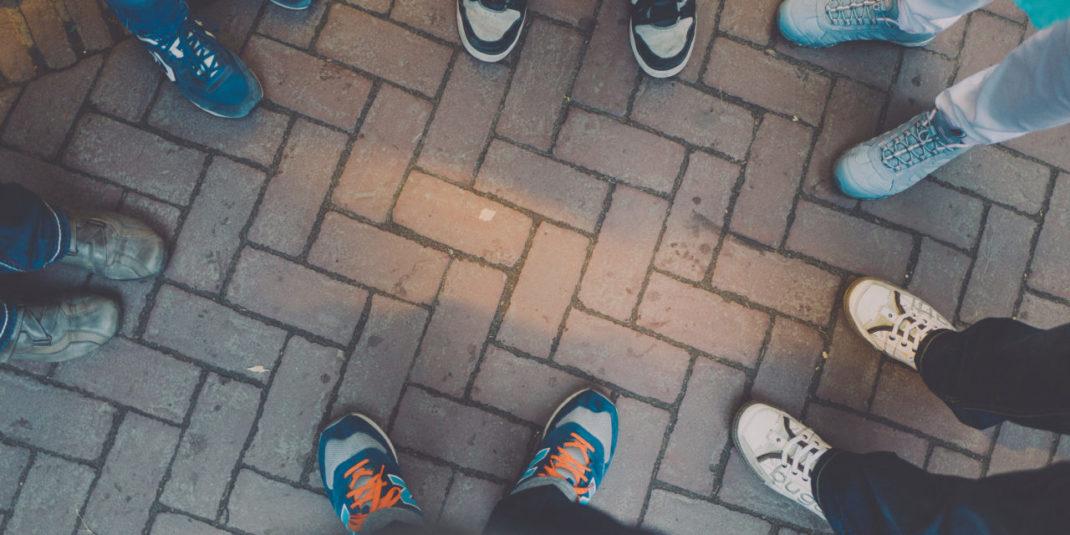 According to the UK charity, Mental Health Foundation, ‘if we don’t act urgently, by 2030 depression will be the leading cause of illness globally.’

Mental health needs to be talked about, and thankfully those in healthcare, as well as wider media outlets and affected parties, are starting to give the subject the credence it deserves. A number of initiatives have been set up to increase education, conversation and awareness around schizophrenia, depression, anxiety and other mental health illnesses.

One such initiative is World Mental Health Day, a day for global mental health education, awareness and advocacy against social stigma. It was first celebrated in 1992 at the initiative of the World Federation for Mental Health, a global mental health organisation with members and contacts in more than 150 countries. This day, each October, thousands of supporters come to celebrate this annual awareness program to bring attention to mental illness and its major effects on people worldwide.

This year the day was held on October 10th, and media was full of related articles and endorsements from celebrities, talking about this once stigmatised area of health. The picture on social media was similar, with thousands of mentions of #worldmentalhealthday, #wmhd16 and related topics across the world.

While public conversations are readily viewable, it is much harder to find out what psychiatrists, psychologists, mental health nurses and primary care physicians think of the day, and to get a picture of how experts in the field use social media to discuss mental health in general.

Using CREATION Pinpoint, we tracked the European online conversation among healthcare professionals in the lead up to, and around World Mental Health Day. Twitter hosted the majority of the dialogue and contains valuable insights into HCP discussions; here we dive into the data to identify the topics discussed. 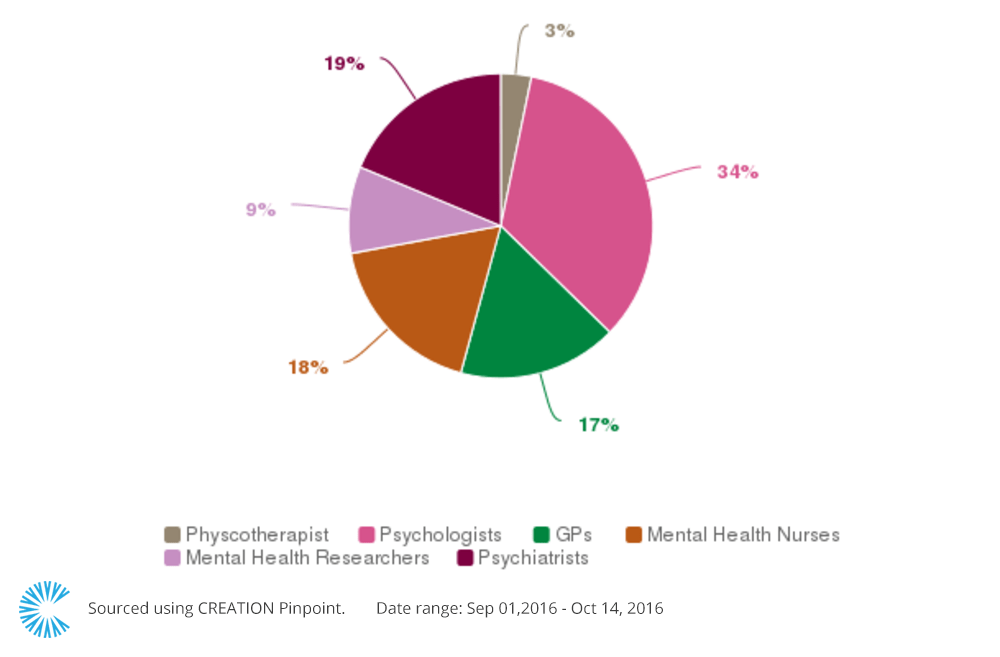 We tracked conversations around numerous mental health topics, both by therapy area and role, twinned with inclusion of hashtags that supported World Mental Health Day and found that psychologists were the most involved in conversation.Interestingly, there was a strong discussion across different role types, with each profession getting involved in the conversation.When looking at hashtag use throughout the tracked period, we see that #worldmentalhealthday has strong prominence, however it is only a small part of the already active #mentalhealth conversation.

Topics that were discussed ranged from positive mentions, speaking about how World Mental Health Day and related initiatives have increased awareness of the issue, to negative comments made about funding availability and a lack of services.

This lack of funding seems to be the new norm..sadly #mentalhealth https://t.co/K6VztjI7Hi

Psychologist, Colette Bonar comments on a Guardian article specifically calling out a lack of funding for mental health.

In Europe, the UK talks most 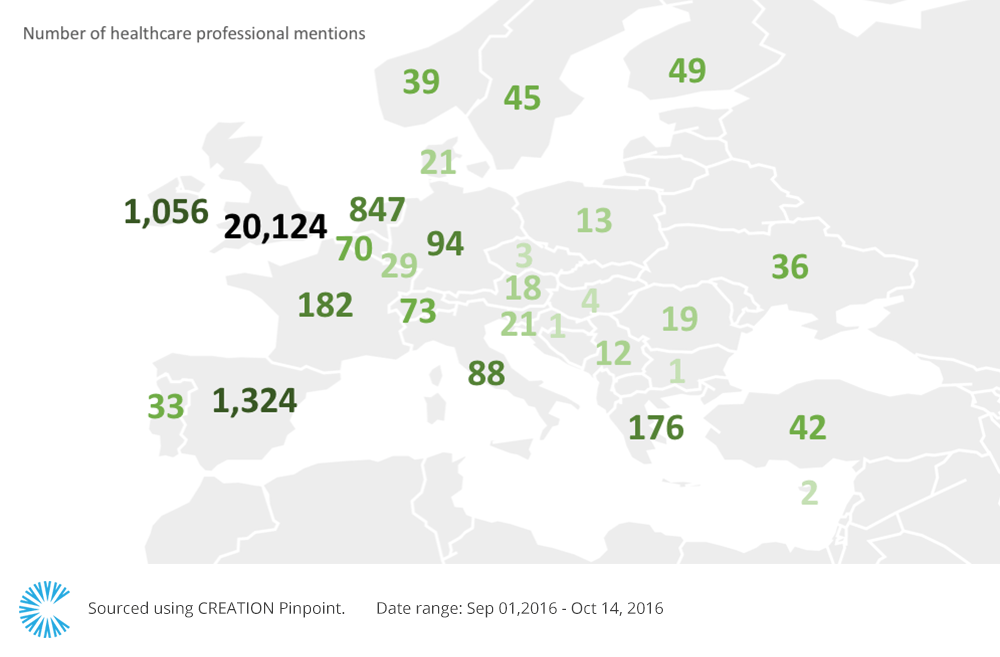 When looking at English language mental health conversation across Europe, it’s clear to see that the UK is the leading voice. This is unsurprising, as World Mental Health Day is an English language initiative. What is interesting however is the volume of conversation coming from places such as Spain and the Netherlands, where online posts and engagement are high in comparison to other European nations.

While many articles from the BBC, The Guardian and other mainstream media outlets were shared widely, some of the most engaged content came from HCPs themselves.The below graphic by Clinician, Professor Louis Appleby was retweeted 271 times and liked 180 times.

10 safety measures that every #mentalhealth service should provide; from our report launched today, based on 20yrs of evidence. #ncish20yrs pic.twitter.com/nxXR93bnsF

If the conversations of healthcare professionals are to be used as an indicator that mental health awareness is being raised, then 2016’s World Mental Health Day can be called a success.The below chart shows a steady stream of conversation around mental health in the lead up to October 10th, however on the day itself, psychiatrists, psychologists, mental health nurses and primary care physicians posted more than 1500 tweets and messages on social media. 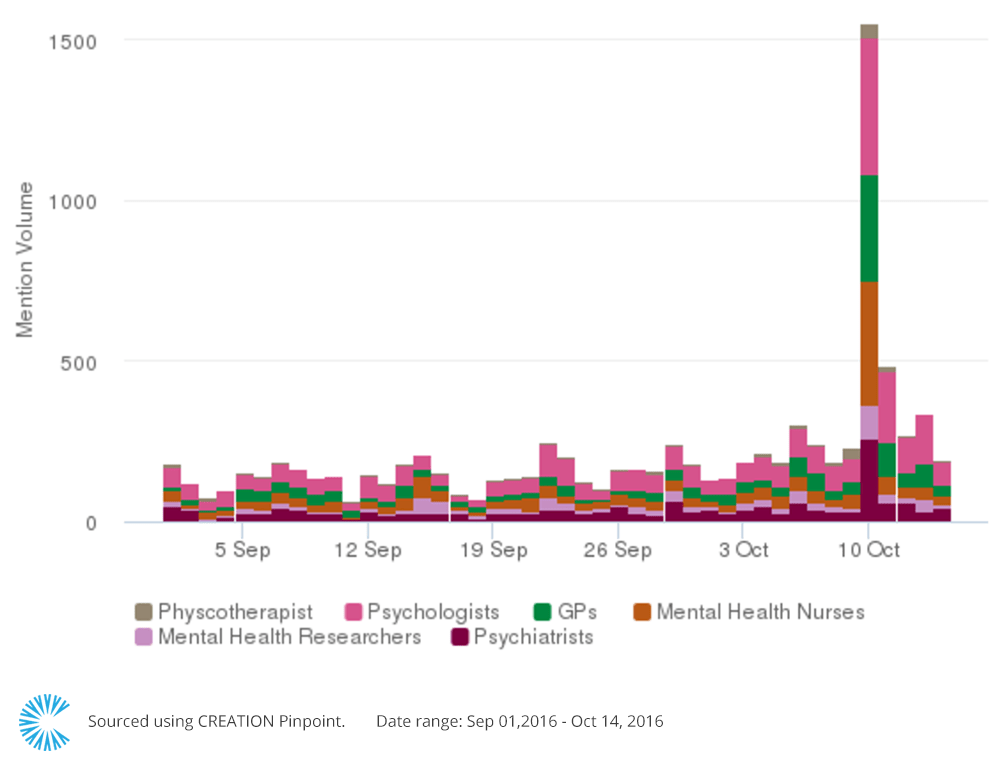 Attitudes towards mental health are changing, and as social media engagement from healthcare professionals continues to increase, we are sure to see the conversation grow from year to year. It’s time that the stigma around mental health comes to an end, and initiatives like World Mental Health Day and the associated conversations online will only help to make that a reality.Featured image by Matthias Ripp and used under creative commons licence.