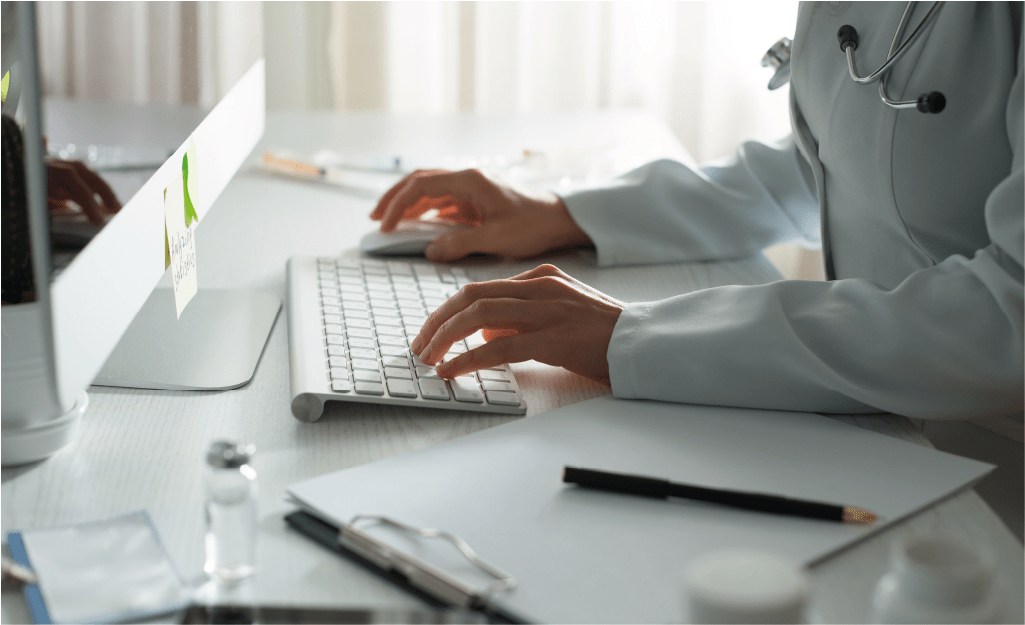 This post was first published as part of our ongoing #WhatHCPsThink series on pharmaphorum.com.

With most of the world being in lockdown we are all looking for new ways to continue to lead our lives as normally as possible. From personal zoom quiz nights with family to gathering market research at work from sources that don’t require personal contact. For healthcare professions (HCPs) we, at CREATION, have seen how they are adapting their day-to-day as well as larger activities, to continue to support patients and engage with peers during the COVID pandemic. Many of the tools for HCPs to adapt have already been available, but we have seen increasing use of video consultations and social media to ask their global peers questions.

As we start the season of medical congresses, many organisations have now chosen to either cancel or continue their meeting virtually. Medical congress meetings draw thousands of attendees from around the world and are a great opportunity where pharmaceutical companies and HCPs alike can interact in-person. Traditionally during these times we have also seen an increase in social media activity by HCPs engaging with their global peers, sharing content and highlights from the congress. With this change in format, what do HCPs think about virtual congress?

CREATION has been tracking the conversations about virtual congresses since February this year with close to 14,000 posts in English language from over 8,000 HCPs globally. There was a significant increase in the conversation from the 6th of March 2020, with HCPs anticipating live meetings to be moved to virtual meetings.

Many HCPs have expressed their excitement about virtual meetings from medical organisations. Mohamed Salem, a gastroenterology oncologist acknowledged the effort that the American Society of Clinical Oncology (ASCO) is putting in for COVID-19 as well as looking forward to their virtual scientific program.

Kudos to @ASCO, #ASCO20 team, their leadership and staff for the splendid perseverance to carry on their great mission during such hard time #COVID19. Looking forward to a great virtual scientific program!! https://t.co/cANlXVxl4n

HCPs were highly positive toward virtual congress, sharing news of congresses going virtual, the benefits of having virtual meetings and still having access to the much needed updates in their therapy areas.

Many HCPs shared their excitement of the launch of virtual congress and were actively sharing the news to their peers as congress after congress was made virtual.

BREAKING NEWS: #CROI2020 will be a virtual meeting this year! Thanks to @IAS_USA @DonnaJacobsen and all CROI leadership for wrestling with this difficult decision and putting public health first. https://t.co/KPmJ66x7GL

Off the back of this news, HCPs were sharing the benefits of having virtual meetings, with them being more accessible for people to participate, less expense for travelling and also saving time.

However following congress we have seen HCPs expressing some of what they miss from in-person meetings. For many HCPs this is a key time to interact with peers and network. Following the congress of the American Association for Cancer research (AACR) on April 27 – 28th 2020, Charu Aggarwal, a medical oncologist shared how much she missed the atmosphere of in-person congresses and connecting with her friends and colleagues. A sentiment which was shared by many HCPs.

Kudos to @AACR @AACRPres for organizing a seamless #AACR20. While I get used to this new #virtual format, I am reminded of *how* much I miss the vibe of the plenary halls, the palpable energy and chatter, the audience applause and connecting with my friends + colleagues. 😢

The overall sentiment from HCPs during and after AACR this year was highly positive despite some of the challenges they faced with technology. HCPs thanked AACR for bringing HCPs together and continuing to provide data and updates in progress in the oncology field.

Thank you @AACR for bringing us together (virtually) to share and learn during this challenging time. Progress in #CancerResearch doesn't & won't stop. Looking forward to Part II in June! #AACR20 Virtual Annual Meeting I Draws More than 61,000 Registrants https://t.co/FrhoZwGSww

Despite the congress changing to a virtual format, the American College of Cardiology’s (ACC) world congress was well engaged with by HCPs online this year with close to 6,000 English language posts from just over 2,600 HCPs globally. Interestingly, compared to our analysis of the online conversations of HCPs at ACC in 2019, there were 9,000 fewer posts in 2020, with around 200 HCPs fewer contributing to the conversation.

When comparing the HCP authors who had been posting in each year, there were just under 800 HCPs who posted about both meetings, and a significant number who posted about one, but not the other.

Typically during congress we see a number of digital behaviours exhibited by HCPs online. This includes the use of congress specific hashtags to share highlights, posting images of data from sessions, sharing photos of the colleagues and friends they meet and engagement with pharma content.

As many HCPs join the online space, congress specific hashtags during this time are especially important for HCPs to quickly get to the content they are interested in. One nephrologist, Tejas Desai, shared a post linking to a regularly updated archive containing all the tweets from ACC20.

Play with the data here: https://t.co/SR6erKswVa

HCPs continued to share images of the data presented during sessions, receiving large engagement from peers in the comments of their posts, discussing the findings as they may have done in person. More than 60% of the posts shared during ACC included an image.

Interestingly, instead of sharing photos of who HCPs have met up with during congress HCPs were instead showing their home set up for the congress or of their pets. Still providing an insight into not only the professional but also the personal side of congresses.

A common activity at congress are TweetUps, which give an opportunity for HCPs who are connected and engage with each other online to meet in-person, take selfies, share these online and engage in Twitter trivia. With ACC20 having been made virtual, HCPs still took to the online space to meet using Zoom.

Another interesting behaviour seen more prominently this year was HCPs taking on the task of officially sharing content for specific hashtags. Lina Ya’qoub, an interventional cardiologist, notified her peers that she would be posting updates from the virtual ACC20. This positioned  her as a go-to and easily accessible source for content during the congress.

ACC advocacy, an ACC account focusing on health policy news, took this opportunity to engage with HCPs using common HCP digital behaviours, such as Twitter chats to engage with HCPs and create a sense of community with the virtual congress. HCPs called their peers to engage in these sessions and connect with each other.

Join us Saturday, March 28 at 11 a.m. CT/12 p.m. ET for a Twitter chat in the Virtual #HeartPAC Lounge. Connect with other advocates and share your favorite #ACCAdvocacy experiences. #ACC20/#WCCardio pic.twitter.com/Yhr64EVr23

Opportunities abound to support and engage HCPs during congress

With the first major virtual congresses of this year receiving such positive feedback and large engagement with physicians, congress still remains a key opportunity for organisations and pharmaceutical companies to engage with HCPs. Even more so, now online. In this article we’ve seen that HCPs are still finding virtual congress useful to share new developments in their therapy area and engage with peers on a professional and personal level. For those interactions that they miss with in-person congress meetings, HCPs are exhibiting new digital behaviours to compensate for this including longer discussions on peers’ posts and video calls to connect socially.

There are two key opportunities presented. The first, to engage with digital opinion leaders in your therapy area to facilitate collaboration with other HCPs online in Twitter chats, data sessions and sharing highlights of new releases. Secondly, as HCPs are increasingly having their offline conversations online, specific insights on their views and opinions of your data are more than ever available to gather.

During this interesting time in the history of the world we are seeing new opportunities in the digital space to support and engage HCPs, providing hope for the ongoing work of the healthcare industry. 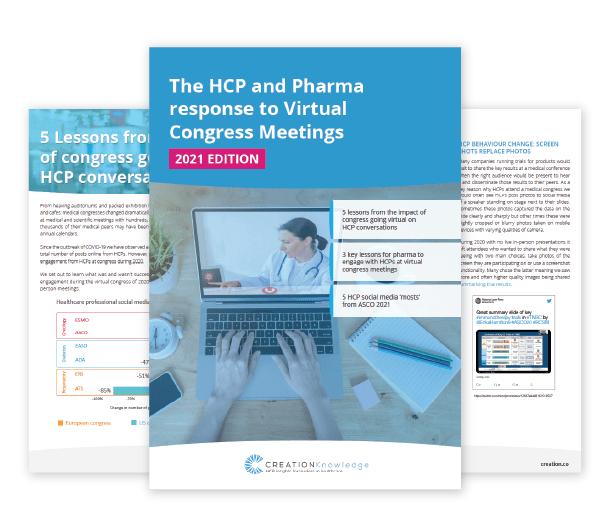 Since the outbreak of COVID-19, we have observed a large overall increase 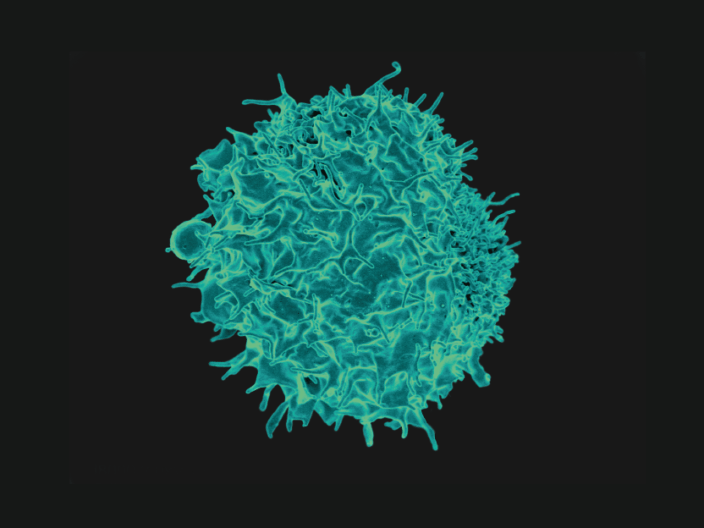