Why Germans don’t tweet and other questions about HCP market research, answered.

Although HCPs on social media are typically keen to collaborate with each other across countries and continents on topics ranging from emergency medicine to nutrition, we often find that the digital landscape of a country differs wildly from that of its neighbour. Whether it’s due to cultural factors, the existence of other, lesser-known social networks in said country, variations in legislation, or even linguistic constraints, doctors in different countries will inevitably behave differently in a digital environment. Of course, changes and variations in HCP behaviour are also dependent on events stirring the industry at the time of study, as well as external stimuli such as mainstream newspaper articles.

So what happens when a healthcare organisation is looking to assess the unaddressed needs and opportunities within a particular therapy area? Depending on the time frame and overall strategic objectives of the organisation, it is often a useful and efficient option to look at the overall picture in a particular region and then gradually ‘zoom in’ to look at the more specific issues that affect every sub-region. For example, we may know that within the area of diabetes in general, given the current socio-economic climate of unhealthy food options being both cheap and readily available , prevention is a big topic within HCP circles. However, when we segment our data to assess different countries by placing HCP conversations into context, we may find that for example in the US, some issues that doctors feel are not addressed enough are those of diabetes-related depression and anxiety (you can read more about our diabetes study here).

I will now present three mini case studies into how undertaking a multi-country or multi-region study into one therapy area can bring to light the ways in which digital preferences amongst HCPs can differ from country to country and why this matters for acquiring a thorough understanding of how best to address their needs.

1. Are Indian medics more active in social media than those in Pakistan?

A few weeks ago, I carried out a brief study into what HCPs around the world were talking about in relation to tuberculosis. Recently having been reported to be the subject of the most-accessed health related Wikipedia page, I wondered to myself what drove so much traffic to information about the disease and found out it was to do with the proliferation of multi-drug resistant tuberculosis – that is, strains of the disease that have developed a sort of immunity to traditional TB drugs and now pose a threat to global public health due to being very difficult to cure.

During my analysis of the tweets to do with the infectious condition, India came up as one of the top countries where HCPs were talking about the disease, with 7% of the total tweets having been posted by India-based HCPs. Being the country with the most cases of tuberculosis in the world, it may not come as a surprise to see the unusual volume of tweets coming from the area. Just that alone can be a finding in itself, as it is not always the case that countries with the most cases of one disease will necessarily have a lot of HCPs talking about it in an open, public way.

India-based HCPs shared advice, questions about campaigns, blog posts on the disease, as well as news regarding mobile apps that have the potential to make a difference in terms of prevention. 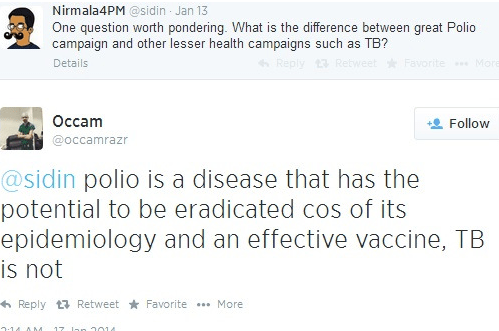 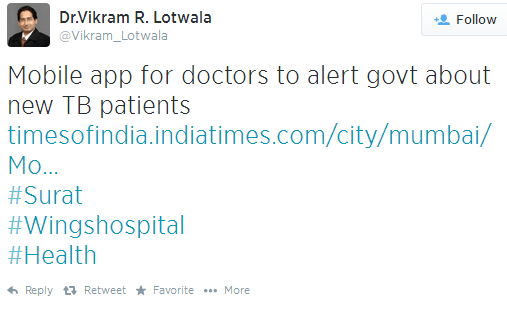 To show the contrast between the way HCPs in India tackle the subject and the way digitally active medics in Pakistan do, it is interesting to note that even though the latter ranks 5th in terms of countries with the highest TB-burden, there are not many tweets around the disease coming from the region. One tweet from a Pakistan-based medic however, clearly highlights an unmet need in terms of medical education and information – below, Aamer Iqbal reaches out to Mario Raviglione to ask what drugs were the best options for patients who have become resistant to the standard treatment. 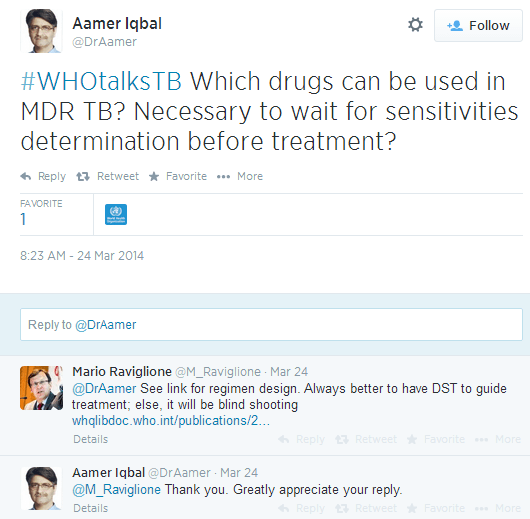 2. Can it be said that there is a German aversion to Twitter?

While carrying out a study in the area of cardiovascular health, we were experimenting with spanning across several countries to map out the differences in the way HCPs were communicating with each other in each location. One noticeable variation that stood out to the team was the low or below average volume of tweets coming from doctors in Germany. Instead, we discovered that German HCPs were actively using other, longer-form public channels such as forums, blogs and video to share their ideas. On our quest to perfect our knowledge and make it as specific as possible, we looked at the underlying reasons behind why this may be and found that several mainstream media had reported stories to do with Germans’ aversion to the microblogging website, citing privacy concerns as well as the simple fact that a German person’s perspective is more difficult to put into 140 character bursts of information than other languages.

This does not mean that we will be excluding Twitter from our list of channels to watch – on the contrary, we will keep an eye on the microblogging platform to see how and when the German network of HCPs is going to expand, manually analysing and tagging new HCP profiles every week as and when they come up.

During Glaucoma Awareness Week, I looked at what was being said about the condition on Twitter, and found that, for the duration of the awareness week, the number of Spanish-language tweets topped the number of English language tweets, with the top 3 countries tweeting about it being Spain, Argentina and Venezuela. While at first this comes across as an understandable, language related development (doctors speaking Spanish reaching out to each other across continents), looking at other, offline health trends and occurrences in each country can also help explain high numbers of tweets being posted in the aforementioned countries.

For example, even though Venezuela’s internet penetration rate is 44% (lower than Argentina or Colbombia, according to the World Bank), it contains a high number of digitally active HCPs. When putting this into a greater context in which we know that:

b)      there has been a massive drive to extend universal healthcare to the entire population during Chavez’s presidency as part of his priority to invest more money into social programmes,

…it is easy to see why the country’s doctors may opt for Twitter as an efficient, quick and cheap way of helping each other deliver quality healthcare to their patients.

I hope the above case studies have given you a bit of insight into how unique each country is based on socio-political developments, language and geographical factors, and how these factors translate to different HCPs behaving differently in different environments. Thinking about local differences might thus help bring to light some relevant questions that then have the potential to bring more focus to the study of HCPs in a particular region or country.