World Kidney Day 2014: What are HCPs in Social Media Around the World Talking About?

Every year both patients and healthcare professionals are bombarded with resources pointing to new strands of research and information around various disease areas in the context of different awareness campaigns. While in general, doctors tend to be well-informed with regards to these campaigns, either by directly being involved in them or from their network of peers, we decided to investigate conversations happening among healthcare professionals around these awareness days. The results will vary from campaign to campaign and it will be interesting to note the regional and conversational variations happening within each one of them. Are certain awareness campaigns more prominent in specific parts of the world? Are healthcare professionals using annual health days to start conversations with each other in different therapy areas?

The first awareness initiative we looked at is a very current one, namely World Kidney Day, a joint effort between several healthcare organisations, happening on the 13th of March every year. What are healthcare professionals around the world talking about in the context of kidney diseases and nephrology?

Firstly, it is important to mention that the conversation is happening on a global scale. As can be seen below, countries ranging from Morocco to El Salvador are taking part in conversation around renal conditions. Unsurprisingly, American and UK-based HCPs are slightly ahead of the curve being the two countries with the most mentions, followed by Venezuela, Spain and Canada.

A quick high-level overview of the global conversation in the form of a word cloud suggests that the majority of the conversation is taking place in English and Spanish languages, with a focus on chronic kidney disease, renal denervation, kidney transplants and kidney stones.

Because the majority of HCP conversations are taking place on microblogging platform Twitter, we also looked at the most frequently used hashtags to get a sense of what language HCPs were using to share kidney-related news and links with one another. After ‘kidney’, the second most popular hashtag was ‘dialysis’, but less common hashtags such as ‘nephmadness’ (refers to an initiative/website started by nephrologists to engage the kidney community) were used. HCPs also used the hashtags ‘#worldkidneyday’ and ‘#diadelrinon’ to refer to World Kidney Day. 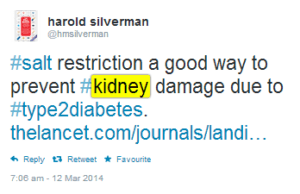 Furthermore, we identified 3 types of posts made by doctors around kidney diseases and disorders. The three types are as follows: 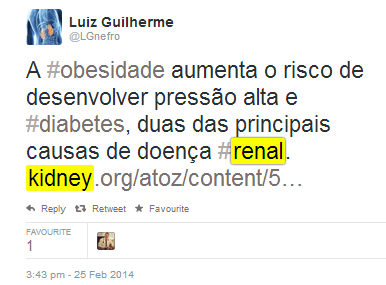 Translation: “Obesity increases the risk of developing high blood pressure and diabetes, two of the leading causes of kidney disease.” 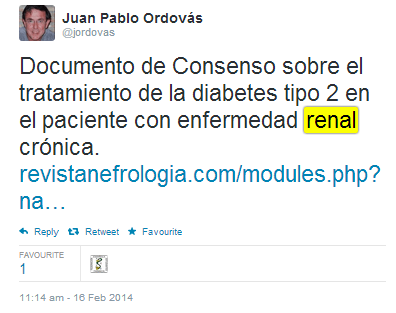 2. Clinical Questions and Conversations: HCPs reaching out to other HCPs across different cities or countries to get a second opinion or other similar assistance. See below for examples: 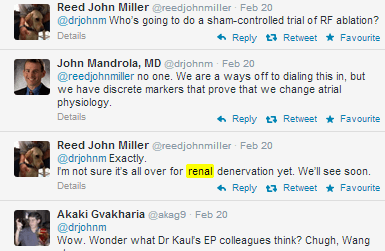 3. HCPs expressing an opinion about specific treatments and/or drugs. At times this includes tweeting about and from medical events. See below for examples: 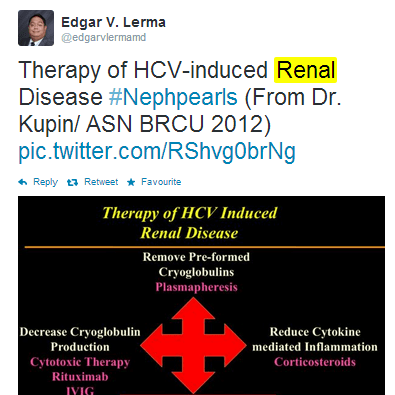 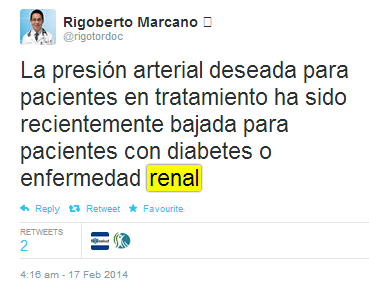