Research recently published in a post by Bernie Cognac on Kantar Media’s brilliant new blog caught my eye this week when John Mack reviewed Kantar’s data on physicians in social media and came to a somewhat different conclusion to Kantar’s, based on one of their charts which is reproduced below. 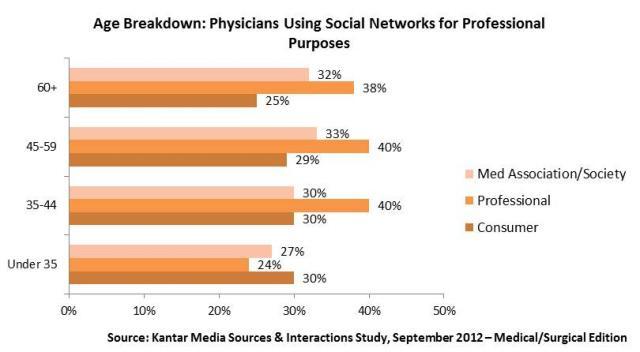 Mack’s argument is that Cognac’s implication that social media is increasing among physicians is only true for older, not younger physicians. The ‘elephant in the room’, I would suggest, is this: physicians aged under 35 are more likely to interact with a consumer social media channel than to use a professional network.

This data confirms the trend I have previously written about, that during 2012 we witnessed at Creation Healthcare a trend towards physicians increasingly using public social media channels to discuss professional, clinical and practice matters, and to collaborate with peers. What I had not seen to date was tangible evidence of the trend away from professional networks among younger physicians.
Photo credit: Jason A. Howie / Foter / Creative Commons Attribution 2.0 Generic (CC BY 2.0)